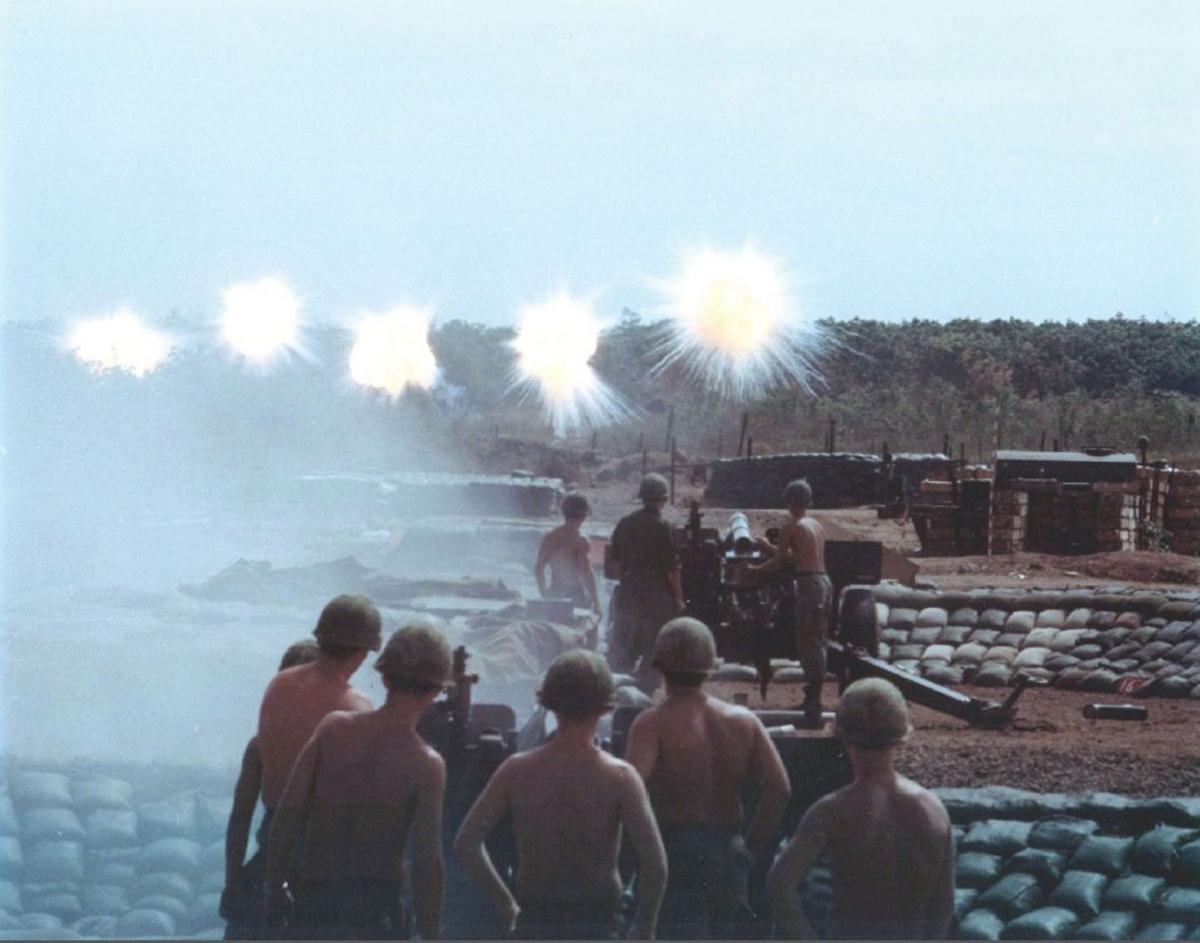 U.S. troops fire 105 millimeter howitzers similar to the guns in Dave Calhoun’s unit. Note the sandbag revetments around the guns. 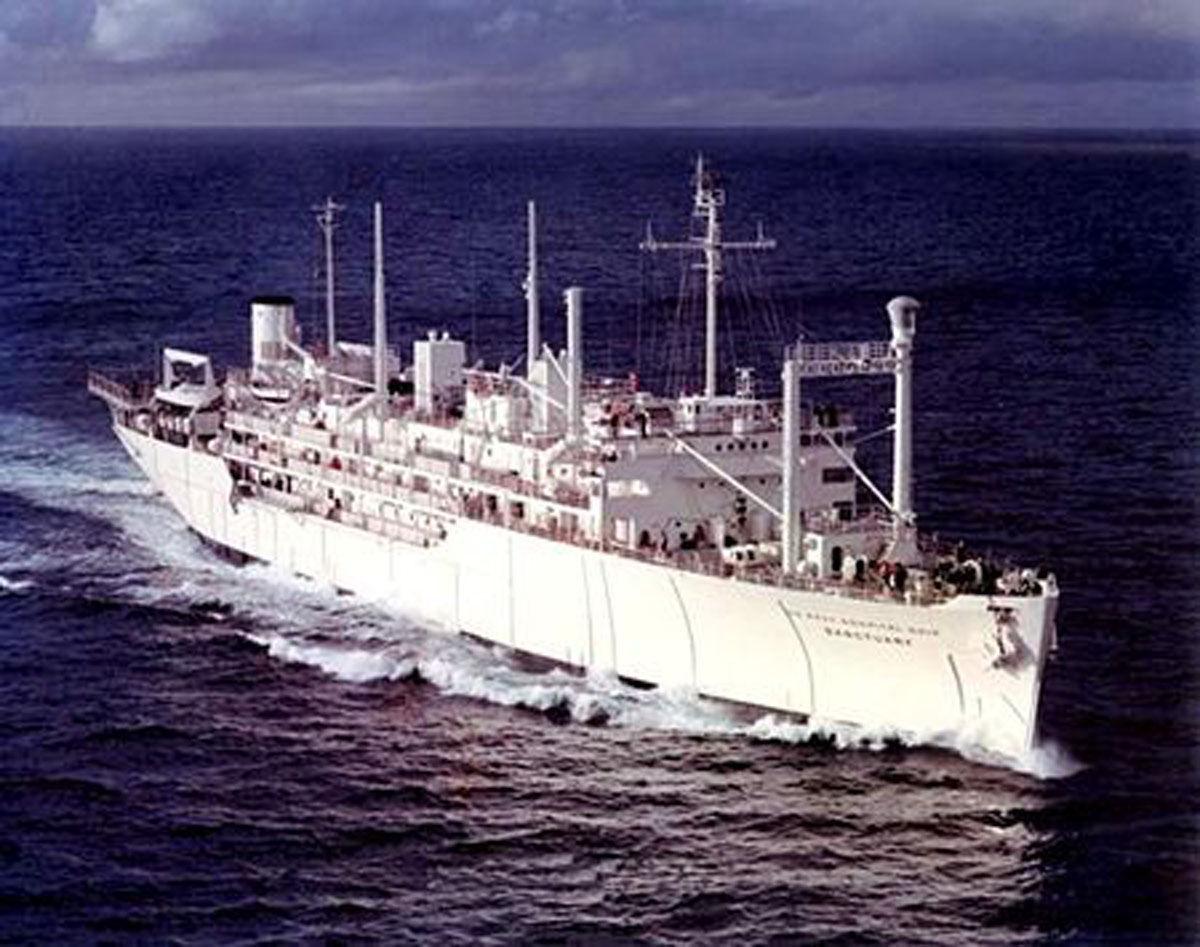 The USS Sanctuary (AH-17), the Haven-class ship where Dave was sent for treatment after he was wounded. 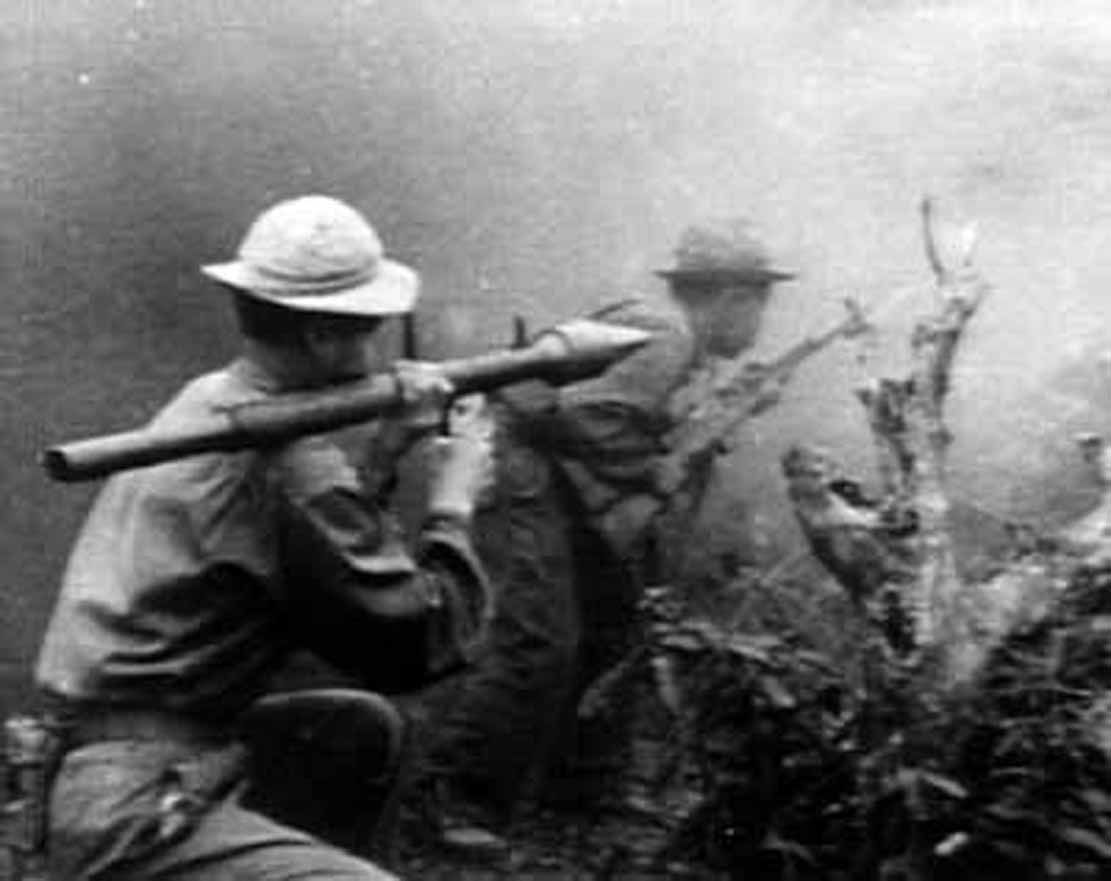 A North Vietnamese Soldier prepares to fire a B-40 rocket like the one that hit Dave Calhoun’s bunker. The rocket is a variant of the Soviet RPG-2.

Like many young men in the 1960s, Dave Calhoun joined the Army because he expected to get drafted.

“I started college when I was 15. I studied with the Jesuits," Calhoun said. "My mother wanted me to be a priest and an attorney. After a year and a half of school I decided that I like wine, women, and song, and really didn’t want to be a priest or an attorney. I joined the Army basically to get it over with.”

Calhoun enlisted in 1964 and took Basic Training at Fort Knox. As an Artilleryman, he served as an enlisted man through his first enlistment, then passed the officer’s exam during his second. In 1968, he received orders to go to Vietnam as an advisor.

“Flying into Tan Son Nhut, as we came up the coast we were met by American aircraft and escorted in," he said. "There were three of us seated together: there was an Air Force colonel in the center seat, a priest in the window seat, and I was on the aisle. The priest was looking out and said ‘Oh, what a lovely country with all the little lakes.' This colonel and I looked at each other, he leaned over and said, ‘Father, I hate to tell you, but those are bomb craters filled with water.’

"We landed at Tan Son Nhut in the middle of a shelling, the airbase was being mortared. They came aboard the aircraft quick, and told us to run off and get in the bunker."

Calhoun was assigned as an advisor for a South Vietnamese Artillery unit near the DMZ in the northern portion of South Korea, a posting that gave him some unusual opportunities.

“I got a chance to fly out to the New Jersey and was invited to a dinner. I enjoyed the Army, but boy, the Navy eats great. I had two steaks, a baked potato, two quarts of real milk, and ice cream. I had to pay for my meal by telling the officers aboard, the commander was a one-star admiral, about how I lived and what I did. I learned later on it was a subtle threat that they would be assigned to shore duty to live in a bunker if they messed up.

“We had a four gun battery. We would take on operations and they would be lifted out by Chinook. On some rare occasions they would be hooked right out of their revetments. Normally, as in the case of Fire Support Base Torch, they literally cut the trees off the top of a hill and we set the battery in there. From there we could traverse to almost any point to support Infantry units going out on search and destroy missions.”

“We were in Laos on an operation to support the Marines making a sweep," he said. "It was an extended operation. I had a Marine lieutenant with me. One of my sergeants was with me, but had to go back in the course of the operation. So it was only myself and the lieutenant, but he was wounded the night before we were overrun and was medevacked out.

“It was the only night, and I still blame myself, it was the only night I failed to check the wire. And what they had done was, the sleepers had cut the wire around the perimeter and had taped it back so it looked, from a distance, it looked like it was intact.”

“About 2300 hours we started taking a probe, and before I could react, my bunker, which was about three or four sandbags high, most of it was underground but there were about three or four sandbags above ground, I took two B-40 [rocket propelled grenades]. The first one blew up, it hit the wall and shrapnel came in, and I lost my hearing in my right ear, and took shrapnel.

"I was lying down, I was tired, it was a long day. I just had on my fatigue pants and socks, didn’t even have a shirt on. My boots were on the side of the ammo crates I was sleeping on. I remember getting up, I picked up the radio mike, gave my call sign and I said ‘I’m hit, I’m hit’. Then another B-40 hit and tore the radio from me and destroyed it, and I got hit again."

"... As I started to go out to get to the gun battery, to the FDC [Fire Direction Control] position anyway, because I knew the commander would probably be there, a rocket hit the wall there, and I had a piece of shrapnel blow into my chest, it struck the steel plates. I was out for a little bit, how long I don’t know. It hurt like hell, everything was ringing, and all kinds of noise. I remember going out and I immediately ran into an NVA. I looked him square in the eye. Having worked with and fired the AK-47, I know it’s a very reliable weapon, but apparently he forgot to change the magazine, and it was empty. I made it from there to a slit trench [latrine], I smelled terrible for a long while, to get my bearings. It seemed to be the only safe place.

“The NVA, there were literally individuals everywhere, there was close in fighting. I saw this PRC-77, a captured American radio. I didn’t have a radio, and he did. I needed it, he didn’t. So I got that radio, and I made it to one of the firing pits, basically you have the gun sitting and you have a sandbag perimeter to give it some protection. We had lost two of the guns and the other two, the barrels were depressed, we were literally doing direct fire.”

Calhoun said he knew he needed help if he was going to survive the night, so he made a desperate call for artillery fire.

"I put out a call, I said ‘I’m deaf, I’m under attack, if you can hear me, from my position’ and I gave an azimuth ‘give me some ranging rounds.’ The first two rounds came out, and I saw them amongst everything else that was exploding. Apparently they had fired HE [high explosive] and smoke, and I could see it bloom up. That was great, someone was really thinking back at the American unit that was supporting us. I walked the rounds in, danger close, because they had already breached the wire.”

“About 0600-0700 in the morning the Old Man sent his bird, his personal bird, the Black Cat came in. There had been an attempt to come in before but the fire was too heavy and they broke off. This time my Gunny, my Staff Sergeant, was on the bird, there were two birds, and pulled me aboard. I still have the pin from the last frag I threw in anger, I pitched it out as we were lifting out. I don’t think the other ship made it. I remember helping some wounded and some dead aboard the helicopters when my sergeant grabbed me and just literally dragged me on, and we got the heck out of there. That’s the part that I remember."

Calhoun was sent to the USS Sanctuary offshore for treatment. He was awarded the Bronze Star for his actions that night.

Later, in Germany, he ran into his old commanding officer, who gave him a photo that had been recovered from a dead NVA soldier after the base had been retaken. That’s when he learned that he had been specifically marked for death.

“The picture of me that was found on a VC sniper after the recaptured the base, was actually taken by Sgt. Trung, who was a part of the unit, but unbeknownst to me was a sleeper," he said. "I remember posing for the picture. Sgt. Trung had one of the Kodak Instamatics, and he would take pictures. I remember he called to me and I gave him a pose, and that was the picture that was later developed and fed to the NVA that overran our base.”

U.S. troops fire 105 millimeter howitzers similar to the guns in Dave Calhoun’s unit. Note the sandbag revetments around the guns.

The USS Sanctuary (AH-17), the Haven-class ship where Dave was sent for treatment after he was wounded.

A North Vietnamese Soldier prepares to fire a B-40 rocket like the one that hit Dave Calhoun’s bunker. The rocket is a variant of the Soviet RPG-2.