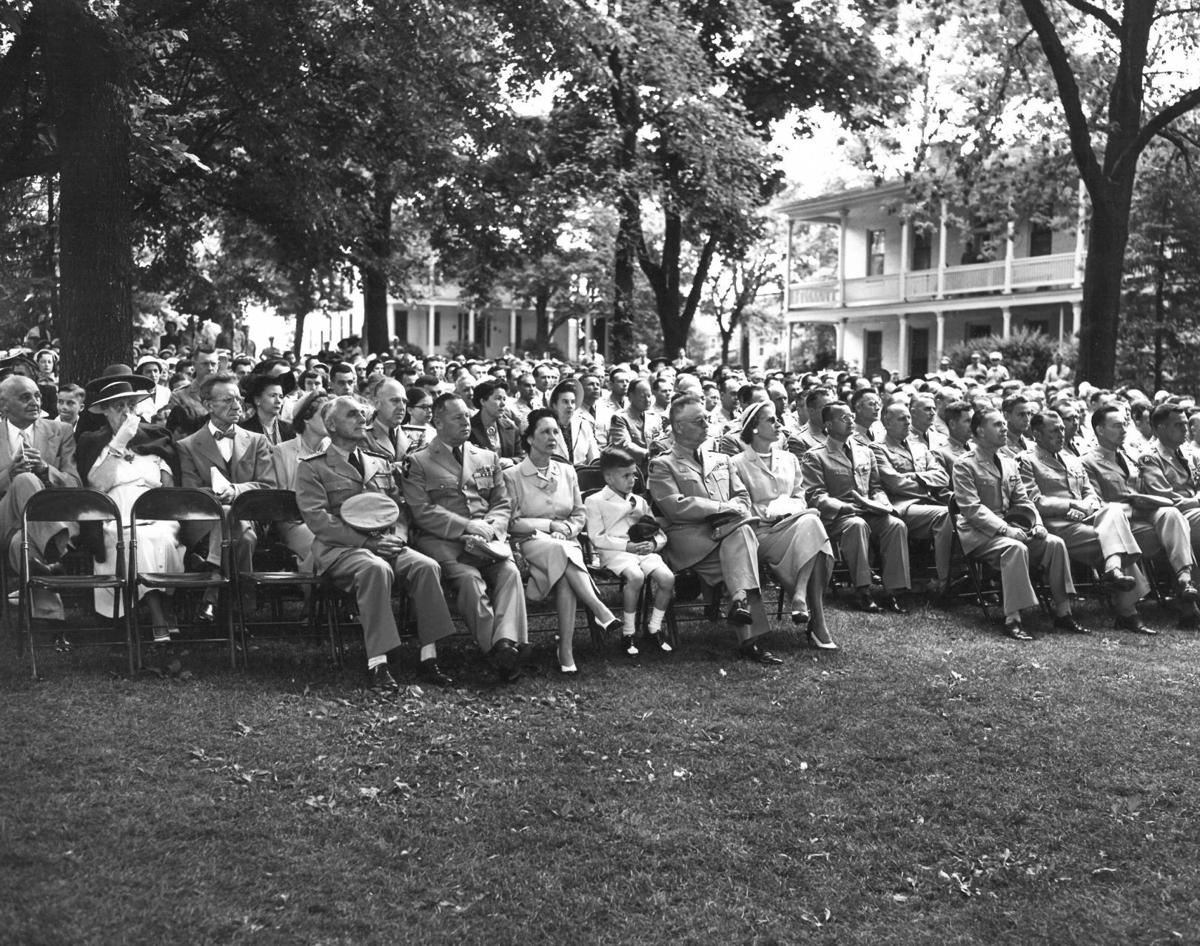 This photo from June 1952 shows the audience at the first graduation of U.S. Army War College students at Carlisle Barracks. 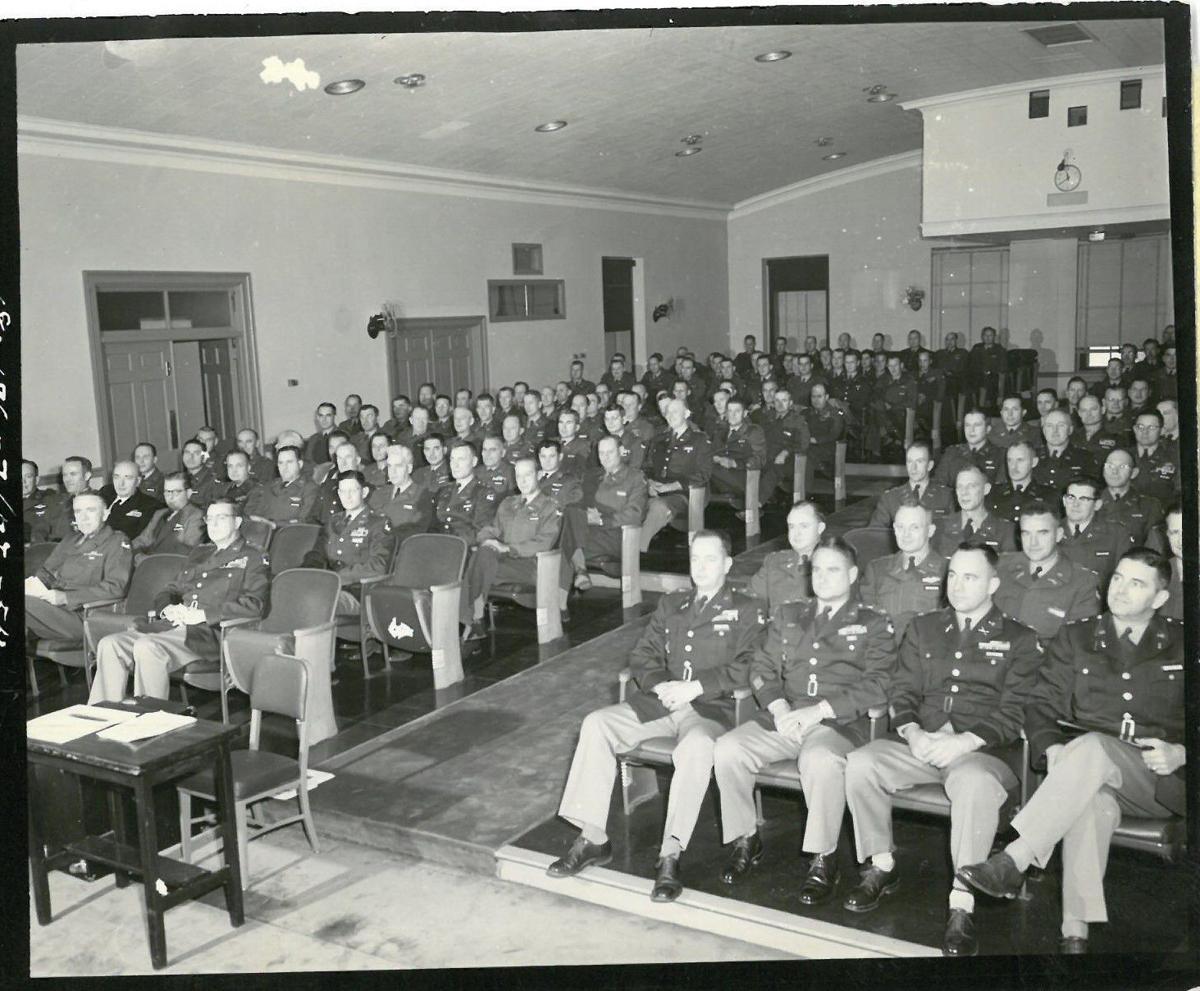 Students from the Class of 1954 participate in a lecture during the early years of the U.S. Army War College at Carlisle Barracks. 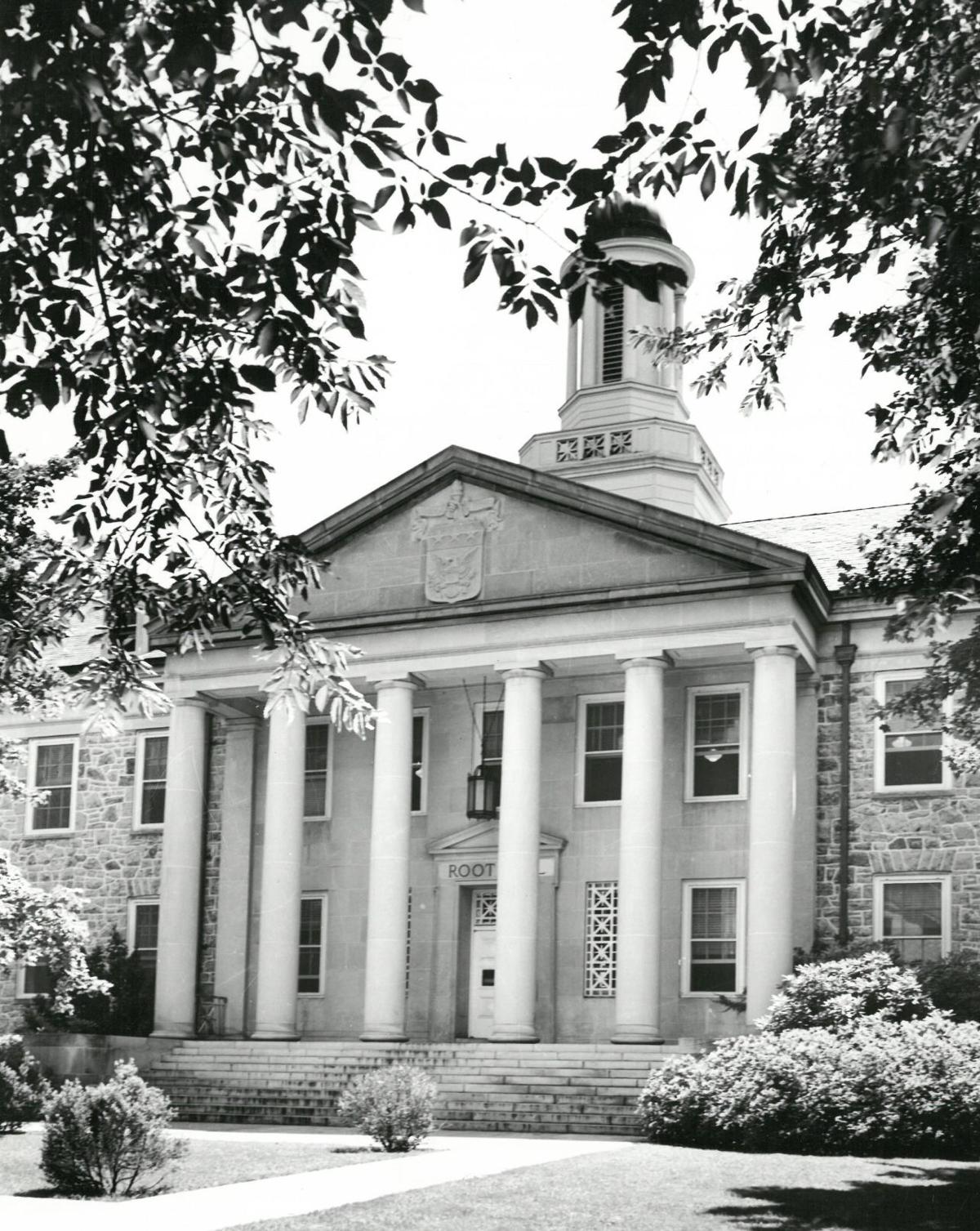 Present day Upton Hall served as the main academic building during the early years of the U.S. Army War College at Carlisle Barracks.

Up to that time, it was the largest budget in the history of the Carlisle Area School District.

The Sentinel reported on May 18, 1951, that school board members, meeting in a special session, had approved a preliminary fiscal plan of $742,670.

Included as a line-item was $50,000 in federal funding, the first appropriation for the children of U.S. Army War College students attending Carlisle schools.

Barely a year had gone by since the announcement was made that the senior college of strategic studies would move from Fort Leavenworth, Kansas, to Carlisle Barracks.

From the start, the news made district administrators nervous. They had no idea the impact the war college would have on enrollment numbers.

Then as now, war college students tend to be career military officers with families that stay with them during the 10-month course of study.

In late June 1950, board members passed a resolution to make every effort to obtain federal aid to expand school buildings in anticipation of a surge in new students.

Superintendent John S. Cartwright pressed the board to take action, saying the war college could bring 400 to 600 additional children of school age into the district by fall 1951.

That September, junior and senior high school enrollment grew by 103 students to 1,520 pupils in grades 7-12. Carlisle High School enrollment was at an all-time high due to the influx.

Elsewhere in Carlisle, the reaction was bittersweet but hopeful even though the war college would displace three military schools already operating on post — the Armed Forces Information School, the Army chaplains’ school and the Army Security Agency. The Sentinel had this to say in a June 19, 1950 editorial:

Inspire: Col. Michelle Ryan reflects on leadership in the age of COVID

“It’s always a regret to see old friends at the Barracks depart, but it is in accord with military life and practice. It has been observed that Carlisle Barracks itself seems to improve with age and that every new use to which it is put brings here its complement of men and officers who rapidly become a part of the community.

“These are not war times, and it is not to be expected that the number of officers and men at the Barracks will equal the high mark of the early 1940s, yet the barracks always will be an important station for the Army, well located near the capital and complete with modern equipment. Changes in use from time to time are to be expected and accepted.”

In an ironic twist of fate, six days after this editorial was published, North Korean forces crossed the 38th parallel into South Korea touching off a war that would influence the early course of leadership at the U.S. Army War College in Carlisle.

On June 23, two days before the invasion, President Harry Truman nominated Maj. Gen. Joseph M. Swing for a promotion to lieutenant general and designated him commandant of the war college during its transition from Fort Leavenworth to the Barracks.

Over the next year, few details emerged on what Swing was doing to prepare the post for the college. On Feb. 6, 1951, The Sentinel reported Swing and his staff members were scheduled to arrive at Carlisle Barracks late that afternoon.

Four months later, on June 21, 1951, Swing made his first and only official public appearance as the U.S. Army War College commandant during a showing of the pageant “Thy Name is Glory” as part of the celebration marking the bicentennial of Carlisle’s founding.

Less than three weeks later, on July 10, The Sentinel reported that Lt. Gen. Edward M. Almond had been assigned to succeed Swing as commandant. Known to soldiers as “Sic ‘Em Ned,” Almond commanded the 10th Corps in Korea, which made the northward advance to the Chinese border in fall 1950. Swing was given command of the U.S. Sixth Army based in Presidio, California.

On Nov. 14, 1950, The Sentinel reported that new sites had been chosen for the three schools displaced by the war college. By mid-April 1951, the information school and chaplains school were transferred to Fort Slocum, New York, while the Army Security Agency went to Fort Devens, Massachusetts. All three schools had been a part of the Carlisle community since the late 1940s.

A history in education

For much of its history, Carlisle Barracks has been the host site of schools with ties to the military. The post was known as Washingtonburg during the Revolutionary War.

Aside from serving as a major logistics base for the Continental Army, Washingtonburg was the site of a military hospital, a repair facility for muskets, a recruitment station for regular Army regiments and a military court that held trials for deserters and spies.

The Army opened its first school at Washingtonburg where it trained artillerists on the use, repair and maintenance of cannon. This was the start of a long line of educational institutions that also included the Army Cavalry School of Practice, the Army Medical Service School, the School for Government of Occupied Areas, the Adjutant Generals School and the Military Police School.

From 1879 to 1918, the post operated as the Carlisle Indian Industrial School that was founded by Army Capt. Richard H. Pratt as a social experiment to assimilate Native American children to the white man’s culture.

The U.S. Army War College was started in 1901 by Secretary of War Elihu Root. It was discontinued in 1946 when it merged with the National War College for the advanced education of senior officers in all branches of the military.

The U.S. Army War College was reestablished in 1949 in temporary headquarters at Fort Leavenworth, The Sentinel reported in June 1950. But conditions there were crowded since Leavenworth also housed the Command and General Staff College. This prompted a search for a new site that led to Carlisle Barracks.

It took the Army about a year to finalize the transfer of the college to the barracks. The Class of 1952 started in the fall of 1951 and graduated the following June.

“You will be running the Army in a few years,” Lt. Gen. John H. Hodge told the graduating class of 152 students. Hodge described that era “as the most tense period we have ever had” and warned the first Carlisle class of U.S. Army War College graduates that they are going to have to solve a lot of problems that are new to the world.

The typical war college class consists of mostly Army officers in active duty, reserves and the National Guard along with senior leaders from the other service branches and federal government agencies.

Stories of Honor: David W. Blackledge - Inspired to serve by his father and his rescuers

David W. Blackledge first developed an appreciation for military service while his family was on home leave in the U.S. the summer of 1940.

Maj. Gen. Stephen J. Maranian is back on the job of commandant of Carlisle Barracks and the War College after an Army investigation cleared him of any charges of abusive sexual conduct.

This photo from June 1952 shows the audience at the first graduation of U.S. Army War College students at Carlisle Barracks.

Students from the Class of 1954 participate in a lecture during the early years of the U.S. Army War College at Carlisle Barracks.

Present day Upton Hall served as the main academic building during the early years of the U.S. Army War College at Carlisle Barracks.