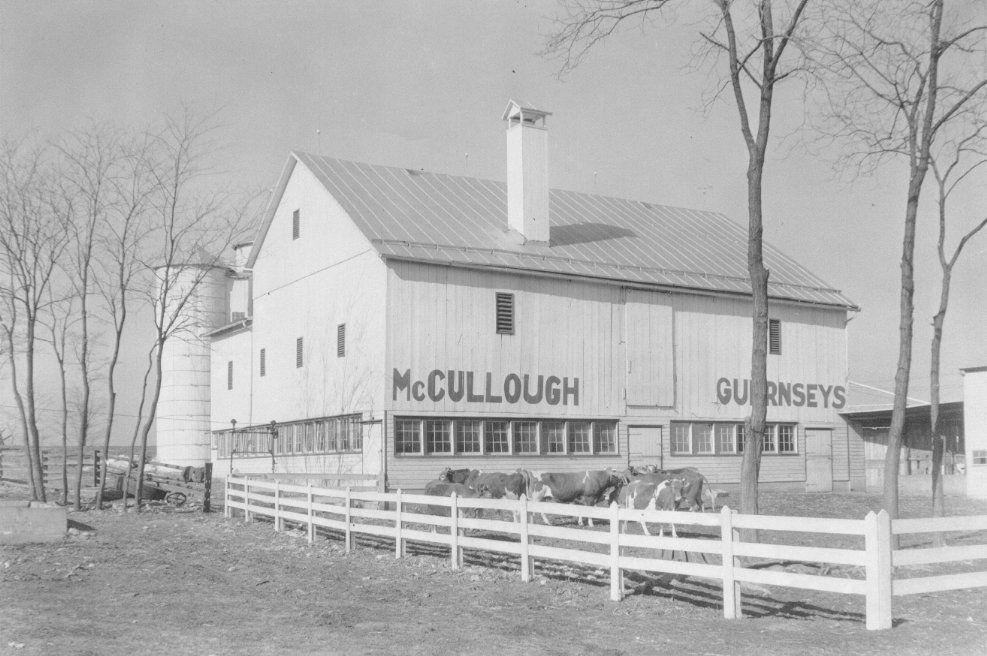 Agricultural extension agents worked with local farmers to control the spread of Bang's Disease. This photo from the 1930s shows the McCullough farms, one of the success stories. 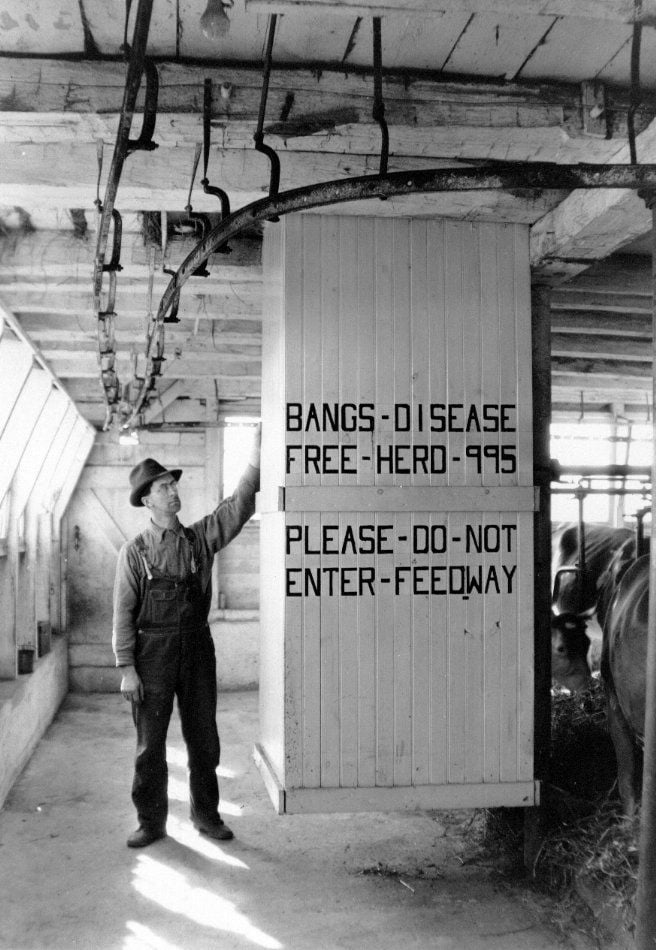 This farmer from the 1930s shows off a sign reading that his dairy herd is free of Bang's disease.

In the lead-up to World War II, Cumberland County was on the front-line of a battle against Bang’s disease.

The Penn State extension office was working closely with local farmers to control its spread in the dairy herds.

“In its mild form the disease resembles influenza but severe cases are similar to typhoid fever, tuberculosis, malaria or rheumatism,” the article reads. “Victims of this disease become constipated, irritable and suffer from severe sweats and headaches.

“The most distinguishing feature of the disease is a fever, which slowly advances during the forenoon, sweeps over the patient with the greatest intensity from 2 to 5 in the afternoon and gradually recedes in the evening,” the newspaper reported. “The fever usually lasts six weeks.”

While rarely fatal, Bang’s disease was tied to health complications related to a weakening of the heart muscle. To prevent its spread, the state and federal government implemented a program where cows were tested and then eradicated if blood samples turned up positive results.

In 1937, state lawmakers passed legislation authorizing the Department of Agriculture to pay indemnities to farmers to compensate them for the loss of cattle. As of September 1938, compensation from state and federal sources amounted to about $1.86 million, according to The Sentinel.

As an additional preventative measure, the government imposed rigid safeguards on raw milk production as supervised by the Bureau of Milk Sanitation of the Pennsylvania Department of Health.

There were almost 2,000 cases of Bang’s disease reported in Pennsylvania from January to late September 1938, The Sentinel reported. This was twice as many as what was reported in 1937.

Tour Through Time runs every Saturday in The Sentinel print edition. Reporter Joseph Cress will work with the Cumberland County Historical Society each week to look at the county through the years. Send any questions, future ideas or tips to jcress@cumberlink.com.

Tour Through Time: Arson suspected in 1909 fire that destroyed the Letort Axle Works

The pattern shop may as well have been a furnace with all its crates of wooden parts fueling the inferno at the Letort Axle Works in Carlisle.

Tour Through Time: Blizzard a century ago buried Carlisle and collapsed roofs

Agricultural extension agents worked with local farmers to control the spread of Bang's Disease. This photo from the 1930s shows the McCullough farms, one of the success stories.

This farmer from the 1930s shows off a sign reading that his dairy herd is free of Bang's disease.