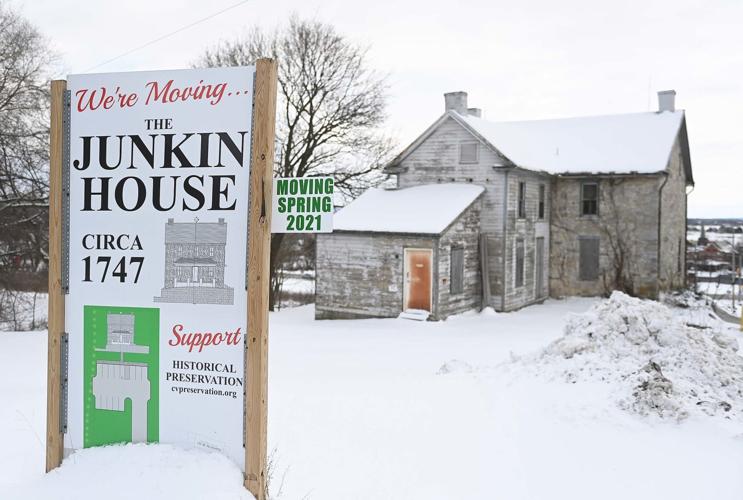 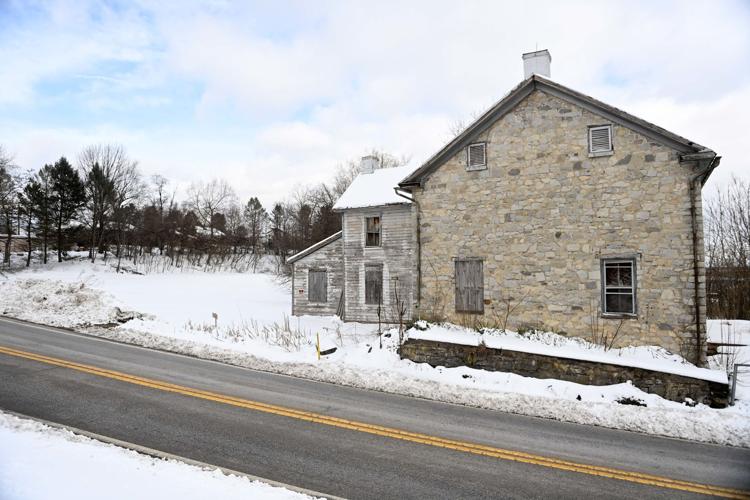 The Junkin House will be moved to an adjoining field in Silver Spring Township. 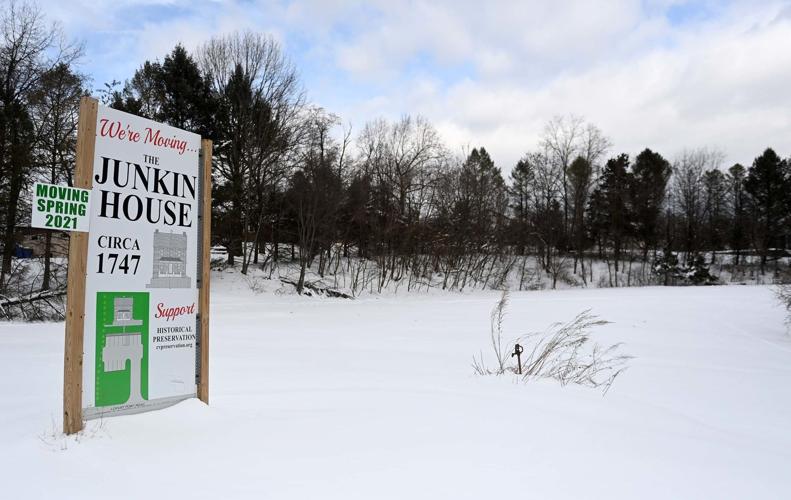 Plans are in the works in Silver Spring Township to move the Joseph Junkin Sr. House onto an adjoining lot so that it can be restored and developed into a local history and cultural event center.

An early settler in the township, Junkin and his wife hosted a tent service on Aug. 23, 1752, that included the first communion in the New World for followers of the Covenanter faith, now the Reformed Presbyterian Church.

Society members have been working the past 10 years to relocate the Junkin House to more stable ground away from the roadside and the risk of the building getting hit by a vehicle, Hrzic said. An underground spring, a cistern and an old septic system make the current location too unstable to risk the expense of restoring the vacant building, he said.

The society has hired Wolfe House & Building Movers of Bernville, Berks County, to move the stone building north 150 feet and place it on a new foundation planned for the one-acre lot donated by the trucking company.

Though scheduled for March, the move could be pushed back to May or June to allow more time to complete a geotechnical survey and for the design and construction of the foundation, Hrzic said. The survey is needed to verify the stability of the ground along the route between the current building location and its proposed location, he said.

Everything will be cleared out of the basement so that Wolfe Movers can bring in equipment to lift the stone house from its old foundation, Hrzic said. The first floor, second floor and attic will then be mounted on rollers for the trip.

Once in place, plans are to develop the downstairs into a museum with rotating exhibits that will be open to the public. The upstairs will be converted into a library and research center for visitors to learn about state and local history.

“We want the house to be utilized,” Hrzic said. “It will be an enhancement to the county and township. We’re going to have history manuals and books. We have some artifacts that were provided by a local historian.”

There will also be office space upstairs for groups such as New Kingstown Vision and the Hogestown Heritage Committee. “This is a Silver Spring thing so almost everybody is on board,” Hrzic said. “The township has been absolutely great every step of the way.”

From the start, township supervisors and staff members have been in contact with preservation society members. The project has cleared all the necessary reviews and approvals. Hrzic also has been in contact with local police departments in anticipation of crowd control and the road closures that will be necessary to allow the work crew to move the building.

Junkin House was an early investment by namesake in New Kingstown

The building’s move could draw a crowd. While good for publicity, the society has to be mindful of any restrictions on large gatherings due to COVID-19, Hrzic said. “We have to be very careful that we don’t violate anything. We could raise a lot of money when we do the move.” One idea is to publicize it virtually.

“It’s going to be a cultural center for people to do outdoor programs,” Hrzic said. Events could include classes and demonstrations by artisans.

Christine Musser is a local historian and author who recently earned a master’s degree in historic preservation and cultural resource management from Shippensburg University. “It’s long in coming,” she said of the plan to move the Junkin House. “It’s a really great opportunity.”

Once developed, the project will be a great tourism site to promote local history in eastern Cumberland County, Musser said. “Wolfe is known for moving buildings like this. They are very experienced and come highly recommended by preservationists.”

Years ago, Musser was among the local residents who tried to save the historic Bell Tavern from demolition. Though that effort was unsuccessful, Musser is in favor of using stone salvaged from the tavern to build the amphitheater.

“In a way, it carries on what occurred at the tavern in the 18th century,” Musser said. The tavern might have played a key role in the development of the U.S. Constitution and Bill of Rights.

Tavern owner James Bell was a Covenanter who worshipped with the Junkin family. There were even worship services that took place on the James Bell property, Musser said.

There is also a plan to landscape and plant gardens around the relocated Junkin House. A parking lot will be included in the early stages of the project along with fencing to divide the lot from the trucking company terminal.

So far, between grants and donations, the Preservation Society has raised about $135,000 of the estimated $500,000 it needs to complete the project, Hrzic said. This includes the contract price of $82,000 to move the house.

A capital campaign is underway to raise $50,000 by June 1. To make a contribution, visit the Preservation Society website at cvperservation.org. The nonprofit society also has merchandise for sale including ink drawings of the house along with replicas of the type of tokens worshipers used to gain access to the tent service and the first communion in the New World.

Until recently, fundraising has been a challenge for the Preservation Society because it didn’t own either the Junkin House or the adjoining lot. Recently, the organization has settled on the ownership of both the house and the lot, which were donated by the trucking company.

Even with the property settlement, society members are limited in the ability to host fundraising events because of the social distancing safety protocols in place to slow the spread of COVID-19.

One idea being explored is to sell commemorative bricks that would serve as pavers for a planned walkway between the relocated house and the amphitheater. The hope is to open the house up for tours within a year of its placement on the new foundation.

Aside from money, the society is accepting volunteers to help with the project. Already, there are tradesmen lined up to donate their time towards carpentry, plumbing, electrical and masonry work along with the installation of a security camera system.

For now, the emphasis is on moving the house to its new location along with the installation of the parking lot and the fence.

The Sentinel has compiled a collection of profiles looking at some of Cumberland County’s oldest buildings that are still standing today.

Starting Oct. 19, one profile will run in The Sentinel print edition every day over the next two weeks. The Building Blocks of History collection will be updated each day online as well at cumberlink.com

Many 18th century structures have fallen into disrepair or been torn down over the years, and they have not been included on this list. Information from that era is limited and precise dates of construction can be difficult to pinpoint.

The history of the Ironmaster’s Mansion at Pine Grove Furnace State Park in Gardners traces back to an industrious era in Cumberland County.

Most of East Pennsboro Township was farmland until the 20th century. The Peter Boyer House represents some of the only agricultural architectu…

The construction of Dickinson College’s Old West, located at 272 W. High St. in Carlisle, began in May 1803 when architect Benjamin Henry Latr…

The Frankenberger Tavern has undergone extensive renovations since it was constructed, but today has largely been restored to its original condition.

By the time of his death in 1790, Matthew Miller had acquired nearly 600 acres of land in Middlesex Township and at least another 1,000 acres in and outside of Pennsylvania.

James Moore Tavern, also known as Cumberland Hall and the Stone Tavern, was built by James Moore in 1788.

Children’s Lake in Boiling Springs has been used as a recreation spot for centuries. As far back as 1875, a local man named Robert Wise operat…

The Meeting House of the Silver Spring Presbyterian Church was built in 1783. It underwent several renovations and was restored to its origina…

In the 18th century, the Carlisle area was the site of a major logistics base for the Continental Army during the Revolutionary War.

The Great Stone Mansion of Jonas Rupp at 5115 E. Trindle Road has been a fixture in Hampden Township for more than 200 years.

Laughlin Mill is the first mill to be built on Big Spring Creek and is the only mill still standing on the waterway. It represents the town’s …

The McCormick Home Farm is known to date back to 1762, when it was first assessed to Thomas McCormick. The farm house exhibits design features…

The small stone building that sits off Dickinson Avenue beside First United Church of Christ in Carlisle is known locally as “the Butler Gun Shop.”

Tour Through Time: Grassroots effort was behind Soldiers' Monument on The Square

A call to action in 1867 led to a four-year grassroots effort to raise money for the Soldiers Monument on the Square in Carlisle.

With malice toward none: The Murphy meetings in Carlisle

In October 1886, a nationally known speaker showed up in Carlisle to advocate against alcohol and to convince people to sign an abstinence pledge.

Preparations are underway in Silver Spring Township to move the historic Joseph Junkin Sr. House to an adjoining lot within the next 60 to 90 days.

Cumberland Valley Preservation Society has been working the past 10 years to relocate the historic building to more stable ground away from the roadside and the risk of it getting hit by a vehicle.

An ‘Independent’ party could dominate American politics, according to study

Russian attacks around the Ukrainian town of Vuhledar

Russian attacks around the Ukrainian town of Vuhledar

The Junkin House will be moved to an adjoining field in Silver Spring Township.