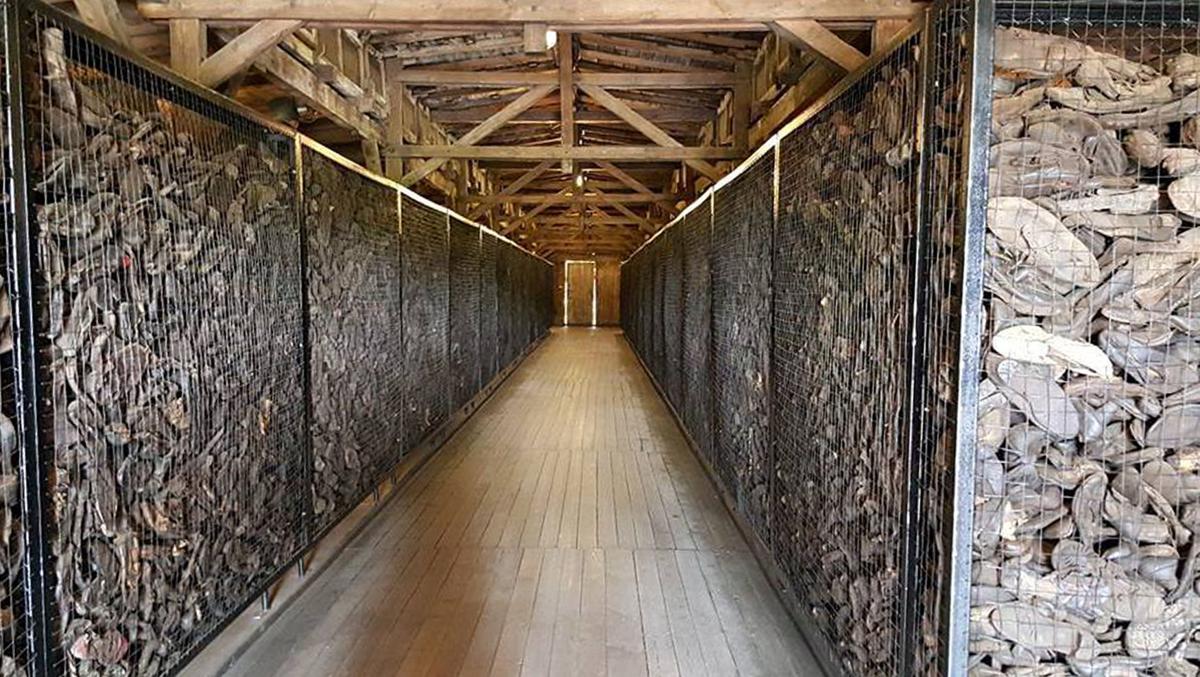 Kevin Wagner of Carlisle recently toured Holocaust sites in Europe. Seen here is a large collection of shoes from the victims of the Majdanek camp in Poland. 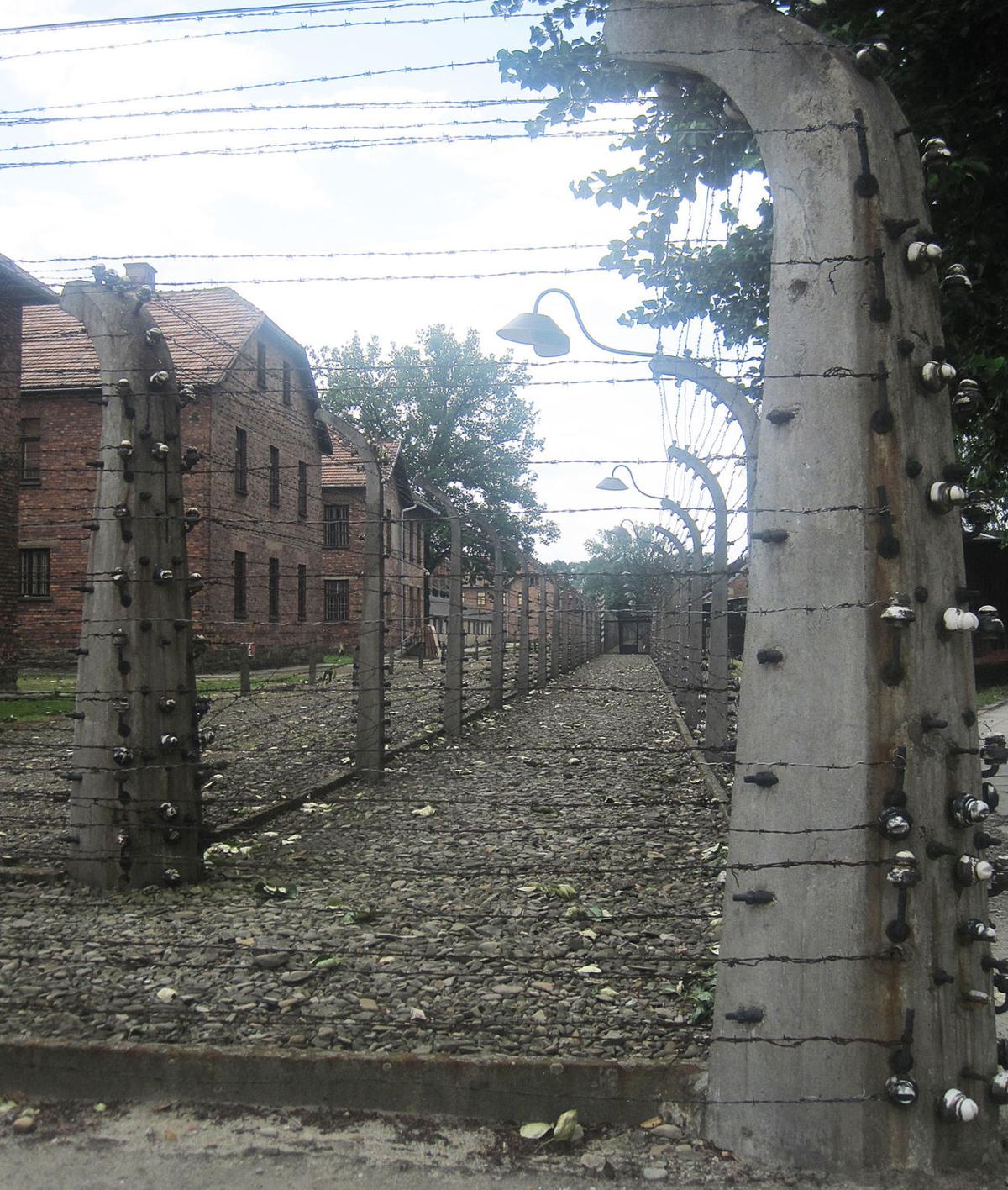 Kevin Wagner of Carlisle recently toured Holocaust sites in Europe as part of a summer seminar. Seen above is a portion of the security fence remaining around the Auschwitz memorial in Poland. 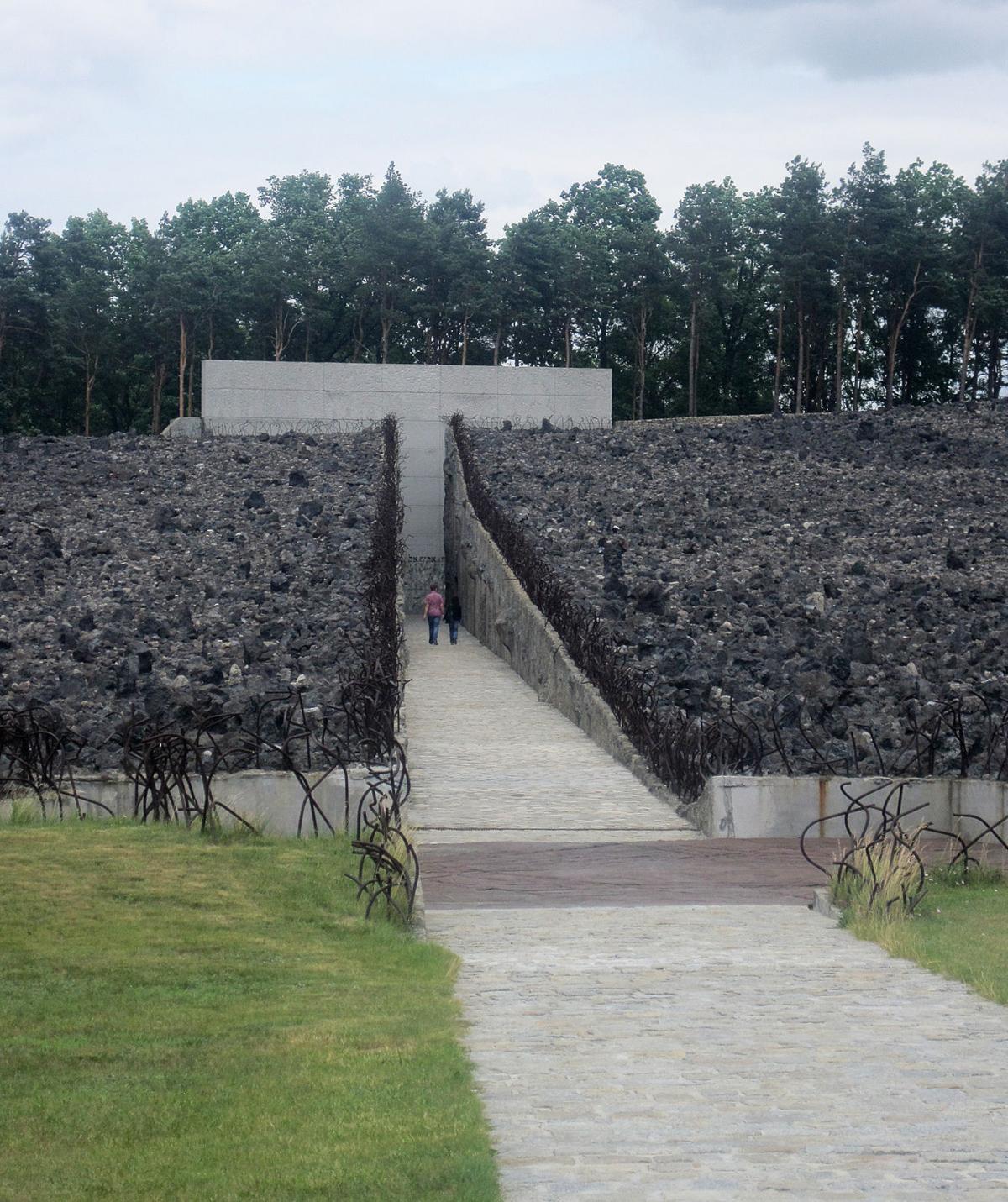 Kevin Wagner of Carlisle recently toured Holocaust sites in Germany and Poland. Seen here is the memorial at the Belzec death camp. 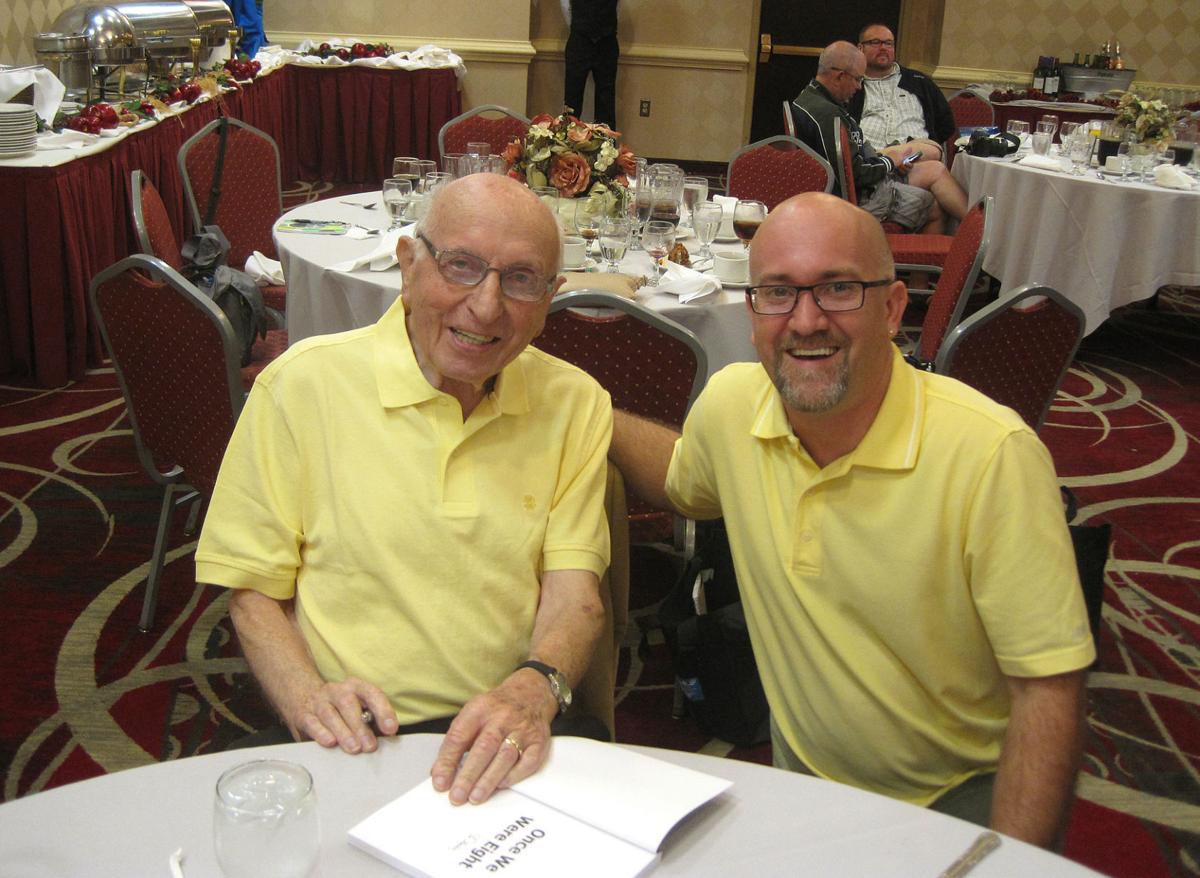 Kevin Wagner, right, a Carlisle High School teacher, recently toured Jewish heritage and Holocaust memorial sites in Germany and Poland. Before leaving for Europe, he attended an orientation session with author Raymond Fishler, left, an author and survivor of Auschwitz and the Krakow-Plaszow work camp.

Knowing what was behind the glass made it all so surreal.

Kevin Wagner of Carlisle was told heading into the room that no photography was allowed; that the contents were considered holy by Jews.

There piled high from floor to ceiling was a mound of human hair shaved from the heads of men, women and children doomed to suffer an untimely death in the gas chambers of Auschwitz.

It was a co-mingled mass of strands colored black, brown and red with some even done up in braids. It was way too much to process…way too much to take in at once. Overwhelmed, Wagner broke down and cried while two others in the group left the room unsettled by the sight of so much lost humanity.

“How could another human being do this to somebody?” recalled Wagner, social studies program chair for the Carlisle Area School District.

“It was methodically efficient,” he added. “You can’t wrap your head around how someone can come up with that.”

Wagner was one of only 26 teachers and museum curators from across the country hand-picked to participate in the summer seminar of the Holocaust and Jewish Resistance Teacher’s Program. From June 30 to July 14, he was immersed in the history of the Final Solution, the initiative by Hitler’s Third Reich to systematically destroy the Jews of Europe.

Each year, the seminar brings Jewish and non-Jewish teachers to an orientation within the U.S. where they meet survivors and second generation, along with scholars and experts in Holocaust studies. The group then travels to Holocaust and Jewish heritage sites and memorials throughout Germany and Poland. One day they visited what remains of the twin death camps of Auschwitz-Birkenau where 1.1 million men, women and children perished.

“They hated the Jews so much they took things off the person,” Wagner said of the Nazis. Hair from death camp victims was routinely made into industrial felt or spun into yarn. But there were other scenes of horror, revulsion and reflection on a tour that left Wagner emotionally drained, but gave him a whole new appreciation for the importance of teaching the Holocaust.

“There is good and evil in Man, that is what we must accept about life on this planet,” Wagner said. “You cannot crawl into a hole and never expect to be confronted by evil. All children should be taught that they will be confronted by evil in some form and to be prepared to stand up and defeat it or be crushed by it.”

The room after the hair was stacked high with piles of suitcases. Some opened. Some closed. Many had the names of people and places written in what appeared to be chalk. “I just wanted to stay there and read every name and town,” Wagner recalled. He thought by doing so he could somehow attest to their lost humanity and to prove that though they are gone, they are not forgotten.

But time was pressing. There was another room to visit and this one was the most disturbing of them all for inside were the toys and clothing of children. The scene hit Frank Curtin especially hard.

“He had just found out he was going to be a father,” Wagner said of his friend, a teacher from Hartford, Connecticut. “Frank broke down. There were a lot of hugs when people needed it.”

By then, a close bond had formed among a group of former strangers. They gathered every night to decompress and process the raw emotions that came with every memorial and heritage site. Prolonged exposure to memories of the Final Solution was taking a toll, but it was making them better equipped to teach others the history of what had happened. At one point, they even got testy with one another.

Common themes emerged as they shared what they were feeling. One day, the group visited Ravensbruck, a Nazi concentration camp specifically designed to house women and children. There they saw their first crematorium housed in a building on the edge of a lake within view of a nearby town and the steeple of a Catholic church. The implications of this scene angered many including Wagner.

“Why didn’t those people in that town do anything?” he asked. “They had to know what was going on. We could see the town. Knowing the smell…How could they not know? There were towns within sight of most of the camps. We just kept asking ‘Why didn’t they do something.’”

There were individuals who took action and managed to save lives. While in Kracow, Poland, the group visited the factory and office of Oskar Schindler, a German industrialist whose story was made famous by the 1993 Academy award-winning film Schindler’s List. Doing the work meant dealing with black market purchases and bribing Nazi officials to release the Jews into his custody so they could be put to work as labor in his factory.

“His methods to you and I may not win approval, but the methods he used saved lives,” Wagner said of Schindler. “He was one individual willing to take that risk.” Following his death, Schindler was named Righteous Among the Nations, an honor bestowed upon Gentiles who risked their lives to save Jews from the Holocaust.

His factory and office is now a museum that includes photographs of many of the 1100 Schindler Jews peering out from the windows. “It was really quite moving,” said Wagner adding many of the memorials and heritage sites were designed to evoke strong emotion.

As World War II in Europe drew to a close, the Red Army of the Soviet Union was advancing rapidly from the east. Eager to hide evidence of the Holocaust, the Nazis burned to the ground the death camp at Belzec.

Wagner described that memorial as a lunar landscape on a slope with a center path where visitors walk down a ramp to a wall carved with hundreds of Jewish surnames. The further Wagner descended, the more confining the space until he felt as though he was about to suffocate.

The group also toured what remained of the death camp at Majdenek. Towards the rear of the site was a huge round concrete building with a circular walkway that took Wagner to an observation platform where he could look out and see a mound of human ash some 50 yards across with bone fragments scattered here and there.

At every site, seminar group members lit ceremonial candles and recited the mourners Kaddish, a Jewish burial hymn. Elaine Culbertson, the leader of the group, shared stories handed down to her by her parents, who were both Holocaust survivors.

Culbertson’s mother was on a work detail one day from the Auschwitz death camp. her sister were ordered by a guard to fetch a cauldron of broth that was to be the noon meal. Culbertson’s aunt slipped and fell spilling the broth and drawing the attention of the guard who killed her right in front of Culbertson’s mother who swore she no longer wanted to live after witnessing such a trauma. “A 30-year-old woman took her under her wing and kept her alive until the camp was liberated,” Wagner said.

The Holocaust is taught in two grades at Carlisle High School. Ninth grade U.S. History touches on the experiences of American GIs who helped to liberate the camps. Tenth grade World History spends 15 days on World War II with four to five days focused on the rise of Hitler and Nazism and the emergence of the Final Solution.

Going forward, Wagner plans to teach his students to think about how various factors contributed to the Holocaust and not to oversimplify what is really a complex history. He also wants his students to avoid comparisons of pain.

“One cannot presume that the horror of an individual, family or community destroyed by the Nazis was any greater than that experienced by the victims of other genocides,” Wagner said.

Above all, the most important lesson is to examine the Holocaust not in terms of numbers or grim statistics, but to look at the individual stories that came out of it — the diversity of personal experiences within a larger historical context, Wagner said. “My students will probably leave with more questions than we have answers.”

Those who have witnessed the worst of humanity have the most hope for mankind.

Canadian author Margaret Atwood gets her own stamp

Canadian author Margaret Atwood gets her own stamp

Kevin Wagner of Carlisle recently toured Holocaust sites in Europe. Seen here is a large collection of shoes from the victims of the Majdanek camp in Poland.

Kevin Wagner of Carlisle recently toured Holocaust sites in Europe as part of a summer seminar. Seen above is a portion of the security fence remaining around the Auschwitz memorial in Poland.

Kevin Wagner of Carlisle recently toured Holocaust sites in Germany and Poland. Seen here is the memorial at the Belzec death camp.

Kevin Wagner, right, a Carlisle High School teacher, recently toured Jewish heritage and Holocaust memorial sites in Germany and Poland. Before leaving for Europe, he attended an orientation session with author Raymond Fishler, left, an author and survivor of Auschwitz and the Krakow-Plaszow work camp.