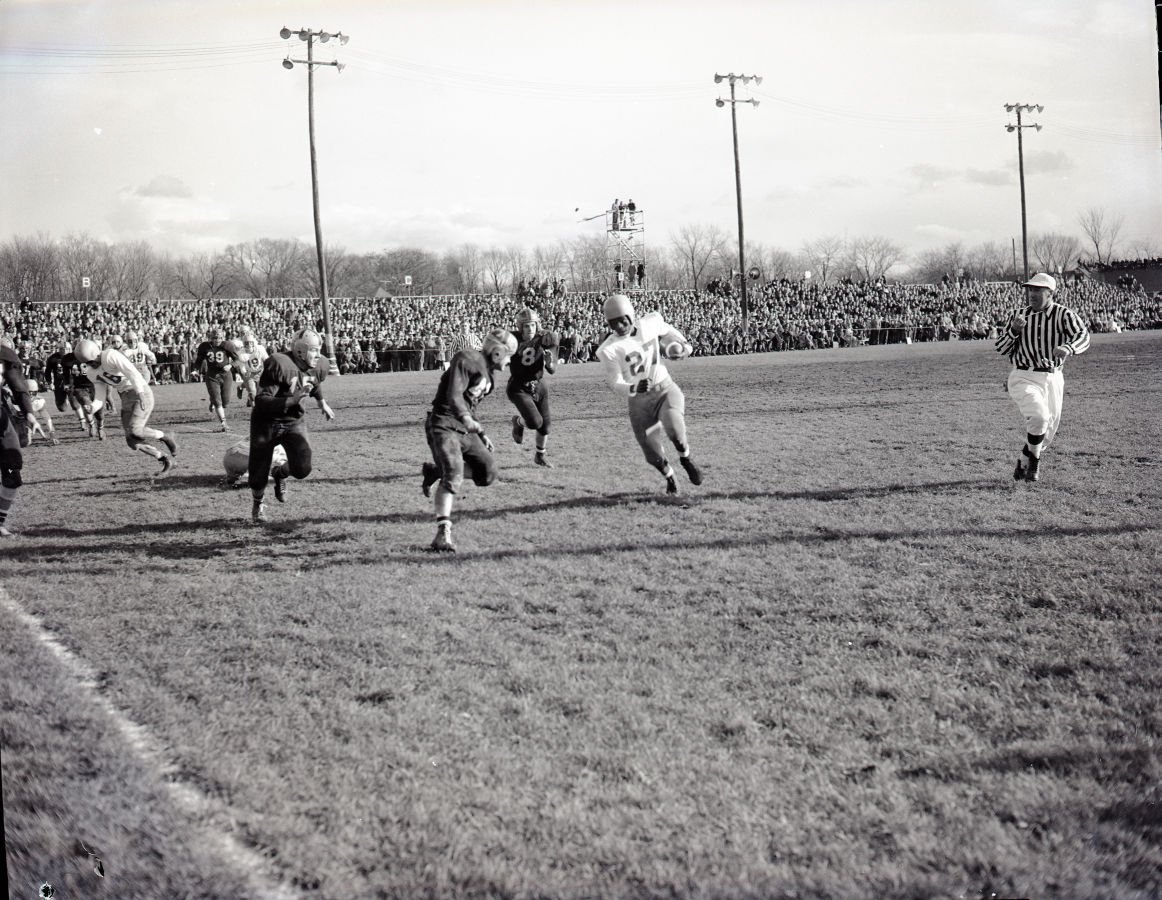 Senior fullback Clyde Washington (27) makes a play for the Carlisle Thundering Herd during a 1955 season game. 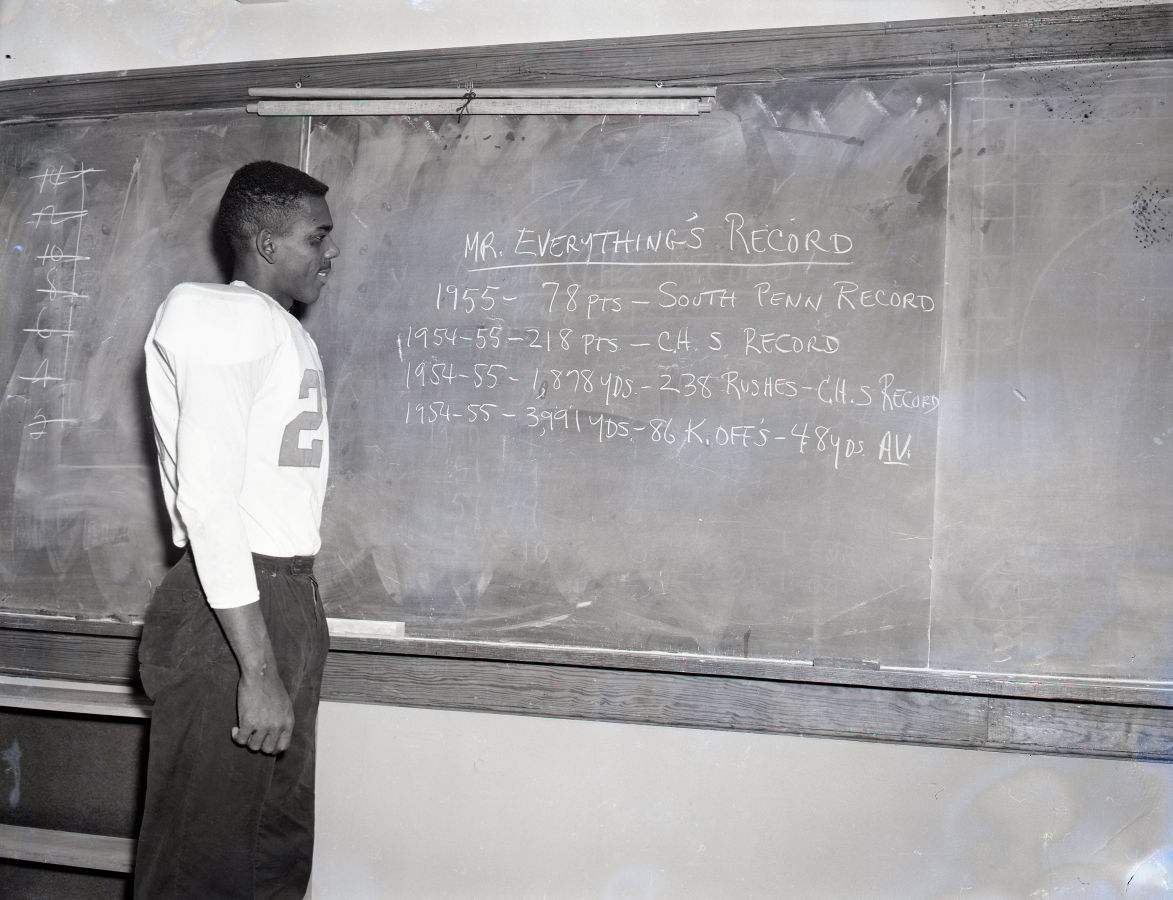 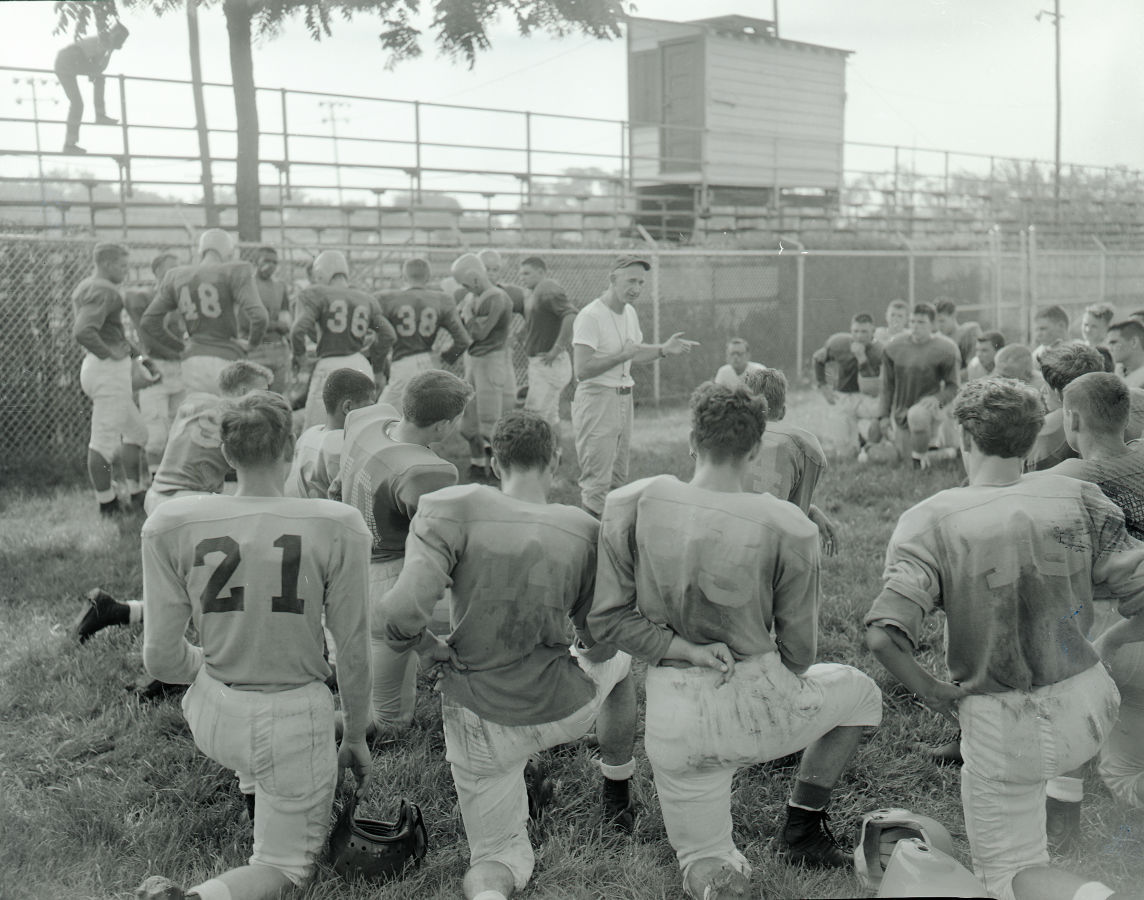 Carlisle football coach Ken Millen talks to some of the members of the 1955 Thundering Herd team.

Fans and sports writers dubbed him the “Triple Threat,” “Mr. Everything” and the “greatest all-around player ever to wear the Green and White of Carlisle High School.”

Sixty years ago, Clyde Washington was the star of the Thundering Herd football team in its stampede of 10 victories in the 1955 season that earned them the coveted Southern Pennsylvania Conference championship. The stellar season earned Washington a spot on the first team of the United Press All-State Football Team. It was the first time in the history of the Carlisle school district that a Thundering Herd athlete had received such a distinction.

Like other native sons of Cumberland County, the senior fullback took his talent down field and scored with success not only in college but also in professional football.

Highly sought-after for his talent, Washington signed on with Purdue University, graduating from there in 1960 before playing five seasons as a cornerback and defensive back with the American Football League with the Boston Patriots from 1960 to 1961 and the New York Jets from 1963 to 1965.

After his retirement, Washington worked as the assistant director of player personnel for the Jets before landing a job as assistant coach at the University of Pennsylvania. He was 36 years old when he died in Carlisle on Dec. 29, 1974.

The Boiling Springs Bubblers had a star player in quarterback Jim Foote who led an undefeated 1968 team to the Blue Mountain League championship. A Delaware Valley College graduate, Foote went on to play a season with the Houston Oilers.

The Bubblers had their closest game of the season on Oct. 12, 1968 when they defeated the Blackhawks 14-13.

A month later, on Nov. 8, 1968, the Bubbler team defeated the Littlestown Thunderbolts in a 13-7 win that clinched the league championship. The Adams team led the game 7-6 with only seconds to go in the third quarter. The Bubblers had moved the ball to the Littlestown three-yard line. On the first down, Foote, on the quarterback sneak, took the ball in for the touchdown giving Boiling Springs the edge and eventual victory.

Below is a list of some of the Cumberland County natives who went on to play professional football:

Stan Gelbaugh – A Cumberland Valley High School graduate, Gelbaugh played football for the University of Maryland. He was a quarterback for the Buffalo Bills during the 1986, 1988 and 1989 seasons before moving to the Phoenix Cardinals in 1991 where he completed 61 passes for 674 yards, according to NFL statistics. Gelbaugh then played with the Seattle Seahawks from 1992 to 1996 with his best year being 1992 when he completed 121 passes for 1,307 yards.

Jon Ritchie – Born in Harrisburg, Ritchie graduated from Cumberland Valley High School in 1993 after leading the Eagles to a state championship the previous fall. He attended Michigan University as a freshman and sophomore earning the Academic All-Big-10 in 1994. Ritchie graduated from Stanford University in 1998 where he was recognized as a First-Team Academic All-PAC-10. He played fullback in the NFL with the Oakland Raiders from 1998 to 2002 and with the Philadelphia Eagles from 2003 to 2004. In his final reason with the Raiders, he started in Super Bowl XXXVII.

Lee Woodall – A Carlisle native, he played football for West Chester University before signing on as a linebacker for the San Francisco 49ers in 1994. His rookie year the 49ers won Super Bowl XXIX when they defeated the San Diego Chargers 49-26. Woodall played another seven seasons with the 49ers from 1995 to 2001.

Kyle Brady – A Cedar Cliff High School graduate, Brady played football for Penn State. His career as a tight end spanned 13 years from 1995 to 2007 and included four seasons with the New York Jets, eight seasons with Jacksonville Jaguars and one season with the New England Patriots, according to www.pro-football-reference.com.

Coy Wire – A 1997 Cedar Cliff High School graduate, Wire played football for Stanford University. He was a defensive back for the Buffalo Bills from 2002 to 2007 and then for the Atlanta Falcons from 2008 to 2010, according to NFL statistics.

Held along streets packed with spectators, the parade combined the carnival attitude of mummers with the community spirit of floats by local merchants and manufacturers.

Tour Through Time: Carlisle residents welcomed back Old Homers in 1924

The Sentinel praised local residents for making Carlisle look more attractive in the lead-up to Old Home Week in October 1924.

Senior fullback Clyde Washington (27) makes a play for the Carlisle Thundering Herd during a 1955 season game.

Carlisle football coach Ken Millen talks to some of the members of the 1955 Thundering Herd team.