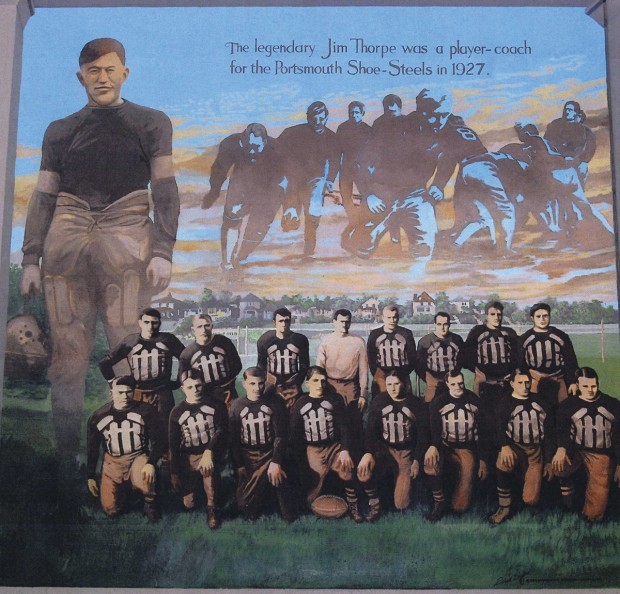 The above mural in Portsmouth, Ohio, commemorates the legendary Jim Thorpe for his work as a player-coach for the Portsmouth Shoe-Steels in 1927. 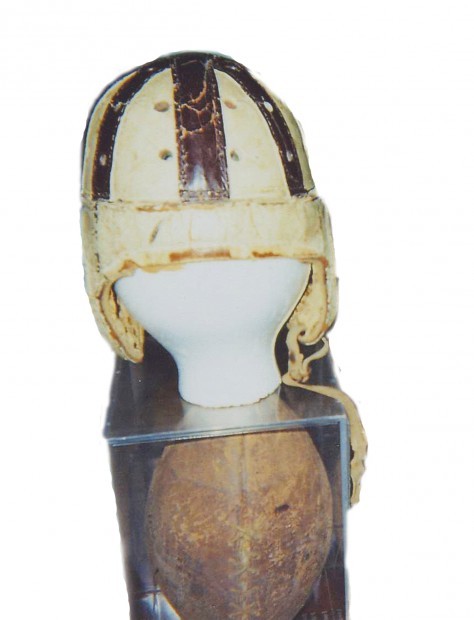 It is believed that sports legend Jim Thorpe used the football helmet and ball pictured above. Both are now part of the sports memorabilia collection kept by John Carpenter of Firebrick, Ky.

When “Radio” Gardner was 15 years old, he snatched a football from the end zone and ran out of the municipal stadium in Portsmouth, Ohio.

Who could blame him? It was not the typical pigskin, but one that had just been kicked over the goalpost by a sports legend.

That same fall, Mary Johnson welcomed a familiar visitor to her family cabin outside nearby Minford, Ohio.

The man once known as the “greatest athlete in the world” was there to say goodbye and offer her a football helmet as a parting gift.

“Jim Thorpe was one to give things away,” said Tom Benjey of Carlisle, who has written several books about the players of the Carlisle Indian School. “I would not be surprised. He was very generous.”

A century ago this July, Thorpe hit his stride winning Olympic gold in the pentathlon and decathlon in the 1912 Stockholm games.

By the time he arrived in Portsmouth, Ohio, in summer 1927, Thorpe had played professional football, basketball and baseball. He was widely regarded as one of the most versatile athletes of modern times.

Homer Shelby, owner of a Ohio shoe company, recruited Thorpe as a coach and player for his semi-pro football team, the Portsmouth Shoe-Steels, according to John Carpenter, a sports historian and memorabilia collector.

Thorpe agreed to play 10 games that season with the Shoe-Steels, promising Shelby that he would defeat the Ironton Tanks, rivals of Portsmouth, which lies across the Ohio River from Firebrick, Ky., where Carpenter lives.

That promise was only partially fulfilled. Portsmouth fell to Ironton 18-0 on Nov. 6, 1927, but won just two weeks later with a score of 7-0, according to www.profootballarchives.com.

As the story goes, future sports commentator “Radio” Gardner ran home with the football after a scuffle broke out between Thorpe and rival players during a close home game in Portsmouth, Carpenter said.

Gardner kept the football for 67 years before giving it over to Carpenter in 1994. A native of Portsmouth, Carpenter has been collecting memorabilia since 1981 and has more than 6,000 items, including a Babe Ruth home run baseball hit off of Guy Cantrell on July 24, 1930. His collection has been featured in “Ripley’s Believe It or Not” and on ESPN.

His collection also includes the helmet given to Mary Johnson.

While in Portsmouth, Thorpe worked as a shoe salesman for Shelby’s company, Carpenter said. There he met and befriended Johnson, later visiting the family cabin often for dinner and hunting expeditions.

“They were not even sports fans,” Carpenter said of the family. And yet, they received from Thorpe a helmet that was passed down from Johnson to a grandson who gave it to Carpenter in 2011.

Bob Wheeler is author of “Jim Thorpe: World’s Greatest Athlete,” which is regarded as the definitive biography of Thorpe by the National Football League. Part of his research involved interviewing childhood friends of Thorpe.

“They told me stories about his parents... how they instilled in him a generous heart,” Wheeler said. “It was ingrained in his nature since Jim was a child. Those of whom he touched were never the same and were greatly inspired.”

The above mural in Portsmouth, Ohio, commemorates the legendary Jim Thorpe for his work as a player-coach for the Portsmouth Shoe-Steels in 1927.

It is believed that sports legend Jim Thorpe used the football helmet and ball pictured above. Both are now part of the sports memorabilia collection kept by John Carpenter of Firebrick, Ky.