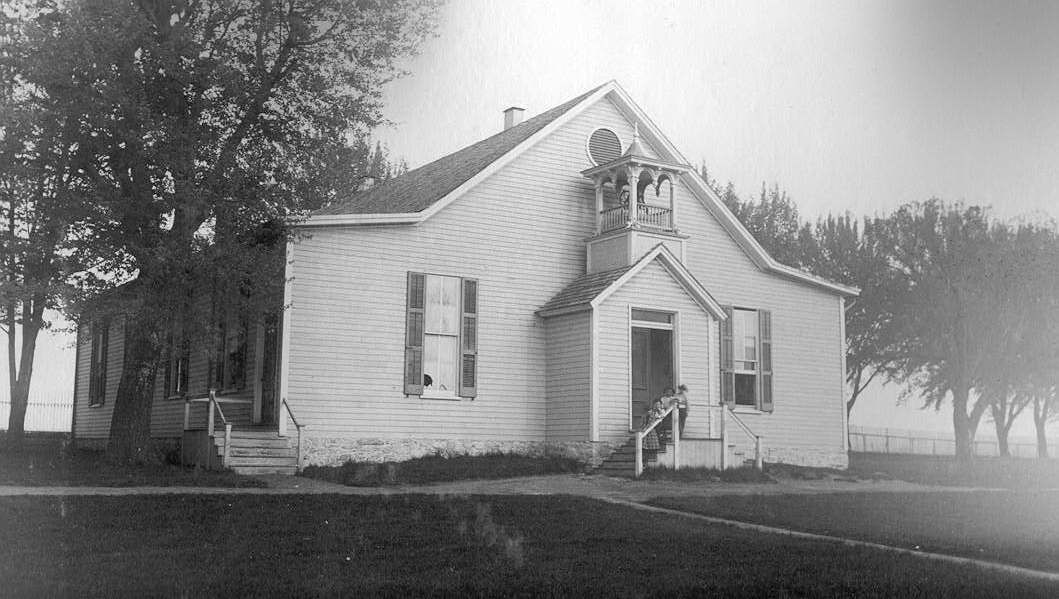 Frederick Douglass spoke at the old chapel at the Carlisle Indian School at Carlisle Barracks during his second visit to the town in April 1893. 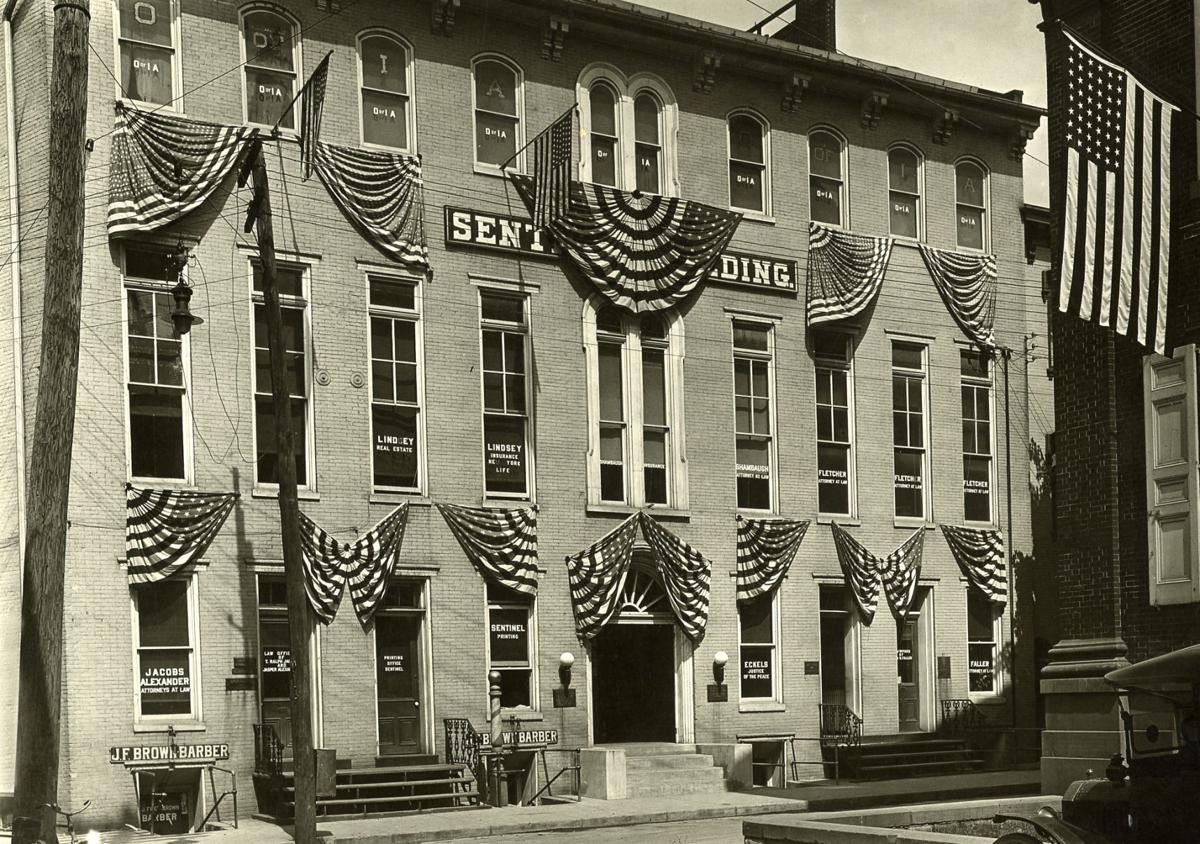 Rheem's Hall in downtown Carlisle was also known as The Sentinel building. This photo from 1924 shows the building draped in flags and patriotic bunting for Old Home Week. 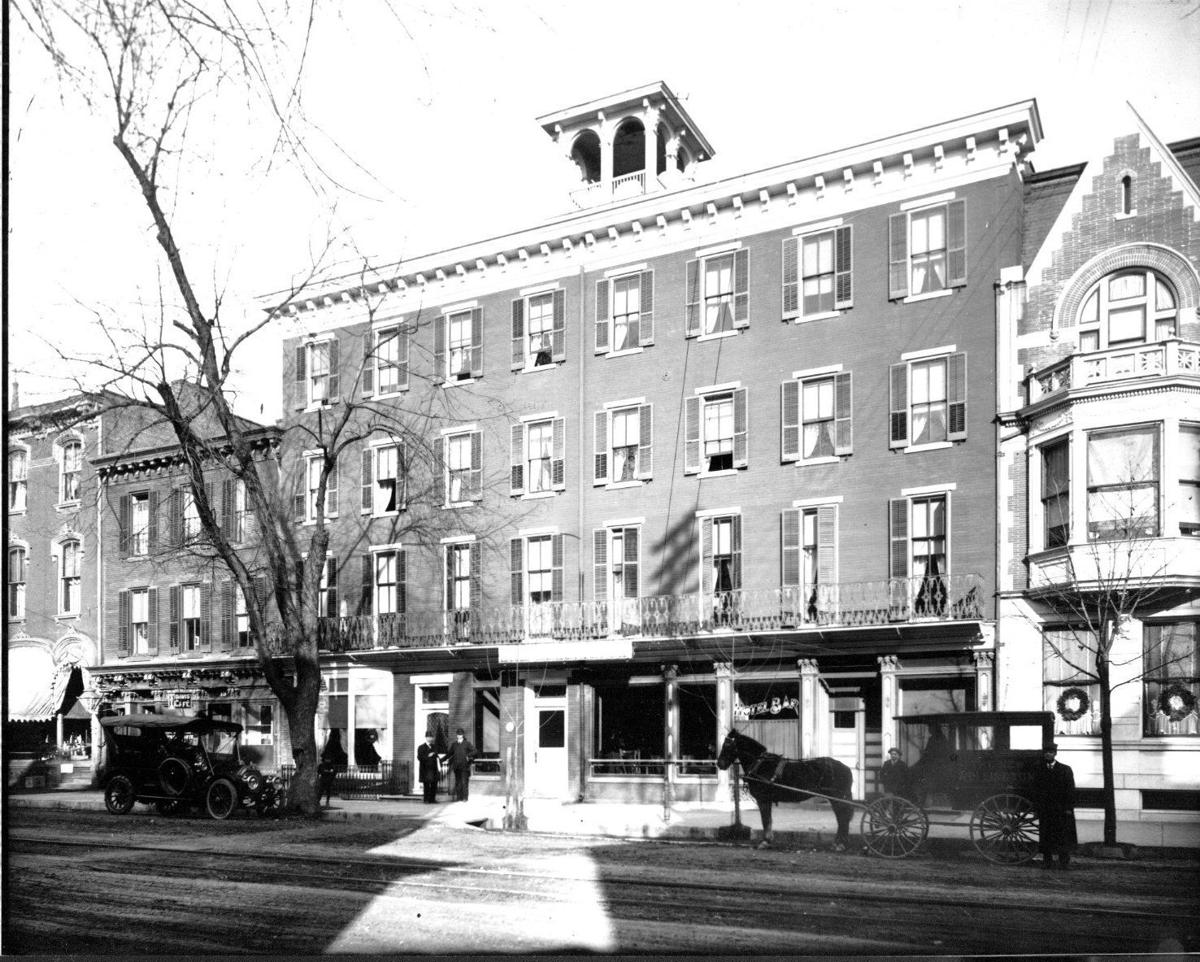 Frederick Douglass stayed at the Bentz House in downtown Carlisle during his first visit to the town in March 1872. The Bentz House was located on part of the land that is today the former Wellington Hotel on East High Street. 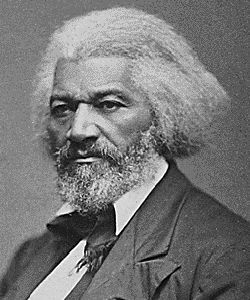 “Exertion” was the word Frederick Douglass used to sum up all that he had accomplished in life.

“I used to pray that the Lord would free me,” the former slave told an audience of Carlisle Indian School students on April 7, 1893.

The Sentinel was there to report on his address to youths caught up in a social experiment to assimilate Native American children to the ways of the white man by teaching them a trade.

In his speech “Self-made Men,” Douglass defined the term as people who rise from lower walks of life without the assistance of family or fortune and in spite of the obstacles society puts in front of them.

“If you want your son to be weak place him beyond the reach of hardships and difficulty,” Douglass said. “Give him all the money he wants and he’ll meet your lowest expectations. It has never been known to fail.”

His thoughts turned to the author of “Uncle Tom’s Cabin,” the 1852 novel that depicted the harsh living conditions of African American slaves. The book stoked the abolitionist movement in the lead-up to the Civil War.

“Harriet Beecher Stowe was a frail woman,” Douglass said. “Yet when the shackles were to be broken from the enslaved race she struck the heaviest blows.”

The day before, on April 6, The Sentinel reprinted an article that ran in the Lancaster Morning News and offered up details on how Douglass remade himself through the process of education. Much of this story came from coverage of a speech Douglass had delivered to black school children in Easton, Maryland.

An orphan at age six, Douglass slept on the dirt floor of a hovel, “In cold weather, he often crept headforemost into a meal bag, leaving his feet in the ashes of a small fire to keep them warm,” the Lancaster story reads. “Sometimes he satisfied hunger by roasting an ear of corn or eggs which he had secured by crawling under barns and stables. His sole garment was a tow linen shirt.”

Douglass grew up in Maryland at a time when there were no schools for black children. He learned to read from an old Webster spelling book and learned to write from papers left out for him on a cellar door by boys and men willing to help.

The Lancaster story reported that Douglass challenged the black children of Easton to rise above their circumstances and pursue an education. “So long as you remain in ignorance, so long will you fail to command the respect of your fellow men.”

Douglass took his message of respectability through labor to the Native American children in Carlisle. “It affords me pleasure to address Indians — men and women of a race that it was believed must soon melt away. But Carlisle has furnished a striking contradiction.”

The Indian school legacy is a complicated one that defies a clear-cut positive or negative. The impact the experiment had on the students and their descendants is as distinctive as the individuals involved.

Commentators of any period reflect the thinking of the times. In 1893, journalists freely mixed facts with opinion in their reporting.

In describing Douglass, the Sentinel reporter said “the great orator and diplomat” was atypical of his race with a physique that indicates “he is more white than black”

“He is a man of large stature but erect and well-preserved though he is 76 years old and his hair is white,” the Sentinel story reads. “He possesses a low and well-modulated voice and has a fine style of oratory, leisurely but forcible.”

The Indian Helper, a student publication, said Douglass “possesses one of those superior intellects which dispel race prejudice and blood poisoning. One cannot see such a master mind but to admire nor to hear such eloquence but to become enchanted.”

In many ways, student publications were used as propaganda to advance the mission of the Carlisle Indian School. “Mr. Douglass was greatly impressed with his visit to the school and felt that he was privileged in being able to come in such close contact with the race for the uplifting of which Carlisle is working.”

Douglass had spoken at the Indian School chapel. But 1893 was not his first visit to Carlisle. On March 2, 1872, Douglass spoke at Rheem’s Hall in support of an initiative by President Ulysses Grant to annex the Caribbean island of Santo Domingo. Local historian David L. Smith wrote an article for the Cumberland County History journal on “Frederick Douglass in Carlisle.”

“Although his speech did not cause a stir, his experiences in the town during his stay led to controversy,” Smith said. He cited as examples two stories published in rival Carlisle newspapers.

The American Volunteer on March 7 reported that Douglass diverged from the subject of Santo Domingo to mention his own experiences as a prominent black man appointed to a presidential commission to visit and evaluate the island.

“He was recognized, in every respect, as an equal,” the Volunteer reported. “He ate at the same table with the commissioners, occupied the same stateroom in the ship’s cabin and in Santo Domingo they occupied the same sleeping apartments. He was treated as a gentleman, just as all were treated.”

“But here in Carlisle, as well as in some other towns, I am not treated in this way,” the Volunteer reported Douglass as saying. “Here caste is still recognized. Here a man is denied certain privileges because of his color.

“I care little about,” Douglass added during his speech. “It is only a matter of time; we must wait patiently and in the course of a few years we will be fully recognized as equals everywhere. There are many colors but only one humanity.”

While in town, Douglass stayed at a hotel called the Bentz House where the owner, George Bentz, refused to let the black man eat in the dining room with white guests. Though dejected, Douglass took his meal in his room. The Volunteer said it was only human nature for some to loath to recognize black equality.

A week later, the Carlisle Herald argued that Bentz mainly snubbed Douglass because he didn’t want to risk a financial loss by offending those who are prejudice toward blacks.

While the Herald did not blame Bentz for avoiding the situation, it labeled the underlying prejudice and segregation as “wicked, tyrannical and cowardly.”

“It has never been denied that a colored man has a right to travel wherever he pleases, just as a white man or an Indian has,” the Herald story reads. “When he travels, he must rely on houses for the accommodation of travelers for food and shelter. The public sentiment that refuses any man who will conform to the rules of a public house to be entertained ... if developed logically, would allow him to starve or freeze in the streets.”

Tour Through Time: Farmers and state agents team up to control a disease

In the lead-up to World War II, Cumberland County was on the front-line of a battle against Bang’s disease.

Frederick Douglass spoke at the old chapel at the Carlisle Indian School at Carlisle Barracks during his second visit to the town in April 1893.

Rheem's Hall in downtown Carlisle was also known as The Sentinel building. This photo from 1924 shows the building draped in flags and patriotic bunting for Old Home Week.

Frederick Douglass stayed at the Bentz House in downtown Carlisle during his first visit to the town in March 1872. The Bentz House was located on part of the land that is today the former Wellington Hotel on East High Street.