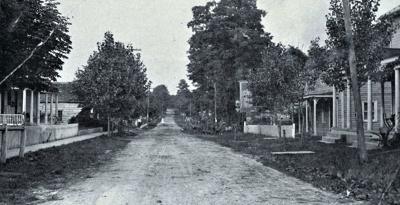 The town of many names almost ceased to exist in the early morning hours of April 23, 1915.

A fire of unknown origin flared up around midnight in the stockroom of Jacob McBeth’s general store.

A neighbor, John Snoke, spotted the danger and quickly raised the alarm. But the residents of Jacksonville — known today as Walnut Bottom, an unincorporated community in Cumberland County — had no fire protection.

They had courage and determination working in their favor along with hardly any wind to fan the flames. Virtually the entire community rallied to save the town from oblivion.

Plans are moving forward to present a full slate of activities at two main venues in the unincorporated community.

“Women and children were added to the line of those working in the fitful glare of the fire, passing bucket after bucket of water in an endless chain,” the Carlisle Evening Herald reported. “So hot was the blaze that some of the men near the fire had their clothing literally burned from their bodies.”

The situation was dire. … The prospects bleak. Pieces of charred wood and smoldering timber were carried for a considerable distance. Farmers kept vigil over their barns and homesteads hoping the damage would be contained.

“Wells and cisterns in some sections were dipped practically dry before an impression was made on the fire,” the Herald reported. “Rain assisted after some hours work in saving the reminder of the town.”

It was 3 a.m. before the fire was finally brought under control. Even then, buildings were still burning at 9 a.m., according to The Sentinel in Carlisle. Lost that day was the general store, the Order of Independent Americans Hall, the house and barber shop of Martin Fehl and a house and stable owned by Harry Latshaw.

Despite the odds, Walnut Bottom survives to this day. On Sept. 21, residents will rally again, this time to celebrate the bicentennial of the town they call home. The group organizing the event published a history of the community going back before its official start in 1819 in South Newton Township.

A land survey from June 1787 included the tract that makes up most of the present-day town on both sides of what is now Route 174 about seven miles from Shippensburg. One author called the settlement “a city with more aliases than an expert criminal.”

“As it grew, its name did indeed change frequently over time,” the history reads. “At first it was called Frystown after a nearby landowner named Peter Fry. Canada was another name of the town.” It is believed this came from Cyrus Canada, an early settler, but there were multiple spellings including Canady and Kennedy.

The town also went by Powderville for some unknown reason and then as Jacksonville. One theory was the name change was in homage to President Andrew Jackson while an unconfirmed source suggested it had more to do with a family of early settlers who lived on the east end of town.

“It was named Walnut Bottom in 1850 when the U.S. Post Office decided that only one Jacksonville would be allowed in Pennsylvania,” the history reads. The other is in Indiana County. To further complicate matters, the town also went by the name of Greythorne after the Harrisburg and Potomac Railroad built a station nearby.

Sentinel Name Game: A village of many aliases

The village of Walnut Bottom went by many aliases in its almost 200-year history.

“Who the very first settlers were and why they decided to stop at this location … is subject to speculation,” the history reads. William F. Hovetter, one of its oldest residents, suggested that a group of settlers traveling west to Ohio had stopped in the area after several members of the party fell ill.

The evolution of what became Walnut Bottom followed the normal pattern for small towns nationwide. All too often, towns begin with taverns at crossroads or along keys points in a trade route. With growth came an increase in the demand for local services, which draws in the first small shops and cottage industry.

As time moved on, wagons gave way to the railroad and the train to the automobile. Local businesses prospered, faltered and moved out. Some people stayed on. Many others moved away. Very little was written on the history of Walnut Bottom from 1840 to 1890. Most of that material came from the memories of old-timers compiled for a history booklet published in 1969 for the 150th anniversary.

“During this period, Walnut Bottom did not stand still,” that booklet reads. “There was much construction of homes and businesses. The townspeople were very industrious. … There were volunteers from this area who served in the Northern Army. The people living in the area were subject to all the trials and tribulations of a country at war.”

In June 1863, the Confederate Army of Northern Virginia marched through the Cumberland Valley on its way to Harrisburg, the state capital and a strategic transportation hub. Decades later, in December 1938, a local newspaper interviewed William Baughman of Walnut Bottom about the invasion.

“There were quite a few of them and there were a good many of them on horseback, it seemed to me,” Baughman recalled. He said the Rebels were actually very friendly to the civilians in town.

The 1969 booklet described how local residents spent their down time through much of the 19th century into the early 20th century. “There were many picnics, buggy races and other forms of entertainment,” the history reads. “There was a band, an orchestra, quilting bees and taffy pulls.”

In 1907, the town dedicated the Order of Independent American’s Hall, the largest structure lost in the April 1915 fire. The Herald described this building as the center for educational and amusement activities. The two-story hall was about 50 feet long and 35 feet wide.

Almost 16 years later, Walnut Bottom was under consideration as a location for an airport for transcontinental flights. The Shippensburg News-Chronicle, in its Jan. 30, 1931 edition, reported that several local landowners had been approached by real estate agents and representatives of the State Aeronautics Commission.

Most of the interest was in land south of town and adjoining the Reading Railroad. The News-Chronicle said the airport would bring Shippensburg within an hour’s travel from New York and would allow passengers to travel the “dangerous mountains of Pennsylvania by way of rail.” For whatever reason, the deal fell through and the airport never landed near Walnut Bottom.

From the start, the town’s survival was tied to the surrounding agriculture. The recent history book said that in 1953, there were 23 million people living on farms throughout the U.S. Today, there are just 3 million or 1 percent of the population.

Small towns saw the closing of many small businesses and the closing and consolidation of schools and local churches.

“As our parents grew older, some passed on and their houses were bought by folks who didn’t grow up in Walnut Bottom,” the history reads. “Slowly, the town became a place where neighbors did not know everyone who lived in the surrounding homes. … The occupants of Walnut Bottom have changed but the town is still here. We may no longer know each and every resident, but there remains a sense of place.”

The community is located along Pennsylvania Route 174 about 7 miles east-northeast of Shippensburg. Walnut Bottom has a post office with ZIP code 17266, which opened on Jan. 14, 1850.

These communities can be small, cross-roads type areas with a few homes and businesses or they can be large business complexes with relatively few residents but a strong commercial center. They can also be simply recognized for prior historical relevance that carries on as they are referenced by new generations.

Regaining community cohesiveness can be a challenge, but Porter hopes the celebration of the past can spark a brighter future. 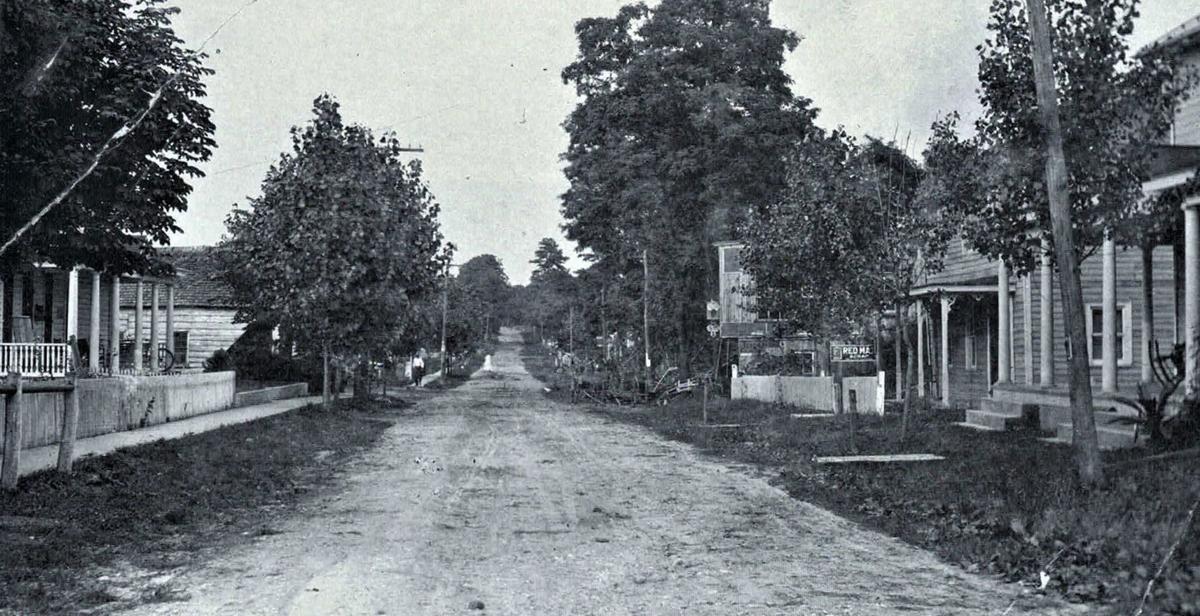 The view looking down West Main Street in Walnut Bottom. 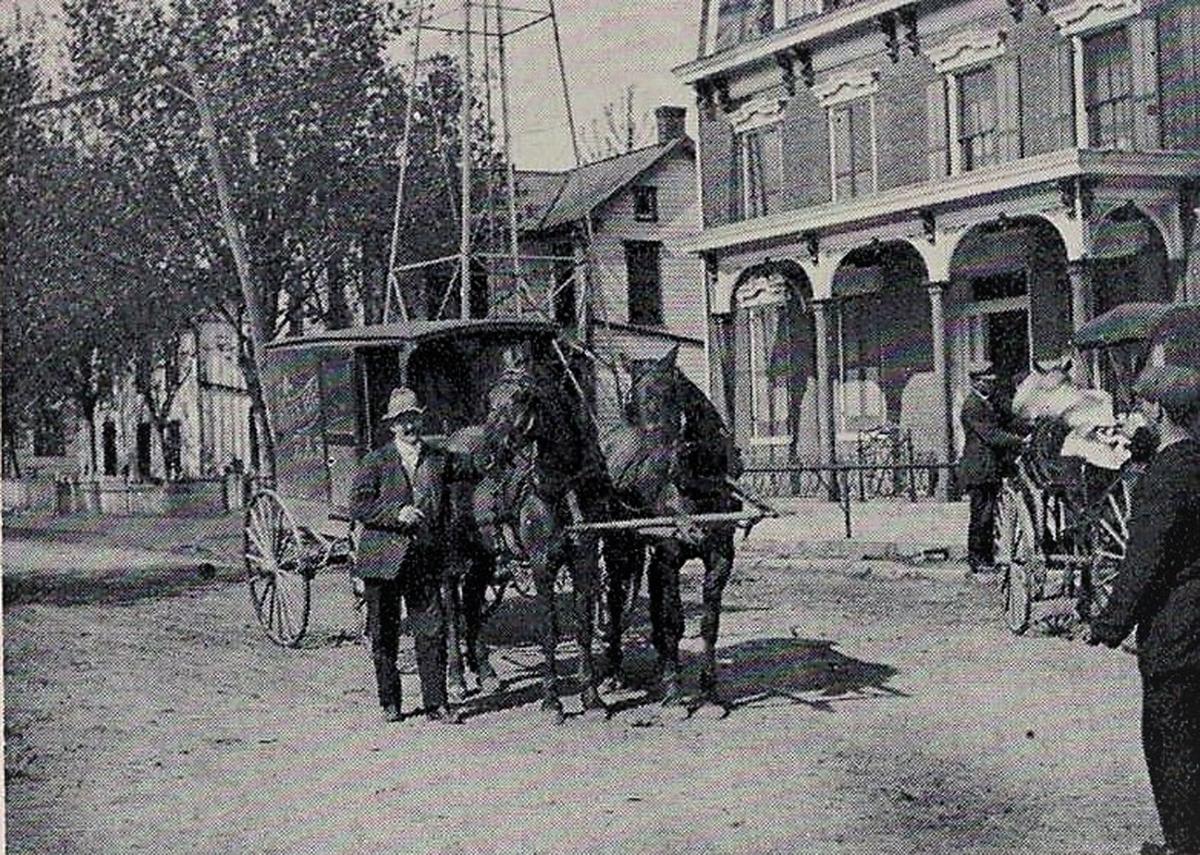 This photo from circa 1900 shows the Crusey building in the background. Located on the corner of East Main Street and Maple Avenue in Walnut Bottom, the building once served as a general store and a post office. It is now an apartment building. 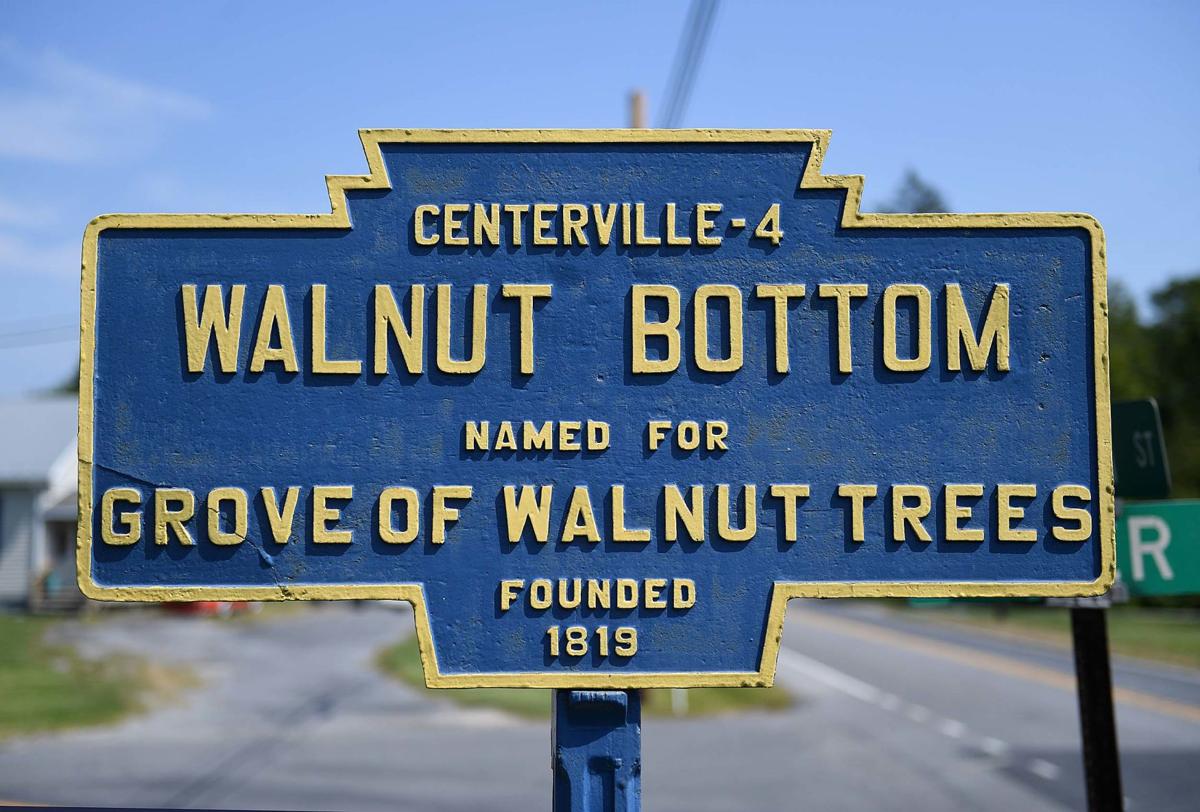 Walnut Bottom will celebrate its 200th anniversary this month.