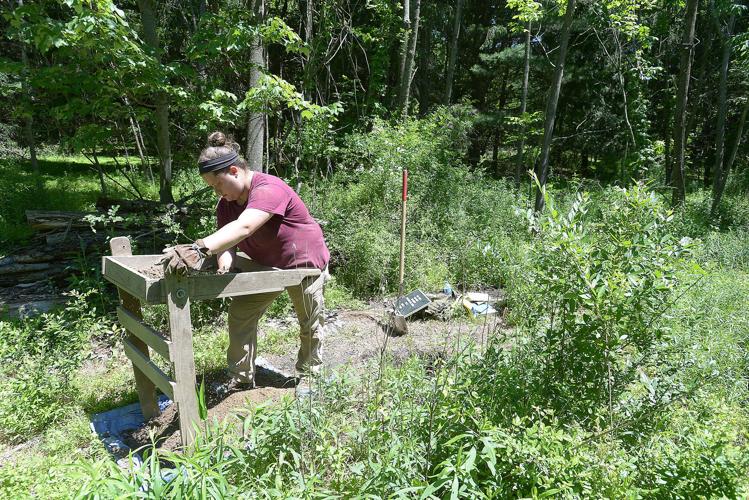 Emily Masters screens for artifacts while performing a shovel test pit at the POW camp in Michaux State Forest around the area of the mess hall. 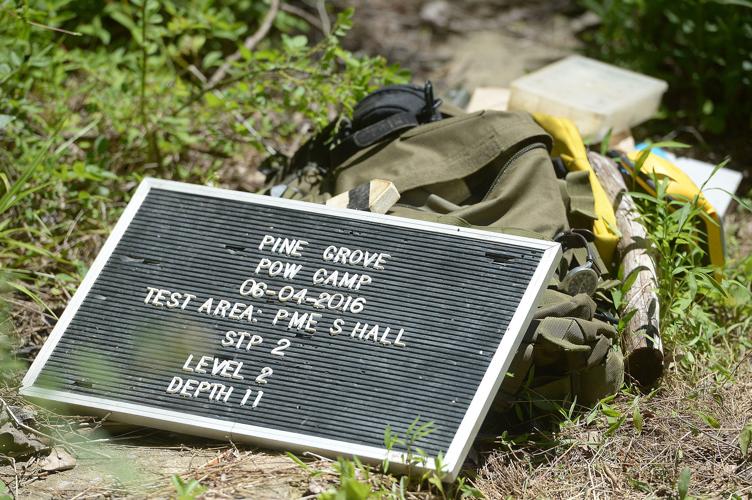 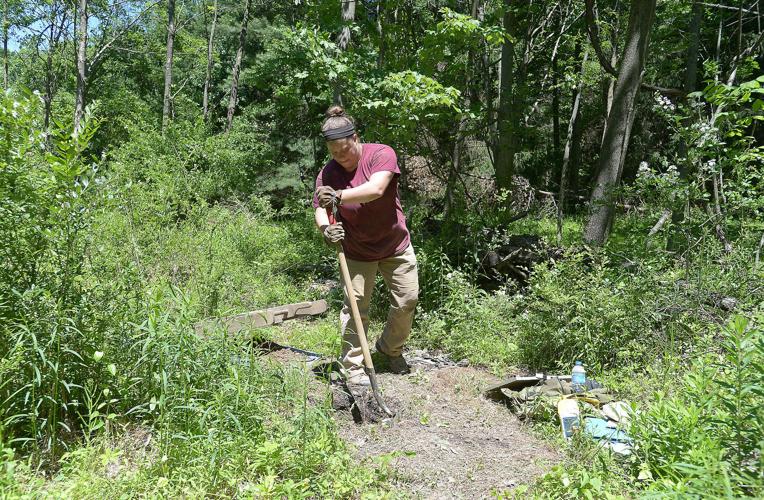 Each man was a stranger – a prisoner in hostile territory.

Defeated in battle, they were captured and transported to a secret holding area in the woods of South Mountain along the edge of Cumberland County.

There they were prodded and pushed, tricked and coerced, into revealing sensitive information about Axis forces moving against the Allies.

“It’s a part of World War II not talked about or well publicized,” said Emily Masters, a graduate student conducting research at what remains of the Pine Grove Furnace POW interrogation camp.

“One of the best things that archaeology can do is to give voice to people we do not think about when we think about the past,” added the Waynesboro native who is seeking a master’s degree in applied archaeology from Indiana University of Pennsylvania.

All too often, such people leave behind only artifacts to tell their story instead of a written record. It is up to professionals like Masters to uncover what is buried beneath the soil.

While a single find can be exciting and interesting, it is far more rewarding to have an assembly of objects to piece together the history of a hidden cultural treasure, Masters said.

“This project will open new windows into the lives of the men held at Camp Michaux and those who guarded them,” said Christina Novak, press secretary of the Pennsylvania Department of Conservation and Natural Resources. “It will open a new chapter in the local history of the Second World War.”

The state agency is responsible for the management of the Michaux State Forest where the ruins of the camp are located. DCNR together with the Pennsylvania Historical and Museum Commission issued the permits clearing the way for Masters to conduct an archaeological survey to gain insight into the lives of the POWs.

“The rarity of interrogation sites and the lack of documentation and historical understanding of their daily operation make the investigation of the Pine Grove POW camp significant,” Novak said. She added almost a half a million POWs were detained in the United States during World War II.

Nearly all of them were held in internment camps except for a few high-value captives suspected of having information crucial to the Allied war effort, Novak said. Those POWs were held for short periods in specialized interrogation camps, including the one that operated in the Michaux State Forest.

“Though previous research investigations have taken place at the site, a comprehensive archaeological survey has never been conducted,” Novak said. “This should identify areas of the site that have the least disturbance and most information and will likely guide research at Camp Michaux for years to come.”

Masters started her survey work by learning what is already known about the POW camp. This included reading the 2006 book “Secret War at Home” by John Paul Bland. She also met with local historian David Smith who for many years has led walking tours of Camp Michaux.

To further prepare herself, Masters studied the research of Maria Bruno, an assistant professor of archaeology at Dickinson College, who mapped out the ruins of this site, which served as a Civilian Conservation Corps camp before World War II and as a church camp many years later.

Masters used historical maps and documents to pinpoint the remnants of buildings that were used exclusively during the POW camp era. That way any recovered artifacts are more prone to reflect what life was truly like for prisoners held at Camp Michaux.

“It’s hard to say if I’m going to find anything that would speak to that,” Masters said. “I will look at the way they were living and the kinds of food they were eating. Because it was a military operation, it’s hard to tell what would be left behind.”

She is optimistic there is insight to be gained depending on what was discarded and where it is found buried in the soil. One goal of her survey is to dig about 75 shovel test pits throughout the chosen remnants that include the building footprints of barracks for enlisted men and officers along with mess halls that catered to camp inmates and their guards.

“It’s easier and makes more sense to dig shovel test pits,” Masters said. By digging at intervals, a larger area could be covered allowing her to focus attention on those pits that yield the greatest density of meaningful artifacts.

As she works, Masters will record the location of each test pit onto mapping software for future reference. The most promising areas could then be roped off in a grid pattern for more detailed excavation work.

An important facet of this survey is the involvement of a military veteran, Novak said. According to her, Dominick Amaral, a program curator with the U.S. Army Corps of Engineers, has been selected to be the first veteran to participate in an archaeological field project in Pennsylvania.

Amaral, who currently works at the U.S. Army Heritage and Education Center, was unavailable for comment. He is assisting Masters with images and sources archived at the center located just outside Carlisle.

“While unprecedented in the U.S., UK archaeologists and the British government have, for years now, involved returning combat vets from Afghanistan and Iraq in archaeological projects,” Novak said in a news release about Masters and her project.

She noted how these collaborations in Britain have connected veterans with their heritage and with the struggles and challenges faced by their predecessors. The work has also allowed veterans to network with field school students and community volunteers while opening new career pathways and opportunities for professional development in such areas as heritage preservation and the preservation trades.

“It will bring a representative of our modern veteran community face-to-face with the day-to-day lives of soldiers who came before him,” Novak said of the project planned for Camp Michaux.

As for Masters, the opportunity to survey the camp is part of a progression of training that started with her earning a bachelor’s degree in anthropology at West Chester University and continued with an internship with Pennsylvania Department of Transportation in the summer of 2015.

Masters is working towards a career in cultural resources management.

David Maraniss will be appear a book discussion and signing event from 4 to 6 p.m. Tuesday at the Bosler Memorial Library, 159 W. High St., in Carlisle.

Emily Masters screens for artifacts while performing a shovel test pit at the POW camp in Michaux State Forest around the area of the mess hall.