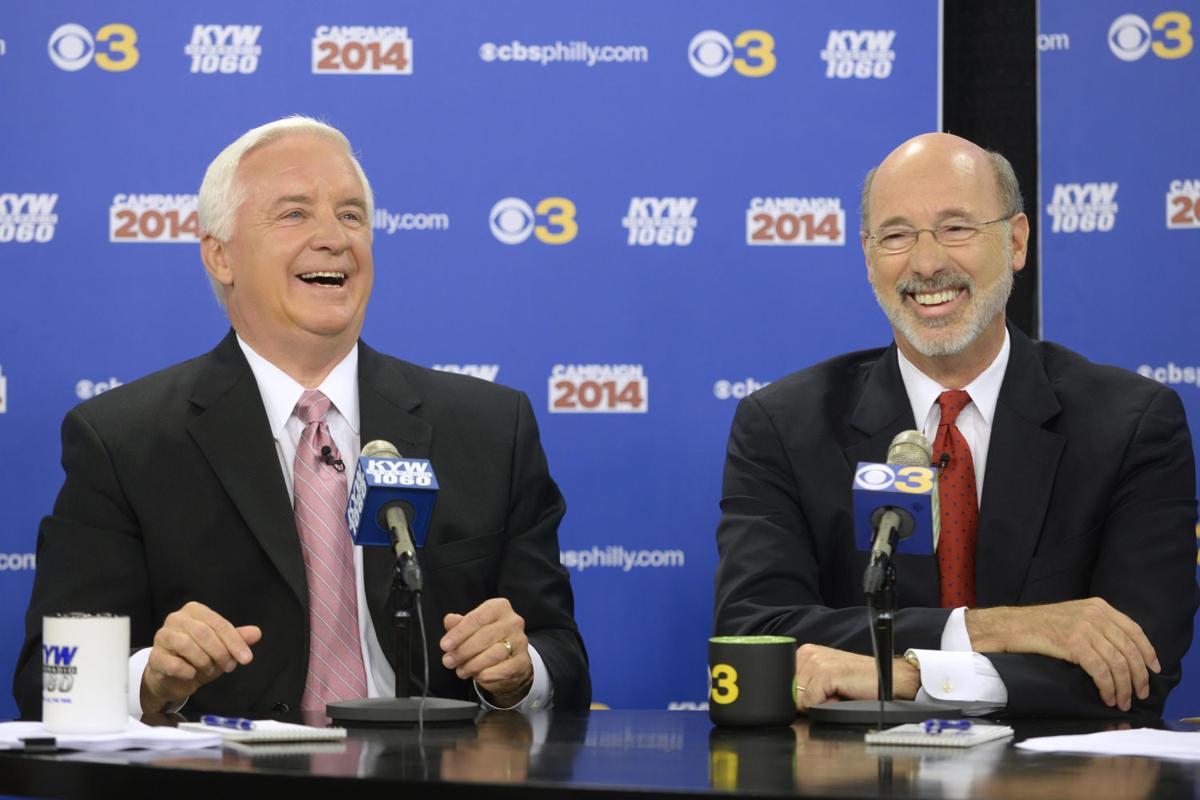 Republican Gov. Tom Corbett, left, and Democratic challenger Tom Wolf share a laugh during their debate at "Breakfast with the Candidates" event at KYW-TV and KYW-AM on Wednesday, Oct. 1, 2014 in Philadelphia. The second debate between the two became tense as Wolf sought to assign blame to Corbett for budget deficits and struggling schools while Corbett tried to frame Wolf as the candidate who will favor labor unions over taxpayers. (AP Photo/The Philadelphia Inquirer, Tom Gralish, Pool) 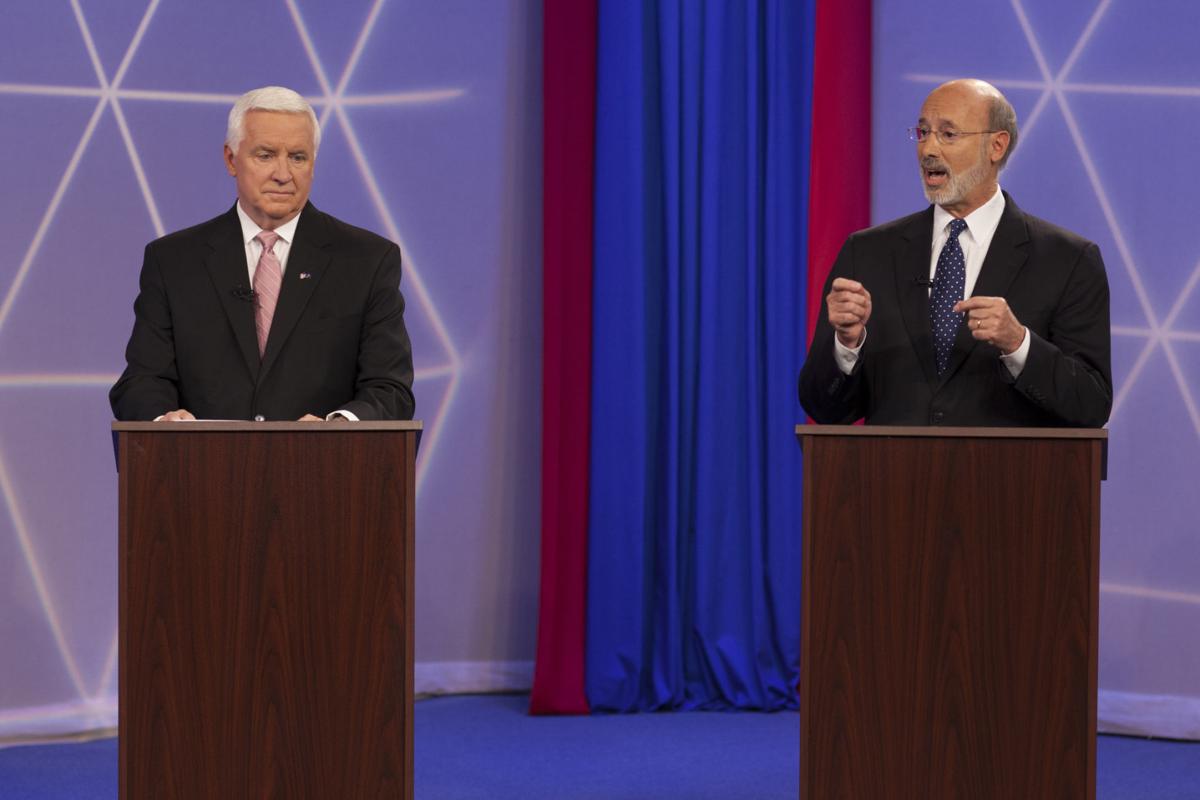 By Naomi Creason, The Sentinel

No Pennsylvania governor has been unseated in a re-election bid since the 1968 change to the state Constitution allowing the governor to seek re-election.

According to polls and analysts, that might change Tuesday.

Independent polls have Democratic challenger Tom Wolf leading Gov. Tom Corbett by anywhere from 9 to 13 points — a decrease in the gap from only a few months ago. However, it’s substantial enough of a difference that G. Terry Madonna, director of the Center for Politics and Public Affairs at Franklin & Marshall College, said Corbett may need “a song, a prayer and a miracle” to edge out Wolf in Tuesday’s general election.

Madonna has been polling state voters for 24 years. He said that given the nature of politics today, anything could happen. News could damage a candidate right before the election.

There is, however, one major unknown factor in the race.

Madonna, as well as Dickinson College assistant professor Sarah Niebler and Widener University associate professor Wes Leckrone, said turnout will be key in the election, but the question remains of just how many voters — especially Democratic voters — will take to the polls for a midterm election.

“Turnout in midterm elections is always lower than the presidential elections,” said Niebler, who is a Gettysburg native and worked at the independent Polling Institute at Muhlenberg College in Allentown. “It’s also an off-cycle year where there are no Senate races.”

“Democrats have been found not to show up for midterm elections,” he said. “The polling seems to show that Tom Wolf will win, so voters may not feel the need to show up.”

It’s that turnout that has interested parties from across the country converging on Pennsylvania.

Those national names are coming to the state to ensure voters who support their party’s candidate get to the polls Tuesday to vote, Madonna said. He noted that’s particularly true in Philadelphia where the Obamas and Hillary Clinton are rallying residents to vote.

“The two groups of voters that don’t turn out to vote ... are 18- to 29-year-olds and minorities,” he said. “Half of the people of Philadelphia are minorities, and 85 to 90 percent of African-Americans are Democrats.”

Madonna said the race is close enough to warrant extra attention from national parties to instill the motivation to vote. It also gives those eyeing a presidential bid in 2016 a chance to work their way across Pennsylvania early, he said.

Niebler said the interest from Democrats also is a way for the party to celebrate a victory at a time where they are losing more battles than they are winning.

“It’s one of the bright spots for Democrats,” she said. “The sixth year of a presidential term is always bad news for an incumbent party. It’s no different than in 2006 with (George W.) Bush. The Republican party lost a lot of seats. Democrats are poised to lose a fair number of seats (now).”

Leckrone said governor’s races are not wholly influenced by what happens in the presidential office, especially when there is an incumbent governor involved. Leckrone, who is writing a book on Pennsylvania’s governors, said the governor is usually seen by voters as entirely separate from the president, and the governor is often judged on what he has done in office.

“When it’s an open seat election, then it’s much more likely the popularity of the president (will affect the race),” he said.

What has affected the race, especially early on, was how Pennsylvania voters viewed Corbett his first year in office.

“I think Corbett was never able to recover from his first year in office as governor,” Leckrone said. “He came in with a very difficult economic situation, and he never recovered from that.”

Leckrone said Corbett’s administration has had its fair share of battles over the years, including Corbett’s involvement as attorney general during the Jerry Sandusky/Penn State scandal, some infighting among the Republican base and most recently with the investigation over pornographic emails among staff at the attorney general’s office and the state Surpreme Court.

Corbett has even been a target for “The Colbert Report,” which most recently attacked Corbett on Tuesday over the Photoshopped images on his campaign website, Pennsylvania’s failure to pass a law banning pigeon shooting and the gap between Wolf and Corbett that can be “seen from space.”

While there’s debate on whether the latest issues have hurt the Corbett campaign, which has steadily gained approval over the last few months, it hasn’t been opportune for Corbett to handle such issues right before the election.

“Every day that’s in a headline is a day he doesn’t get his message out,” Leckrone said.

And the message for which most voters are looking have to do with education and the economy.

Madonna said that historically, the major issue in most governor’s races in the state is the economy. This year, however, education edged it out as the top issue for voters.

In the latest Franklin & Marshall Poll that came out Wednesday, 25 percent of voters believe education is the most important issues facing the governor’s race. About 16 percent said taxes were the main issue for them.

That switch in the driving factor for voters has helped Wolf, Madonna said.

“It’s an issue that has helped Tom Wolf,” he said. “Rightly or wrongly, Corbett is taking the blame for the cuts in funding and staffing.”

Leckrone said what has also helped Wolf is that he is not a politician — a trait that pulled him away from the other candidates in the Democratic primary.

Niebler said there were many Democrats vying to be “The Democrat,” and it is telling that who won was a candidate who was not from either Philadelphia or Pittsburgh. Citing the James Carville joke that Pennsylvania is Pittsburgh and Philadelphia with Alabama in the middle, Niebler said Wolf comes from a region primarily dominated by Republicans. Although she said she doesn’t believe in Carville’s assessment — saying there are plenty of other states, such as Wisconsin, where there is a rural component and two major cities — she noted that Wolf’s hometown of York may play a part in how voters view him.

“A lot of Democrats were clambering to get the job,” she said.

As Wolf fought to gain popularity in the May primary, Corbett is fighting now to gain some traction in the campaign. According to the Franklin & Marshall poll, the percentage of people who believe Corbett is doing an “excellent” or “good” job is up to 30 percent in October, compared to 28 percent in September. About 34 percent of those polled said Corbett performed well enough to deserve re-election.

Despite the late push, the Franklin & Marshall poll still has Wolf with a 13 percentage point lead over Corbett among self-reported likely voters and an 18-point lead among registered voters.

Despite the question regarding turnout, Leckrone said all signs point to a new governor.

Gov. Tom Corbett's record in office at a glance

A look at Republican Gov. Tom Corbett's record over his nearly four-year tenure:

This year’s general election will provide the opportunity for some residents to vote in a new district.

Those wanting to vote Tuesday already must be registered to vote in the county.

Here’s a look at the contested local races Cumberland County residents will see on the ballot Tuesday.

Republican Gov. Tom Corbett, left, and Democratic challenger Tom Wolf share a laugh during their debate at "Breakfast with the Candidates" event at KYW-TV and KYW-AM on Wednesday, Oct. 1, 2014 in Philadelphia. The second debate between the two became tense as Wolf sought to assign blame to Corbett for budget deficits and struggling schools while Corbett tried to frame Wolf as the candidate who will favor labor unions over taxpayers. (AP Photo/The Philadelphia Inquirer, Tom Gralish, Pool)