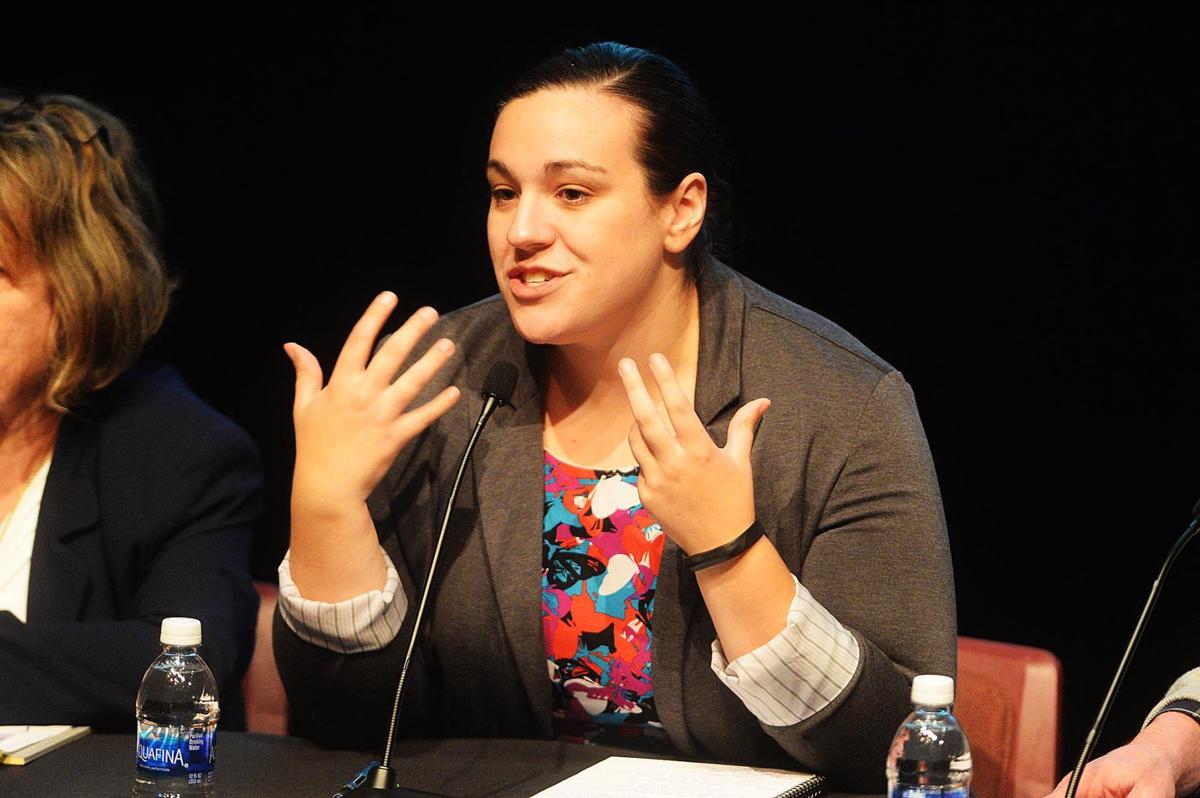 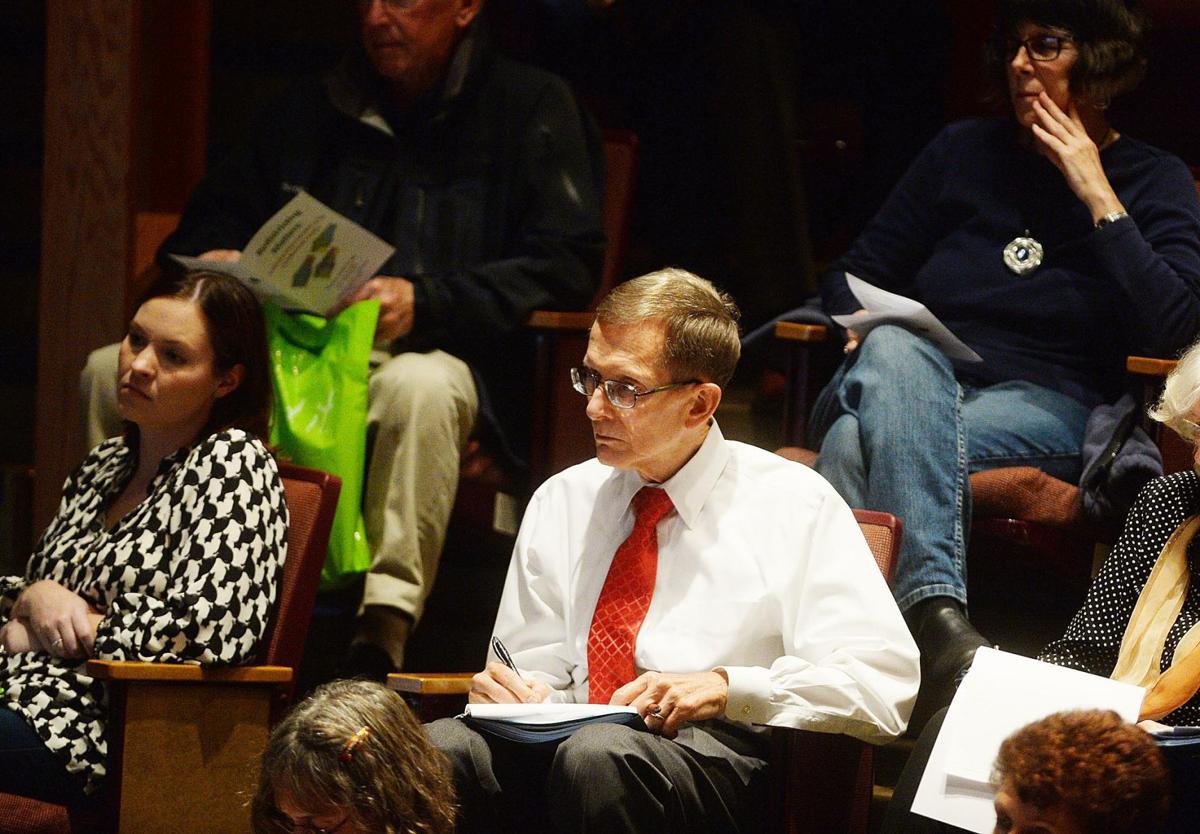 Audience members listen as Vince DiFilippo, chairman of the Cumberland County Board of Commissioners, speaks during a redistricting meeting at Anita Tuvin Schlechter Auditorium in Carlisle. 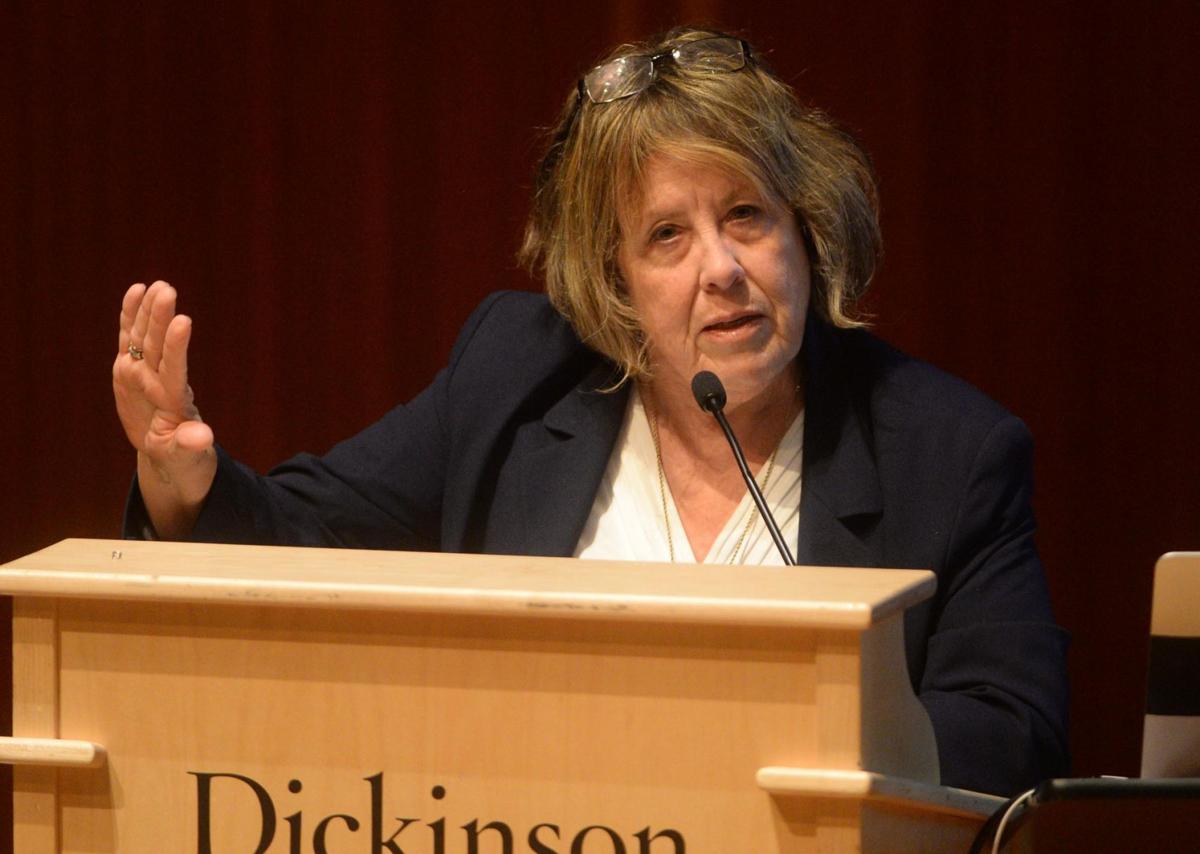 Nancy Konhaus Griffie, chair of the Silver Spring Township Board of Supervisors, says it 'makes no logical sense' to split the township into two state House districts. 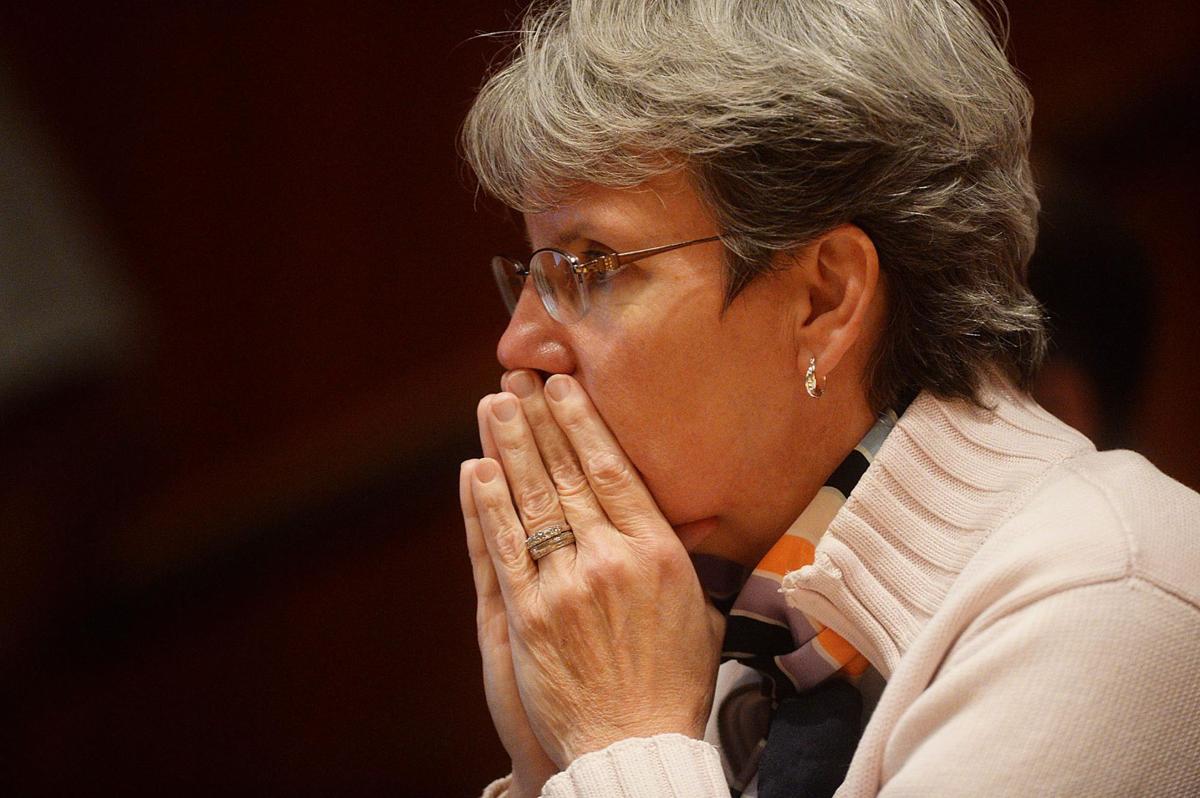 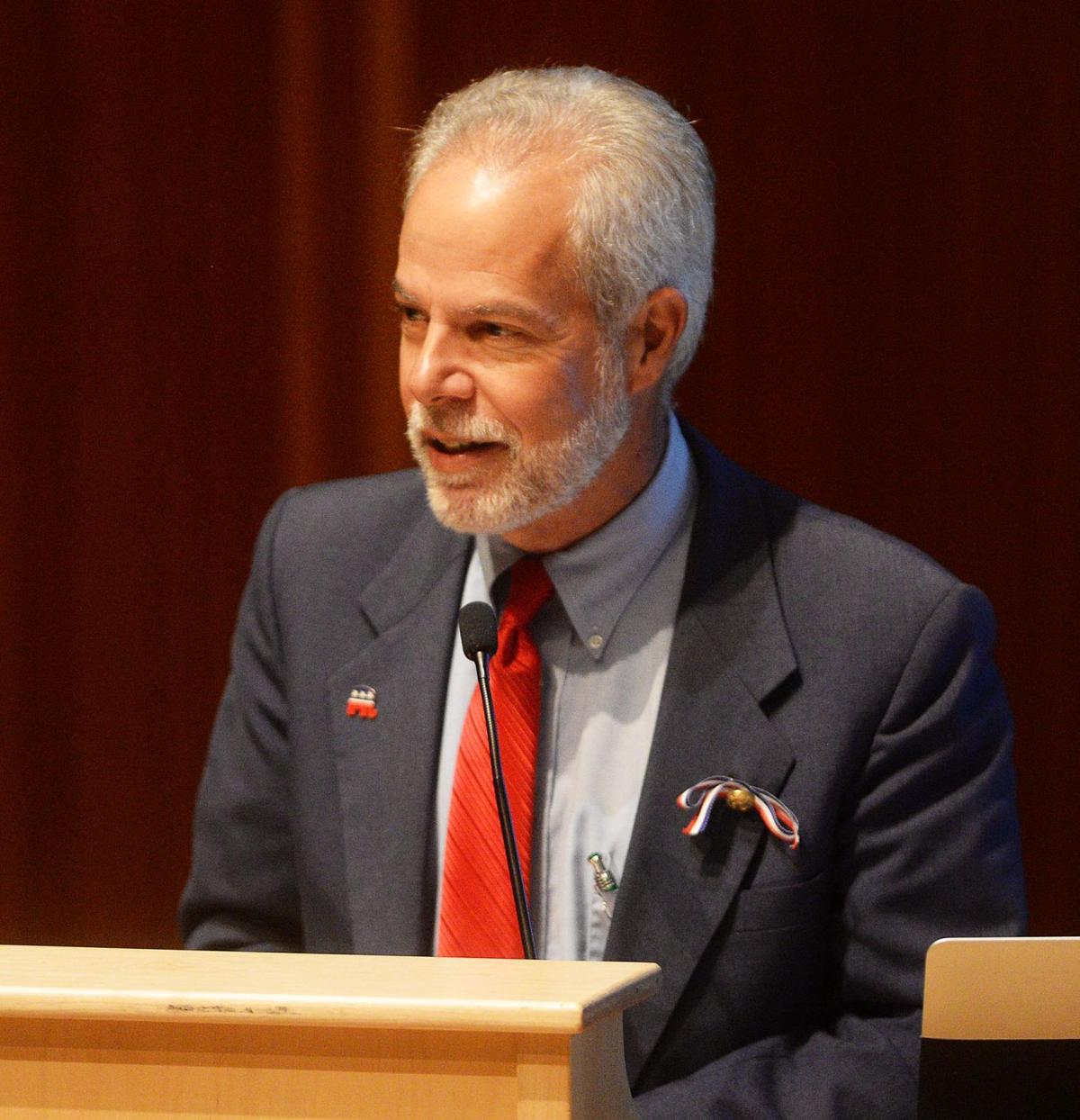 Vince DiFilippo, chairman of the Cumberland County Board of Commissioners, speaks. 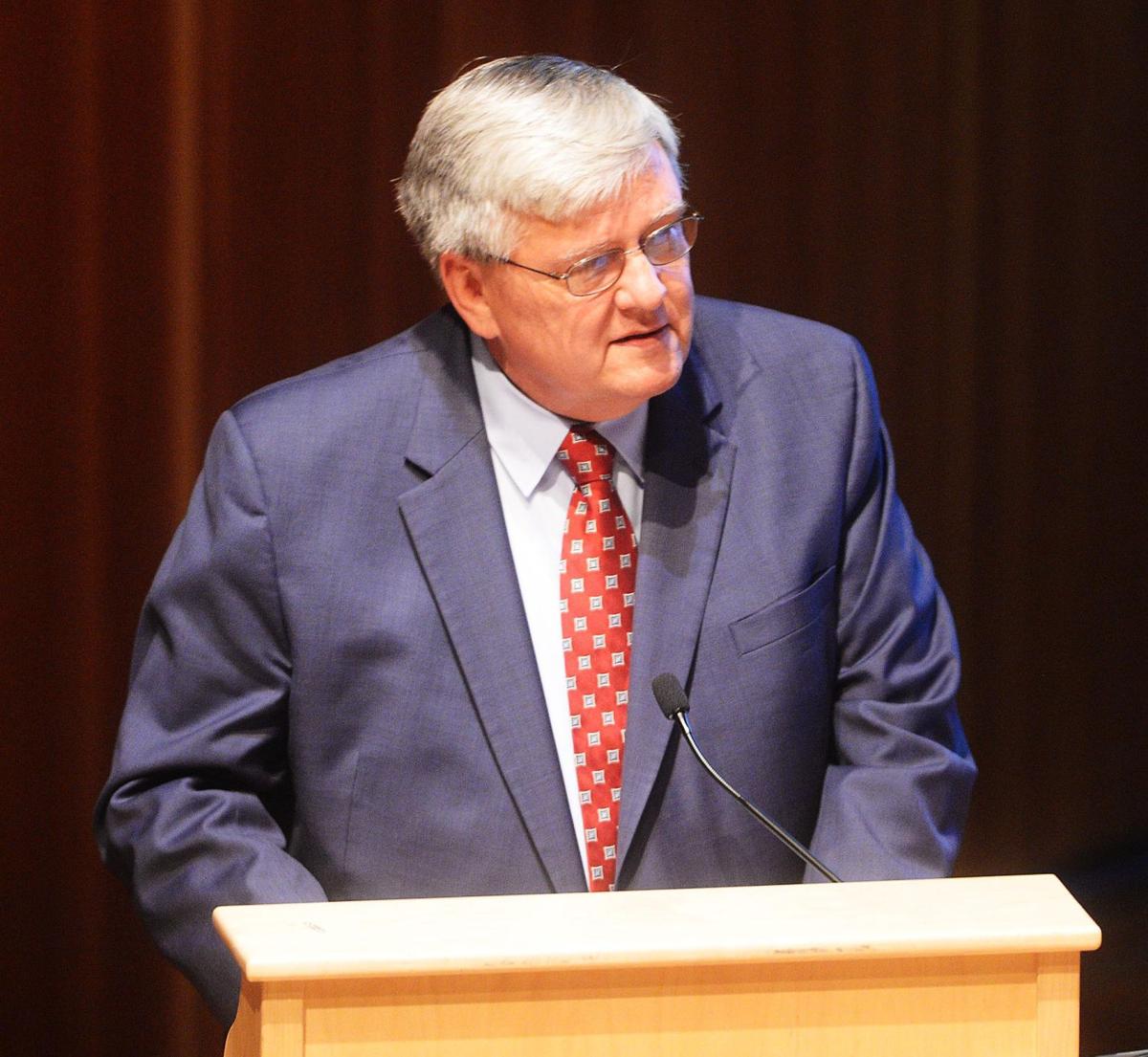 A redistricting meeting at Anita Tuvin Schlechter Auditorium in Carlisle. 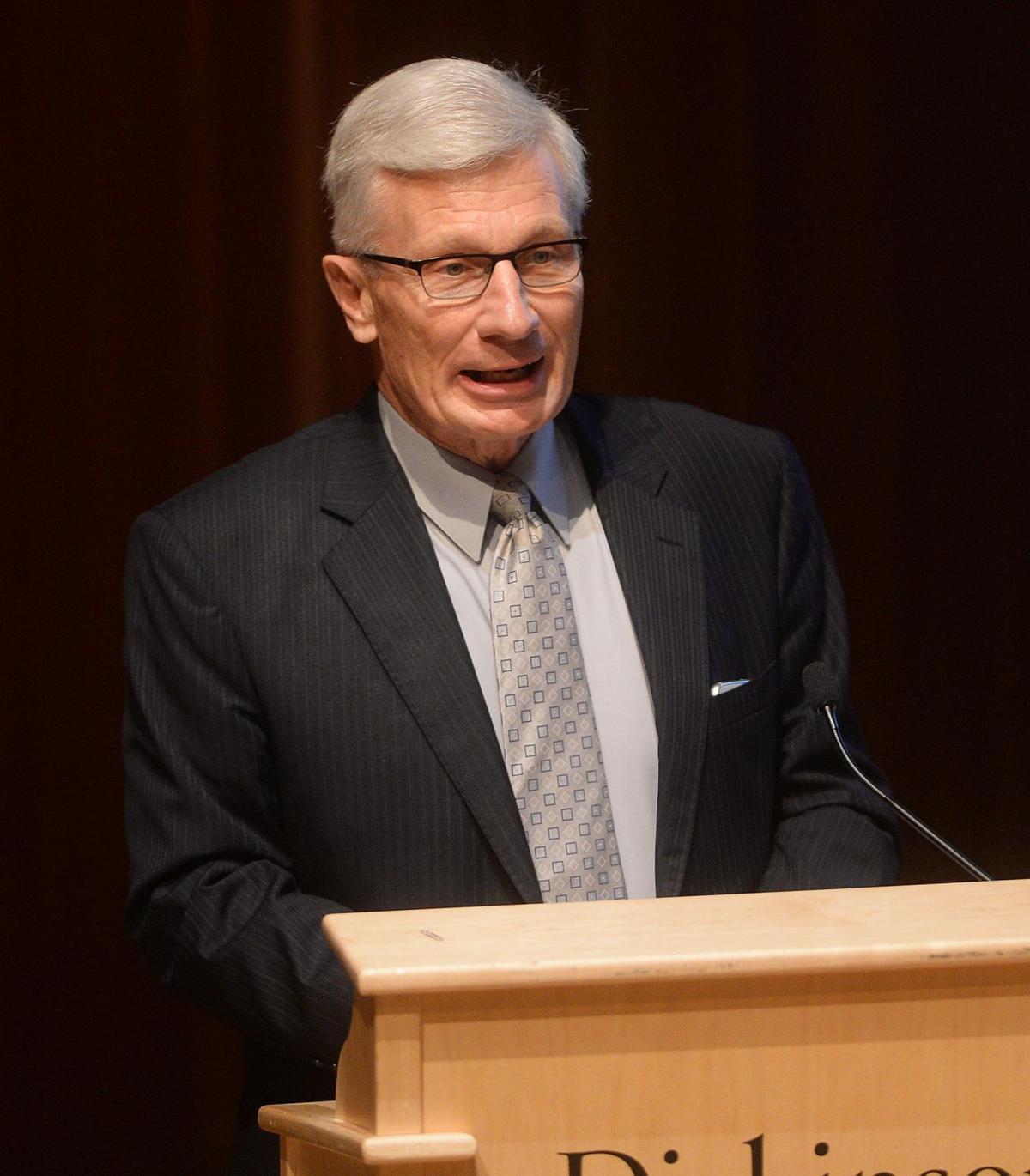 Bill Schneider of the Cumberland Valley chapter of Fair Districts PA says much of the frustration people have with government and politics can be tied to gerrymandering.

First was the question of how gerrymandering can be defined, especially in a legal sense pursuant to court challenges. Second was how advocates can convince politicians, especially those who are currently benefitting from gerrymandering, to think of the long-term consequences instead of short-term control.

“I would say that a good chunk of the frustration you feel in the political process today can be attributed to gerrymandering,” said Bill Schneider of the Cumberland Valley chapter of Fair Districts PA.

Thus far, the U.S. Supreme Court has acknowledged that “extreme partisan gerrymandering” can, theoretically, exist, but there is no legal precedent to define it. Other forms of gerrymandering, such as redistricting with racial bias in mind, have significantly more case law behind them.

“While the Supreme Court has said that extreme partisan gerrymandering can be unconstitutional, it has not decided what that would actually look like,” said Dickinson political science professor Sarah Niebler, who moderated the event.

A case out of Wisconsin, Gill vs. Whitford, could force the court to do just that. The plaintiffs argue in the case that gerrymandering can be quantified through an “efficiency gap” measurement of the extent to which a party divides its voters to gain control of more districts, even if this means the districts must be drawn in geographically illogical ways.

A federal decision on Whitford is not likely for nearly a year. But in the meantime, advocates have pursued state and local solutions, including in Pennsylvania and Cumberland County.

“There’s no doubt in my mind that the only way we can right this wrong is by advancing this legislation,” Commissioner Jim Hertzler said. “Cumberland County has been treated as an afterthought in this process.”

As Commissioner Vince DiFilippo noted, Cumberland County has nine state representatives. Three state Senate districts run through the county, along with six state House districts. But none of the senators live in Cumberland County. Their districts are centered elsewhere. This is the case with three of the six House seats, as well.

This is nothing against the legislators themselves whom DiFilippo said have done an “excellent job” responding to Cumberland’s needs.

“But it’s much different having to coordinate between nine officials, as opposed to having folks who are representing you specifically,” DiFilippo said.

The redistricting clause in Pennsylvania’s constitution states that county and municipal borders should not be cut by legislative districts “unless absolutely necessary.”

If this was adhered to, and the maps drawn to keep representation county-oriented, Cumberland should have at least four state representatives whose districts are entirely within in its borders, Hertzler said. But the definition of “absolutely necessary” is nebulous.

“It makes no logical sense the way it has been done,” said Nancy Kornhaus Griffe, chair of the Silver Spring Board of Supervisors.

Redistricting reform in Pennsylvania would most likely require an amendment to the state’s constitution, which specifies that redistricting be performed by a legislative commission, consisting of appointees of the state’s House and Senate majority leaders. Those four members then select a fifth member, who may be picked by the state Supreme Court in case of a deadlock.

Looking at Pennsylvania’s districts over the years, one cannot help but notice that they have become increasingly oddly shaped in order to rope in pockets of reliable voters for either the Democratic or Republican party, thus solidifying their hold on a given seat.

The result, the commissioners believe, is that legislators have retreated to their party corners and played to their base, given their lopsided districts.

The most recent reform proposal in Pennsylvania is a constitutional amendment that would create a commission of 11 citizens, none of whom hold elected office, to redraw the electoral maps after every census. The commission would include four members each from both of the state’s largest parties, plus three members registered as independents or with third-party groups.

None of the commission members could hold elected office or have family ties to political interests, said Fair Districts PA member Ron Skubecz.

Unlike in some other states that have enacted redistricting reform, Pennsylvania has no mechanism for voters to directly call for a constitutional referendum. The Legislature must approve a referendum first. Bills to bring the citizens’ commission proposal to referendum are logged as PA House Bill 722 and PA Senate Bill 22, both of which have attracted bipartisan support, but so far not a majority.

Time on the effort is short, as the Legislature would need to give an initial “yes” vote on the referendum by the end of 2018 for the change to occur by 2021, when the results of the 2020 census will be released for states to re-apportion their districts.

Otherwise, redistricting reform would be dependent on the courts. The League of Women Voters has a gerrymandering suit challenging the way that the redistricting commission drew Pennsylvania’s map in 2011, based on the 2010 census allocation update. The case could be heard soon by the state Supreme Court.

The league’s suit relies on three potential ways to define a measurable level of gerrymandering. The first relies on computer modeling to simulate all possible district boundaries, and then compares the compactness of these districts with those that have been drawn by legislators.

The second is a mathematical model known as the mean-median gap, and the third is the aforementioned efficiency gap, which is also being used in the Wisconsin case.

That model, Niebler said, measures the extent to which votes are being wasted by creating wide-margin and slim-margin districts through a technique known as “packing and cracking.”

An advantage is gained through gerrymandering when one can “pack” the opposing party’s’ voters into a limited number of districts, which vote reliably in opposition, but whose total number of legislative seats is limited.

One then creates districts that have reliable majorities of one’s own voters, but also include “cracked” portions of opposition pockets, in order to absorb opposition votes into districts that will still vote in favor of your own party.

The efficiency gap in Pennsylvania indicates that Republicans have “packed and cracked” Democrats to gain an advantage, Almeida said.

But the opposite is true in other states. The League is also representing a group of Republican voters in Maryland, where the statehouse maps have been gerrymandered in favor of Democrats, Almeida said.

Getting Republican legislators on board with redistricting reform in Pennsylvania is difficult because it helps them maintain a majority, even though it often requires them to divide Republican voters in bizarre ways in order to maximize their district coverage, as has been done in Cumberland County.

“My concern, as a lifelong Republican myself, is that this process will come back to hurt my party as well,” DiFilippo said.

If the redistricting process continues as is, with its blatant conflict of interest, the only recourse will be through the state’s Supreme Court, which has a liberal background.

“If this continues to be deadlocked, it’s pretty clear where this is going to go, and you could just as easily see the tables turned,” DiFilippo said.

Pa. to increase indoor, outdoor event capacity on May 17

The Wolf administration announced Tuesday it is increasing maximum capacity restrictions for indoor and outdoor events on May 17, ahead of lifting the limits completely on Memorial Day.

Voter ID is a flashpoint in Pennsylvania election law talks

The renewed fight over Pennsylvania's election law comes as Republicans wage a campaign to tighten voting laws in other political battlegrounds, including Georgia, Florida, Iowa, Texas and Arizona, spurred on by Trump's baseless claims about election fraud.

In the first vote of its kind since the coronavirus outbreak, voters statewide will decide twin constitutional amendments that would give lawmakers much more power over disaster declarations.

A look at the referendum questions on this year's primary ballot

Audience members listen as Vince DiFilippo, chairman of the Cumberland County Board of Commissioners, speaks during a redistricting meeting at Anita Tuvin Schlechter Auditorium in Carlisle.

Nancy Konhaus Griffie, chair of the Silver Spring Township Board of Supervisors, says it 'makes no logical sense' to split the township into two state House districts.

Vince DiFilippo, chairman of the Cumberland County Board of Commissioners, speaks.

A redistricting meeting at Anita Tuvin Schlechter Auditorium in Carlisle.

Bill Schneider of the Cumberland Valley chapter of Fair Districts PA says much of the frustration people have with government and politics can be tied to gerrymandering.