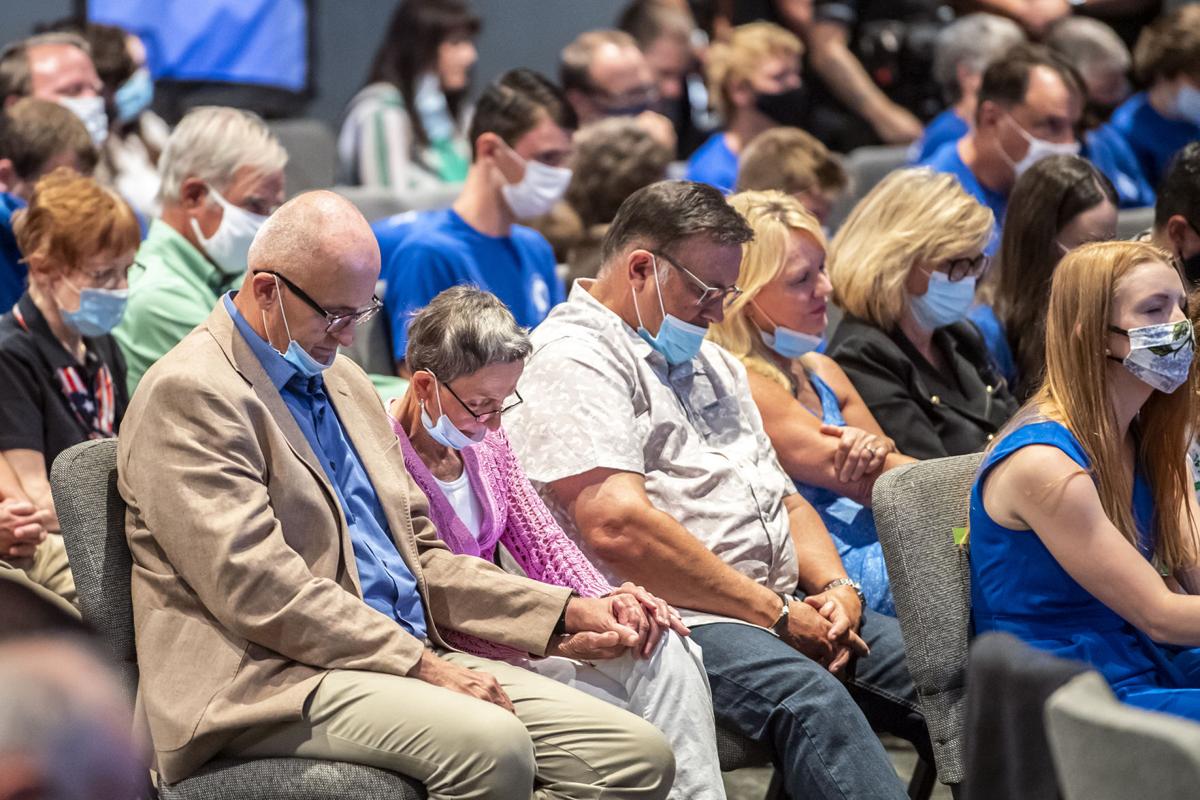 People pray before an event with Vice President Mike Pence in Export, Pa. a Pittsburgh suburb. 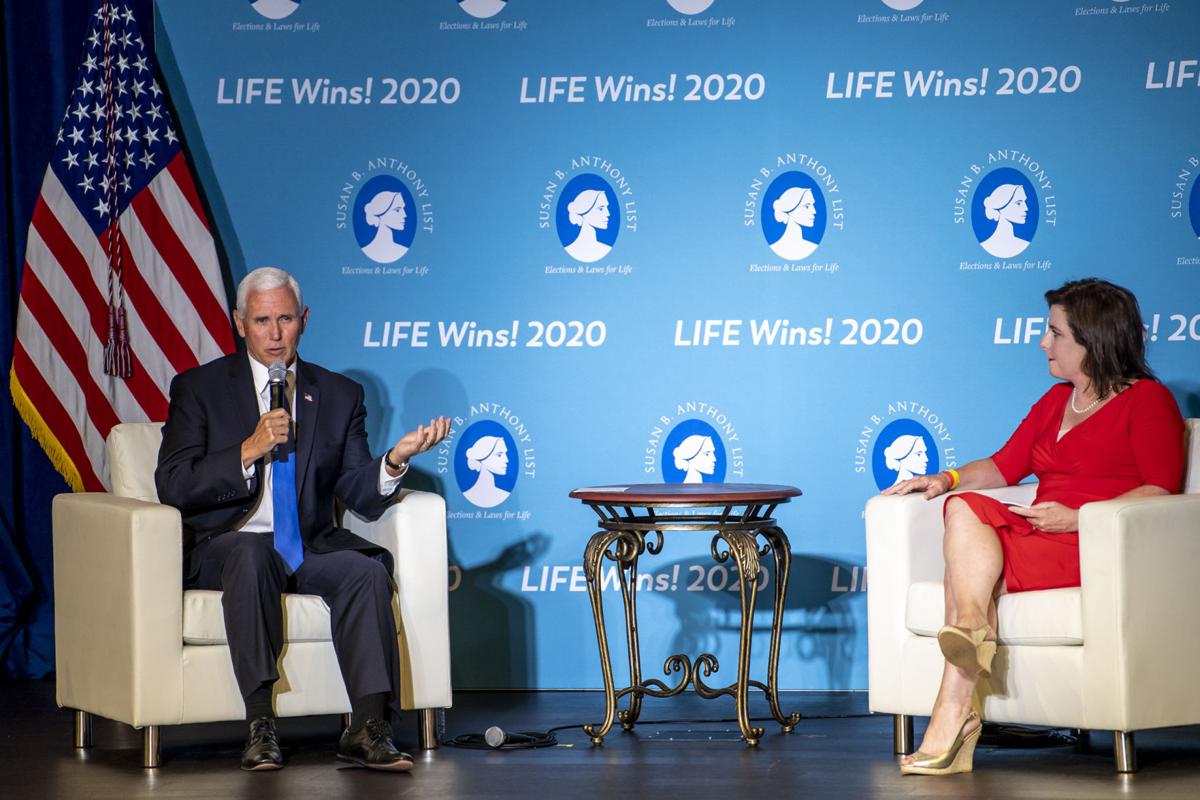 HARRISBURG — President Donald Trump’s homestretch push to repeat his razor thin victory in Pennsylvania four years ago won’t happen without white evangelicals, and there are signs that critical component of his coalition hasn’t lost the faith.

It’s a group that has often made the difference for Republicans on the Pennsylvania ballot. And while some born-again voters had misgivings about Trump in 2016, they helped him eke out a 44,000-vote margin of victory in the state. This time around, they sound eager to repay him for supporting their agenda.

Trump’s policies have helped keep in the fold evangelicals who otherwise might have been discomforted by his style. Their opinions on a range of political issues make them among the least likely voters to jump to former Vice President Joe Biden, the Democrat.

A recent NBC News/Marist poll in Pennsylvania found 79% of white evangelicals saying they will vote for Trump in this year’s presidential election.

More Biden, Trump visits this week in fight for Pennsylvania, including stop at HIA

“Many of us who support the president wish sometimes he didn’t say the things he did, wish he had a character more in line with scriptural teachings,” said Laszlo Pasztor, a retired military officer from Carlisle who organizes evangelicals politically. “Many of us say he’s a work in progress. However, his policies, nevertheless, have probably been more Christian than the policies of any president in my lifetime.”

The Biden campaign frames “the real religious issue” at stake as systemic racism, while evangelical Trump voters point to his support for anti-abortion efforts, school choice, religious freedom and the movement of the U.S. embassy in Israel to Jerusalem.

Like-minded judicial appointees are key to the evangelical political agenda. Trump has had a transformative impact on the courts system: Last year, the number of federal judicial appointees approved by the U.S. Senate was more than twice the annual average over the past three decades. And conservatives have now set their sights on what would be the Trump administration’s third U.S. Supreme Court seat, following the death of Justice Ruth Bader Ginsburg on Friday.

The vacancy is “an opportunity, albeit it’s going to be quite turbulent and challenging because of the timing,” Pasztor said, adding that participants in an online video conference for evangelical campaign efforts on Saturday morning prayed for “the comfort of Ginsburg’s family.”

Evangelicals, Christians who generally have had a “born again” personal religious conversion or awakening, form a significant slice of the electorate. They believe in the Bible as God’s literal word and embrace an activist aspect to their faith. Trump was raised as a Presbyterian, a mainline Protestant denomination, and Biden is a practicing Roman Catholic.

White evangelical voters made up 17% of the 2018 midterm electorate in Pennsylvania, according to an AP VoteCast survey. And a Pew Research Center analysis found 20% of voters nationwide in the 2016 election were white evangelicals; 77% of them backed Trump. Black Protestant voters often share religious views with white evangelicals, but they largely vote Democratic.

While evangelical voters are scattered across Pennsylvania, they are most concentrated in the T-shaped swath of farm and forest land outside the greater Philadelphia and Pittsburgh regions.

Larry Denver, who helped found the Faith and Freedom Coalition state chapter, said his enthusiasm for Trump has grown since 2016. Like many other evangelicals, Trump was not his first choice four years ago — he favored U.S. Sen. Ted Cruz of Texas in the Republican primary.

“Throughout the scriptures, God has done most of his work through the most unlikely people,” said Denver, a retired veteran from the Philadelphia suburbs. “The people he picks are not normally the ones you’d think would be involved.”

Trump is “using white evangelicals, he’s playing on their anti-intellectualism,” said John Fea, an American history professor at Messiah University outside Harrisburg and an evangelical churchgoer who has written extensively about evangelicals in politics and public life.

“I feel that most white evangelicals who support Trump are often sacrificing the integrity of the office of the president,” Fea said. “They’re supporting a person — the list goes on — a liar, someone who has constantly played with racist language.”

Biden’s campaign hopes to make some inroads, with plans to launch an “evangelicals for Biden” effort next week, according to Josh Dickson, the campaign’s national faith engagement director.

“In this moment, there is a stark moral contrast between the common good values of the Biden-Harris agenda, which deeply aligns with the values of people of faith, and the agenda of the current administration, which is based in divisiveness and fear,” Dickson said in a statement.

Fea said Biden may be able to reach enough evangelicals to make a difference in a close race, particularly around Philadelphia, but he sees in evangelicals devotion to a political effort that has been entrenched for decades.

Evangelicals often cite Trump’s vice presidential selection of Mike Pence, who championed evangelical issues while an Indiana congressman and governor, as a turning point in getting behind Trump. They’ve noticed when Trump and Pence have brought up faith and made other religious references in public remarks.

“We have a vice president that not only speaks our language but has shown day in and day out that he is a man of God,” said Justin Behrens, an evangelical Christian who chairs the Republican Party in Luzerne County, which Trump flipped in 2016 with a 25-point swing from President Barack Obama’s reelection.

Trump needs his appeal to evangelicals to pay off ahead of the Nov. 3 election with campaign help, donations and the type of energy that makes someone persuade fence-sitting friends and neighbors.

Pasztor has been volunteering with the Trump Victory Faith Coalition’s local organization and organizing voter registration drives, poll workers and neighborhood networks within the evangelical community, to reach those who did not turn out for Trump in 2016.

What remains to be seen is how the evangelical vote will play out at a time when the coronavirus pandemic is limiting the informal Sunday political talk at churches. Trump needs to energize that evangelical, churchgoing part of his base to claim Pennsylvania’s 20 electoral votes.

Evangelical voters “tend to be competitive, they tend to be out front, they tend to be more involved, they go to rallies,” said veteran Pennsylvania pollster Terry Madonna, a political science professor at Franklin & Marshall College. “They are critical.”

Get Election 2020 & Politics updates in your inbox!

Keep up on the latest in national and local politics as Election 2020 comes into focus.

The Department of State, which handles election-related matters, has fielded and passed along about 39,000 queries from people who want to work the polls.

How to fill out a vote by mail ballot

How to fill out a vote by mail ballot

People pray before an event with Vice President Mike Pence in Export, Pa. a Pittsburgh suburb.