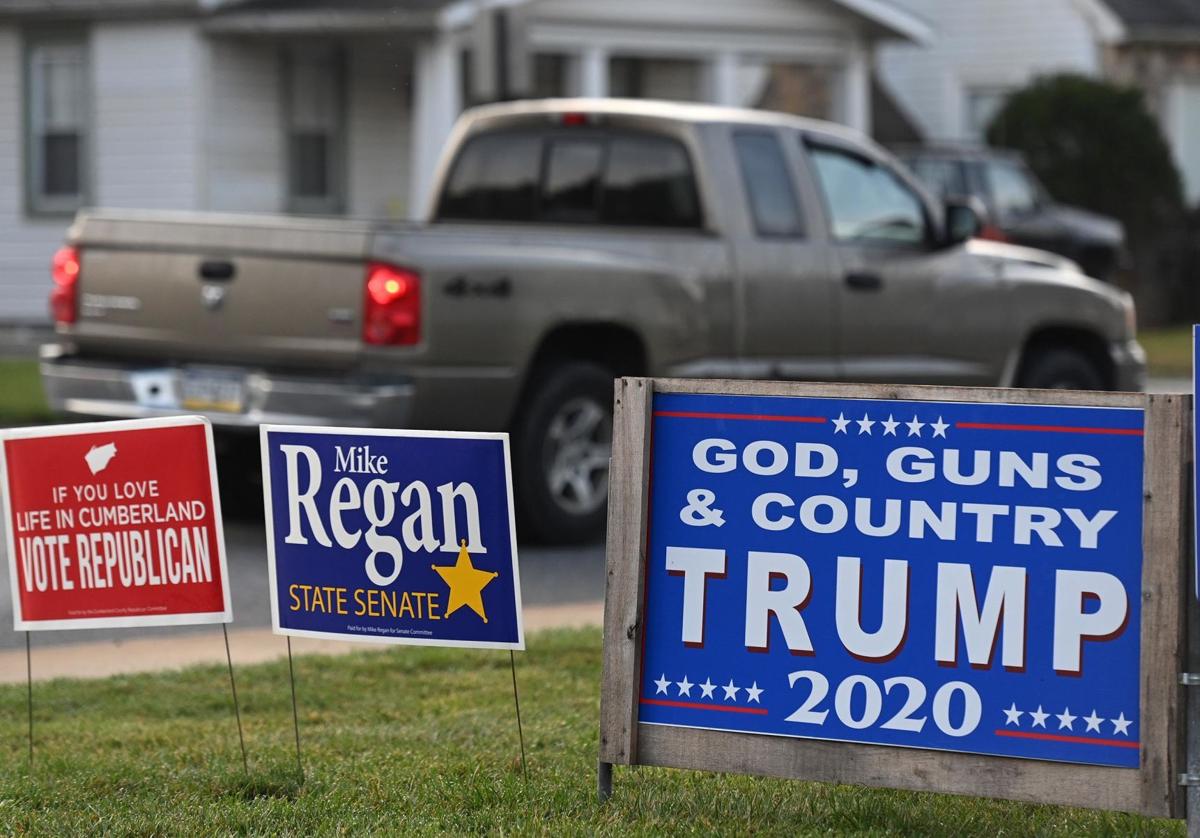 Signs indicate support for President Donald Trump. This year, many people are reporting that their signs have been vandalized and stolen. 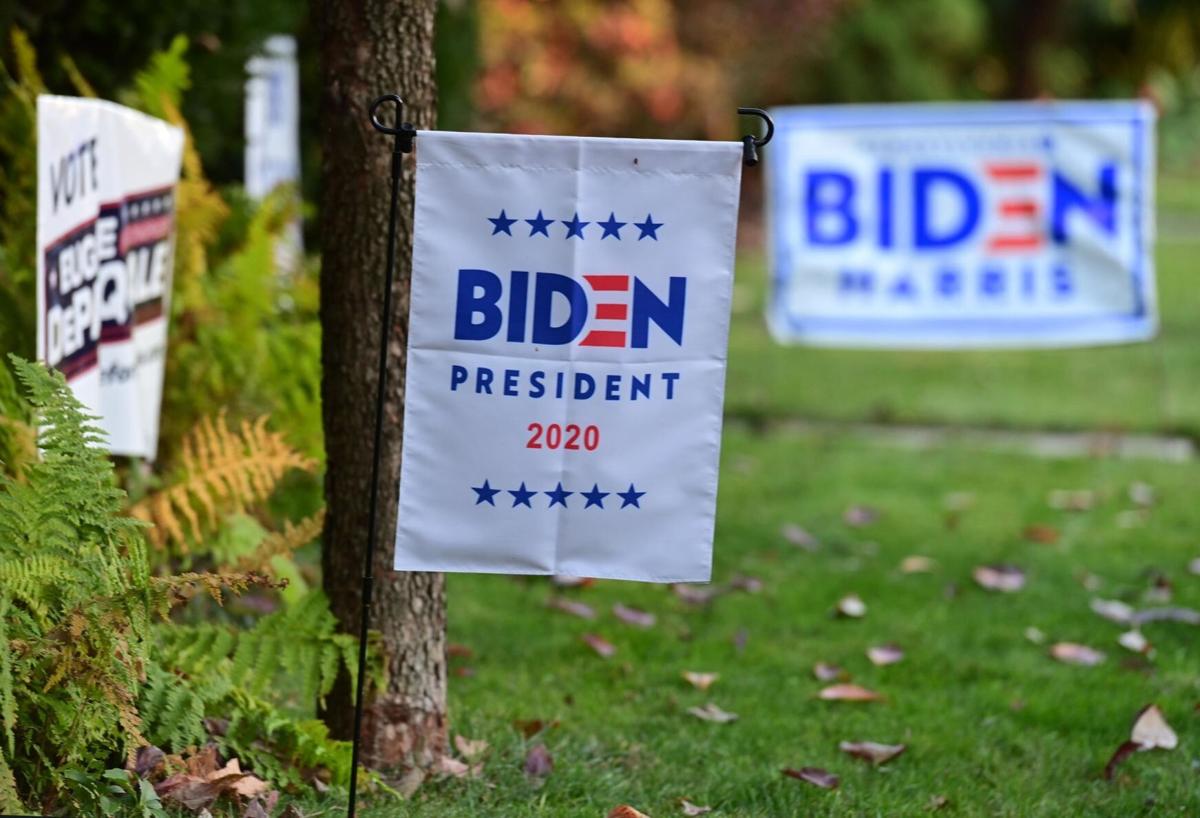 Signs show support for former Vice President Joe Biden, the Democratic Party nominee for president. County police have posted reports and requests for public assistance in sign thefts, but it appears few if any are solved. 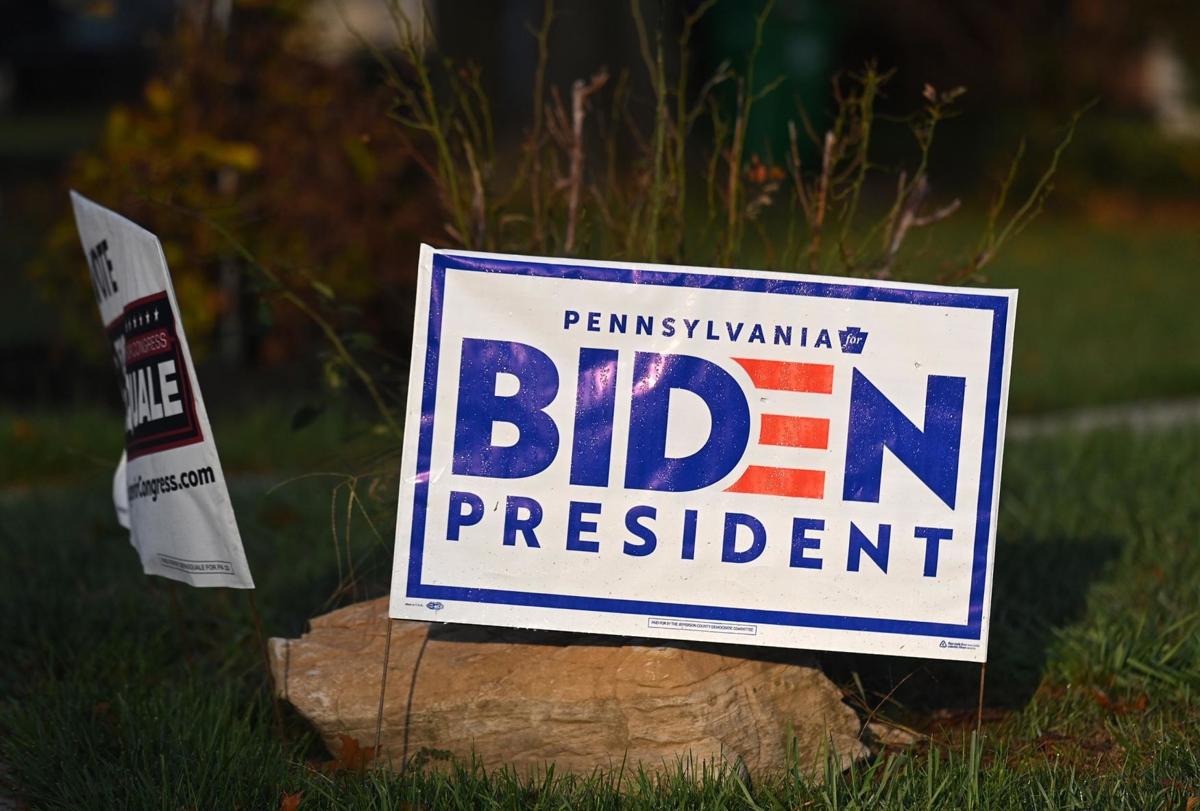 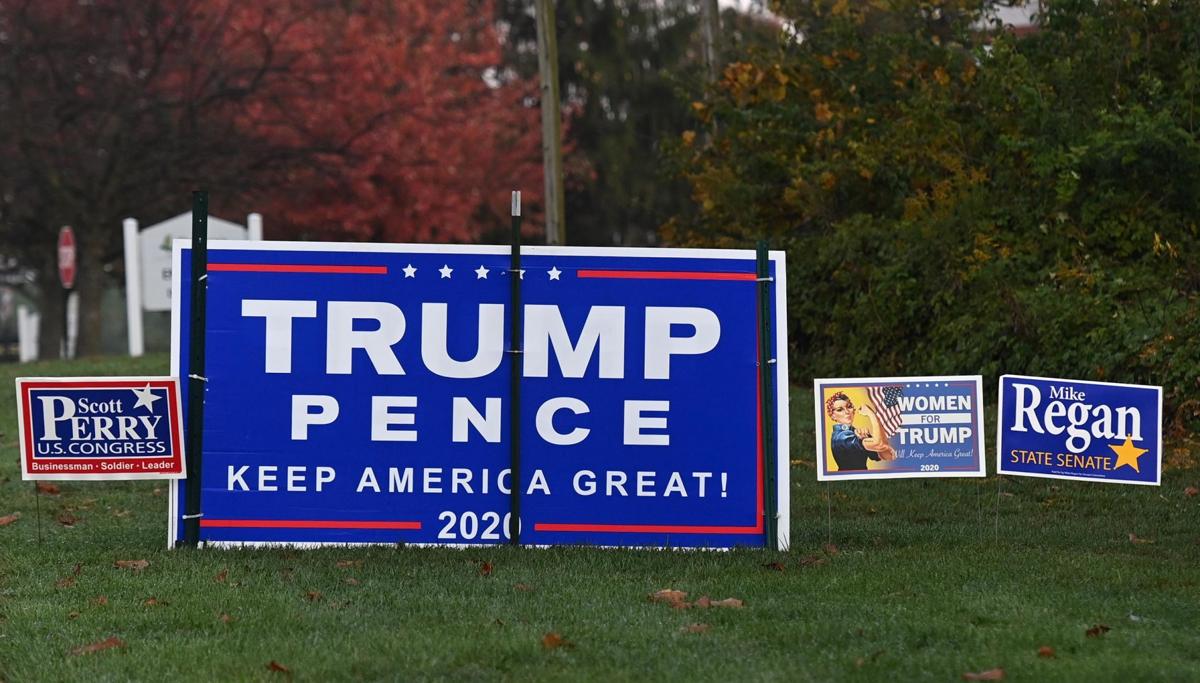 On the eve of an election in a year when American partisanship has never been measurably higher, the nation’s heightened polarization can be seen, quite literally, in the yards of many Cumberland County homes and businesses.

By all accounts, the vandalism and theft of political signs has never been more intense than it has been in the run-up to the 2020 election, with local leaders from both parties citing a number of instances, and local police going out of their way to remind people to keep it civil.

“We have gone out of our way to issue a statement to tell people stop messing with the signs,” said Maurice Reeves, a local leader with the Cumberland County Democratic Committee.

Some of the vandalism isn’t just casual theft or defacement of small yard signs — a 4-by-8-foot sign that Reeves said he permanently anchored was destroyed last month.

“We put it in with two 6-foot metal fence posts and zip ties and they took it right off,” Reeves said.

Watch Now: Learn more about the 2020 election and voting during the pandemic

Republican signs have befallen similar fates, with the Cumberland County Republican Committee frequently posting images of torn up or spray-painted Trump/Pence signs around the county.

“No candidate’s sign should be destroyed. We must show civility to one another during this election season,” the GOP committee wrote.

Petty vandalism by mischievous youths certainly accounts for a portion of political sign thefts and vandalism. But some people say that an increasing portion of the crimes are expressly political, and clearly not the work of errant teens.

Streets full of Biden/Harris signs in the Mechanicsburg and Upper Allen Township area had Trump bumper stickers affixed to them, according to Robin Agerton, an activist with the Upper Allen/Mechanicsburg Democratic Club.

Election 2020 Preview: A look at Congressional races on the Cumberland County ballot Nov. 3

Agerton’s own signs at her home in Mechanicsburg borough were spray-painted over or stolen multiple times until she affixed them to her porch. She said her neighbors trained security cameras on their Biden/Harris sign with the warning “smile, you’re on camera” written on it.

Reeves said he and several others he knows have done the same.

“I think if the camera weren’t there, they probably would’ve been gone by now,” Reeves said of his signs.

“I don’t believe this is kids,” Agerton said. “My only concern is that it escalates. Our police shouldn’t have to be dealing with this.”

However, they are. Police agencies across the county have posted reports and requests for public assistance in sign thefts, although it would appear few if any are solved.

“It’s a pain for them to take these calls all the time, but they want us to keep calling them, just to document it,” Agerton said.

In June, someone stole a 6-by-12-foot Trump sign from Wilson Street in Carlisle. Valued at $90, it was not immediately recovered, Carlisle Borough police reported.

In September, Camp Hill Borough police issued a blanket reminder, in light of allegedly rampant sign theft, that “every citizen has the right to place political signs of their choice in their yard” under the First Amendment of U.S. Constitution.

“I think what we’re seeing on social media and on the news is playing out in our communities,” Agerton said. “I think the partisanship at the presidential level is trickling down.”

Polling indicates that that is the case in the United States, and has been growing for some time. Pew Research polling conducted in September 2019 found that 55% of Republicans and 47% of Democrats believed members of the opposite party were “more immoral” than the average American, versus 47% and 35% of respondents, respectively, three years earlier.

Likewise, 63% of Republicans see their Democratic neighbors as “more unpatriotic” than the baseline American; 75% of Democrats see Republicans as “more close-minded,” according to Pew data.

These feelings are not confined to the realm of politics. Pew data shows only 45% of Democrats and 38% of Republicans agree that members of the opposing party share other values and goals, even if they disagree about politics, with a majority of Americans now feeling that they lack common ground with their political opponents even outside the realm of electoral politics.

Primary Preview 2020: A look at contested races on June 2

Check out our preview of contested races in this year's primary on June 2.

In this June 2019 file photo, a paper ballot is shown during a demonstration of the ExpressVote XL voting machine at the Reading Terminal Mark…

When the Pennsylvania Supreme Court redrew the congressional districts in the state two years ago, U.S. Rep. Scott Perry’s seat went from a Re…

State Rep. Greg Rothman is one of a few legislators this year who won’t face any challenges in the primary but could see a difficult battle in…

Though the only legislator in the area, state Rep. Mark Keller was one of a large number across the state to not seek reelection this year. Hi…

Wednesday's event, hastily organized by Republican state lawmakers, including Pennsylvania state Sen. Doug Mastriano, an outspoken Trump supporter, came with trappings of an official hearing — flags, a gavel, and unsworn “witnesses” who “testified” in person and by phone.

The three judges on the panel were all appointed by Republican presidents.

Republican U.S. Rep. Mike Kelly is leading a suit filed Saturday in Pennsylvania challenging the use of mail-in ballots predominately cast by …

HARRISBURG — Democrat Joe Biden has been certified as the winner of the presidential election in Pennsylvania, culminating three weeks of vote…

Now, as the legal doors close on Trump's attempts to have courts do what voters would not do on Election Day and deliver him a second term, his efforts in Pennsylvania show how far he is willing to push baseless theories of widespread voter fraud.

In blistering ruling, judge throws out Trump suit in Pa.

“They have failed to allege that even a single mail-in ballot was fraudulently cast or counted,” Justice David Wecht wrote in a concurring opinion.

Some of Cumberland County’s legislators have waded into the claims of voting improprieties being made by Pennsylvania Republicans, allegations that are in-line with President Donald Trump’s strategy.

Signs indicate support for President Donald Trump. This year, many people are reporting that their signs have been vandalized and stolen.

Signs show support for former Vice President Joe Biden, the Democratic Party nominee for president. County police have posted reports and requests for public assistance in sign thefts, but it appears few if any are solved.