Become a Member
Read Today's E-edition
Share This
Election 2019: What's the deal with those voting machines in Cumberland County?
0 Comments
Share this
1 of 2 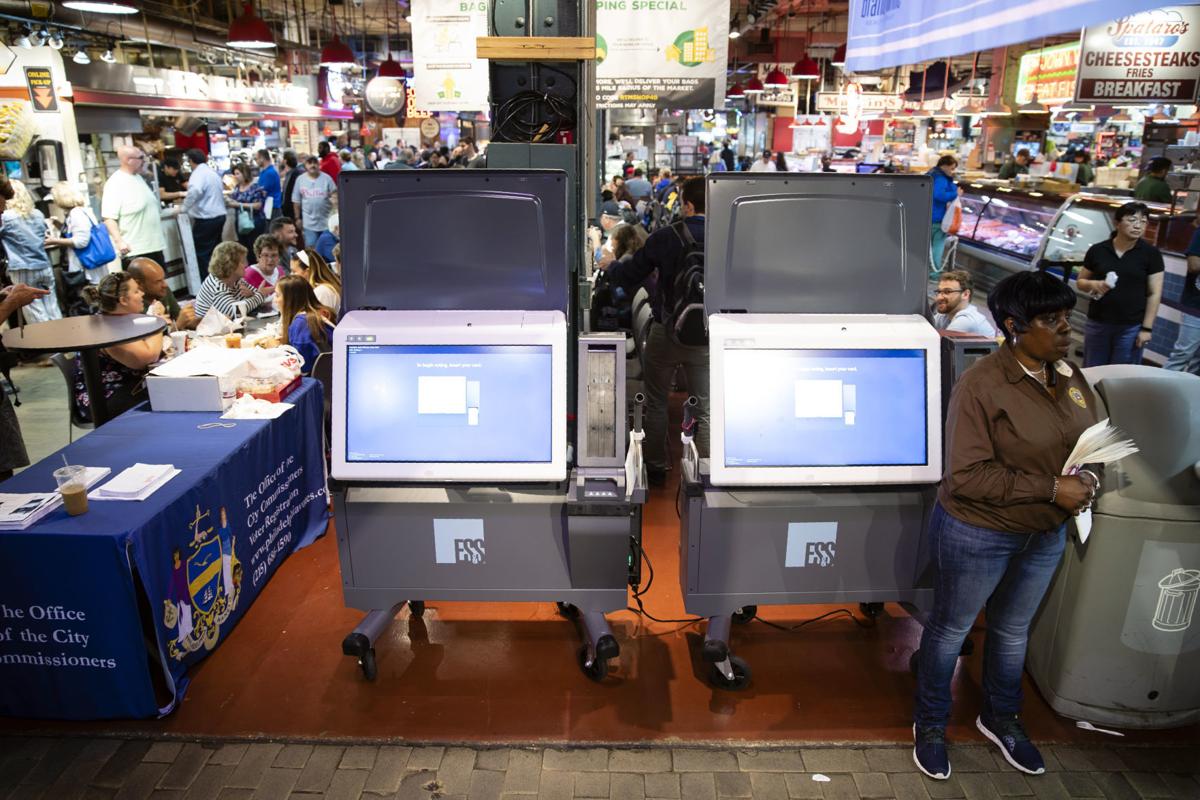 ExpressVote XL voting machines are displayed during a demonstration at the Reading Terminal Market in Philadelphia. 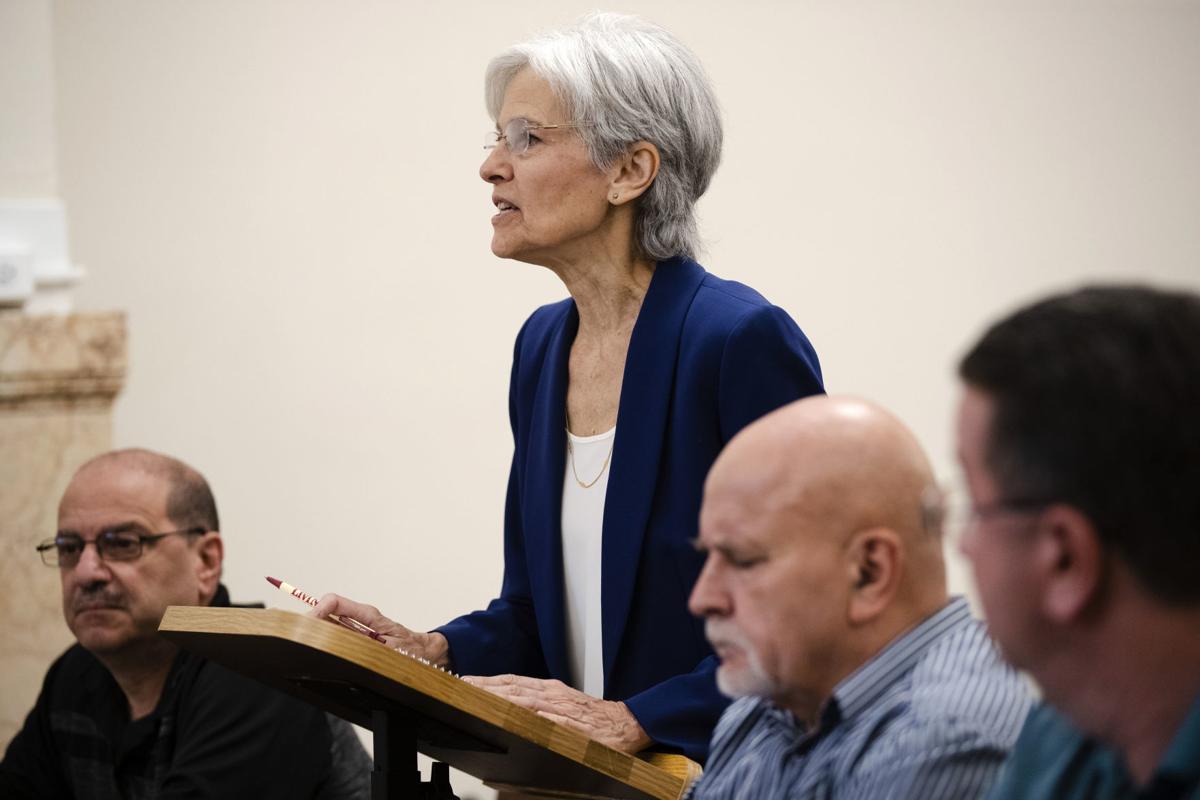 Former Green Party presidential candidate Jill Stein wants Pennsylvania to block Philadelphia from using new touchscreen machines it's buying ahead of 2020's elections and is threatening court action if it doesn't do so promptly.

Cumberland County voters won’t be using new election machines for next month’s ballot, but they will be for the April 2020 primary, assuming the situation with Pennsylvania’s voting machine certifications holds out.

After some confusion over the interest rate being charged by Election Systems and Software for the county to purchase the company’s voting machines, county commissioners passed a reimbursement resolution last month to facilitate buying machines and reimbursing the cost with third-party financing.

Officials from Cumberland County’s finance office said the county could get an interest rate of 2% to 3% on a bond or bank financing, as opposed the 5% interest ES&S is charging through its own lease deal.The ExpressVote XL, which ES&S advertises as its top-of-the-line system, is expected to start arriving in Cumberland County in December, with enough lead time to have the machines configured and poll workers trained in their use by the presidential primary.

But one issue is still outstanding: the request by former Green Party presidential candidate Jill Stein to have the ExpressVote XL decertified by the Pennsylvania Department of State.

Stein submitted a letter to the Department of State last week, asserting that its certification of the ExpressVote XL as a permitted machine violates the terms of her November 2018 settlement with the state over the 2016 election. Under the terms of the settlement, the department has 30 days to respond.

It appears unlikely that the department will de-certify the machines voluntarily, given that it already declined to do so in a report issued last month. That report was in response to a request from voting rights groups who had similar complaints to Stein’s.

If dissatisfied with the State Department’s response, Stein could take the issue back to Commonwealth Court, where she spent two years fighting for a recount amid claims that Pennsylvania could not truly verify the accuracy of its 2016 election results.

Stein’s settlement required the state to produce auditable paper records in future elections, a move that Gov. Tom Wolf was already in the process of making. Wolf subsequently announced that the Department of State would de-certify machines that did not produce paper records prior to the 2020 primary, creating a rush by Pennsylvania counties to update their voting equipment.

Stein’s complaint to the Department of State regarding the ExpressVote XL is that it does not create a “voter-verifiable record of each vote” in accordance with the language of her settlement.

The source of this dispute is the same feature that caused Cumberland and other counties to select the machines in the first place: They’re an all-in-one ballot-marking device.

When selecting the machines earlier this year, county officials said they preferred the ES&S offering over devices in which a ballot is marked by hand, or marked using a separate electronic selection-marker, and then fed into a scanner.

The ExpressVote XL marks and collects ballots without the user having to touch the paper, reducing room for user error, county officials said.

The ES&S machines operate via a touch-screen. After voters select their candidates, the machine prints the selections on a card, which is fed behind a clear window through which voters can check their selections. The voter then hits a verification button, after which the card is scanned by the machine and kept in a container to be used in case of an audit or recount.

But Stein’s complaint is that, while the voter sees their candidate selections printed in plain English on the ballot card, that isn’t what the machine itself scans to count the votes. Instead, the ExpressVote XL prints a bar code on the bottom of the card that reflects the voter’s selections.

Stein argues that means that voters cannot verify who they are actually voting for, since humans cannot read bar codes.

“The voter can verify the text, but not the bar code. But the ExpressVote counts the bar code, not the text, as the voter’s vote. Voters must be able to verify their own votes with their own eyes,” Stein’s attorneys wrote.

“No voter can know if the bar code accurately reflects his or her vote. Unless that fundamental problem is corrected, the ExpressVote may not, consistent with the Settlement Agreement, be used in the commonwealth,” Stein’s letter continued.

However, the Department of State addressed the bar code issue, in part, in its report last month, written in response to the petition from voting rights groups.

In the report, the department indicated that there is no reason to believe that the bar code printed on ExpressVote XL ballots would be inconsistent with the voter-readable text.

The core issue raised in the report is that the paper ballot cards from the ExpressVote XL pass over the print head a second time on their way to the ballot storage box, which security advocates said means that a machine could be tampered with to alter the ballot after it is cast.

Stein also argued this point in her letter to the department last week, saying that the possibility of a false vote being printed after voter verification prevents the ExpressVote XL from “supporting a robust pre-certification auditing process” as defined under the terms of the 2018 settlement.

However, the Department of State wrote in its report last month that examiners “attempted to change the tabulation of the vote by modifying the bar code on the paper vote summary record after verification by the voter but were unsuccessful,” and also reported “that the system executables and bar codes have mechanisms in place to detect unauthorized modification.”

The department also said over the summer that, in the case of a recount, ballots will be counted by reading the text names printed on the ballot, and the bar code will not be used.

“The department instructed counties and has placed conditions on all equipment that produces ballots with bar codes that the plain text selections of the voter are the official record of votes cast,” Department of State spokesperson Wanda Murren wrote in July. “The plain text is what will be used for recounts, challenges and audits.”

HARRISBURG — Gov. Tom Wolf said Tuesday he is ordering a bond issue to help Pennsylvania’s counties pay for new voting machines ahead of 2020’…

If the department declines to de-certify the ES&S machine in response to Stein’s letter, the issue could be adjudicated by the Commonwealth Court.

In a Facebook post last week, Stein indicated that she would seek to have the courts force a de-certification if the state was not amenable.

“If Pennsylvania refuses to uphold our agreement by decertifying the ExpressVote XL, we’ll have to ask the court to enforce it,” she wrote.

This would throw a wrench into Pennsylvania’s voting machine overhaul. Philadelphia has also selected the ExpressVote XL and plans to use the new devices in next month’s election.

For Cumberland County, the cost of buying machines for all 118 of the county’s voting precincts will run close to $4 million, before any interest.

The county should receive $274,000 from Pennsylvania’s share of federal appropriations under the Help America Vote Act, county officials said this summer.

Election 2019: Candidates vie for seats in contested races this November

In next month’s general election, there are candidates seeking state, county, municipal and school board positions across Cumberland County.

Members Only: Helping with your plans for Nov. 5

What do you have planned on your schedule for Nov. 5?

Bill could usher Pennsylvania elections into a new era

Pennsylvania lives in a cave when it comes to modern elections, critics say, but fast-tracked legislation that was quietly negotiated behind closed doors could usher in some advancement.

ExpressVote XL voting machines are displayed during a demonstration at the Reading Terminal Market in Philadelphia.

Former Green Party presidential candidate Jill Stein wants Pennsylvania to block Philadelphia from using new touchscreen machines it's buying ahead of 2020's elections and is threatening court action if it doesn't do so promptly.