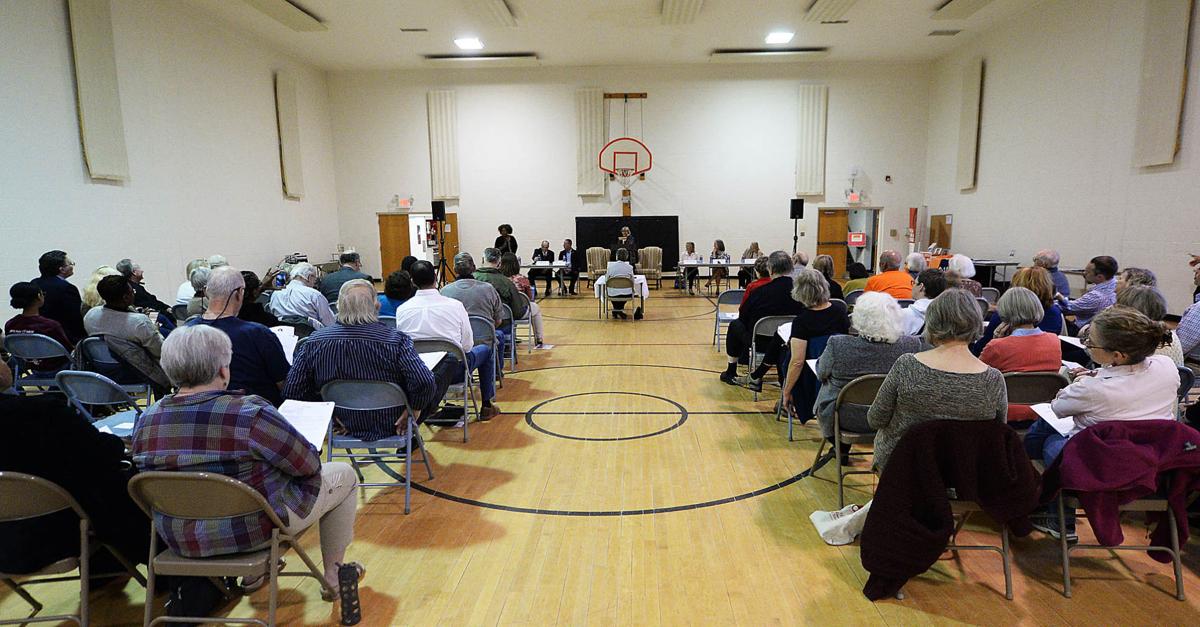 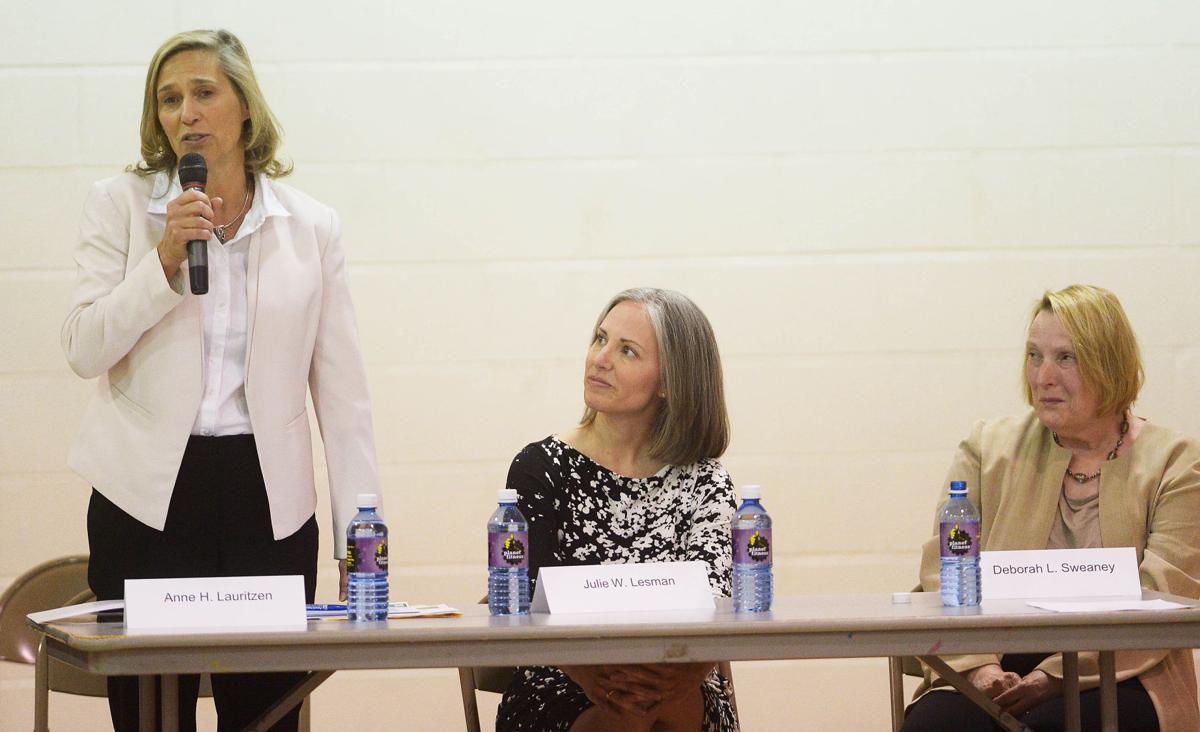 Anne Lauritzen speaks during the Carlisle school board candidate forum at the Carlisle YWCA as Julie Lesman, center, and Deborah Sweaney look on. 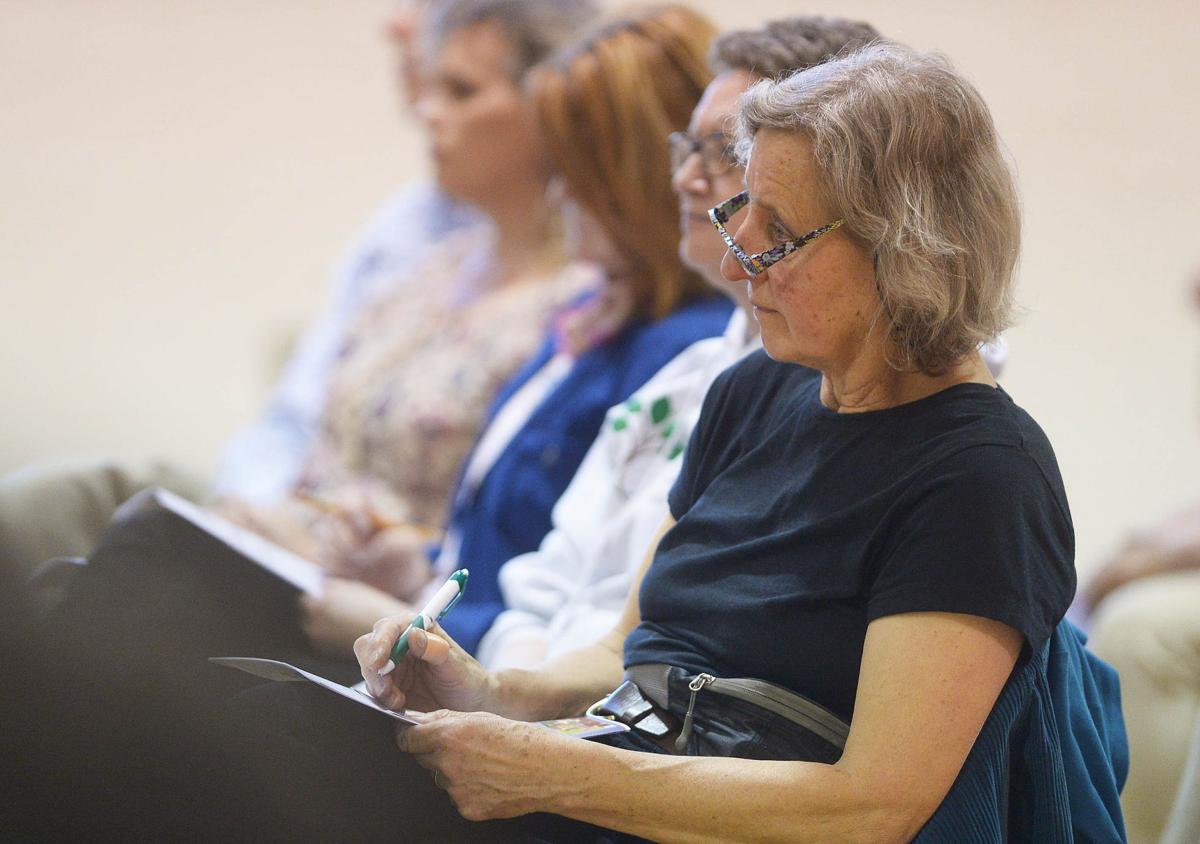 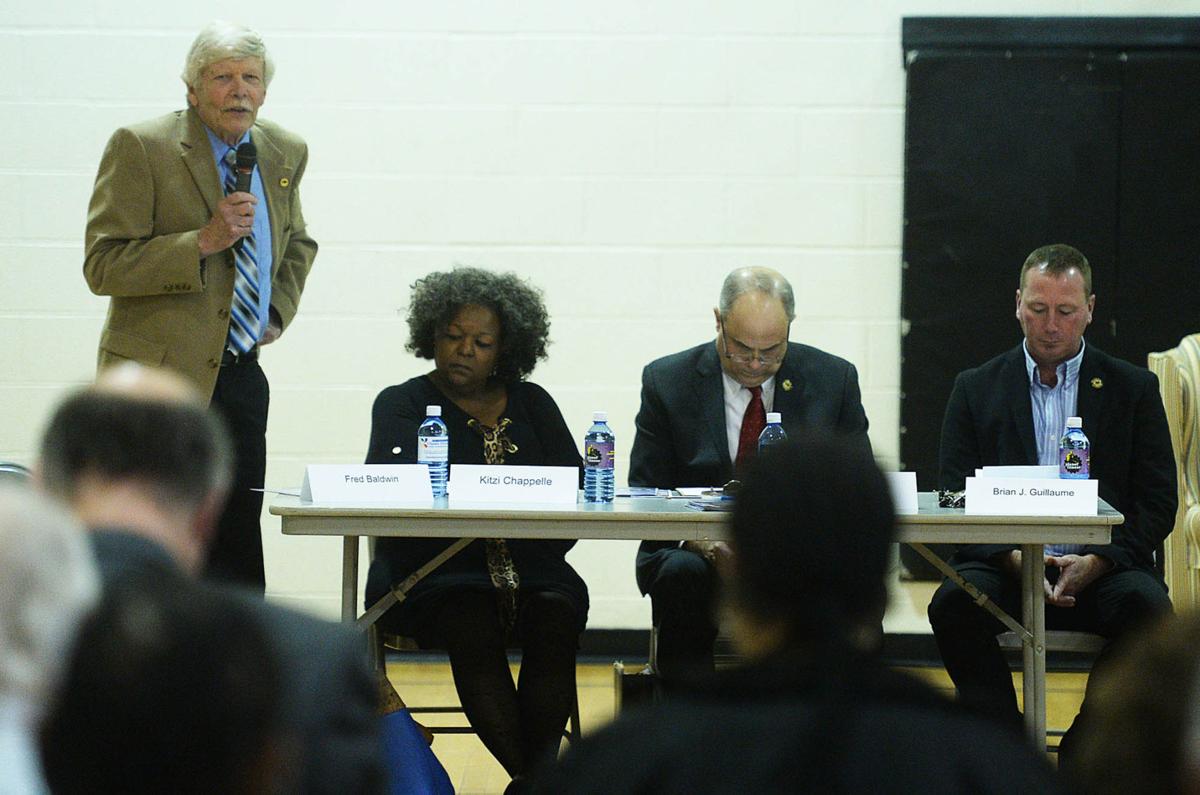 Fred Baldwin speaks during the Carlisle school board candidate forum.

Candidates for the four-year terms on the Carlisle School Board fielded questions Tuesday night on topics ranging from budget issues to the search for a new superintendent to a weight room to be added to the David R. Swartz building of Carlisle High School.

All candidates on the primary ballot participated in the event, which was held at the YWCA Carlisle at 301 G St. The six candidates are vying for four open seats on the school board in the May 16 primary.

Kitzi Chappelle will appear on the Democratic ballot while Rick Coplen, Brian Guillaume, Anne Lauritzen, Julie Lesman and Deborah Sweaney have all cross-filed and will appear on both Democratic and Republican ballots.

Patricia Fox of the League of Women Voters moderated the forum, which was co-sponsored by the Carlisle chapter of the American Association of University Women. The forum featured questions that had been provided to the participants in advance as well as questions submitted by the audience via index cards.

Candidates generally agreed with each other on the major issues facing the district.

The question of funding charter schools was one area of general agreement. Candidates had mutual concerns about accountability of the charter schools in their use of taxpayer money that goes to the schools from CASD, and their hopes that the Legislature would address charter school funding.

Coplen said charter school students take $1.4 million to $1.5 million out of the district’s budget each year, and that the schools should be “very limited if not nonexistent in this area where students are well served by public schools.”

Carlisle’s cyber charter school gives parents an “in-house” option for their children’s education without draining from the budget, Guillaume said.

“That’s the best way to beat them to the punch,” he said.

The board also needs to look at what drives parents to consider a charter school by looking at what might be lacking in the district, Lesman said. She shared her own story of investigating a charter school for one of her children who, as a gifted student, would have benefited from being able to work above grade level. They chose the public school, but Lesman said the board needs to make sure that parents and the community know that tax money funds charter schools.

The announcement that Superintendent John Friend would retire June 30 prompted questions about the most important qualities of the next superintendent and the process for choosing that person.

Chappelle thanked Friend for his community involvement, and suggested the next superintendent share that dedication.

In addition to someone skilled in community engagement, Coplen said the district needs a “strategic thinker” who would understand the district and would have worked their way up through levels of leadership in a school district.

While Lauritzen said the board would set the priorities and goals for the new superintendent, she said she would look for someone of “impeccable integrity” who could keep an eye on the big picture as students move from kindergarten through 12th grade.

Lesman echoed that thought, saying the superintendent needs to be able to think long-range as students in the district are being prepared not for the world of today, but the world as it will be.

Sweaney said it was important to realize that the new person does not have to be exactly like Friend, and that the board would do its work with precision.

Candidates differed, however, on whether or not they would introduce their top choices for the position in a public forum.

Coplen, Guillame, Lauritzen, Chappelle and Lesman generally agreed that some sort of public forum may be possible, but Sweaney said she was “not sure I would want three candidates to come up here for a popularity contest with the public.”

In recent budgets, the board had taken up the administration’s recommendation to outsource such positions as food service and janitorial staff. In the budget under consideration, classroom aides would be outsourced as new hires are made after current aides retire or resign. This trend prompted a question from the audience as to the savings from such moves and where the line is drawn for outsourcing.

Candidates agreed that outsourcing saves the district money since it does not need to pay pension or health care costs for the outsourced employees. Sweaney said every person on the district payroll must have a full benefit package including a state-mandated pension, which stresses the operating budget.

“By removing people from the active roles, we were able to save a great deal of money,” she said.

Coplen, echoing a sentiment shared by other candidates, said the outsourcing is “the way to go — to a point.” He added that primary teaching staff should never be outsourced, and that the district has already reached what he would consider the upper limit of what can be outsourced.

Incumbent board members defended their recent decision to build a weight room, saying that it will benefit all of the students in that it can be used in physical education classes as well as by all of the district’s sports teams. Lauritzen and Guillaume, in particular, said the board had gone through a lengthy process of determining what shape the weight room would take as it went from a proposed separate building to an addition to a current building.

Chappelle said the extracurricular activities “are great,” but he asked if the cost of the room would support another educator or another aide coming into the classroom.

“We really need to think about how our tax dollars are being spent,” she said.

The suspended regulations cover a wide swath of government requirements, including licensing, inspections and training.

State regulations that have been suspended or waived under the disaster declaration will go back into effect, although that process in some cases may take months.

The detailed, complicated legislation will need approval by majorities of both Republican-majority chambers as well as Democratic Gov. Tom Wolf’s signature to become law.

There is no shortage of job openings for local election officials in Michigan. It's the same in Pennsylvania. Wisconsin, too.

Pennsylvania Republicans eye referendums to get past governor vetoes

The nearest opportunity for Republicans to get the election-related proposals on the ballot is 2023. Before that, the proposals must pass the Legislature twice in two consecutive legislative sessions.

Keep Pennsylvania Beautiful estimated that from 2014 to 2018, PennDOT spent more than $65 million in removing litter from within highway rights-of-way.

The resolution passed on near-party lines, 30-20, with just one Democrat in favor of it. It still required House approval to take effect, but does not require a governor's approval.

Gov. Tom Wolf has said he will veto the bill if it makes it to his desk.

Gift-ban legislation is routinely introduced and sees no action, despite pledges from top lawmakers to support it.

Anne Lauritzen speaks during the Carlisle school board candidate forum at the Carlisle YWCA as Julie Lesman, center, and Deborah Sweaney look on.

Fred Baldwin speaks during the Carlisle school board candidate forum.