By many accounts, Gov. Tom Wolf has helped contain Pennsylvania’s coronavirus outbreak and avoided the full-blown disasters seen elsewhere. His success containing the growing resistance to his efforts is to be determined.

In one of the premier battlegrounds in November’s presidential election, Wolf is struggling to fight a Republican-driven revolt over his stay-at-home orders and business shutdowns. Egged on by state GOP lawmakers, counties have threatened to defy Wolf while at least a few business owners have reopened despite his warnings.

The mild-mannered Wolf has had to decide how far to go in enforcing the orders, mindful of criticism that he’s nothing short of a tyrant.

And visiting the state Thursday was President Donald Trump, stoking the conflict with tweets such as one that said Pennsylvanians “want their freedom now.”

He told reporters before leaving Washington that Pennsylvania “ought to start thinking about opening it up. You have a lot of people who want their freedom, and they’ll get their freedom very soon.”

The political fight as much over people’s well-being and public health — federal health officials are aligned with Wolf’s cautious approach — as it is over who will be blamed for the state’s economic devastation if it is not on the mend by Election Day.

About 2 million Pennsylvania residents have lost their jobs since mid-March. Food and milk giveaways draw long lines. Some people have gone two months without money because of the state’s problem-plagued online unemployment benefits portal.

Like in swing states Michigan and Wisconsin, Republicans are trying to ensure that Democratic governors, rather than Trump, take the blame.

“Tom Wolf is going to be as much on the ballot as much as the president, the Legislature and Congress for his handling of this, but he’s going to be judged not just by Republicans but by Democrats and independents,” said Lawrence Tabas, chairman of Pennsylvania’s Republican Party.

For Democrats who have stood by Wolf, that’s just fine right now. Polls show that the public has generally embraced how Wolf — who easily won reelection in 2018 — has managed the crisis.

A Washington Post-Ipsos poll released Tuesday found that more than 2 in 3 people surveyed from April 27 to May 4 approve of how Wolf has handled the outbreak. Trump’s approval nationally in the same poll was at 43%.

Trump came to politically moderate Allentown area to tour a medical products distribution center. He did particularly well in the area in the 2016 election, when his narrow victory in Pennsylvania helped vault him to the White House.

Since then, Republicans lost the area’s congressional seat for the first time in two decades, and Allentown, with highways connecting it to New Jersey and New York City, has become one of Pennsylvania’s coronavirus hot spots.

“Here in the Lehigh Valley, people know we’re in the middle of the pandemic, and they also aren’t taking Trump as seriously as they once did,” said Democratic state Rep. Peter Schweyer of Allentown.

It was Trump’s 18th visit to the state as president, a marker of Pennsylvania’s importance to his reelection hopes.

While Trump’s advisers have started to doubt whether they can hold Michigan, another Rust Belt state Trump won, they believe Pennsylvania and Wisconsin remain in play if the economy rebounds. That may mean pressuring the states’ Democratic governors to ease restrictions on business, travel and public spaces, even if that approach risks a resurgence of the virus.

Pennsylvania is 10th among states in overall infection rate — with nearly 60,000 confirmed cases, or roughly 450 per 100,000 residents, and more than 4,200 deaths, according to federal statistics. It is bordered on three sides by states with higher infection rates.

New infections have been trending down, and Wolf has been easing restrictions in lightly affected counties, but not fast enough for some.

“I know my constitutional rights, and I’ve got to pay my bills,” Brad Shepler, a barber who resumed cutting hair — something prohibited in the state right now — told police in a video he posted online when they visited his home studio this week a few miles from Pennsylvania’s Capitol. “The governor’s not paying my bills, so I’ve got to pay my bills.”

To contain growing unrest, Wolf on Monday threatened to punish a growing number of counties that pledged to let businesses reopen against his orders.

Wolf, who hasn’t spoken one cross word about Trump or the White House’s handling of the outbreak, also warned that business owners could lose certificates and licenses to operate, and face insurance sanctions. Wolf already had vetoed legislation Republicans passed in April to limit his powers during the disaster emergency.

He has won legal challenges to his shutdown orders in both the state Supreme Court and the U.S. Supreme Court, let construction work restart and lifted the most severe restrictions in many areas. Still, two-thirds of the state’s 12.8 million people are expected to remain under stay-at-home orders past this week.

Video: Gov. Wolf to Pennsylvania - We must stay the course, we must follow the law

Cumberland County's per capita rate for the 14-day period sits at 52.89 cases per 100,000 people in the county, its lowest rate since the formula started in late April. 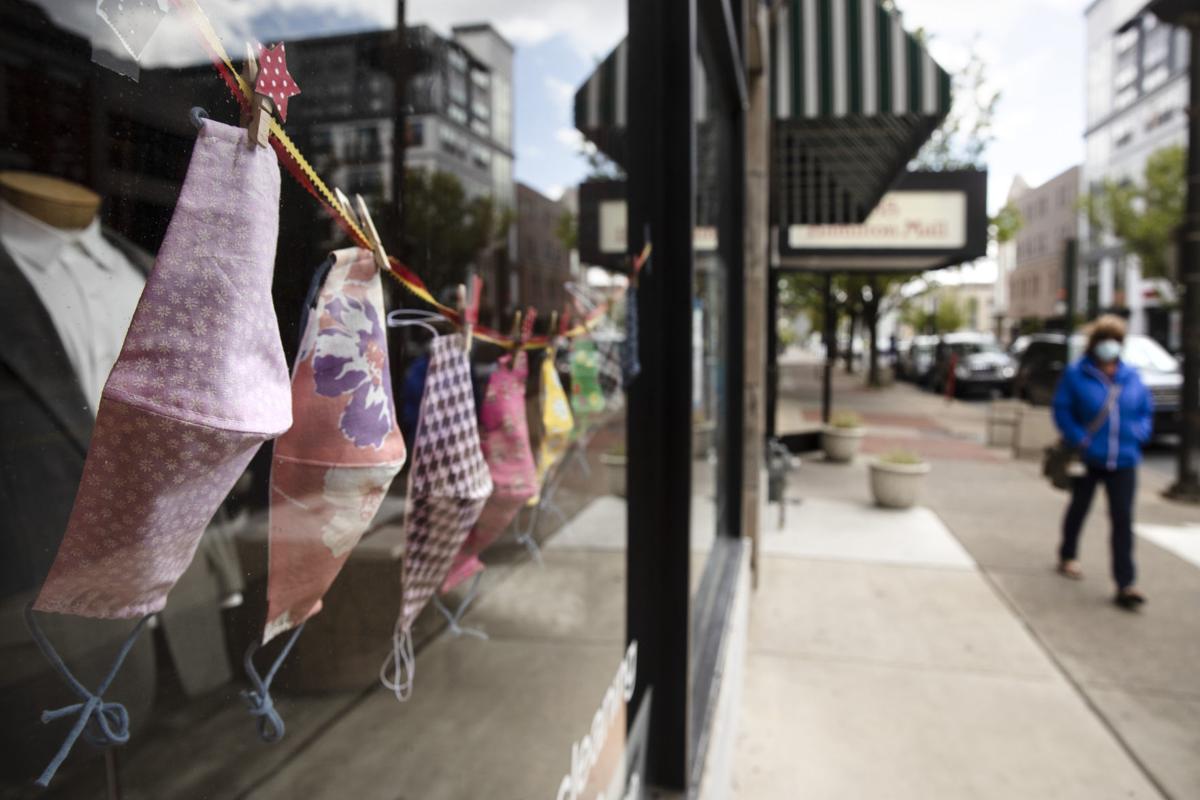 A person wearing a protective face mask walks by a shop displaying face coverings in Allentown. 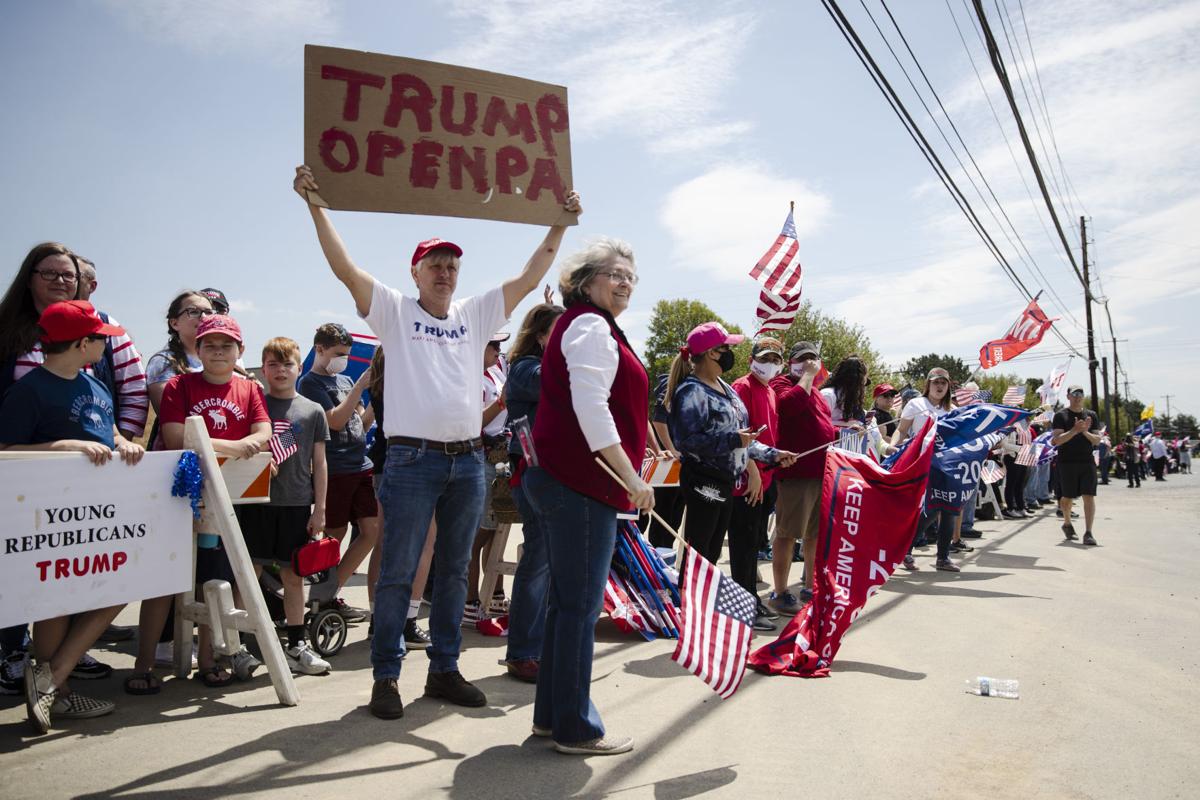 Supporters line the side of the road waiting for the motorcade of President Donald Trump to drive past on Thursday in Allentown.