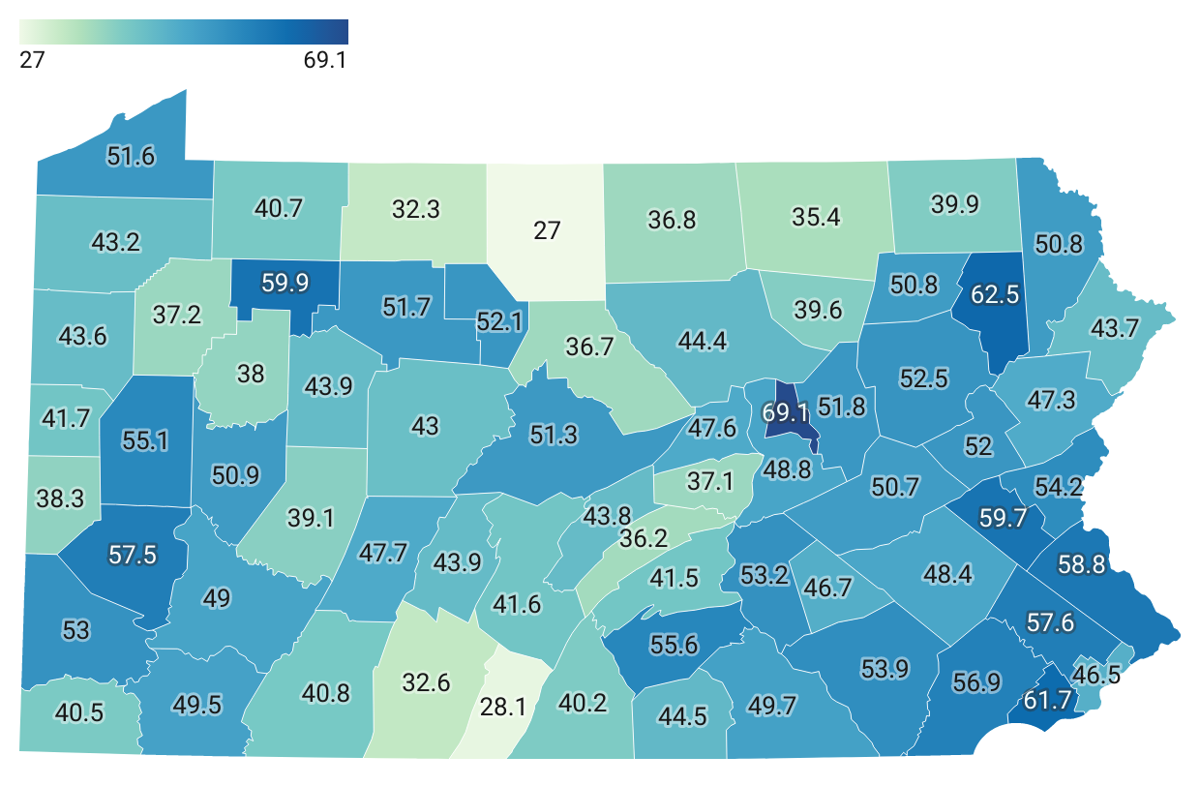 Map shows percentage of residents in each county over the age of 12 who have been fully vaccinated according to the Centers for Disease Control and Prevention. For an interactive version of the map, see cumberlink.com. 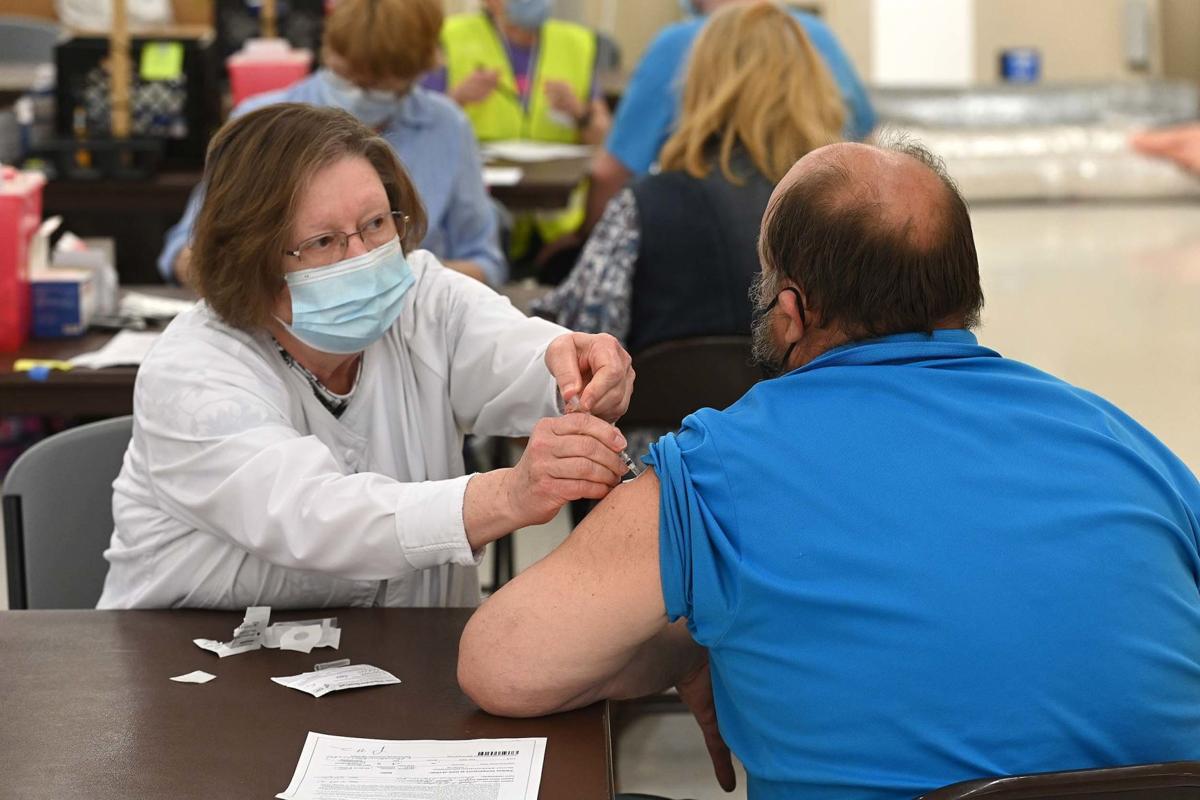 A steady stream of people received COVID-19 vaccinations at the Cumberland County vaccination site at the old K-Mart building on Walnut Bottom Road when it opened. That site has now closed as efforts now focus on persuading those who are more reluctant to get the vaccine. 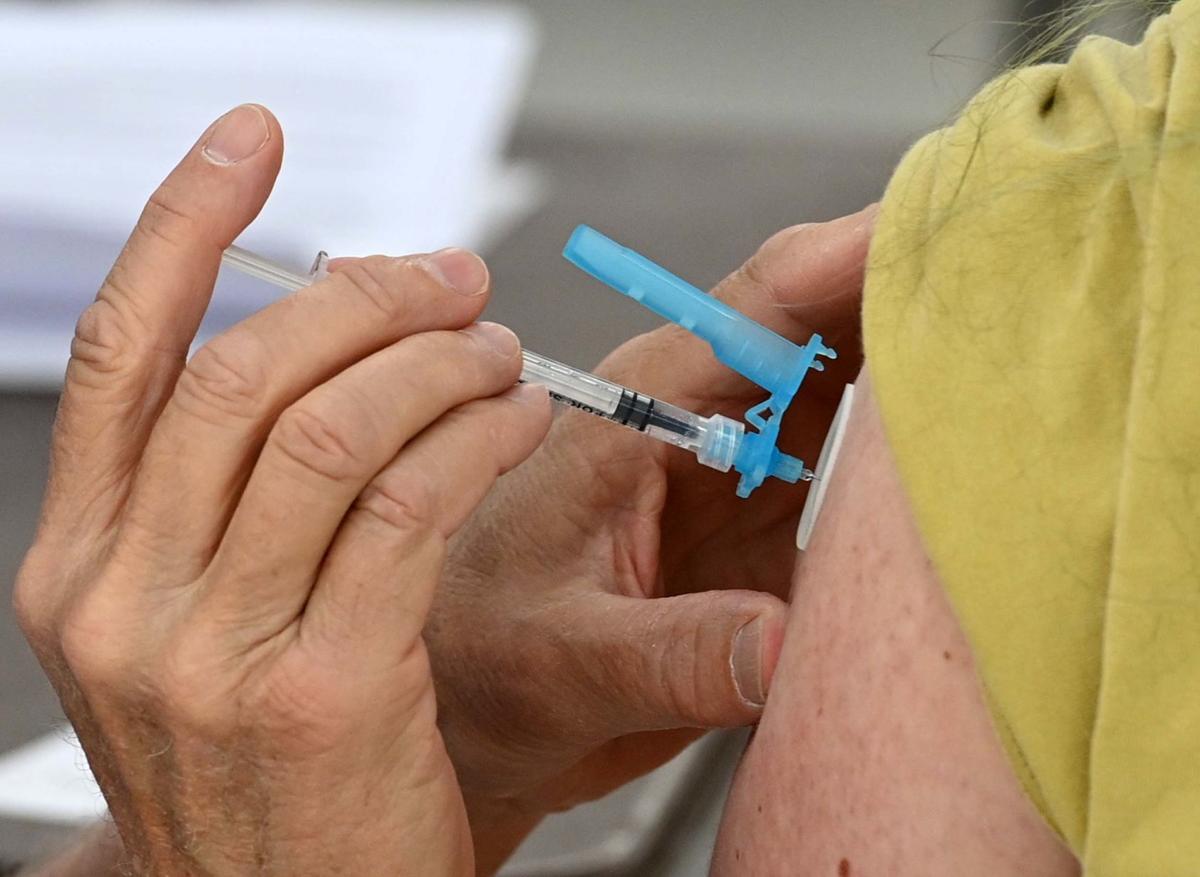 A COVID-19 vaccination is seen being administered at the now-closed Cumberland County clinic on Walnut Bottom Road. 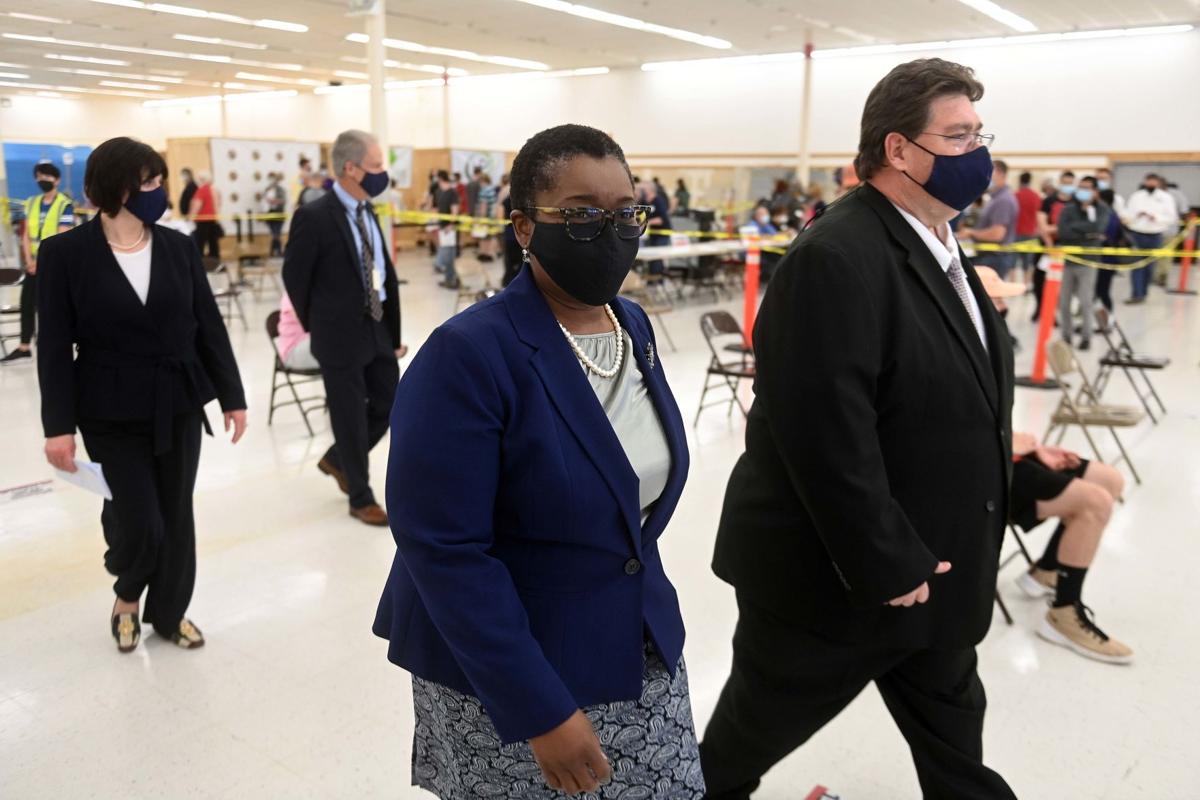 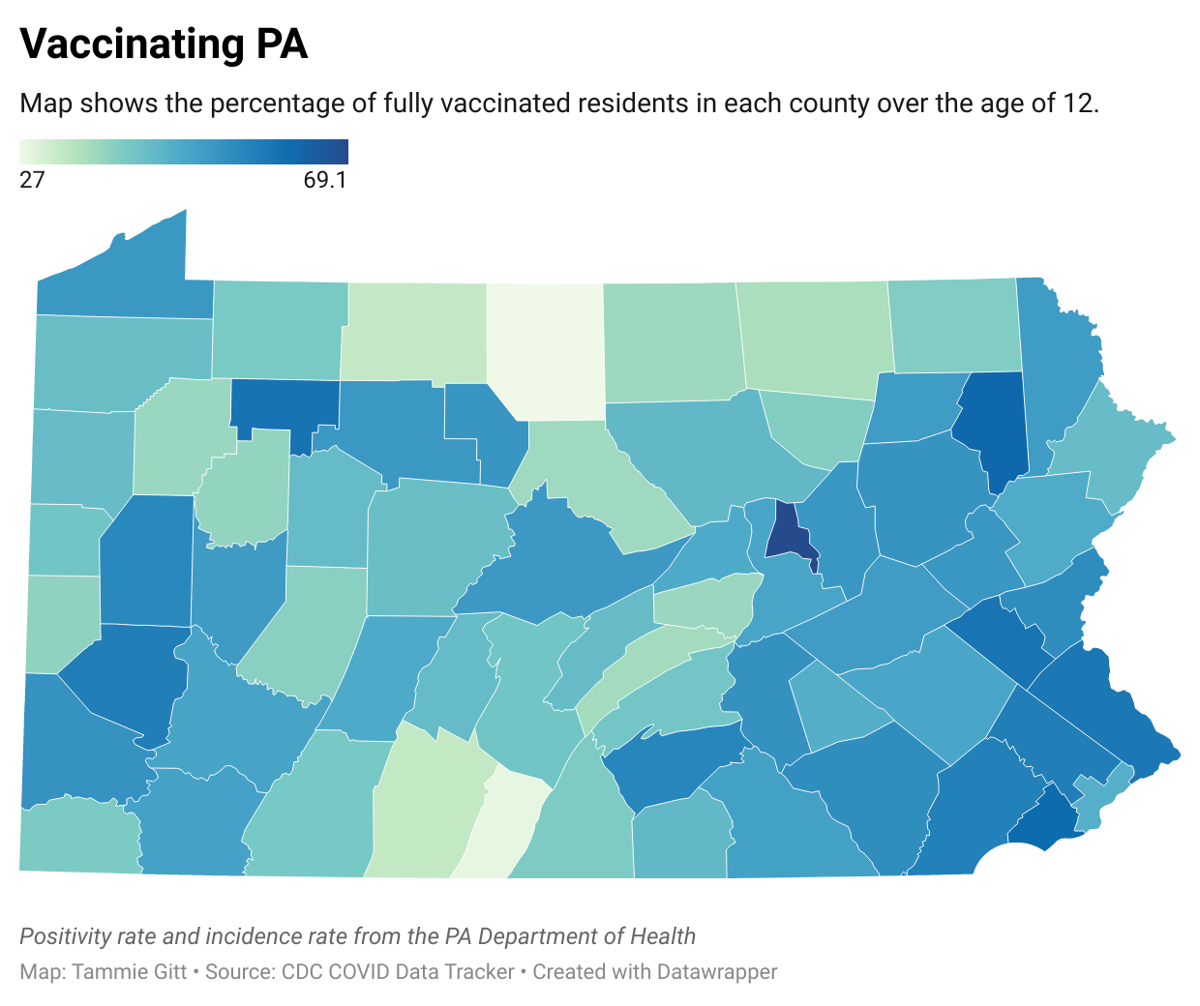 Pennsylvania is inching toward its vaccination goal with Cumberland County among the counties with the most residents vaccinated.

In data from the Centers for Disease Control and Prevention updated Thursday, 5,951,960 Pennsylvania residents over the age of 18, or 58.5% of the adult population, have been fully vaccinated.

Gov. Tom Wolf in early May said mask mandates would end when 70% of the adult population was vaccinated. On May 26, officials learned the state reached the benchmark of 70% of its adults receiving the first dose of the vaccines. The next day, acting Secretary of Health Alison Beam announced that the mask mandate would be dropped when the state reached 70% or June 28, whichever comes first.

Though the mandate is dependent upon the adult population, the Pfizer vaccine was approved for use in children between the ages of 12-18 on May 12, making anyone over the age of 12 eligible for the vaccine.

In data from the CDC updated Thursday, 55.6% of the Cumberland County’s eligible population are fully vaccinated, the 10th highest percentage in the state.

At the same time, the county ranks 59th in the list of 67 counties in terms of incidence rate, showing a rate of 22.1 cases per 100,000 people on the Department of Health’s Early Warning Monitoring Dashboard for the week ending June 17. A positivity rate of 1% gives the county the 14th lowest positivity rate, tied with Allegheny, Dauphin and Warren counties.

The mix of a high percentage of vaccinated people, a low positivity rate and a high incidence rate shows how complicated it can be to trace what factors are influencing the prevalence of the disease. Department of Health acting Physician General Dr. Denise Johnson said factors like masking for unvaccinated people, washing hands and attendance at large events also affect the spread of the disease.

“It’s not a simple one-to-one correlation, but the more people who are vaccinated, the less chance for the virus to circulate,” Johnson said.

For example, Johnson said COVID-19 became more common in younger people as the number of fully vaccinated people over the age of 65 increased. This shows that where there are a large number of unvaccinated people, there is more opportunity for the virus to circulate.

One Pennsylvania county is on the verge of seeing 70% of its eligible residents vaccinated. Montour County ranks as the sixth smallest county, but now has 69.1% of its residents fully vaccinated. It is tied with Forest, Indiana and Sullivan counties for the lowest incidence rate at zero cases per 100,000 people and is tied with Forest and Sullivan counties for the lowest positivity rate at 0% in the week ending June 17.

By contrast, Potter County, which is the fifth smallest county, has seen only 27% of its population vaccinated. Both the incidence rate and the positivity rate are among the highest in the state, as of the most recent data from the Department of Health. Potter County’s incidence rate is at 36.3 per 100,000 people, ranking it as 65th, and its positivity rate is at 10.9%, putting it at 66th place.

Urban areas are faring well in their vaccination efforts with five of the 10 largest counties also ranking among the top 10 counties based on the percentage of the population that are fully vaccinated. The best positioned county among them, Delaware County, is the fifth largest county, and has 61.7% of its eligible population vaccinated, the third highest in the state. At the same time, it has the 37th lowest incidence rate at 11.5 cases per 100,000 people and the 12th lowest positivity rate at .9%.

Johnson said it’s impossible pinpoint one factor influencing vaccination rates. Some people want to see more people vaccinated before they get the shot themselves. Others have issues getting to vaccination sites because of transportation or difficulty in getting off work.

Mass vaccination sites like the one held at the U-Haul building on Walnut Bottom Road in Cumberland County were effective initially as the Health Department focused on getting as many people as they could vaccinated as quickly as possible. At the time, the availability of vaccines was outpaced by demand as the sites catered to people who really wanted to get vaccinated.

“That was needed at that point in time, but the strategy and the need certainly have changed,” Johnson said.

Now, there’s more vaccine available and less demand so the Department of Health is looking at a two-pronged strategy to raise vaccination rates — education and accessibility.

Johnson said the department is working to answer people’s questions about the vaccine and addressing their specific concerns.

As people become more comfortable with the vaccines, the next step is to make the shots more accessible.

“We really want it to be very, very simple to get a vaccine, we want you to almost sort of fall into a vaccine without even trying,” Johnson said.

To do that, the department is working in smaller venues now, reaching out to independent pharmacies, retail pharmacies, doctor’s offices, schools, community centers and houses of worship to offer vaccinations.

“We’ve also had mobile clinics and we are going to be working on … some door-to-door vaccination. So we’re really doing all these different methods to make sure that we get vaccines as close to people as possible so that they have the convenience to be able to get vaccinated,” Johnson said.

Johnson also reiterated that the vaccines are free for everyone whether or not they have insurance. There are no copays for people who have insurance.

Concerns about pools of unvaccinated people are amplified by the variants that many experts believe spread easier and hold potential to become the predominant variant over time, Johnson said. The alpha variant that was first described in the United Kingdom now accounts for 66% of the cases in Pennsylvania. The delta variant that has been the cause of concern since it arose in India is responsible for 0.5% of the cases in the state.

“[We] really just want to encourage people to get vaccinated. These are safe and effective. They really are making a difference, but we still have a long ways to go,” Johnson said.

Sadler Health Center has partnered with the Partnership for Better Health to offer a $5 downtown Carlisle gift certificate to everyone who is vaccinated at their no-wait, outdoor vaccine clinic.

Carlisle kicks off COVID vaccination event to run through Sunday

Map shows percentage of residents in each county over the age of 12 who have been fully vaccinated according to the Centers for Disease Control and Prevention. For an interactive version of the map, see cumberlink.com.

A steady stream of people received COVID-19 vaccinations at the Cumberland County vaccination site at the old K-Mart building on Walnut Bottom Road when it opened. That site has now closed as efforts now focus on persuading those who are more reluctant to get the vaccine.

A COVID-19 vaccination is seen being administered at the now-closed Cumberland County clinic on Walnut Bottom Road.