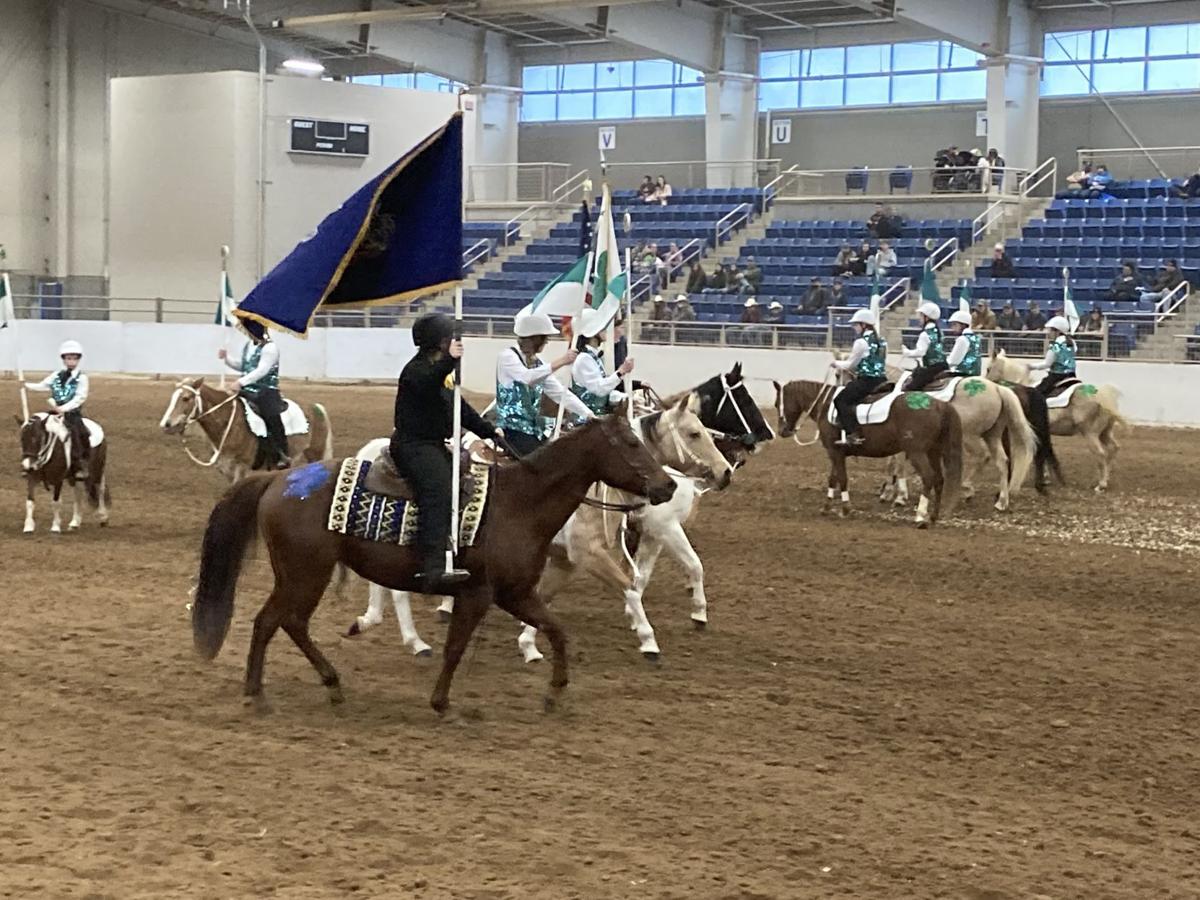 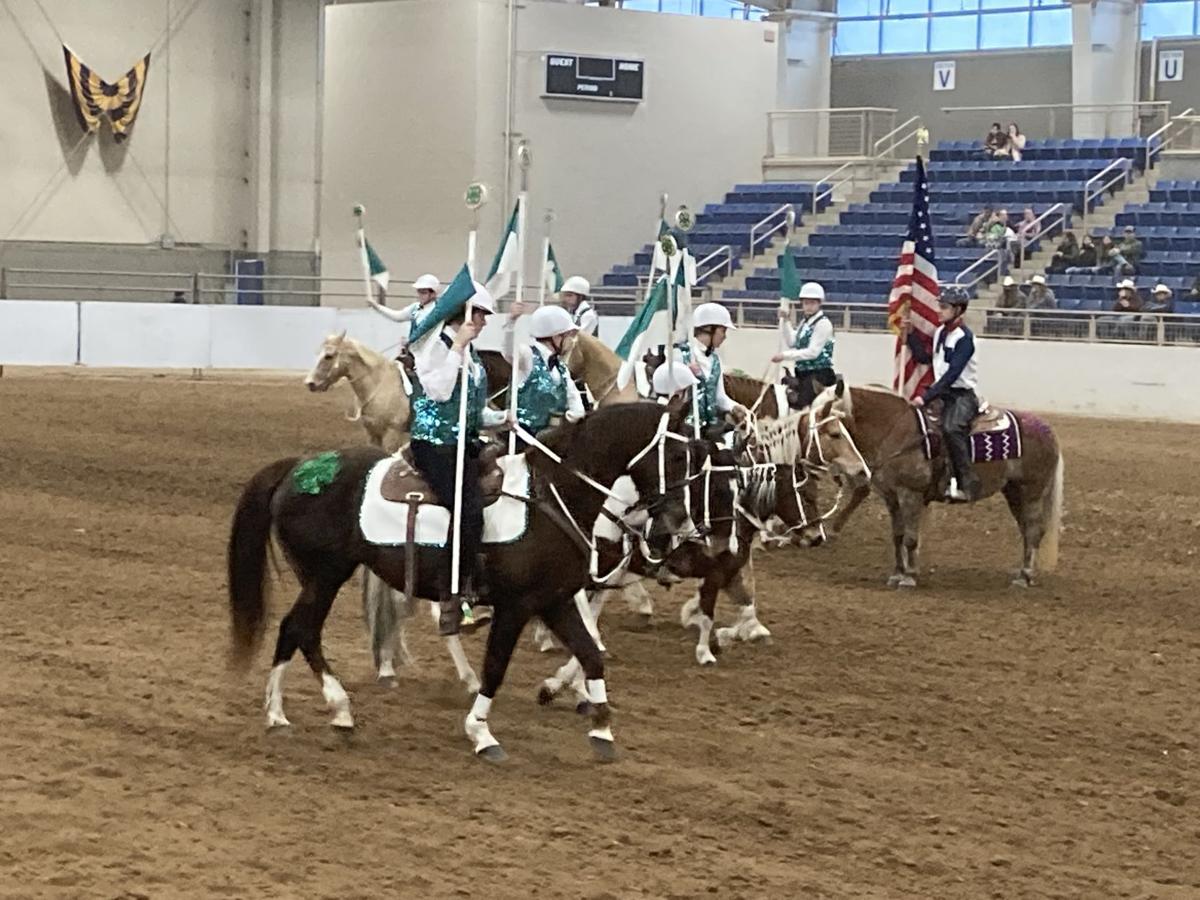 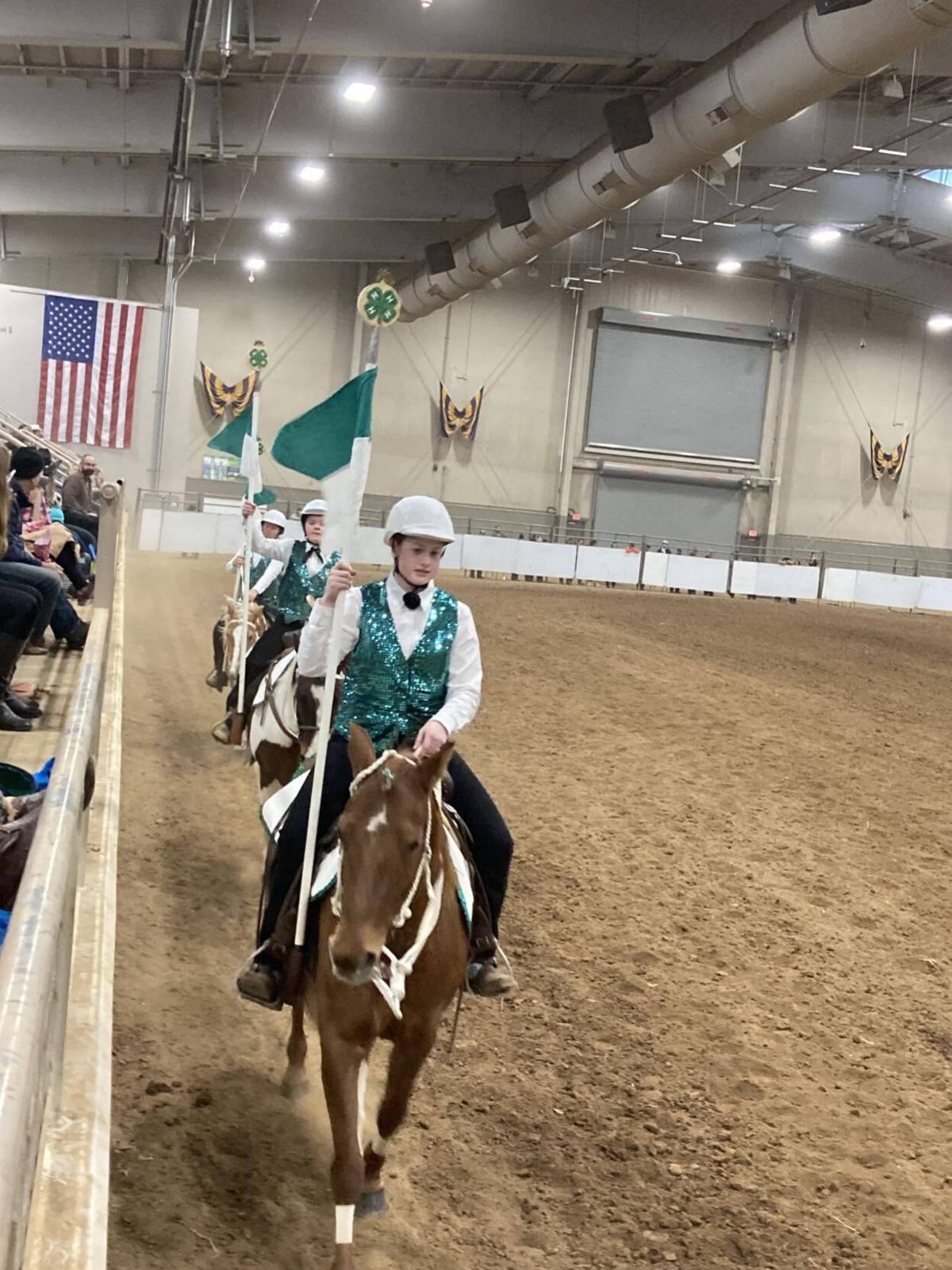 The team most years performs in the New Holland Arena but this year gave its show in the Equine arena.

HARRISBURG — Thirteen proved to be a lucky number for the Cumberland County 4-H Drill Team Friday at the 106th Pennsylvania Farm Show.

The team, which on Friday gave its 65th Pennsylvania Farm Show equestrian performance, usually has two dozen or more performers. This year’s team had 13 equestrians but their show in the Equine Arena on the seventh day of the eight-day show.

“COVID has kiboshed the Cumberland County Horse and Pony Club for the last two years,” said Sandy Long, a member of the club since 1962 and its leader for decades. “The kids can’t ride their horses virtually.”

The team most years performs in the New Holland Arena but this year gave its show in the Equine arena. This year’s drill team featured riders ages 9 to 18 and horses ages 8 to 21.

The drill team show began when Jack Wickard of Newville rode into the arena carrying an American flag in one hand and holding onto his reins with the other. The rest of the mounted team, wearing white shirts, sparkling green vests, black pants and helmets, followed.

The drill, done to patriotic music, included the disciplined horses and equestrians performing a variety of maneuvers. The mounted youths crisscrossed the arena and got their horses in figure eight. They demonstrated a wagon-wheel formation in which they rode four abreast, forming what looked like a carousel of horses.

The performance ended with a recording of Lee Greenwood’s “God Bless the U.S.A,” during which the team lined up and the audience stood in silence and saluted the flag or held their hands over their hearts.

As the song ended, people cheered and the team then rode out of the arena.

“I get a little nervous being out there,” said Wyatt Long, 10, Sandy Long’s grandson. “But it’s fun too.”

Moriah Conley of Gardners rode Honey, her 16-year-old Haflinger. “I’ve been around horses since I was a baby,” she said. “My mom used to be on the team and now I am.”

Jameson Raudabaugh, 9, of North Middleton Township, said his mother used to be on the team too.

“I ride Riley, my 8-year-old American Paint,” the Crestview Elementary School fourth grade student said. “The team is fun but it takes concentration and hard work, especially during the crossovers.”

His mother, Trisha Raudabaugh, was on the team 10 years and now is one of its leaders. “Horses teach children responsibility,” she said, “They also teach them how to cooperate and work well with others.”

Cumberland County teens take to the arena for drill team

Chances are the demolition project will impact the movement of traffic on Forge Road. Both the sewer and water mains have to be capped 10 feet underground.

Pennsylvania Gaming Control Board awards license for casino in Shippensburg

Parx Casino in Shippensburg will offer 500 slot machines, electronic table games and a restaurant and sports bar when it opens its 73,000-square-foot facility in late 2022.

The NWS forecast now calls for 3-5 inches of snow Sunday with rain and freezing rain later in the evening.

Here are the school closings and delays for Tuesday, Jan. 18.

Moving the photo collection from the Bradley home to North Pitt Street required the society to convert a section of its basement into a room to house drawers of negatives and boxes of slides and print images.

DOH: About 600 new COVID-19 cases reported each day over weekend in Cumberland County

The department said Cumberland County had 1,206 new COVID-19 cases since Friday, and 987 of those were confirmed cases.

Vendors in the Food Court sold everything from apple dumplings to fried zucchini. The majority reported their business down by 50 percent.

Enthusiasts show off skills with tractor restoration at Farm Show

HARRISBURG – You never know what you’ll see when you walk through a junkyard.

The team most years performs in the New Holland Arena but this year gave its show in the Equine arena.