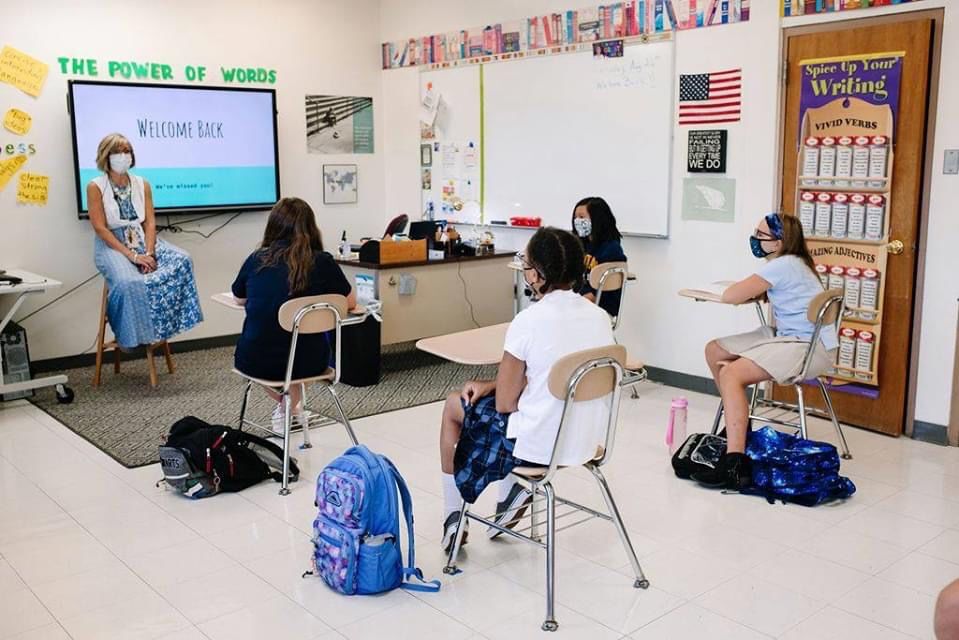 Students at Harrisburg Academy had the option to take classes online or in person. About 15% of the student body chose to take online classes. 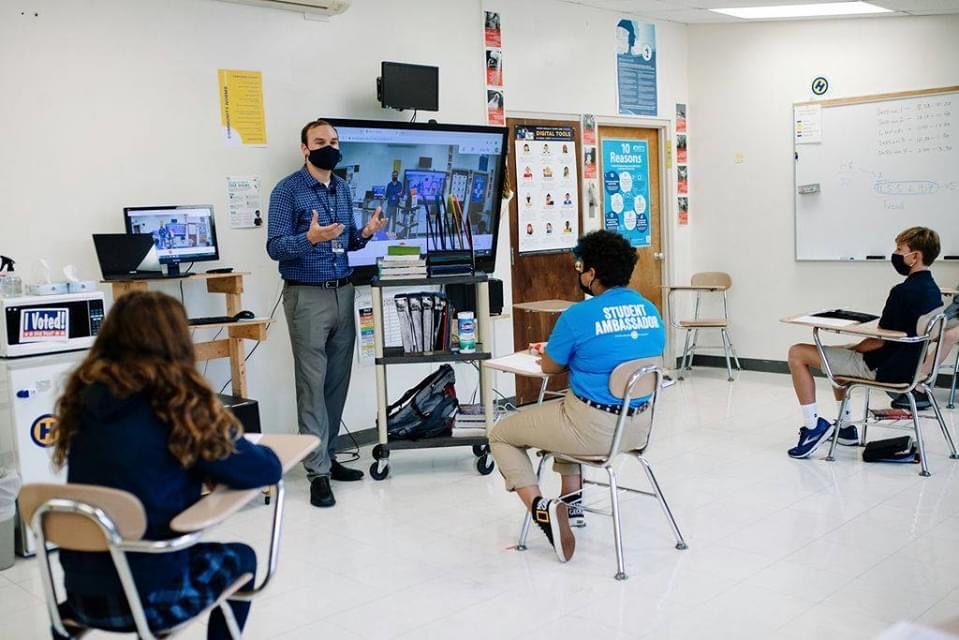 Students at Harrisburg Academy have been in class for about two weeks. 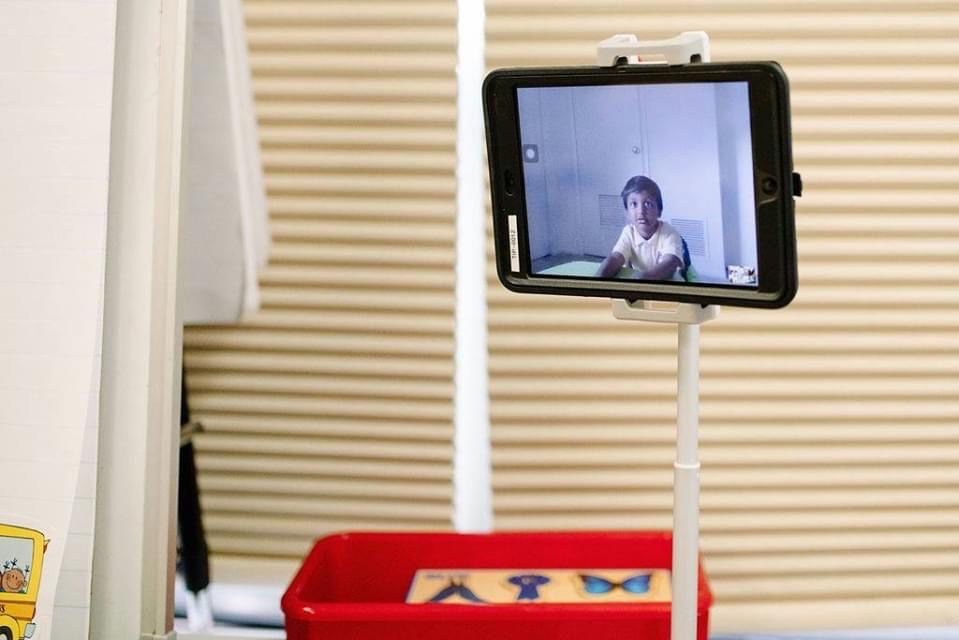 Harrisburg Academy has taken steps to make sure the students at home are part of the class with strategically placed screens, cameras and microphones. 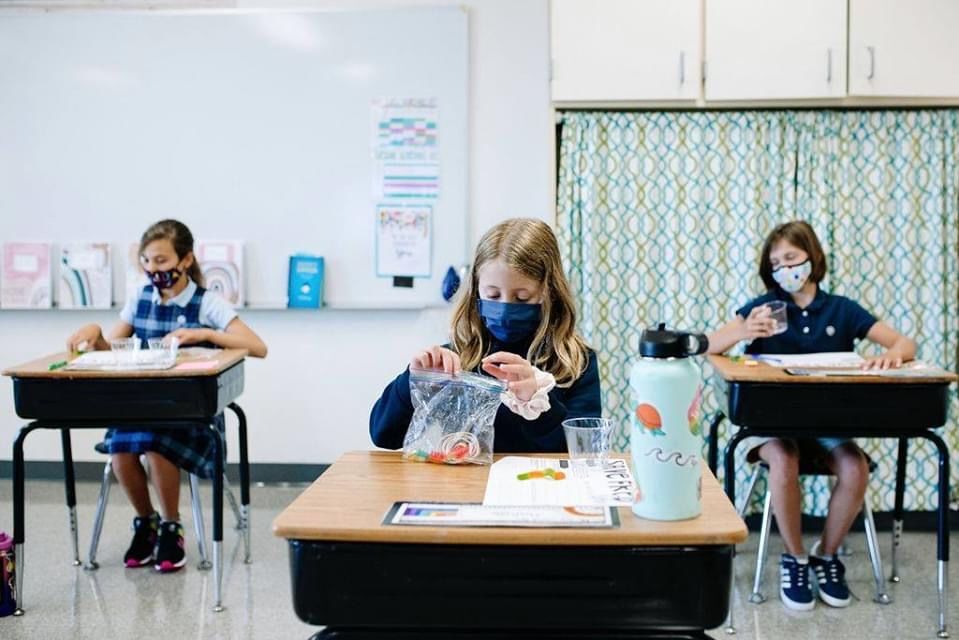 Students at Harrisburg Academy stay in their classroom while teachers change in an effort to keep hallways clear.

When most area schools return to the classroom in some form on Tuesday, Harrisburg Academy will be marking the completion of nearly two weeks of largely in-person instruction at its East Pennsboro Township building.

For Adrian Allan, the head of school at Harrisburg Academy, such models weren’t on the drawing board. Rather, the school is holding in-person classes while offering families the option of attending school fully online.

“There’s more to going to school than doing your math and English and so on,” he said. “We were very keen, if possible, to do in-person instruction. On the other hand, we recognize that different people have different needs.”

Of the school’s approximately 280 students, about 15% chose the online option, and those were primarily students in the upper grades.

The school has taken steps to make sure the students at home are part of the class with strategically placed screens, cameras and microphones along with whiteboards connected to the Google Hangouts system they’ve been using.

On the first day, there were a few technical hiccups, but they were quickly solved.

“By the second period, we had everybody pretty much online, streaming and being part of their class,” Allan said.

Allan suspects online learning will continue to happen until there’s a vaccine. Eventually, the option will no longer be offered in the younger classes, but it could continue in the upper classes as a means for Harrisburg Academy to broaden its reach, particularly for its International Baccalaureate program. It’s the only school within 100 miles to offer the program.

Allan said the school also knew from the start it would be strict on protocols to keep COVID-19 at bay. Masks are to be worn at all times. Students were placed into smaller groups. Teachers are moving between classes rather than having students fill the hallways for class changes. Filters in the school’s HVAC system were changed to hospital grade, and sanitizing is happening on a regular basis with a machine that Allan said looks like something out of “Ghostbusters.”

“It’s a lot of steps to make sure that we’re creating a very safe environment,” he said.

Upon arrival at school each morning, students can’t enter the building until one of the staff members takes their temperature and checks them for symptoms. Only then can they enter, alone. No parents or outside visitors are allowed in the school.

“The first day of school actually went surprisingly well. There were lots of moving parts that we had to put in place,” Allan said.

If the process sounds like the protocols that were reported out of schools in South Korea and other nations, that’s not by accident.

Allan’s background is in international schools and Harrisburg Academy has connections through its International Baccalaureate program. Allan said he checked in with schools in Asia, Hawaii and Norway to find out what worked for them.

“You collect it all and make your own blend of it,” he said.

Should a student be diagnosed with COVID-19, Allan said parents will be notified.

“There will be no secrets about that,” he said.

Contact tracing for an affected student will be fairly easy as students are being kept in pods that limit interaction across the building. An infected teacher would pose more of an issue for contact tracing since the school will have to find out who had close contact with the teacher for more than 15 minutes.

Allan said it’s important to remember that the government steps in when a child has COVID-19 and the school won’t be making all of the decisions on its own.

That’s a future officials in any school hope they won’t have to face. For now, they’re happy to see their students back in buildings that have been quiet for nearly six months.

“A school just isn’t a school until there are kids in it. It’s just a building. It’s an empty thing,” Allan said. “To have the kids back is absolutely awesome.”

Nearly 700 district students have already signed up this year for CAOLA cyber instruction offered through the school district and the Capital Area Intermediate Unit.

Students at Harrisburg Academy had the option to take classes online or in person. About 15% of the student body chose to take online classes.

Students at Harrisburg Academy have been in class for about two weeks.

Harrisburg Academy has taken steps to make sure the students at home are part of the class with strategically placed screens, cameras and microphones.

Students at Harrisburg Academy stay in their classroom while teachers change in an effort to keep hallways clear.