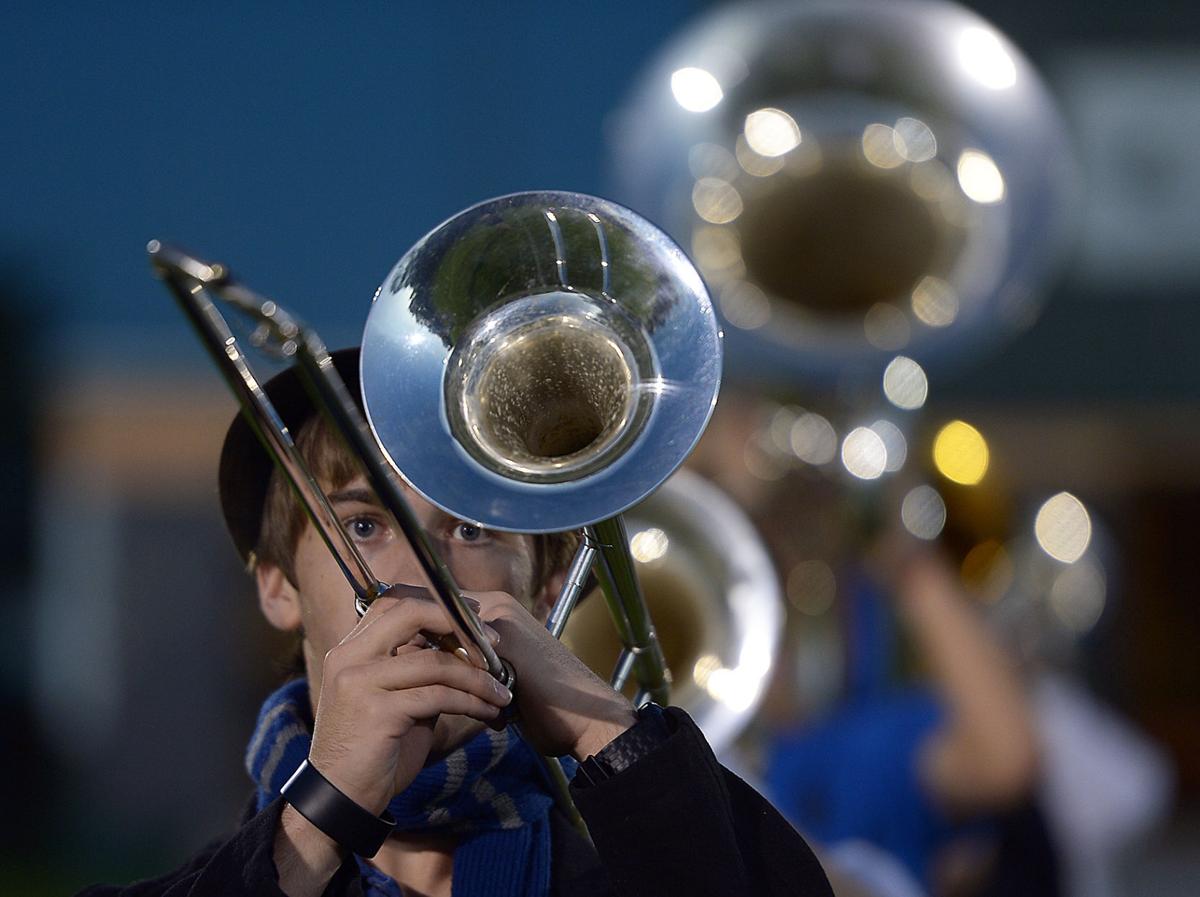 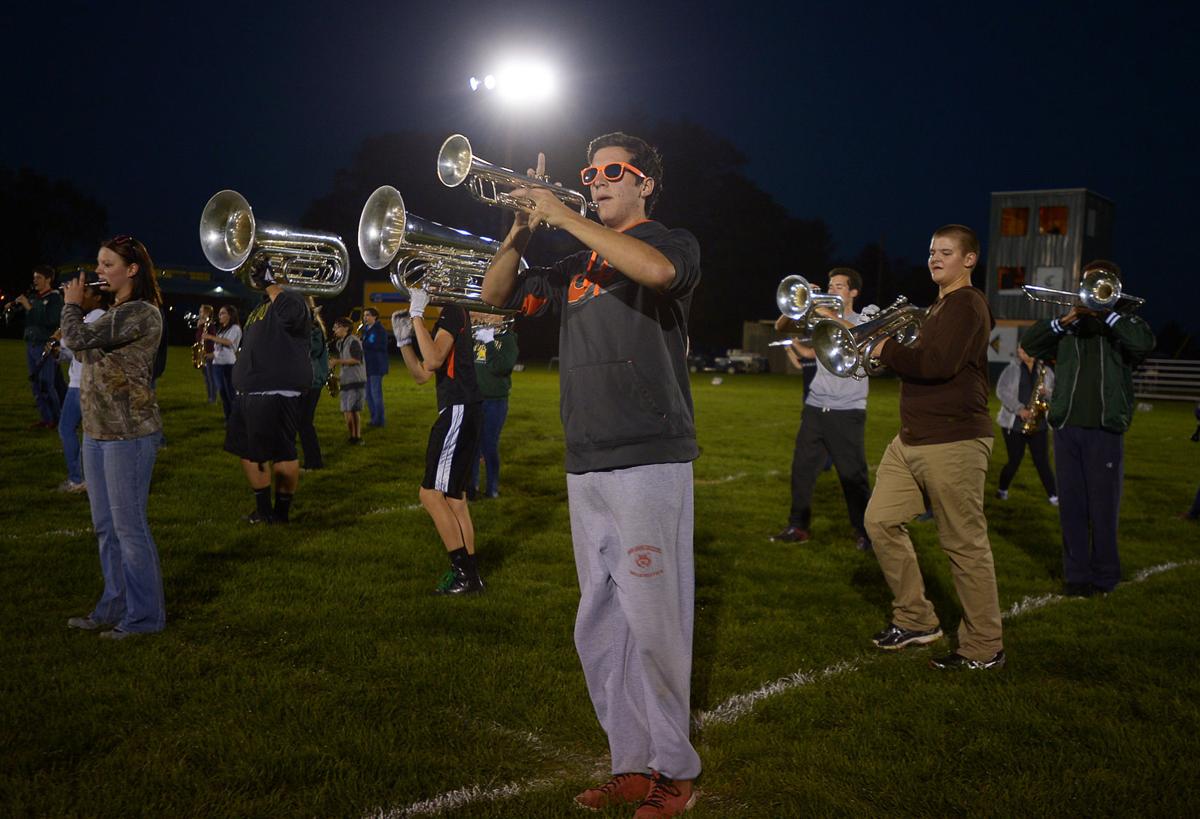 Carlisle High School marching band member Will Hammer holds the trumpet as the bands walks through their steps during practice on Thursday night. 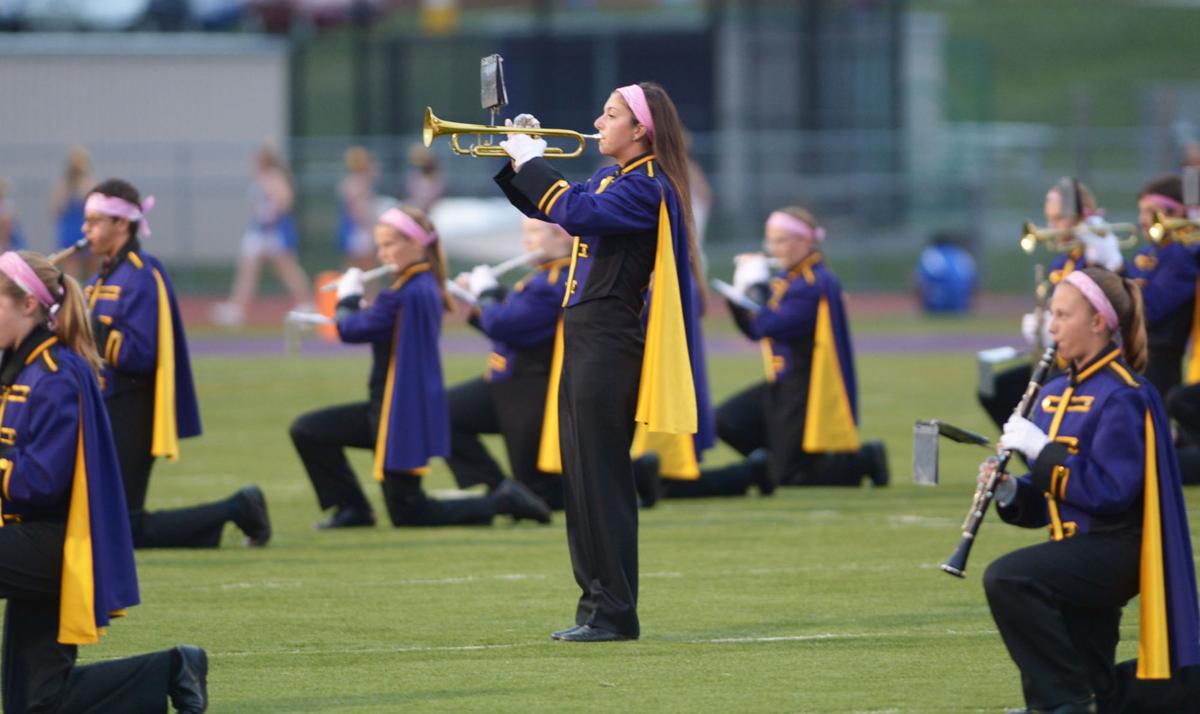 Stadium lights begin to illuminate. Introductory announcements ring from the press box, igniting applause. And on the football field, a group of uniformed, instrument-wielding young men and women stand stone-faced in a starting formation they have practiced for months.

As applause peter out in anticipation, the voice of the announcer once again fills the stadium: “Drum major, is your band ready?”

The drum major, spearheading the formation, faces the press box in a quick salute before bringing the band to attention. And then, after one more introduction from the announcer, it begins.

Anyone who has attended a high school marching band competition has likely experienced the preceding scenario to some effect — and also knows that the start of a single performance is just one part of a laundry list of competition etiquette expectations for both band members and spectators.

“Every drum major has their own twist on the salute,” said Carlisle High School Drum Major Sarah Ebert. “It is competition etiquette that really just goes back to tradition.”

This tradition reveals itself throughout the course of a competition — mostly on the audience side of the spectrum. During performances, audience members are expected to remain seated and focused on the performance. Bleachers are typically roped off or otherwise blocked by staff until a performance concludes; this is done to prevent distraction from new spectators searching for seats.

Audience applause also follows specific etiquette. Generally, applause can be heard at the start of each section of a band’s performance.

“Every show usually has three distinct parts: an opener, some kind of ballad or slower piece to change the pace and then a closer that is usually a little faster paced and builds excitement,” said Carlisle Assistant Band Director Dominick Raimato. “So usually there is applause for transitions between the three sections. Usually if (the audience) is surprised or impressed by something, it is appropriate to applaud.”

According to Cumberland Valley Band Director David Porter, this approach creates an atmosphere that helps to facilitate peak performance from bands.

“(Competitions) give (band members) an avenue to perform to the best of their ability and to a crowd of fans,” Porter said. “With band competitions, the audience knows when to clap and not to talk during performances. It is a nice thing for them to have that different atmosphere.”

“At other events like football games, you do have a lot of people who listen and cheer, but there is also a lot of other things going on at the same time,” Raimato said. “Competitions are the only time where everyone is quiet and actually listens to the band perform the whole time.”

Though the chance to perform in a focused setting is important, competitions also stand as a key chance for band members to interact with and observe other schools’ bands. Many directors view competitions as a community-based affair.

“Competitions are great (for the band members) to see other groups perform and to meet other students,” Raimato said. “Once they are finished performing, they can go talk to some different people and some of them make friends with the other bands. You will have some who went to camps with members of other bands and they get to have those conversations and interact with them outside of where they knew them from.”

During the actual performances, band stage presence is sometimes heightened through the use of exhilarating themes, props, chants and even dance moves — factors employed to catch the attention of both judges and audience members.

“Sometimes (the applause) could be for something really cool or surprising that the band does in the show that (the audience) never knows is coming,” Raimato said. “If soloists perform during the show, they usually receive applause for the work they have done.”

But despite the passion and creative intensity of some performances, Porter said that most competitions are held as a showcase of young talent, rather than a fierce competition to garner the highest score and biggest audience reaction.

“The majority of band directors do not view competitions as must-win events,” Porter said. “The main point is to provide students with a way to give their best performance possible to a crowd of appreciative people. We try to make it a very focused event, but we want the kids to enjoy themselves and do well. We try to make it as stress free as possible.”

This week The Sentinel takes a Closer Look at the competitive world of high school marching bands in the Midstate:

For many high school communities, the fall season is best evoked through the atmosphere of a Friday night football game.

Closer Look: Marching band programs depend on many sources for financial stability

There is a reason why many regarded musicians create or donate to music education charities. Lately, high school music programs have been a fo…

Carlisle High School marching band member Will Hammer holds the trumpet as the bands walks through their steps during practice on Thursday night.