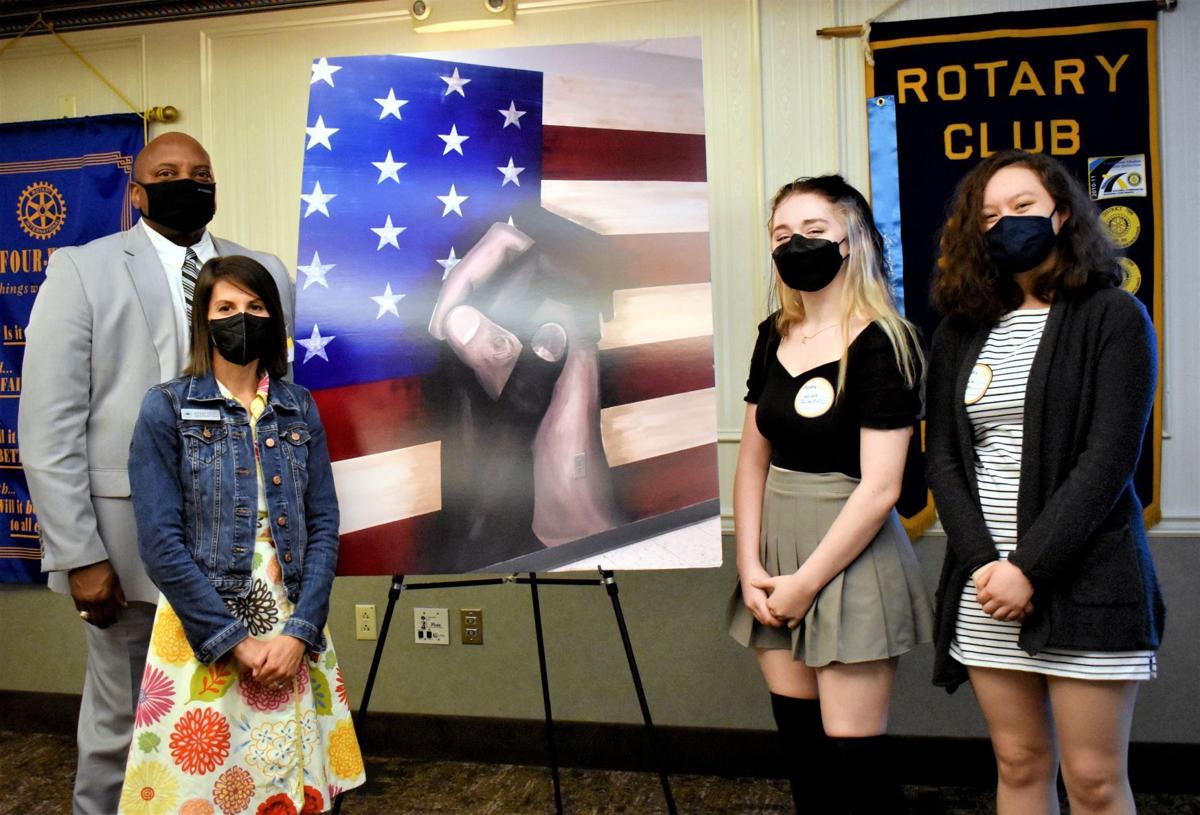 The Rotary Club of Carlisle hosted speakers who were instrumental in the project to paint the Unity Mural in the Carlisle Borough Police Station. Pictured, from left to right, are Police Chief Taro Landis, art teacher Ashley Gogoj and Carlisle High School seniors Leah Bowman and Dervla Dolan. 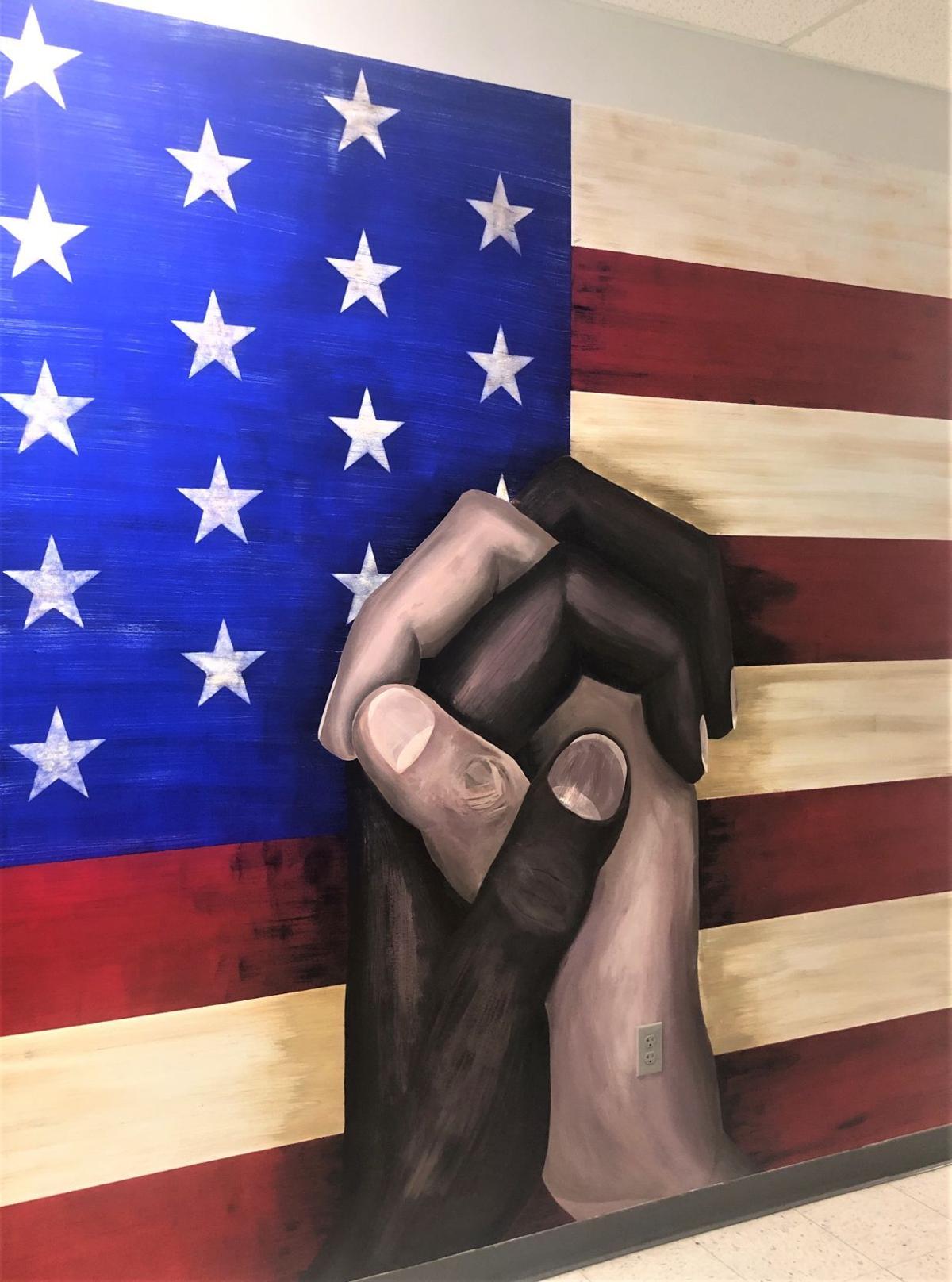 The Unity Mural is displayed on a hallway wall at the Carlisle Police Department Station. 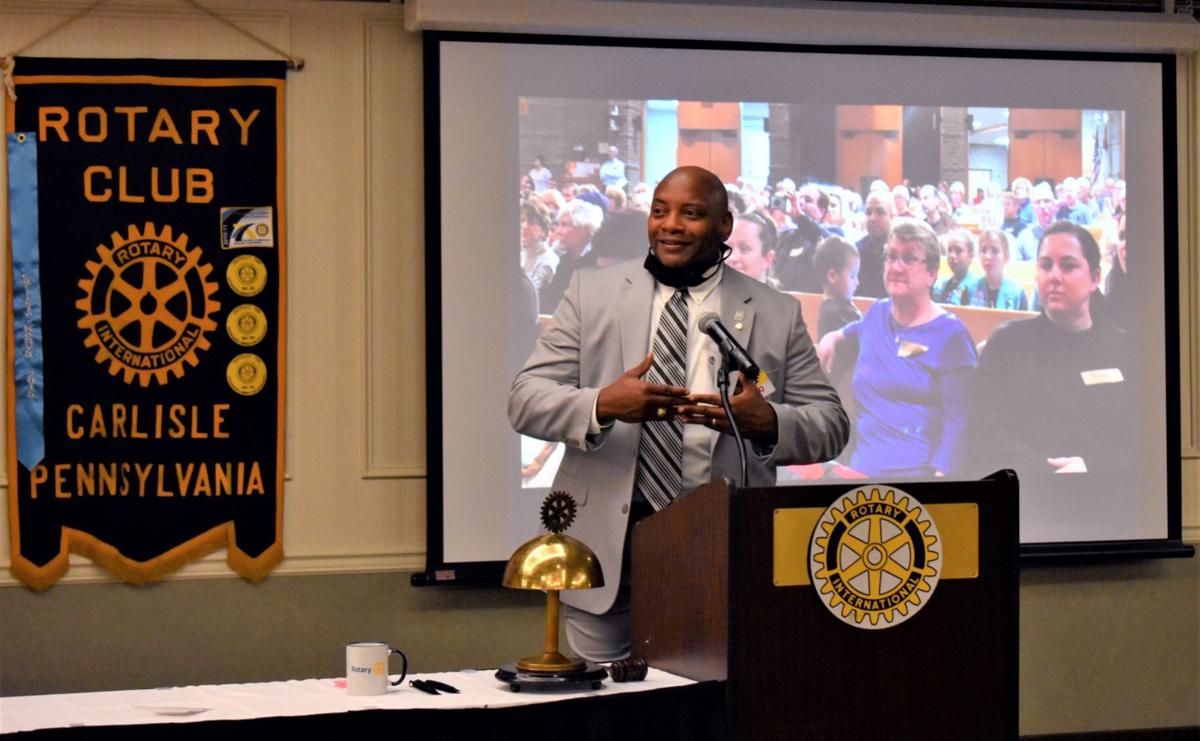 Carlisle Police Chief Taro Landis comments on the Unity Mural during a presentation Thursday at the Rotary Club of Carlisle meeting.

The fine art of compromise is essential to the bigger picture.

Two teams of Carlisle High School students learned that lesson firsthand over the five days it took them last spring to paint the Unity Mural inside the borough police station.

Working in shifts, the five individuals drew from each other a common theme brought to life in a blend of colors meant to bridge divides.

“We realized we all had different perspectives on how this piece will go,” recalled Leah Bowman, now a senior. “But then we sat down as a group and decided ‘what’s the main goal here?’ and that’s to get the message across of unity. We unified the most important piece of each of our aspects. We combined all those.”

“You can see where each person worked,” classmate Dervla Dolan added. “Each unique art style shows through in certain areas.”

Bowman is in the details of a Black hand clutching a white hand in front of an American flag. Dolan can be seen in the subtle highlights of shading where the two hands come together.

Both students were guests Thursday of the Rotary Club of Carlisle where they explained the story behind the Unity Mural. Planning for it began in fall 2020 when Ashley Gogoj, art teacher at the high school, received a request from the police department.

Logistics were a problem at first due to COVID-19. Students were in a hybrid learning cycle of two days in the classroom, three days at home. But Gogoj used the time to talk to members of the National Art Honor Society who put together Teams A and B. At that time, Bowman and Dolan were juniors while Catherine Davis, Danielle Fevola and Madison Tack were seniors with the Class of 2021.

By the spring, a window had opened in the schedule where the teams took turns visiting the Carlisle police station. The work began with the three seniors taping off a six-foot square on one of the interior walls.

From there, the upperclassmen went old-school when they used an overhead projector and a transparency to trace the design of the two hands on the wall. They then blocked out the elements of the flag as they applied the base coat.

Bowman and Dolan were on a team that added details as the mural progressed. They used a dry brush technique to add texture and age to Old Glory. The finished product impressed Police Chief Taro Landis who drew a comparison Thursday between the strife of current headlines and the struggles of past generations.

“What’s going on right now has shaken our country to the core,” the veteran Marine told the Rotarians. “Critical race theory ... masks or no masks ... if you look at the American flag, it is worn. It has been through something. We are worn. We have been through stuff. We have been through this before. The flag epitomizes strength ... that bond we have as Americans. We can bring that back together ... Not look at our differences, but look at our similarities.”

Throughout the process, the five students took up the challenge of trying to coordinate the painting of one mural between two teams coming and going. Each shift was confronted with a slightly different interpretation of the same objective.

“Like our country, we needed to compromise,” Bowman said. “We knew what the end result was going to look like. We just didn’t know the steps. Sometimes, it didn’t work exactly as one group wanted. We just made a few adjustments to it. We came back around and worked as a group.”

The Unity Mural is based on an illustration by Jeremy Tritle that appeared on yard signs that showed up in the Carlisle area about a year ago. The illustration shows a Black and white hand with fingers intertwined beside the message “We Need Each Other to Survive.”

The yard signs were an outgrowth of a community service where people from different faiths and backgrounds gathered together in harmony at the Second Presbyterian Church in Carlisle, Pastor Jeff Gibelius said Thursday. “We needed to do something in response to the growing tension between police and concerned citizens.”

During that service, a fellow pastor began to sing a song with the refrain “We need each other to survive.” That spontaneous moment inspired others to join right in. Soon, the whole audience was making music together.

“A group of strangers ended up singing that very song to each other in the pews,” said Gibelius, co-founder of what became Carlisle Bridge Builders.

“Trust and transparency translate back to communication systems,” Estep said. “When your communication system is inadequate, that leaves too much room for people to make assumptions because they don’t have the information they need to determine what is what."

Drapp steps down as Cumberland Valley School Board president

Drapp, who represents Silver Spring Township on the board, is at the end of a four-year term that expires next month. He was re-elected for another four-year term as a CV school director on Nov. 2.

“My message to board members is let the science and information coming from public health leaders inform the decisions we make,” Pennsylvania Secretary of Education Noe Ortega said Tuesday.

The high court said its decision was not the last word and may be reconsidered after it hears oral argument in the case next week.

A student walks into the school office blurry-eyed from a lack of sleep. He was up all night worried about his parents. His dad took off follo…

The departures of Liz Knouse and Elizabeth Meikrantz comes as the board transitions in four new members who were elected to the board earlier this month.

CV school board will return to in-person meetings

Despite the anticipated format change, the district will continue to livestream regular school board meetings online, as well as accept public comment electronically.

Wingsuit daredevil flies in and out of active volcano

Wingsuit daredevil flies in and out of active volcano

The Rotary Club of Carlisle hosted speakers who were instrumental in the project to paint the Unity Mural in the Carlisle Borough Police Station. Pictured, from left to right, are Police Chief Taro Landis, art teacher Ashley Gogoj and Carlisle High School seniors Leah Bowman and Dervla Dolan.

The Unity Mural is displayed on a hallway wall at the Carlisle Police Department Station.

Carlisle Police Chief Taro Landis comments on the Unity Mural during a presentation Thursday at the Rotary Club of Carlisle meeting.