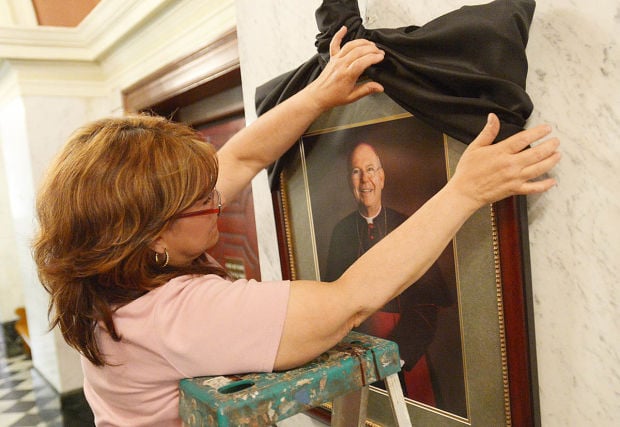 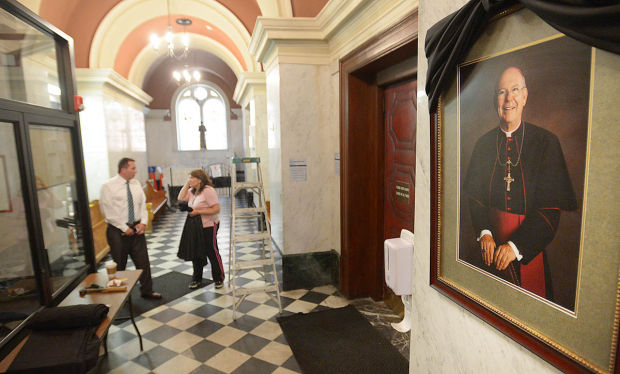 A memorial for Bishop Joseph McFadden, who died suddenly Thursday at Cathedral Parish of St. Patrick in Harrisburg. 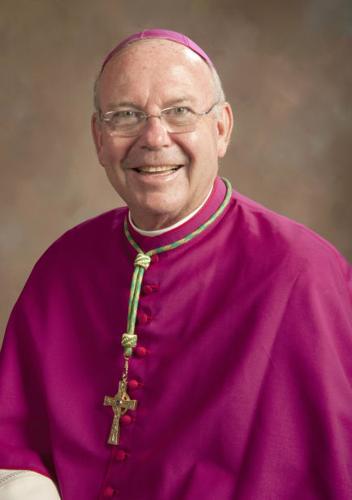 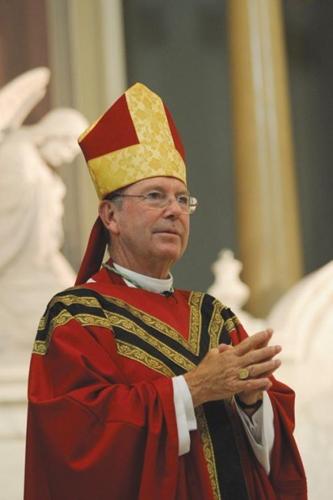 Bishop Joseph P. McFadden celebrates his first Mass as bishop of the Diocese of Harrisburg Tuesday at Saint Patrick’s Cathedral in Harrisburg. 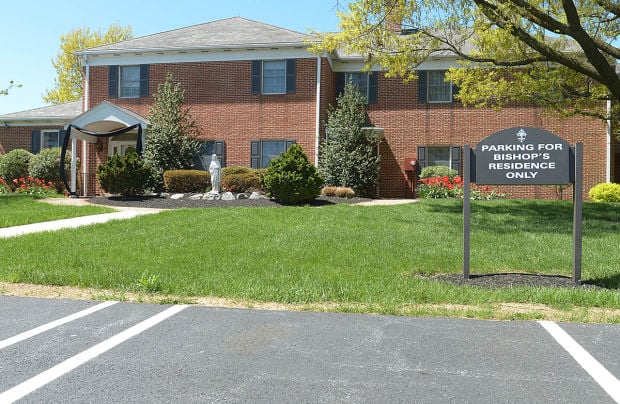 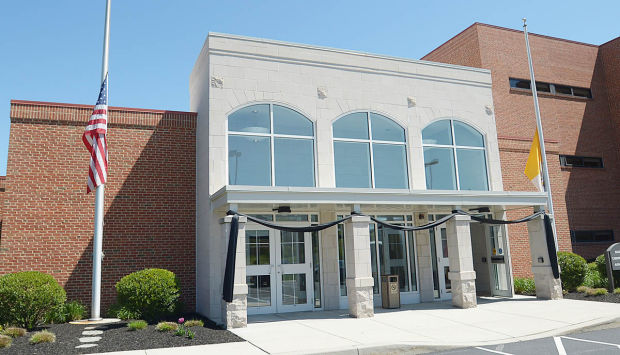 Flags are at half-staff at the Cardinal Keeler Center Administrative offices in Harrisburg due to the sudden passing of Bishop Joseph McFadden. 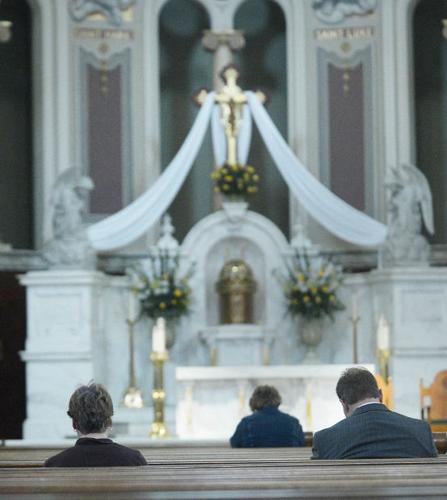 By Andrew Carr, The Sentinel

HARRISBURG — Bishop Joseph P. McFadden will be remembered as a man who led the Roman Catholic Diocese of Harrisburg with warmth and love, local clergy recounted Thursday.

“The Catholic community was devastated by the news of the passing of our bishop,” said the Rev. William C. Forrey, pastor of St. Patrick’s Church in Carlisle. “He was a warm and loving priest, bishop and shepherd. He was a shepherd who loved parish life and was enthusiastic about encouraging parishes to be more effective, deepening their relationship with Jesus Christ.”

McFadden died unexpectedly Thursday while attending a meeting of the Catholic Bishops of Pennsylvania in Philadelphia.

“We are in mourning,” diocese spokesman Joe Aponick said during a news conference announcing McFadden’s death.

An exact cause of death has yet to be determined. McFadden was staying at a rectory while attending the meeting in Philadelphia, awoke Thursday feeling ill, and was taken to a hospital where he was pronounced dead at approximately 7:40 a.m.

“I knew him in the seminary and served as his vicar general in the diocese for the first three years he was bishop and worked very closely with him because of that,” said the Rev. Msgr.

William J. King, pastor of St. Elizabeth Ann Seton Church in Mechanicsburg. “He brought the heart of a servant in the work he did as bishop.”

McFadden was born in Philadelphia on May 22, 1947, the son of Thomas and Ellen (Griffin) McFadden. He was baptized at St. Rose of Lima Parish and attended Our Lady of Lourdes Elementary School from 1953 to 1961.

He attended St. Thomas More High School for Boys from 1961 to 1965, and was a member of the student council, the newspaper, the junior varsity and varsity basketball teams, and a member of the National Honor Society. He was also the class valedictorian.

Following high school, he went to St. Joseph University, where he majored in political science and graduated in 1969 with a bachelor’s degree in politics.

McFadden was hired to teach at West Catholic Boys High School and coached basketball while he was employed there. In 1972, he was appointed athletic director for West Catholic and served on the Board of Directors for the Philadelphia Catholic League.

In June 1981, he was assigned the parochial vicar at St. Laurence Parish, Highland Park. In 1982, he was appointed administrative secretary to Cardinal Krol and held that position from 1982 to 1993. On May 29, 1991, he was named an honorary prelate to His Holiness, Pope John Paul II, with the title of Monsignor.

In 1993, McFadden was named by Cardinal Anthony Bevilacqua to be the first president of Cardinal O’Hara High School in Springfield. During his tenure as president, the school’s enrollment increased from 1,540 students to 2,000 students and he helped to initiate the innovative computer “Laptops for Learning” program in the school.

In 2001, McFadden was appointed pastor of St. Joseph Parish in Downingtown, where he ministered until his appointment as auxiliary bishop of Philadelphia in June 2004. He was ordained to the Episcopacy by Cardinal Justin Rigali in the Cathedral Basilica of Saints Peter and Paul on July 28, 2004, and named as the 10th bishop of Harrisburg on June 22, 2010, by Pope Benedict XVI.

Everywhere all the time

King said McFadden was a very hands-on leader, present throughout the diocese.

“His ministry was one of being present all over the diocese, he was busy all the time making certain that the gospel was announced in every portion of our 15 counties,” he said.

King said McFadden was a “great proponent of Catholic schools and Catholic education.

“He spent a great deal of time with students in our schools,” he said.

Forrey said his teaching focused on students of all ages.

“He wanted parishes to be more committed to youth and young adult ministry, adult religious education, marriage enrichment and outreach to the institutionalized,” he said.

Forrey said McFadden was to be in attendance on the coming Monday to administer confirmation, which will now be postponed.

“His personal example was one of a deep prayer life and a deep devotion to the ministry that was placed in front of him as bishop,” King said.

King said while he was devoted to the church, McFadden had interests outside, as well.

“He was also a great sports enthusiast, particularly in support of all teams from Philadelphia,” he said.

U.S. Sen. Pat Toomey reiterated the bishop’s interest in teaching inside and outside the church.

“A native of Philadelphia, the bishop was called to serve whether he was coaching basketball or ministering to many of us as the 10th Bishop of Harrisburg,” Toomey said in a statement. “His love, caring, and spiritual guidance will be missed by all who benefited from his wisdom over the years.”

“He was very supportive of Catholic health care,” she said. “We had a nice relationship with the bishop. In fact, he helped us celebrate our 50th anniversary in March by offering a Mass in the Holy Spirit Hospital Chapel.

“What most impressed me about Bishop McFadden was that whenever he spoke to someone he would always say: please pray for me as I do for you because what is important is to have a holy bishop and holy people in the diocese,” she added. “On behalf of Holy Spirit Health System, I offer condolence to his family, the priests and staff of the Diocese.”

“I was shocked and saddened to hear of the passing of Bishop McFadden,” he said. “I worked with him closely through the years on a number of issues. He was a forceful advocate, an effective leader and a much beloved shepherd for the people of Harrisburg, Philadelphia and all of Pennsylvania. I join the Diocese of Harrisburg in mourning the passing of a good man.”

Bishop Joseph P. McFadden, 65, died unexpectedly while attending a meeting of the Catholic Bishops of Pennsylvania in Philadelphia Thursday morning, the Diocese of Harrisburg said.

The diocese reported McFadden awoke feeling ill while staying at the rectory and was taken to the hospital where he was pronounced dead at about 7:40 a.m. A cause of death has not yet been announced.

The diocese said the governance of the Diocese of Harrisburg passed to the College of Consultors upon his death. They will have eight days to elect an administrator who will be in charge of the day-to-day operation of the diocese until a new bishop is appointed by the pope.

The diocese serves about 250,000 Catholics in 15 counties in central Pennsylvania.

Philadelphia Archbishop Charles Chaput expressed shock and sadness in a statement released Thursday morning. He praised McFadden for his dedication to the church and for using "new forms of media to proclaim the message of the Gospel."

"His service in our state capital was instrumental in fostering the teachings of the church in the public square," Chaput said.

McFadden was born in Philadelphia on May 22, 1947, and grew up there with his parents, brother and two sisters. He attended Catholic schools and later graduated from Saint Joseph's University in the city.

McFadden entered the seminary in 1976 and was ordained a priest in 1981. The following year, he was appointed administrative secretary to Philadelphia Cardinal John Krol, a position he held until 1993. During that time, he was named an honorary prelate to Pope John Paul II, with the title of monsignor.

He was named by Philadelphia Cardinal Anthony Bevilacqua as the first president of Cardinal O'Hara High School in Springfield in 1993. Eight years later, he became pastor of St. Joseph Parish in Downingtown, where he served until being named auxiliary bishop of Philadelphia in 2004.

Diocesan officials in Harrisburg have eight days to elect an administrator who will oversee daily operations until a new bishop is appointed by Pope Francis.

The following funeral services for Bishop Joseph P. McFadden have been established, the Diocese of Harrisburg announced Thursday afternoon. Al…

How bishops are appointed

Bishops of the Diocese of Harrisburg

A memorial for Bishop Joseph McFadden, who died suddenly Thursday at Cathedral Parish of St. Patrick in Harrisburg.

Bishop Joseph P. McFadden celebrates his first Mass as bishop of the Diocese of Harrisburg Tuesday at Saint Patrick’s Cathedral in Harrisburg.

Flags are at half-staff at the Cardinal Keeler Center Administrative offices in Harrisburg due to the sudden passing of Bishop Joseph McFadden.