A conceptual drawing of a proposed roundabout in the area of B Street in Carlisle. 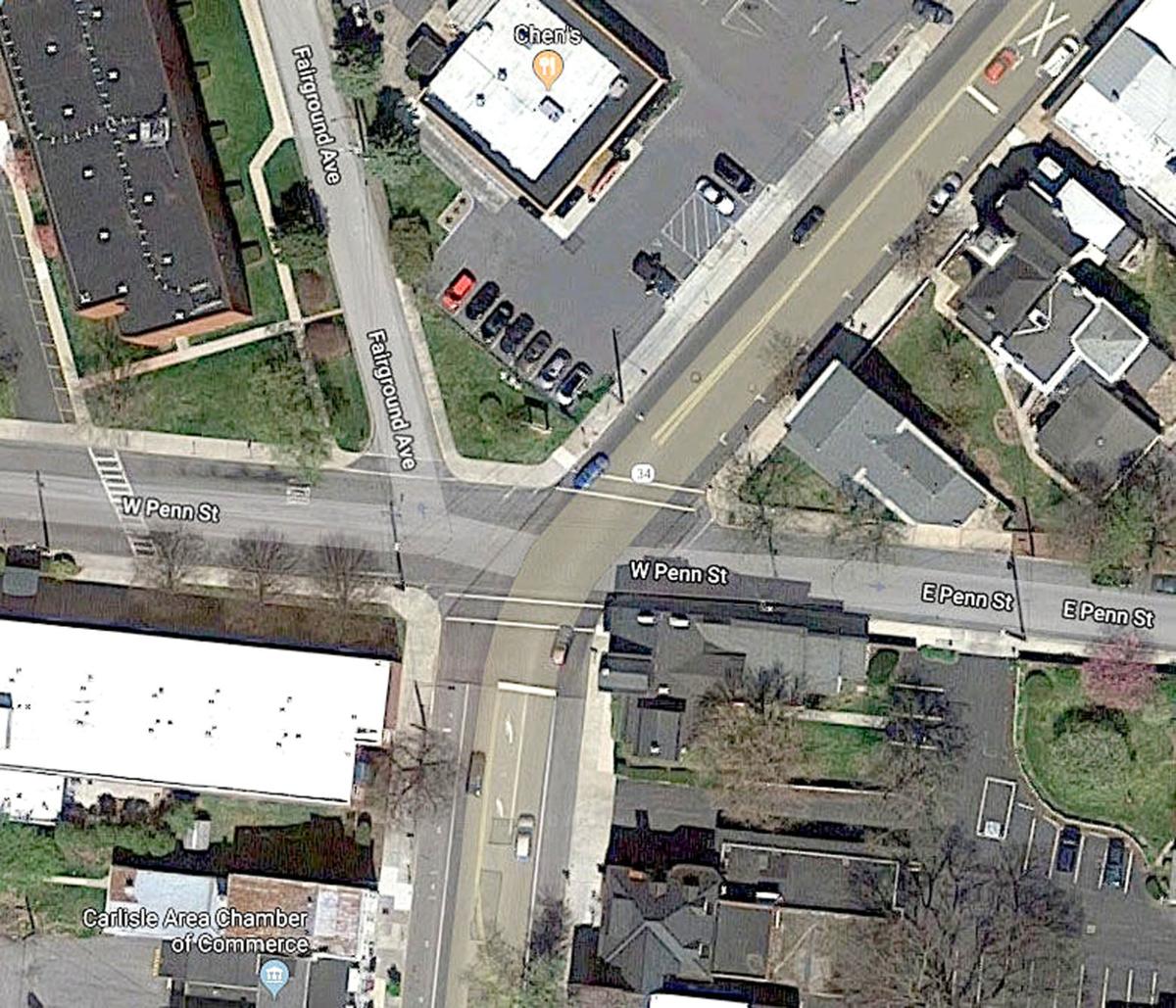 This aerial image from Google Maps shows the intersection of North Hanover Street, East and West Penn streets and Fairground Avenue in Carlisle.

A roundabout at West Lisburn and Grantham roads in Upper Allen Township opened to traffic Wednesday after more than three months of construction.

PennDOT says a recent study of traffic circles in the state shows a noticeable reduction in collisions and the severity of injuries at sites where traditional stop signs or lights have been replaced with roundabouts.

This is good news for Carlisle, which has already committed to building three roundabout intersections in the borough as part of the ongoing redevelopment projects at the former IAC/Masland and Carlisle Tire & Wheel sites.

Where It Stands: Carlisle expects to finalize rights-of-way for road project soon

“We are glad to promote the use of roundabouts throughout the commonwealth,” PennDOT Secretary Leslie Richards said in a release. “The facts speak for themselves. Roundabouts save lives and reduce crash severity over standard stop or signal controlled intersections.”

PennDOT’s study encompassed 19 intersections on state roads and had at least three years of crash data available both before and after the roundabout was built, with data years spanning from 2000 to 2018.

The total number of crashes on the studied intersections dropped 34 percent, from 138 incidents to 91, in the three years after roundabouts were installed versus the comparable prior years, according to PennDOT.

The number of injuries at those intersections classified as “serious” by the Pennsylvania State Police dropped 90 percent, from 10 injuries pre-roundabouts to just one serious traffic injury post-roundabouts.

Roundabout ready for use near Messiah College in Upper Allen Township

After weeks of motorist detours, the intersection of West Lisburn and Grantham roads was reopened to traffic early Wednesday morning in Upper …

One of the 19 roundabouts included in the study was in Cumberland County, at the intersection of Sunnyside Drive, Spring Road and Mountain Road in northern Middlesex Township near the Cumberland-Perry county line.

What remains up in the air are plans to have a grocer on the mixed-use site to help serve the northwest Carlisle residential area.

Carlisle has committed heavily to the concept as part of what the borough calls the Carlisle Connectivity Project — a broad range of infrastructure improvements intended to support major redevelopment projects at the former IAC/Masland factory site and the former Carlisle Tire & Wheel site.

Both former industrial sites are being rehabilitated into mixed-use developments, the former by Carlisle Auto Industries, the development arm of Carlisle Events, and the latter by PIRHL, a Cleveland-based developer that specializes in affordable housing.

Funding for Carlisle’s infrastructure improvements, including roundabouts, comes partially from PennDOT itself via a $1.5 million grant from the state’s Multimodal Transportation Fund that was awarded in 2014.

Changes to key roads on the north end of Carlisle could begin as early as next month with construction continuing for three years.

Borough officials said this summer that contracts for the construction of the roundabouts will likely be issued at the end of the year, and work will begin in early 2020.

Intersection at West Street, Willow Street and Walnut Bottom Road could be next for roundabout in Carlisle

The five-point intersection of West Street, Willow Street and Walnut Bottom Road in Carlisle could be the future site of a roundabout.

A conceptual drawing of a proposed roundabout in the area of B Street in Carlisle.

This aerial image from Google Maps shows the intersection of North Hanover Street, East and West Penn streets and Fairground Avenue in Carlisle.

A roundabout at West Lisburn and Grantham roads in Upper Allen Township opened to traffic Wednesday after more than three months of construction.