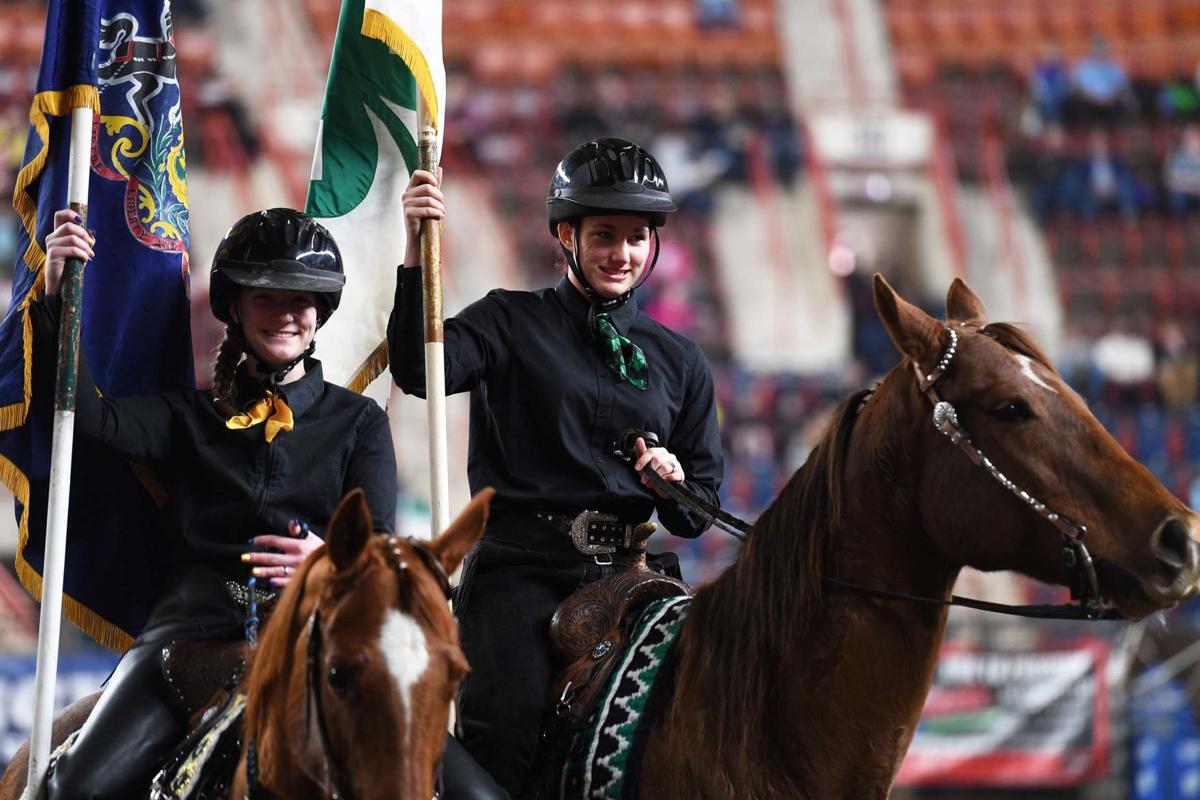 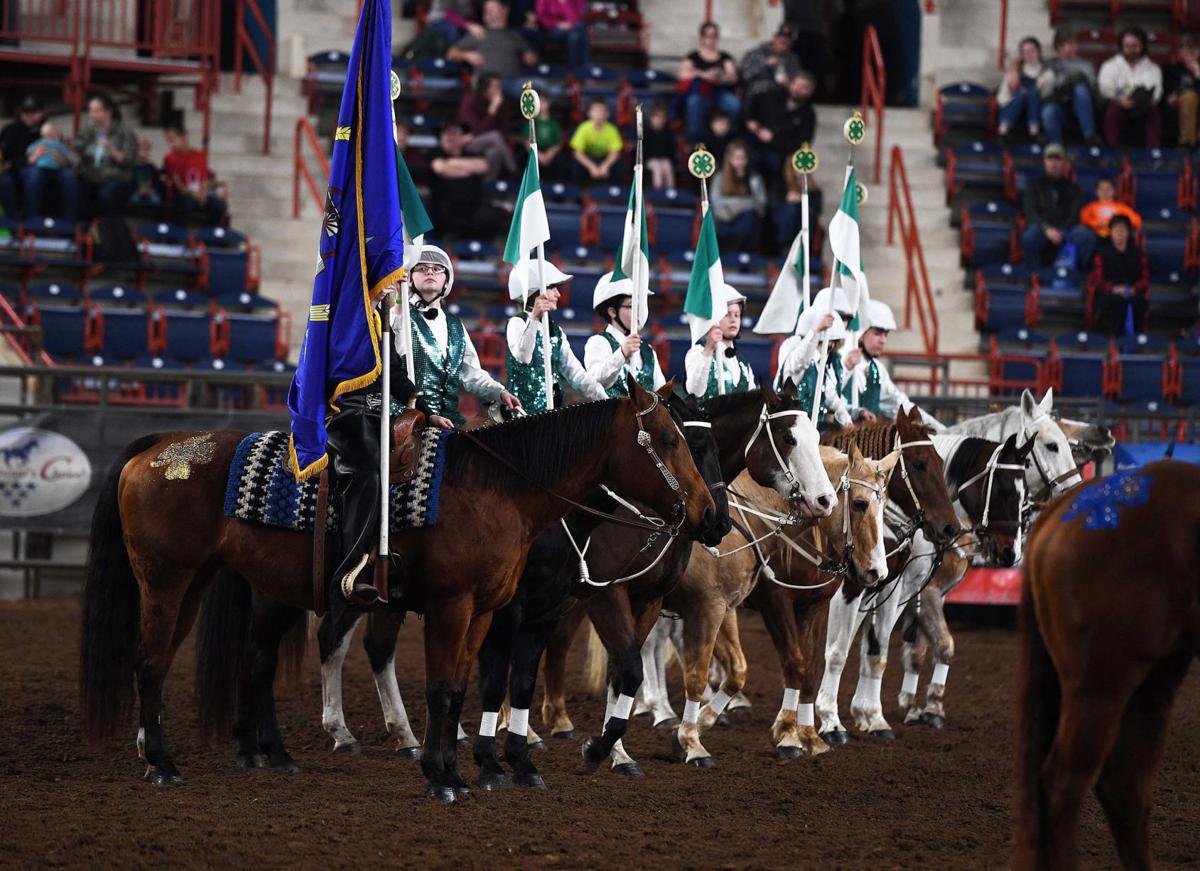 The Cumberland County 4-H drill team entertains the crowd with a display of precision riding skills on the first day of the 104th Pennsylvania Farm Show. 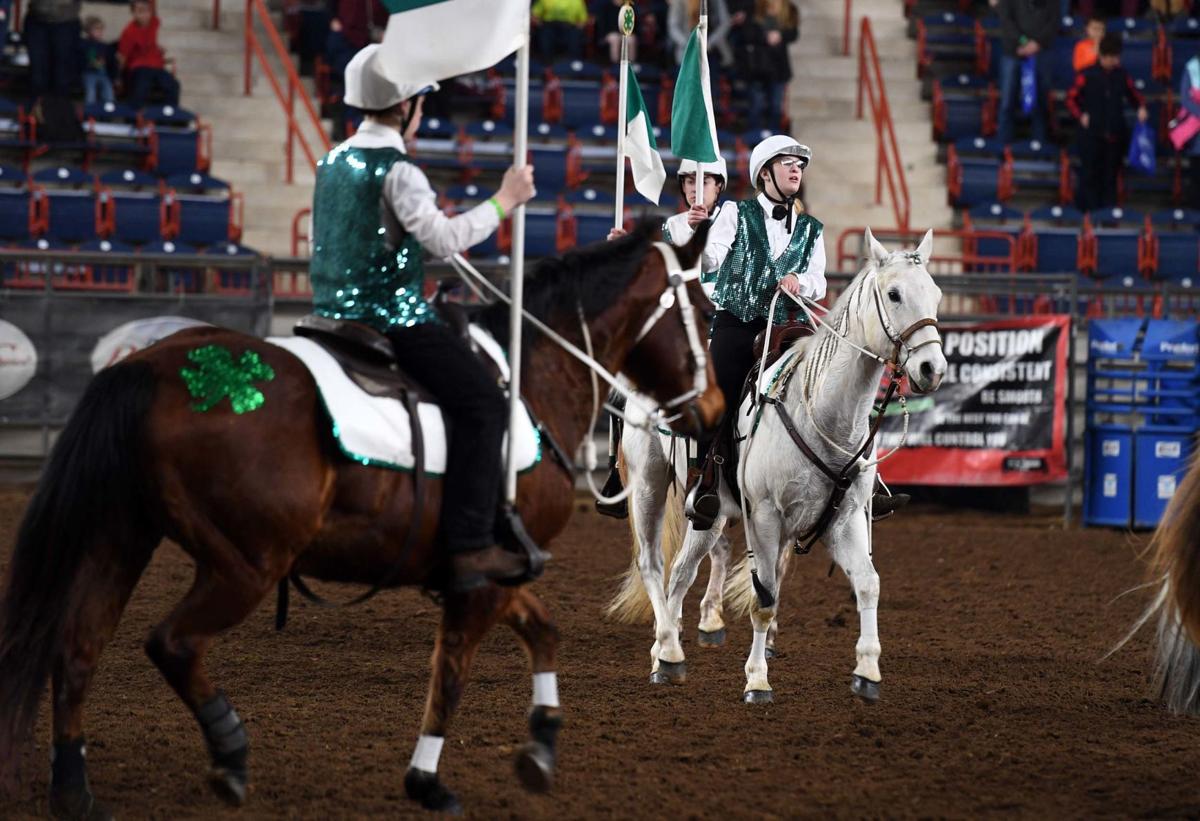 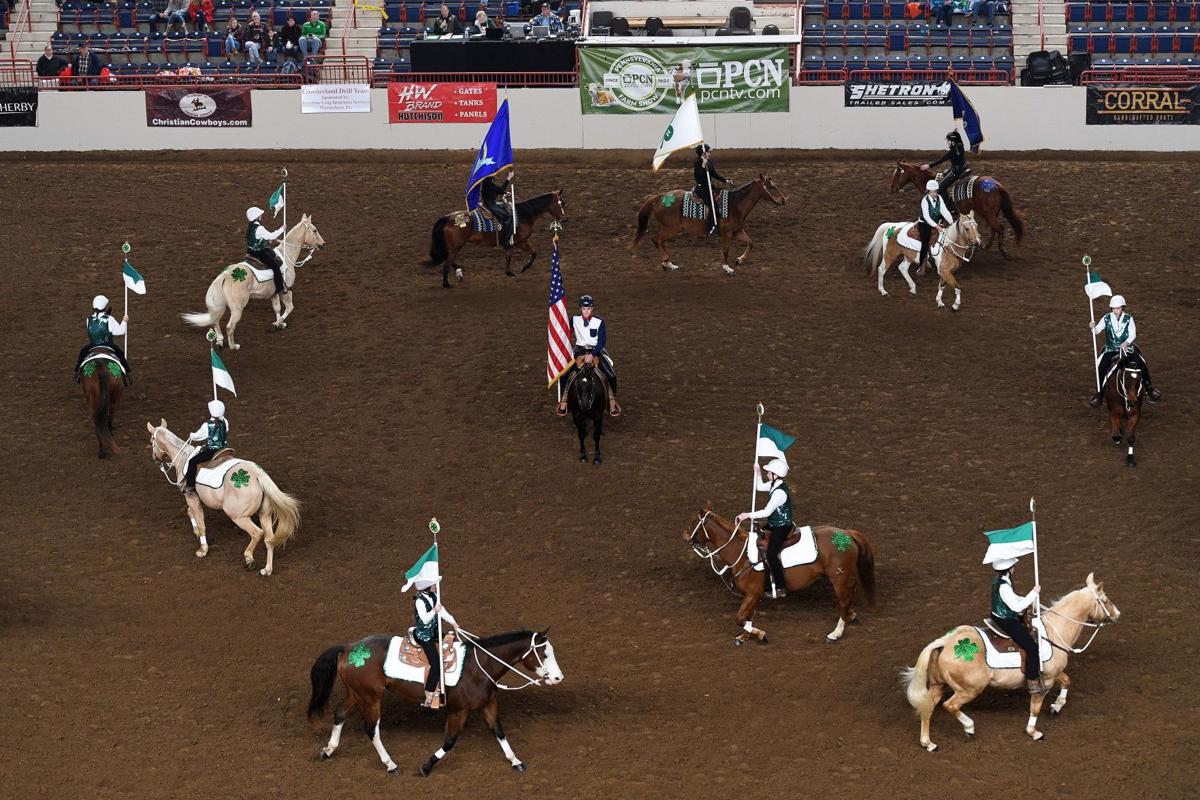 With a smile on her face and an ache in her heart, Bethany Morris helped lead the Cumberland County 4-H Mounted Drill Team in a flawless performance Saturday, the opening day of the 104th Pennsylvania Farm Show.

Although Morris rode an Appendix Quarter horse named Bubba around the New Holland Arena, her mind was on her beloved Paint horse Katie, who died five weeks ago.

“It’s a bittersweet day,” the Commonwealth Charter Academy senior said shortly before the team’s 65th Farm Show performance. “But I have a part of Katie’s tail braided into a heart, which is on my saddle. So she’s with me today.”

Led by Sandy Long, the team’s founder and director since its inception, the team gave a performance that was part patriotic, part whimsical and all heart. The show featured a blend of graceful movements to patriotic and military music.

Morris, of Landisburg, has ridden on the drill team for six years. For four years, she rode Katie, a “spunky and sassy” 22-year-old Paint. Then tragedy struck.

“On Thanksgiving, I went out to feed Katie at 5:30 p.m.,” Morris said. “I saw a lot of blood and realized that she had been shot in her front leg. I ran and got my Mom, who called the veterinarian.”

Unfortunately, Katie was bleeding heavily and the veterinarian was not able to save her. Although Morris was sad, she knew she wanted to stay with the drill team.

“I had to regroup,” she said. “I started riding my mother’s horse, Bubba. He’s laid back and mellow, very different from Katie.”

Nonetheless, Morris determined that the show must go on. On Saturday, Morris and the team – 17 other riders and five banner carriers—rode their horses to such patriotic melodies as “Stars and Stripes Forever,” various marches by John Phillip Sousa and a patriotic medley of military songs.

The equestrians all carried flags, some large American, Pennsylvania, Cumberland County and 4-H flags, others smaller green and white flags. Morris carried the 4-H flag and led half of the team through their routines.

The young riders sat proudly atop their horses performing a variety of graceful movements, forming a carousel of horse, crisscrossing through the arena in a smooth crossover and even demonstrating a wagon-wheel formation in which they rode four abreast. The crowd sat mesmerized.

By the end of the program, the patriotism in the arena was palpable. As a recording Lee Greenwood’s “God Bless the USA” blared through the arena, the mounted drill team lined up and the audience stood respectfully, most people holding their hands over their hearts. Many sang along with the chorus.

As the song ended, the crowd applauded the team and their country. Long smiled at Morris.

“Bethany did a great job leading,” she said. “After the loss of Katie, she came to the next practice with Bubba. I was impressed that she handled the loss with dignity. She’s resilient.”

Long said the team truly is a family with three or four generations of some families represented. She and her husband, Maynard, have a son, Trevor who was on the team and whose son, Wyatt, now is.

Albert Barrick’s sons, Clinton and Clifton were on the team. Now, Clinton’s child, Delaney, and Clifton’s child, Cloey, are on it. John Rebert helped lead the team. His daughters, Mary Jane and Barbara were on it, as is Mary Jane’s daughter, Liz Valle, and her grandson, Wade, 8.

TCE could not be reached for comment about what the issue is with the gas pipeline that caused the need for the repair, but Carroll Township Police Chief Thomas Wargo said the company was repairing a leak.

At a school board meeting on Tuesday night, Superintendent David Christopher presented a slideshow detailing officials’ rationale behind the proposal.

Here is a list of the 2020 spring musicals at area high schools. All musicals take place at the school’s auditorium unless otherwise noted.

Today's Sentinel police log includes an attempted use of counterfeit money at McDonald's and a man who police said attempted to run over another man.

The fire chief said the driver had a "coughing or sneezing fit" that sent his rig into the tree located 15 feet outside his front window.

The Cumberland County 4-H drill team entertains the crowd with a display of precision riding skills on the first day of the 104th Pennsylvania Farm Show.