State Police at Carlisle are looking for the driver of this gray 2011 Infiniti G37 bearing PA registration KZJ4211 as a person of interest in the fatal shooting of a Philadelphia man in Shippensburg Township Sunday evening. 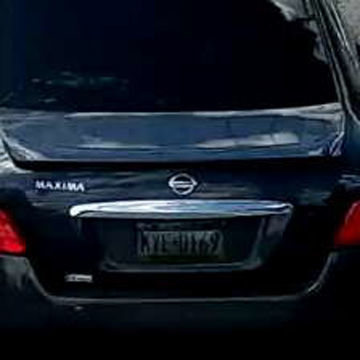 State Police at Carlisle are looking for the driver of this Nissan Maxima as a person of interest in the fatal shooting of a Philadelphia man in Shippensburg Township Sunday evening.

Two persons of interest in a shooting that killed one man and injured another in Shippensburg Township Sunday evening are students enrolled at Shippensburg University, according to State Trooper and Public Information Officer Megan Frazer.

The men, Quentin Eric Furlow Jr., 20, and Clayton Steve Wilson, 20, both of Philadelphia, are considered armed and dangerous, Frazer said.

The two victims in the case are not Shippensburg University students, she said.

The university said on its website the two men are not in class and there is no evidence they are on the campus. Frazer said authorities do not know their whereabouts.

Shippensburg University cancelled classes for the remainder of the day as of 2 p.m. "out of an abundance of caution," according to a statement posted on the university's website. Shortly before 8 p.m. Monday night, the university announced that, based on information it received from the state police, all classes and activities would resume on Tuesday.

"Although we have not received information that they are close to campus, state police have named the persons of interest as suspects and describe them as armed and dangerous," the university wrote. "We recognize there is an increased level of anxiety."

All university activities were also canceled for the remainder of the day, and nonessential personnel were dismissed.

State Police at Carlisle said they are looking for two Philadelphia men as persons of interest after a shooting that killed one man and injured another in Shippensburg Township Sunday evening.

Police said they are looking for Quentin Eric Furlow Jr., 20, and Clayton Steve Wilson, 20. Both are black men, but police did not release any further details about what they look like or release photographs of them, as of Monday afternoon.

State Police said during a news conference that they consider the men armed and dangerous.

The announced persons of interest come after a shooting at 7:55 p.m. Sunday on Rotz Avenue in Shippensburg Township that killed Shakur Myers of Philadelphia, who was found dead from gunshot wounds. A second Philadelphia man was transported to Geisinger Holy Spirit Hospital for a gunshot wound, and police said he was listed in critical condition.

The shooting occurred near the campus of Shippensburg University, which released a statement on its website Monday. The university said it will support the State Police in its investigation until the suspects are identified and apprehended.

One person is dead and another person is in critical condition after receiving gunshot wounds in Shippensburg Township on Sunday evening, according to State Police at Carlisle.

The shooting occurred at 7:55 p.m. Sunday on Rotz Avenue, behind the 200 block of High Street, police said.

Police did not identify the shooter but said "individuals of interest have been identified." Anyone with information is asked to contact State Trooper John Boardman at 717-249-2121.

The location of the shooting is near Shippensburg University.

State Police Lt. Mark A. Magyar held a press conference late Sunday night and said law enforcement officials did not yet know whether the victims were university students, according to the Slate, Shippensburg University's student-run newspaper.

Two messages were sent to university students via the university's emergency alert system, the Slate said. According to the second alert issued to students at 11:18 p.m., "State Police report there is no immediate threat to the public at this time and continue to investigate.”

North Middleton Township Police are warning residents not to fall for a Social Security scam after receiving complaints from several residents.

Where It Stands: Hap Seiders, accused of murdering wife, seeks to keep evidence from jury

Warrants show police believed it probable that in 2012 Rabihan Seiders had been killed, dismembered and partially burned on the Willow Mill Park Road property owned by her husband, Hap Al Seiders.

A man fired several rounds from a BB gun into a parked but occupied vehicle in Carlisle on Thursday, police said.

Update: Crash cleared Monday afternoon on I-81 north near Carlisle

PennDOT's traffic website said the multi-vehicle crash on Interstate 81 north near Carlisle was cleared at 2:35 p.m.

Although Furlow and Wilson remain missing, Shippensburg School District Superintendent Chris Suppo issued a statement Monday evening saying "updated information has led law enforcement to believe that the persons of interest are likely not in the Shippensburg area at this time."

The State Police are “working the investigation around the clock,” investigator Mark Magyar said at a brief press conference Tuesday evening.

"The dog was obviously stressed and malnourished to a degree you could see its rib cage and also had open wounds near its tail," police said.

Clayton Steve Wilson was arrested on Oct. 10 on a related drug charge and bail was set at $750,000, police said in a news release.

Charges were filed Sunday against Samir Rodney Stevenson, 21, of Carlisle, who was one of two people shot on Oct. 6 in what police called an attempted drug-related robbery involving two SU students.

State Police at Carlisle are looking for the driver of this gray 2011 Infiniti G37 bearing PA registration KZJ4211 as a person of interest in the fatal shooting of a Philadelphia man in Shippensburg Township Sunday evening.

State Police at Carlisle are looking for the driver of this Nissan Maxima as a person of interest in the fatal shooting of a Philadelphia man in Shippensburg Township Sunday evening.