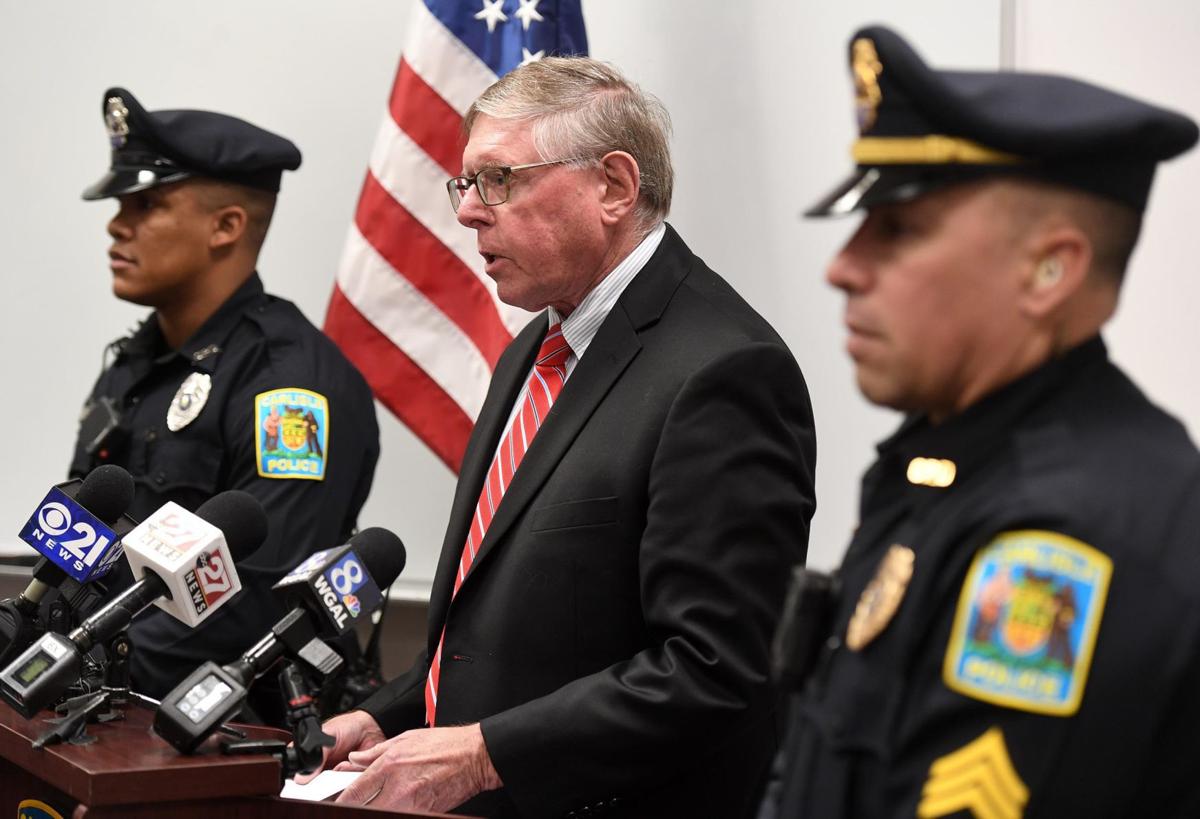 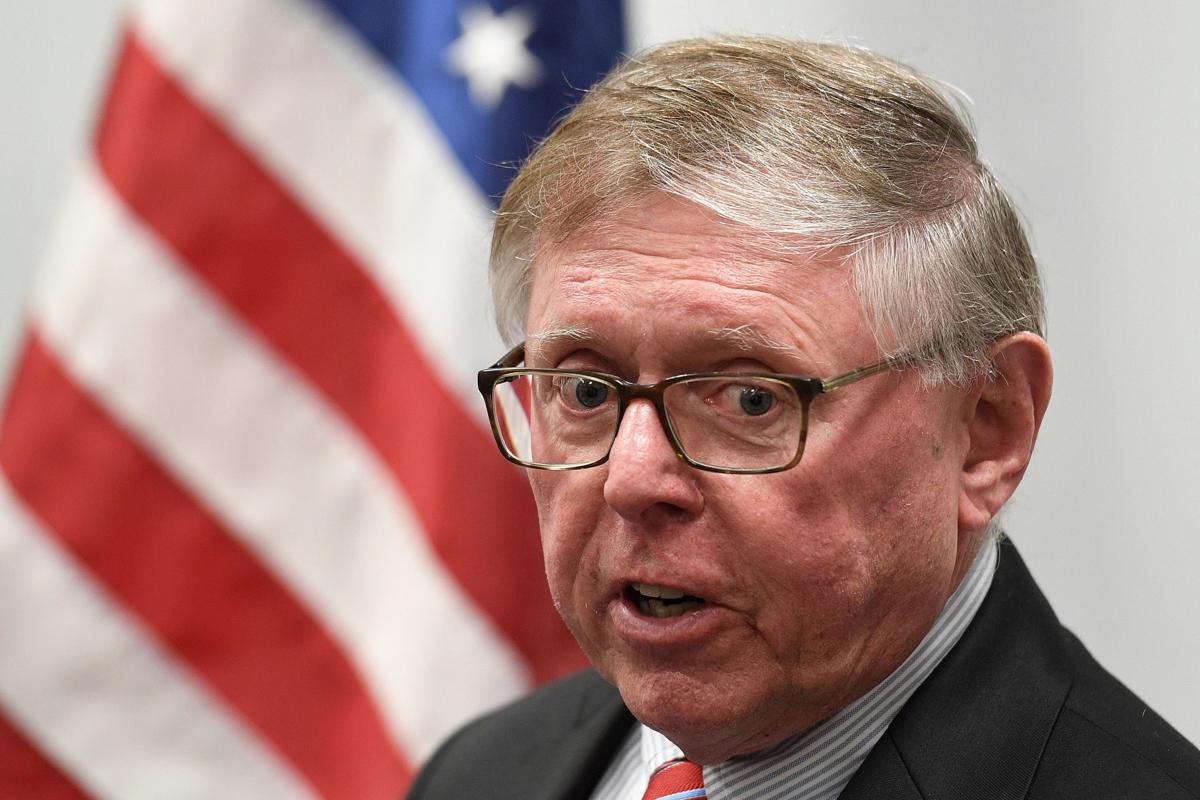 Tyrale “Rell” Hill-Price texted Rhyhiem Hodge’s friend and housemate on Nov. 12, 2017, and learned he was in Allentown buying Nike Air Jordan sneakers for Hodge’s birthday, according to a grand jury report.

Later that night, Hill-Price called the friend back to console him, which the friend found “odd.” By that time, prosecutors say, Hill-Price had helped ensure the friend would never be able to give Hodge those birthday shoes.

A Cumberland County grand jury indicted Hill-Price and Jones on Dec. 4 after nearly a year and a half of investigation with criminal homicide, a charge Williams already faces.

“We told you we weren’t finished, and we weren’t,” he said to members of Hodge’s family during a news conference Monday. “Let it be known that (when) a criminal comes to Carlisle to commit violent crimes, the Carlisle Police Department and our associates will pursue you until justice is served for the victims and their families.”

The grand jury report, made public Monday, explains what allegedly happened Nov. 12, 2017, that led to a shooting in the 200 block of West North Street in Carlisle.

On Nov. 10, two days before the shooting, Williams obtained a rented, dark-colored Kia from another man in exchange for heroin and crack cocaine, the grand jury report states. The next day, Hill-Price promised the man money and more drugs in exchange for allowing Hill-Price and Williams to continue using the Kia.

Hill-Price regularly supplied Hodge’s friend with cocaine, which he then sold, according to the grand jury. The Sentinel is not naming the friend since no charges have been filed against him.

At about 2:30 p.m. Nov. 12, Hill-Price texted the friend to ensure he was still in Allentown and would not be home during the planned robbery of Hodge, who sold marijuana.

Williams, Hill-Price and Jones had agreed to facilitate a robbery of Hodge to obtain money and drugs, the grand jury concluded. Hill-Price was allegedly responsible for organizing and planning the robbery, Cumberland County District Attorney Skip Ebert said.

During the afternoon of Nov. 12, Hodge and others were watching a football game at their home when Williams knocked on the rear door, according to the grand jury. Williams asked for Hodge’s friend.

The friend wasn’t there, but Hodge gave Williams a “dime bag” of marijuana for cash. They began to talk about football, and Williams asked for a drink. When a woman went to the refrigerator to get a bottle of water, Williams grabbed her, put a handgun to her head and demanded drugs and money.

Hodge grabbed his own handgun and charged at Williams, who shot Hodge several times, the report states. A struggle ensued, during which Hodge stabbed Williams in his inner right thigh with a kitchen knife. Williams fled to the Kia, which was parked at a nearby alley.

Police were dispatched at 3:12 p.m. and found Hodge dead from the gunshot wounds by the time they arrived.

Where It Stands: Arrested in 2017, man awaits trial in Carlisle slaying

Williams went to Harrisburg Hospital for treatment of the stab wound, and police matched the DNA of blood on his clothing with blood at the crime scene, according to the report. Officers also recovered the Kia, and found a phone belonging to Hill-Price.

Text messages sent by Hill-Price and cell phone records identifying the phone’s location helped convince police that Hill-Price was involved in the robbery. Records were also obtained for Jones’ phone, which placed him with Hill-Price during the time of the robbery and shooting, the grand jury said.

The three men were later involved, either directly or as accomplices, in disposing of the handgun Williams was using and disposing of Hodge’s handgun, which Williams had taken from him during the fight, the report said.

"The evidence clearly showed that Christopher Williams was the individual who pulled the trigger, which ultimately ended the life of Rhyhiem Hodge,” the grand jury reported. However, Hill-Price and Jones were “equally liable” for Hodge’s death because they were involved in planning and perpetrating the robbery and assisting Williams in leaving the scene of the crime.

Ebert said he has not yet decided whether he will seek the death penalty against Hill-Price and Jones. The death penalty is only available in Pennsylvania for first-degree murder, which requires a specific intent to kill. Normally that intent to kill is limited to the person who pulls the trigger, but the "organizer" of a shooting could also qualify, Ebert said.

“I have not absolutely made that determination yet, because it’s a unique legal scenario,” he said.

The Pennsylvania Supreme Court permitted the Cumberland County grand jury to issue an indictment due to witness intimidation that has occurred, is occurring, or is likely to occur. That permits prosecutors to avoid a preliminary hearing that could publicly expose witnesses in the case, Ebert said.

Hill-Price and Jones were both arraigned and confined to prison with bail denied, according to Ebert. A hearing is scheduled for 9 a.m. Feb. 20 in front of Cumberland County Judge Christylee Peck.

Hill-Price and Jones were indicted by the grand jury on charges of criminal homicide, robbery, criminal conspiracy to commit robbery, receiving stolen property, recklessly endangering another person, tampering with or fabricating physical evidence, and kidnapping. Hill-Price was charged with firearms not to be carried without a license, and Jones was charged with person not to possess a firearm.

Williams was charged by Carlisle Police shortly after the shooting due to the quick turnaround on DNA testing. He faces charges of murder in the first and second degree, criminal homicide, aggravated assault, prohibited possession of a firearm, unlawful restraint and recklessly endangering another person.

Ebert is seeking the death penalty against Williams. After a number of continuations in court, a pre-trial conference is scheduled for Jan. 13, 2020, in front of Peck. Williams remains in prison.

Two people have been indicted by a grand jury in relation to the 2017 shooting death of Rhyhiem Hodge in Carlisle, according to the office of Cumberland County District Attorney Skip Ebert.

Ebert will hold a news conference Monday afternoon in regard to the Dec. 4 grand jury indictments of Tyrale Hill-Price and Cordae Jones, who have both been charged with criminal homicide.

The indictments stem from the Nov. 12, 2017, shooting of Hodge, who was killed in a robbery gone wrong.

Christopher Jaquell Williams, 27, of Harrisburg, was charged shortly after the shooting with murder in the first degree, criminal homicide, aggravated assault and other felonies and misdemeanors in Hodge's death. Ebert previously announced he is seeking the death penalty.

Carlisle Police said in an affidavit that Williams went to Hodge's home in the 200 block of West North Street in an attempt to purchase marijuana. A witness told police Williams took her hostage, placed a gun to her head and demanded money before shooting Hodge, who suffered gunshot wounds to the head, hip and ear, police said.

According to the grand jury report, "the evidence clearly showed that Christopher Williams was the individual who pulled the trigger, which ultimately ended the life of Rhyhiem Hodge." However, Hill-Price and Jones were involved in planning the robbery that led to Williams shooting Hodge. They also were the driver and passenger in the vehicle Williams used to flee the scene and helped to tamper with evidence after the fact, the report states.

Hill-Price and Jones were indicted by the grand jury on charges of criminal homicide, robbery, criminal conspiracy to commit robbery, receiving stolen property, recklessly endangering another person, tampering with or fabricating physical evidence, and kidnapping. Hill-Price was charged with firearms not to be carried without a license, and Jones was charged with person not to possess a firearm.

Pre-trial conferences in Williams' case have been continued through much of 2019. Another pre-trial conference is scheduled for Jan. 13, 2020, in front of Cumberland County Judge Christylee Peck. Williams remains in prison.

Check back to Cumberlink.com as more information becomes available.

A Harrisburg man accused of shooting and killing 35-year-old Rhyhiem Hodge on Nov. 12 in Carlisle is one step closer to trial.

An apartment fire in Carlisle early Friday morning occurred because a woman in the apartment was cooking while intoxicated, borough police said.

According to the Atlantic County Prosecutor's Office, Dean Leon, 51, of Enola, had developed an online relationship with the girl in 2017. Leon had arranged to meet the girl at the Somers Point Library, authorities said. 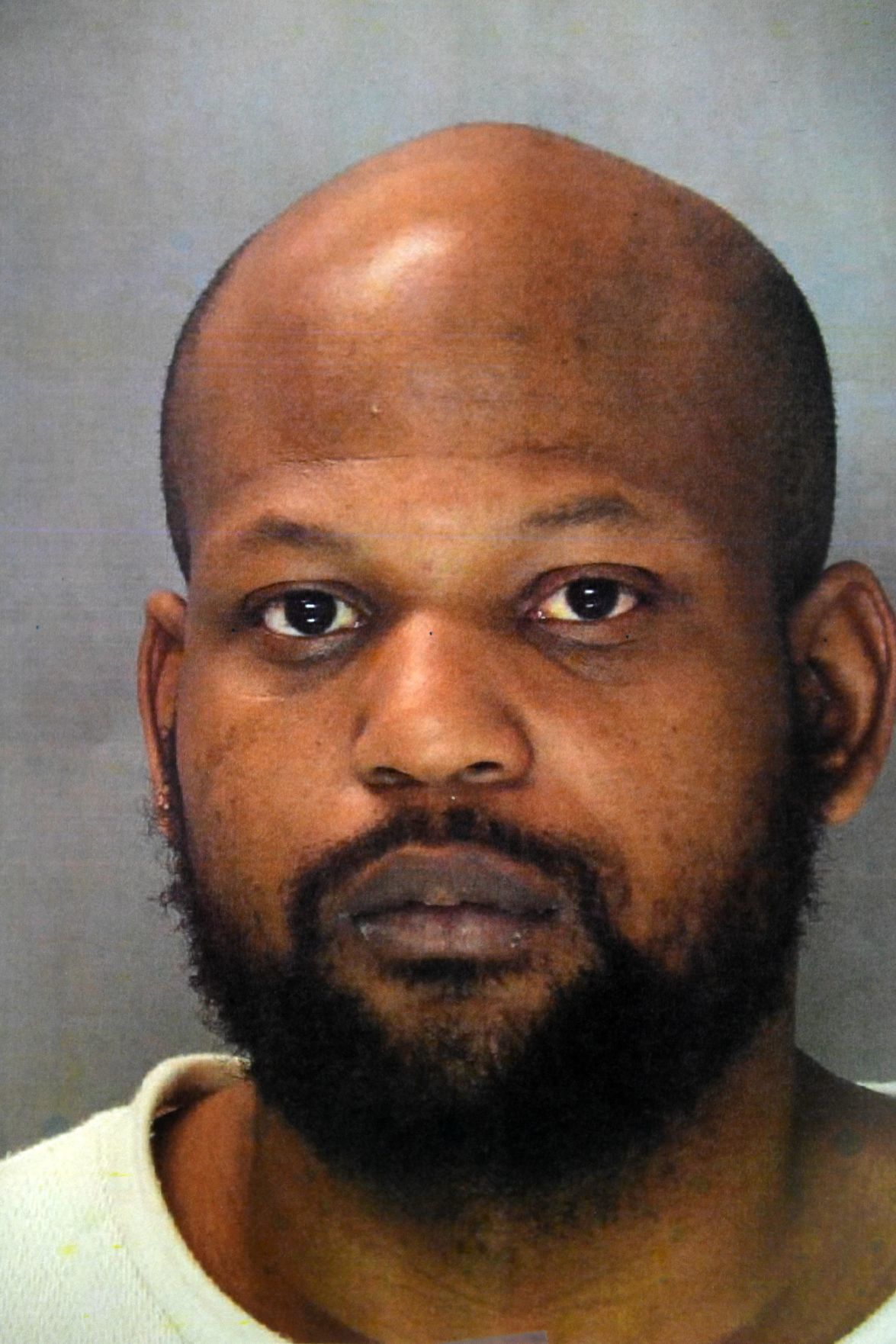 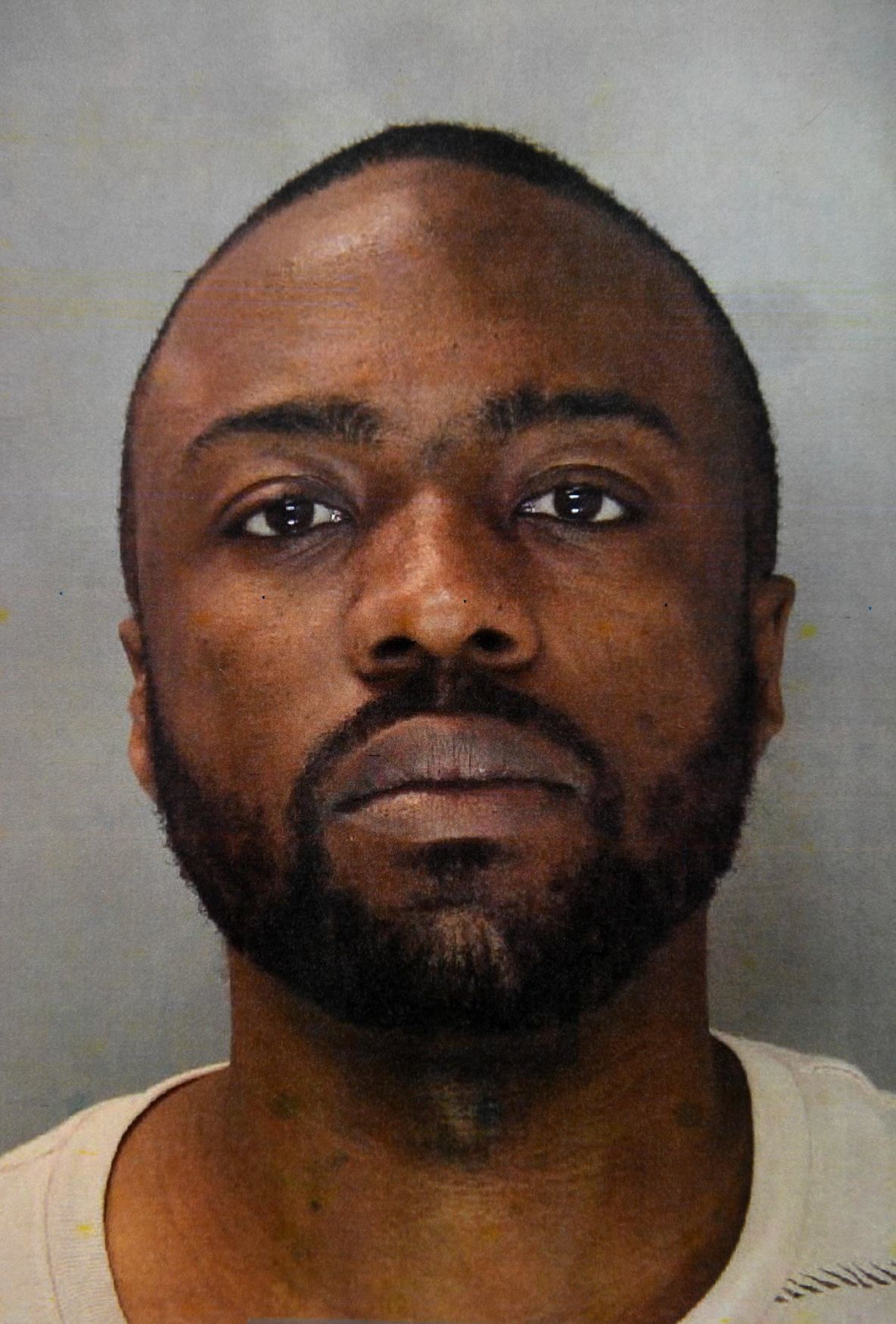