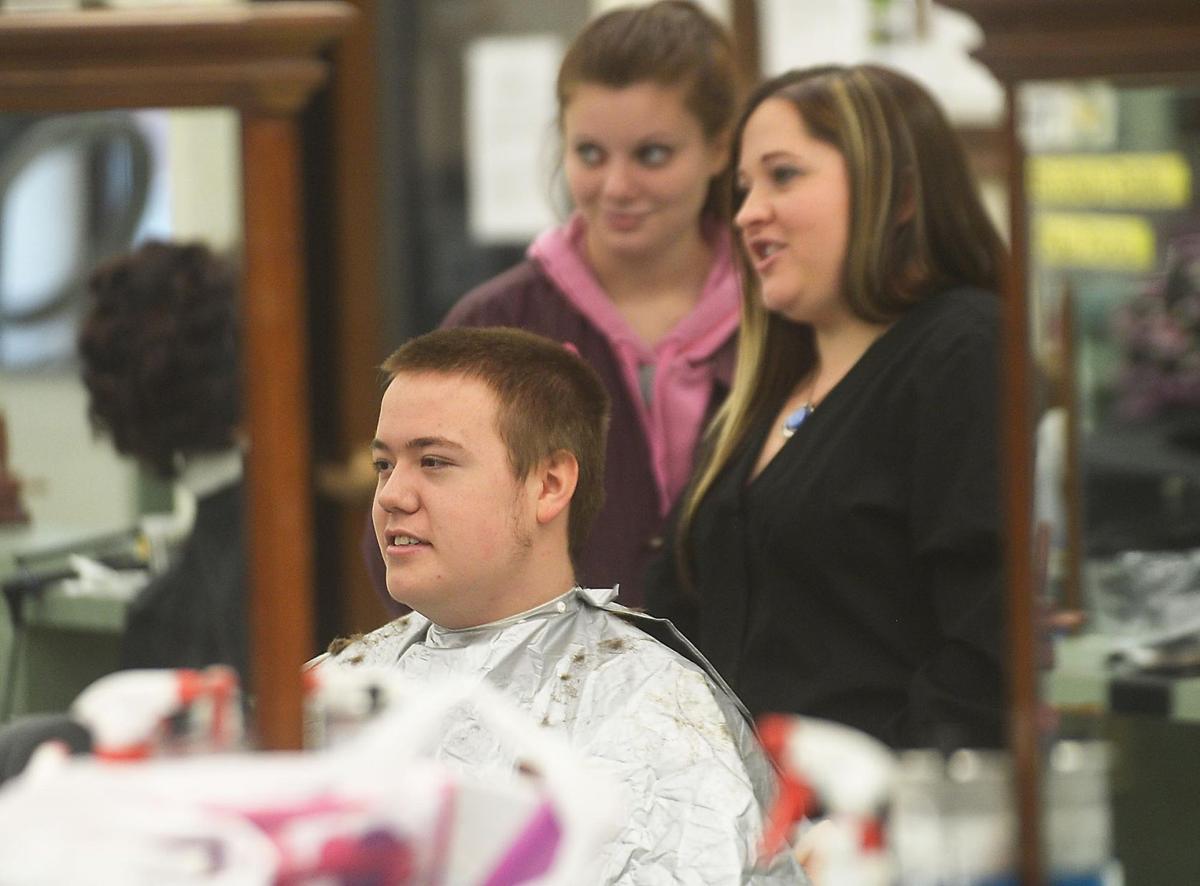 Cumberland Perry Area Vocational Technical School cosmetology student Emilee Raback, back left, is instructed by Rachael Miller, back right, before cutting Chris Boyers, 18, hair during a cut-a-thon at the school. 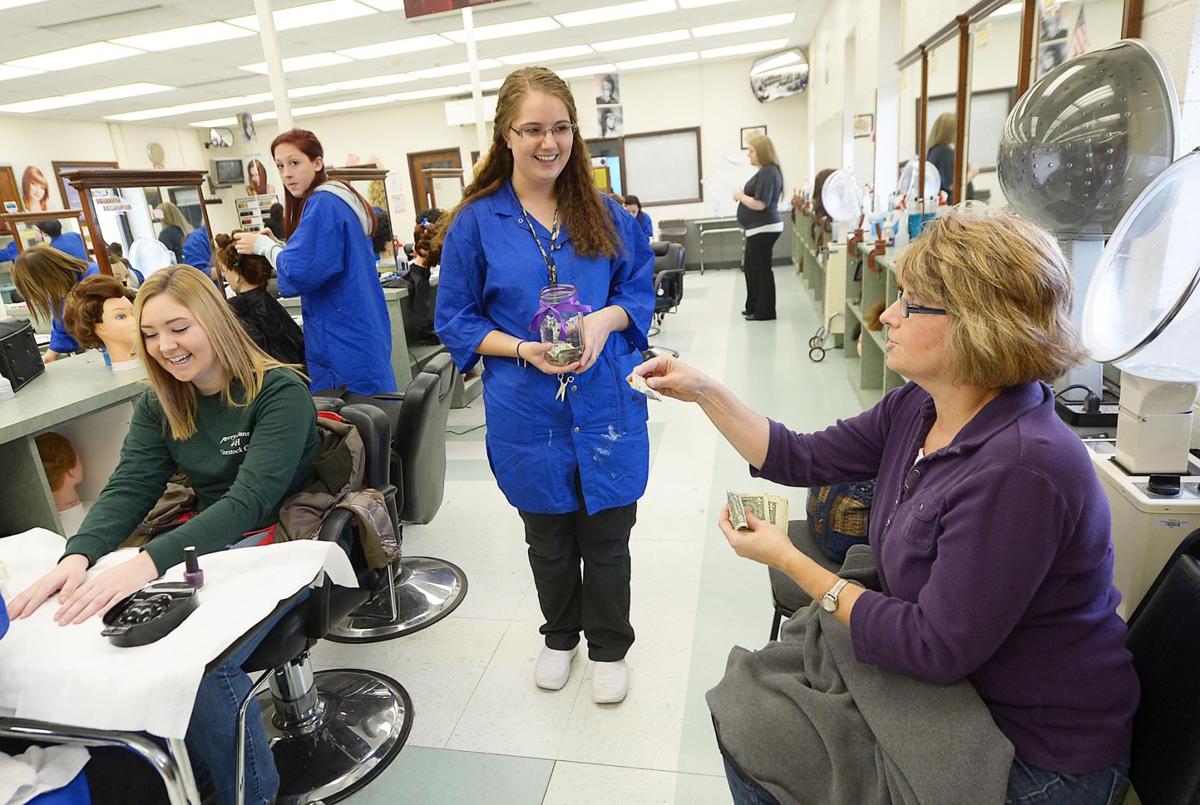 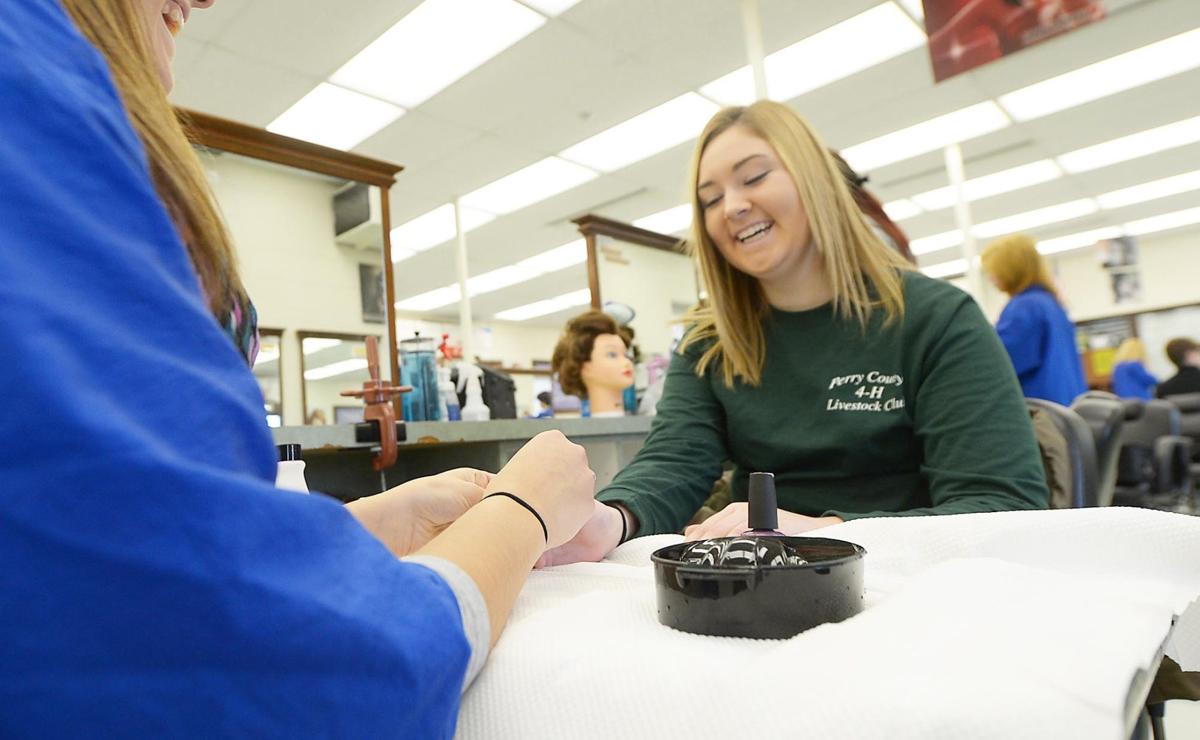 Janell Baker, 16, receives a manicure at Cumberland Perry Area Vocational Technical School during a cut-a-thon at the school on Thursday, November 13, 2014. 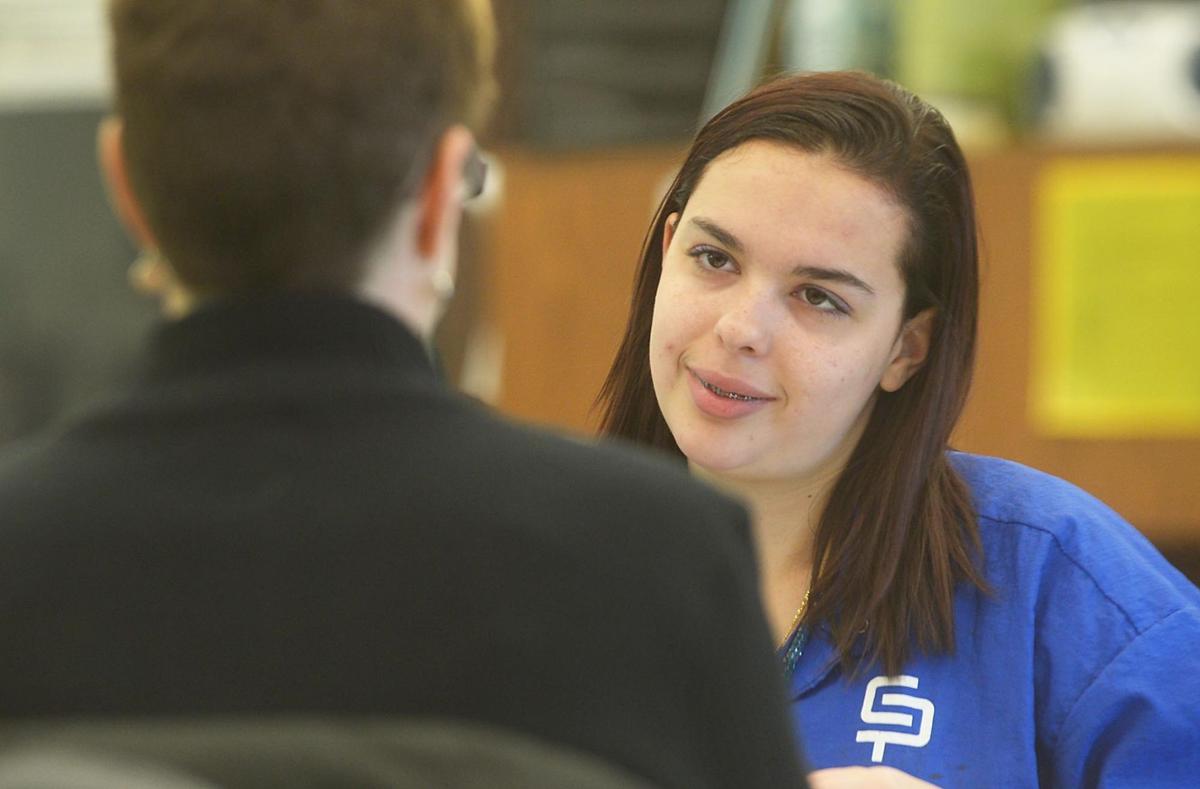 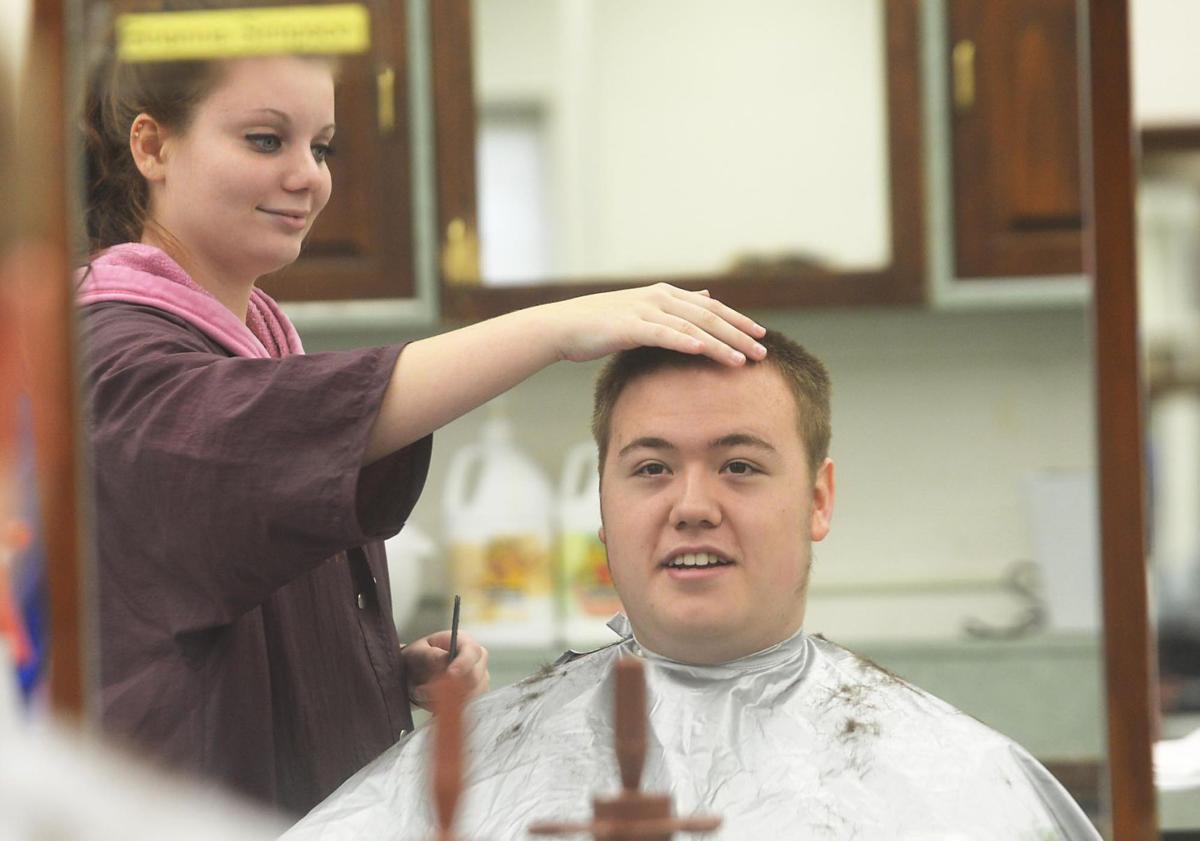 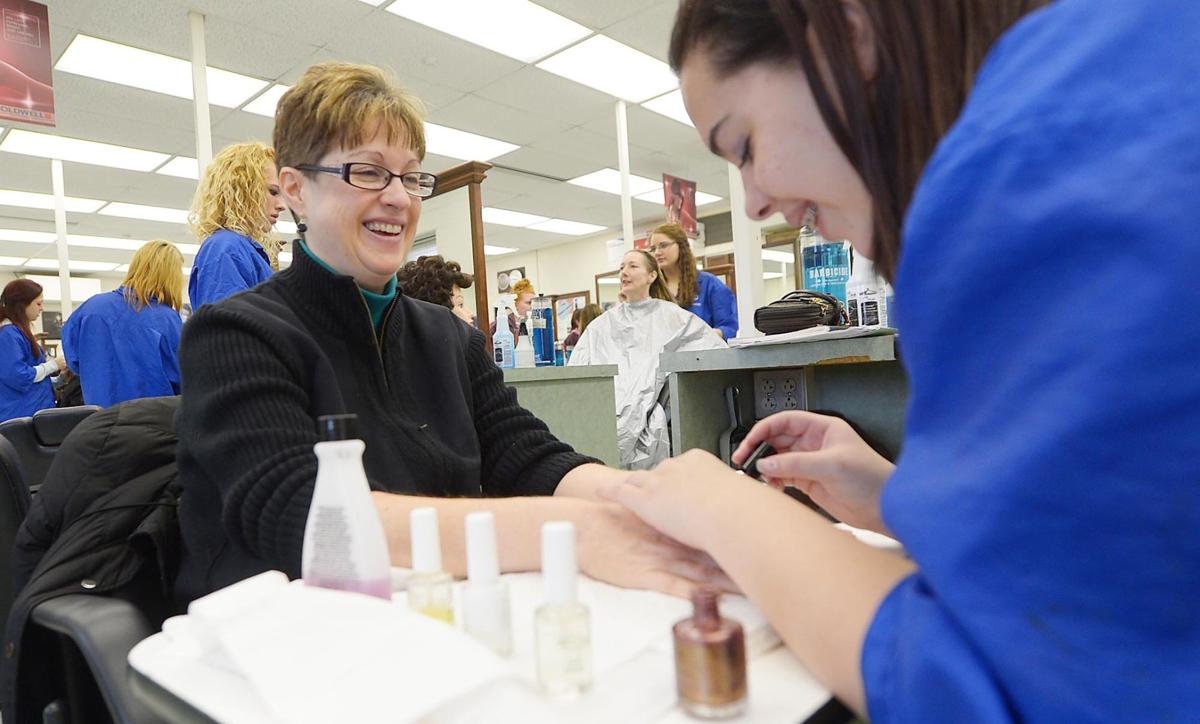 By Daniel Walmer. The Sentinel

SILVER SPRING TOWNSHIP — When Jayda Hess was 13, her mother, Angie Shipman, noticed an improvement in Hess’ behavior and grades — largely because she was motivated to spend time with her 16-year-old boyfriend, a smart, pleasant boy who often would eat dinner at her New Cumberland home.

Looking back, Shipman wishes she had looked more closely at their relationship.

Hess suffered from slaps, kicks, threats and demeaning comments for nine months throughout the eighth-grade school year before her parents discovered the abuse thanks to a bleeding lip and a friend’s report.

Hess isn’t alone. One in three adolescents have some sort of domestic violence in their relationships, said Melissa Davis, public education coordinator for Domestic Violence Services of Perry & Cumberland Counties. If that number seems surprisingly high, that might because you have a stereotype of domestic abuse in your mind — possibly that of a middle-aged, white woman, Davis said.

“We have a quote: ‘There is no face to domestic violence.’ This happens to every age, race, socioeconomic status, religion,” and to both men and women, Davis said.

Hess, 16, is now a junior cosmetology student at Cumberland Perry Area Vocational Technical School, and prompted her class to raise awareness and funds for Domestic Violence Services at the school’s cut-a-thon Thursday morning.

Hess didn’t have a perfect life — her birth father is not involved in her life, and she had trouble with her grades in middle school — but Shipman and Hess’s stepfather created a stable home life, Shipman said.

When Hess started going out with her abusive boyfriend in the beginning of eighth grade, he also wasn’t perfect, in Shipman’s opinion. On the other hand, he was respectful and nice, Hess’s grades were improving, and Shipman knew that if she cut off the relationship, it would cause problems with Hess, she said.

He treated Hess well for three months before he hit her for the first time, Hess said. She broke off the relationship, but after a month, he convinced her to start dating him again.

“He said how he changed, how he’d never do it again, he was sorry, and you believe him at that point — and especially, like, I’m 13,” she said. “I think, ‘I believe him, he’s the most amazing man in the world.’”

After about one month, he began kicking Hess and otherwise abusing her again, even threatening to kill her, she said. She spent the next five months hiding the bruises all over her body from her parents.

Hess is still not entirely sure why she stayed with him, but the mental abuse he perpetrated was a contributing factor, she said. Mental abuse is just as bad as physical abuse, especially when the abuser convinces you that you’re worthless and no one else would be interested in dating you, she said.

“You’re like, ‘I can’t leave. Who am I going to go to? He told me I’m this and this — who would love somebody like this?” she said. “Every problem in their life is your fault somehow. They just honestly break you down and make you feel like a terrible person.”

Hess also knew her parents would take her away from the boyfriend if they learned about the violence — and, besides, he was usually apologetic.

There were signs of abuse she couldn’t hide. She stopped eating, lost weight, stopped wearing makeup and became depressed, she said. She also started telling her friends what was happening, but they did not pass the information along to an adult, she said.

Her boyfriend’s mother, a victim of abuse herself, also knew what was occurring and tried to convince Hess to stop dating her son, she said. However, the mother never told Shipman what was taking place, Shipman said.

Eventually, two events brought the abuse to Shipman’s attention. Hess developed a busted lip, and her explanation for the injury was too farfetched, Shipman said. At about the same time, one of her friends finally decided to tell a school counselor what was occurring.

Hess reacted by getting angry at her parents and friend and attempted to run away with her boyfriend, Hess said. Her parents installed surveillance cameras in the hope of keeping her from sneaking out, Shipman said.

“You feel very alone at that point, and (the counseling) just helped me get over it, and realize that this is wrong,” she said.

Domestic Violence Services of Cumberland and Perry Counties stared in 1990 and has helped more than 32,000 men, women and children throughout its history, Davis said. The nonprofit organization also provides a 24-hour emergency shelter and 24-hour hotline, counseling services, medical and legal advocacy, and education about domestic abuse, she said.

Hess encourages anyone dealing with domestic violence to seek help, and said there are safe places that can assist victims in getting out of violent situations.

“You can always do better, and you do not deserve to go through that,” she said. “That person who’s doing that is not a good person.”

Hess and Shipman also encourage anyone who becomes aware of domestic violence to tell someone — and particularly in the case of teenagers, let their parents know.

“If you have a friend in this situation, it is imperative that you go tell someone, even if the friend is going to be mad at you,” Shipman said. “You could save somebody’s life.”

She also encourages parents to compliment teenagers for the things they do well, making it more difficult for putdowns by an abuser to affect their self-esteem.

The Cumberland Perry Vocational Technical School’s cosmetology program holds a fundraising event, such as a cut-a-thon, each month to raise money for a cause chosen by the students, teacher Christine Franklin said.

“In our business, people always have a story behind the chair — we’re a very personalized business, so being able to give back to the community when the community relies on us is important,” Franklin said.

There were nine to 10 people scheduled for haircuts and manicures Wednesday morning, and donations raised allowed the school to give $124.76 to Domestic Violence Services, she said. Last year, the cosmetology program raised $3,112.34 for various causes, she said.

In addition to the money, Davis said she appreciated the event because it was a great way to raise awareness about domestic violence.

Life has improved for Hess in the last three years. She is in a healthy relationship, has a job, and is saving money to purchase a car, Shipman said.

Hess also has a career goal: to work in skin care, helping to improve the self-esteem of her clients.

Are you or someone you know involved in an abusive relationship? The non-profit Domestic Violence Services of Cumberland & Perry Counties is one organization that can help. Here’s some basic information:

CHEERS: To Jayda Hess and her fellow students at Cumberland Perry Area Vocational Technical School. A cut-a-thon raised about $125 for Domesti…

Cumberland Perry Area Vocational Technical School cosmetology student Emilee Raback, back left, is instructed by Rachael Miller, back right, before cutting Chris Boyers, 18, hair during a cut-a-thon at the school.

Janell Baker, 16, receives a manicure at Cumberland Perry Area Vocational Technical School during a cut-a-thon at the school on Thursday, November 13, 2014.