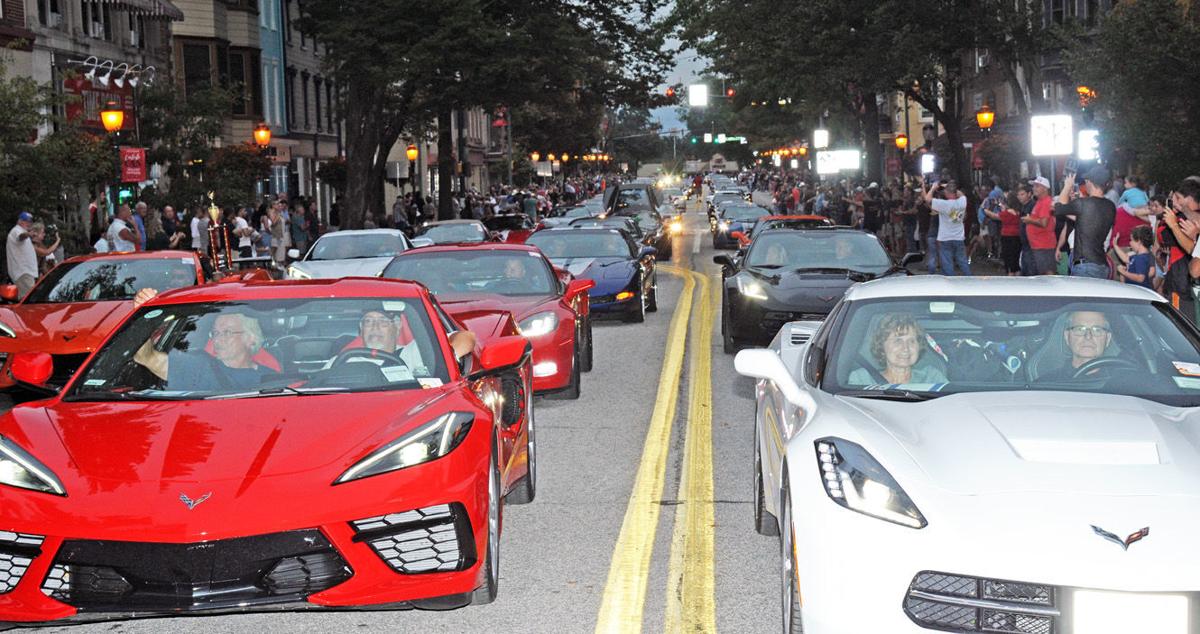 An endless line of more than 450 Corvettes make their way down Hanover Street in Downtown Carlisle Saturday night. 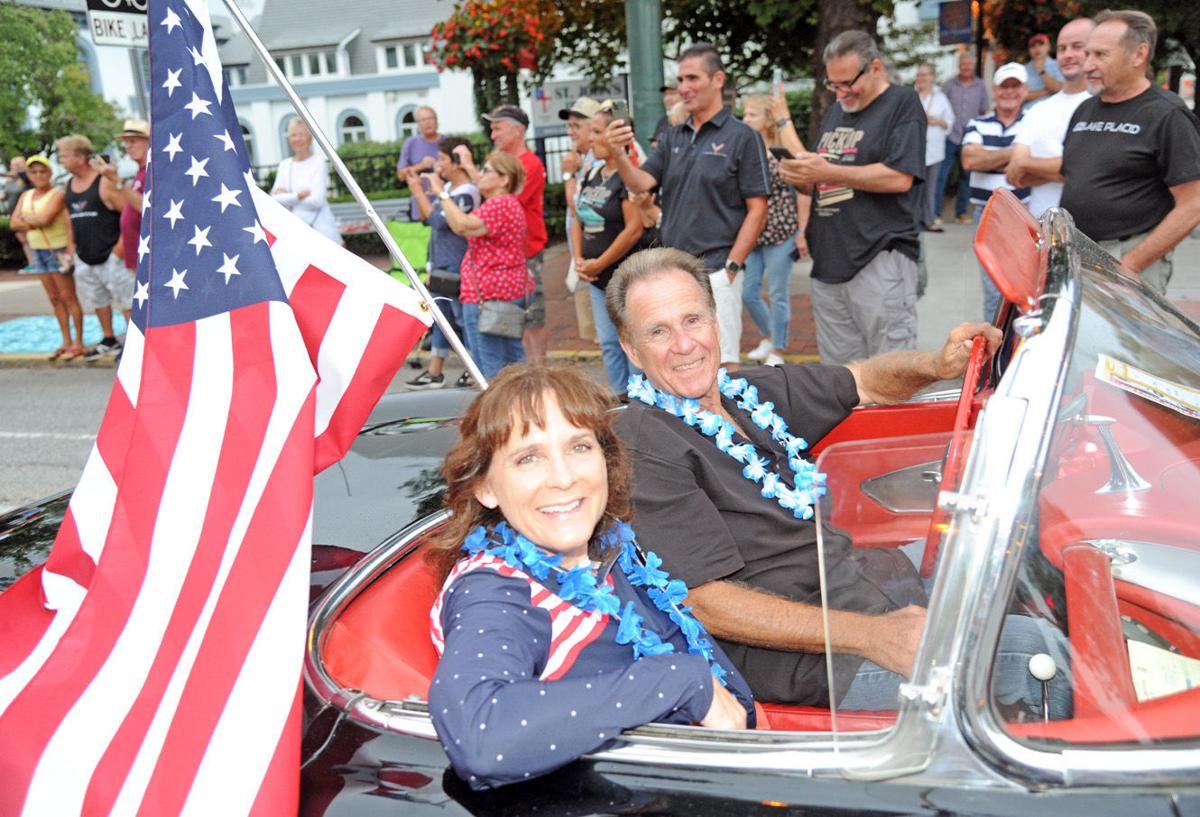 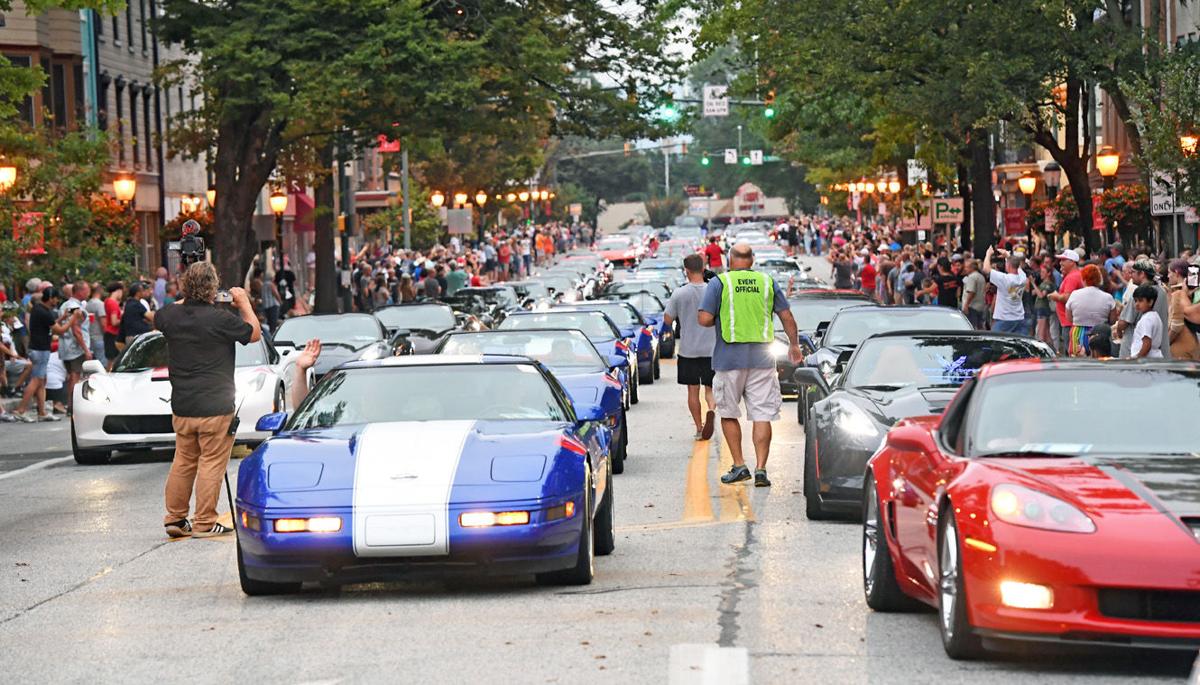 Corvettes filled the streets of downtown Carlisle Saturday for the return of the Carlisle Corvette Parade. 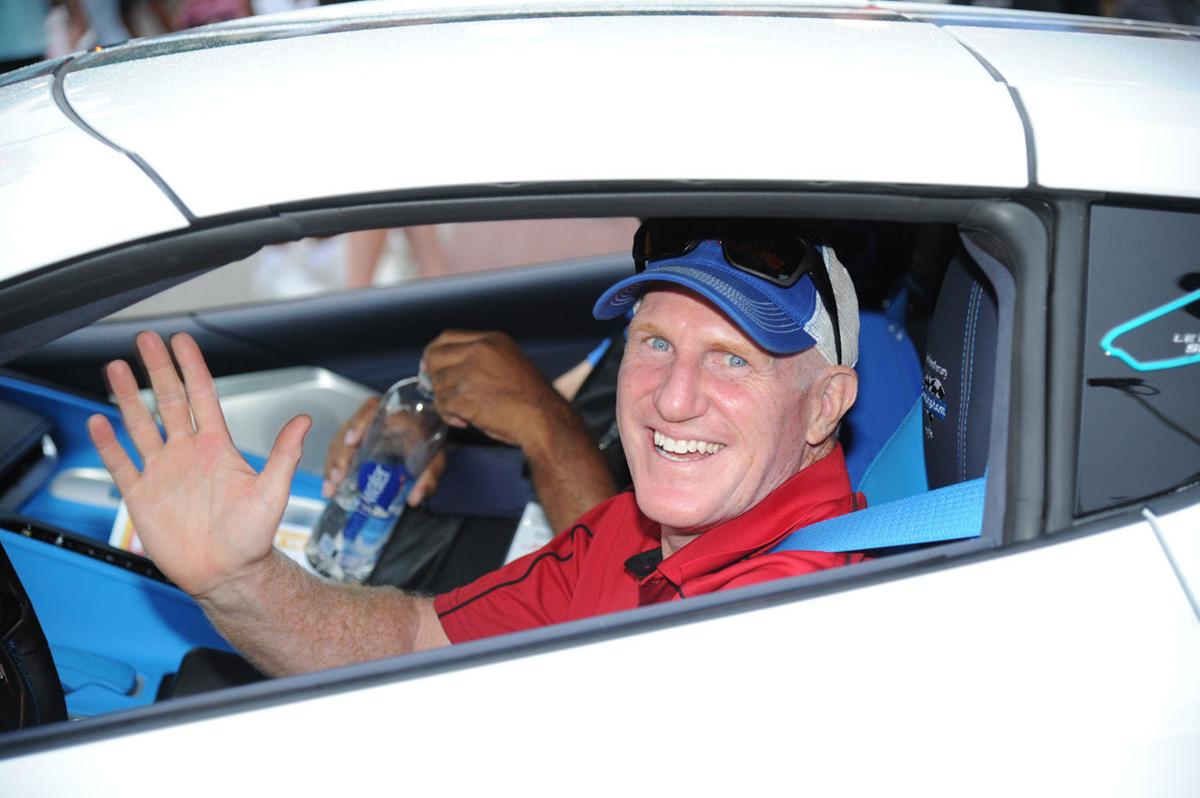 Lance Miller waves to the crowd during the Corvette Parade in downtown Carlisle on Saturday. 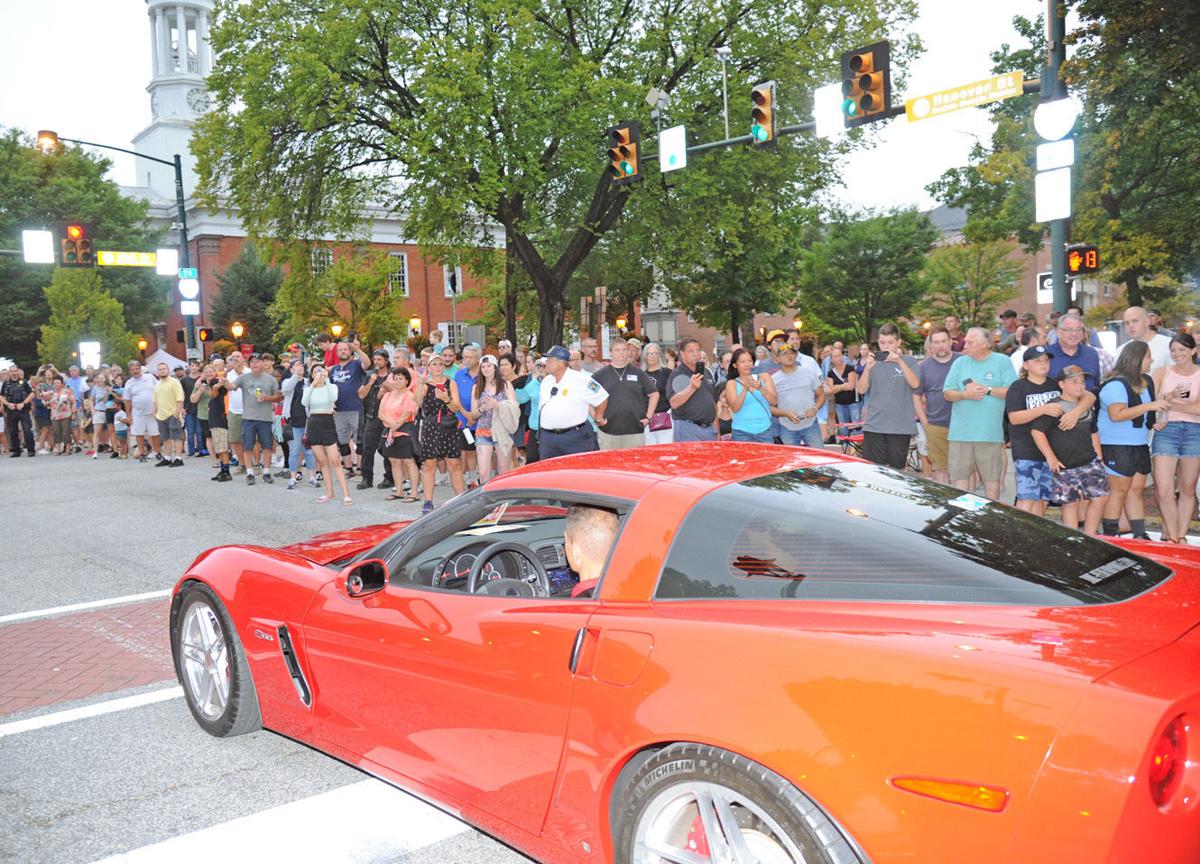 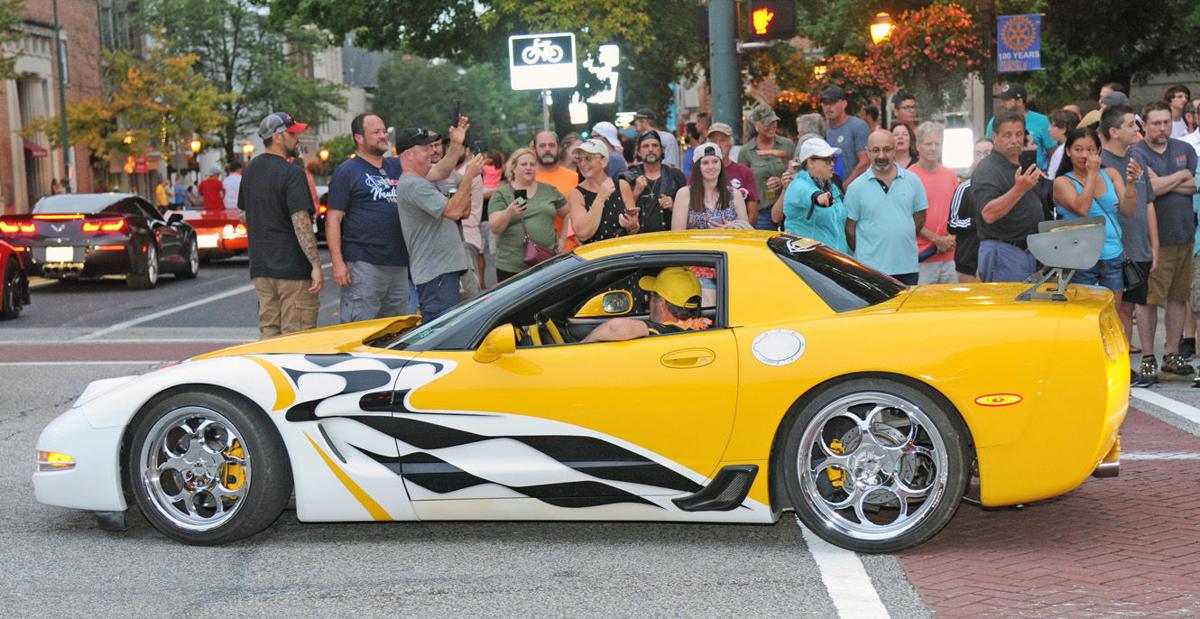 This yellow Corvette catches the eye of onlookers as it makes the turn to West High Street during the Corvette Parade on Saturday. 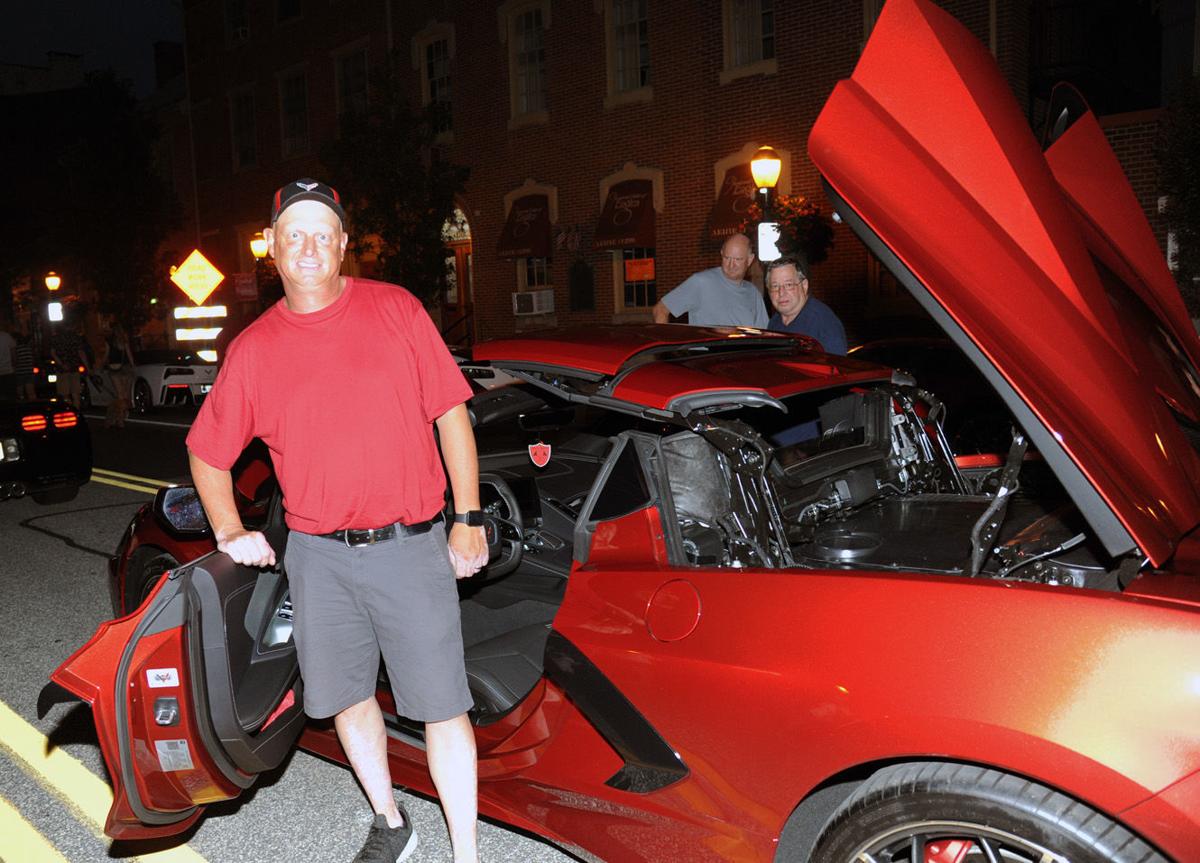 Steven Cook, of Asheboro, N.C., stands by his 2021 C8 Stingray Corvette after the Corvette Parade in downtown Carlisle on Saturday.

After a hiatus in 2020 due to the COVID-19 pandemic, the downtown Chip Miller Memorial Corvette parade roared its way back Saturday night.

The parade, held in conjunction with Carlisle Events’ Corvettes at Carlisle show and organized by the Downtown Carlisle Association, brought Corvette fans downtown to peruse the cars along Carlisle’s closed-to-traffic streets.

Despite rising COVID case counts, most long-time attendees said Saturday’s crowd was as large, or close to it, as pre-pandemic car parades and shows, with enthusiasm for outdoor activities high heading into what may be another difficult fall and winter.

“People are just ready to get out,” said Patty Welliver of Danville, who brought her 2015 Corvette — blue, the color she’s always wanted. She’s also been to other shows, including Myrtle Beach.

“It’s been iffy on some, people are still a little leery. But it’s better than it has been,” Welliver said.

Gene Prusinski, of Old Forge, said he’s been coming to Corvettes at Carlisle for over 20 years, with this year being vastly more populated than last, when the parade was canceled and the swap meet significantly toned down.

“It’s coming back, I think,” said Prusinski, who brought his 2010 Corvette to the show — although his first was a 1979 which he had restored.

The new car, Prusinski said, was a reward to himself after a health scare caused him to abruptly quit smoking.

“Instead of buying a pack of cigarettes, I bought a car,” he said.

Will Conger of Long Island, New York, said he bought his 1981 Corvette in July and spent the last month doing restoration work in preparation for the show.

“I want bragging rights. I don’t want to write someone else a check,” Conger said. “I enjoyed it very much. I just enjoy working on these cars.”

Conger also observed that some of the energy in car shows this year is coming from folks who have spent the last 18 months of the pandemic with few available activities other than cars.

“During COVID, how many people were in their shops because they had nothing else to do?” Conger said, noting that the price of restorable project cars has increased rapidly during the pandemic. “In the years to come, I think there’s going to be a lot of new activity.”

Last year’s downtown parades associated with Carlisle Events’ car shows were cancelled, although the shows themselves at the Carlisle Fairgrounds were allowed to go on after a brief court dispute between Carlisle Events and the Pennsylvania Department of Health over crowd size limitations. Such limits are still listed under the DoH’s COVID-19 mitigation measures, although it is unclear how actively they are being enforced.

Other out-of-state attendees said activity has been picking up elsewhere as well. Scott McKeever of Columbus, Ohio, attended with his 2002 Corvette; after having nearly everything cancelled last year, “today was a really big crowd,” McKeever said.

Dewitt Moyer of Locust Grove, Georgia, also said that most of the car events he regularly attends in Georgia and Kentucky were scaled back in 2020.

“None of the shows really were cancelled, but attendance was down,” said Moyer, who brought his heavily-customized 2017 Corvette. “They’re bouncing back now.”

Douglas Bradford of Ulster County, New York, said he normally goes to 20 to 25 car shows per year with his 1964 Corvette. Last year, it was down to just three.

“Last year was like a ghost town,” Bradford said. “This year is much better. Everybody wants to get out.”

Bradford bought his current Corvette five years ago, after selling the one he owned when he was young to help raise his family.

“I always said before I retired, I was going to get another one,” Bradford said.

Police responded to the scene Oct. 13 for a shots fired report. They determined that a man fired several times at a vehicle from about 10 feet away, with the victim inside the vehicle.

Police said a suspicious male was observed near the building around 5:30 p.m. Sunday.

The township plans to spend $1.65 million this year for improvements and upgrades at Carlisle Airport.

Today's police log includes a child pornography arrest in Shippensburg, a stolen cow in Perry County, and an investigation into dead rats sent through the mail.

A special meeting will be held at 6 p.m. Thursday to interview potential candidates.

An endless line of more than 450 Corvettes make their way down Hanover Street in Downtown Carlisle Saturday night.

Corvettes filled the streets of downtown Carlisle Saturday for the return of the Carlisle Corvette Parade.

Lance Miller waves to the crowd during the Corvette Parade in downtown Carlisle on Saturday.

This yellow Corvette catches the eye of onlookers as it makes the turn to West High Street during the Corvette Parade on Saturday.

Steven Cook, of Asheboro, N.C., stands by his 2021 C8 Stingray Corvette after the Corvette Parade in downtown Carlisle on Saturday.