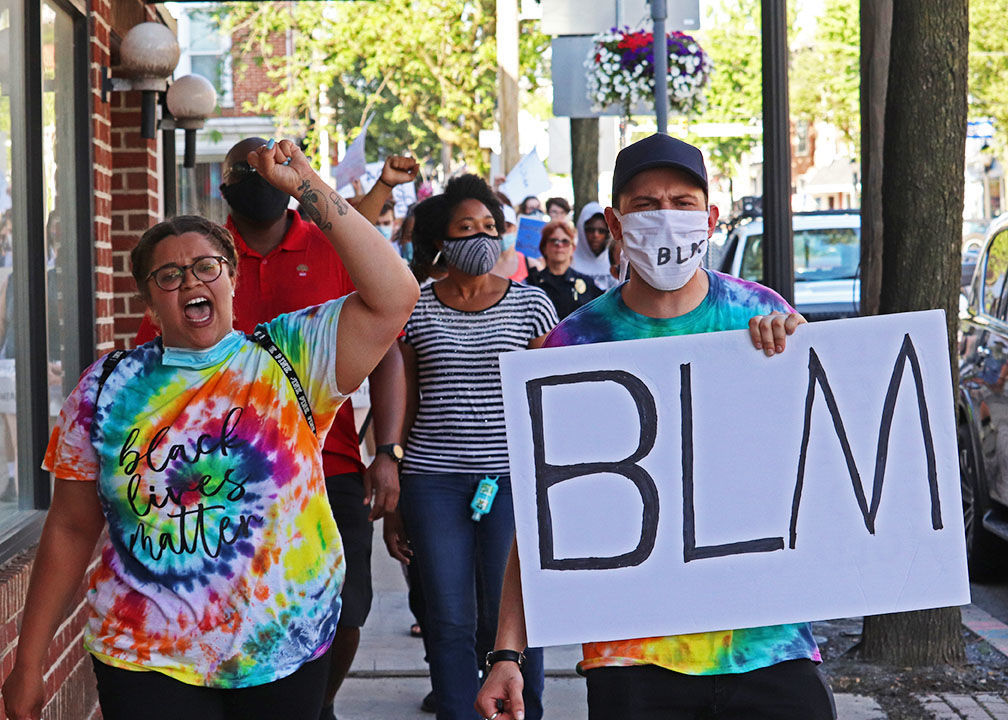 People marched in support of the Black Lives Matter movement in Shippensburg on Tuesday. 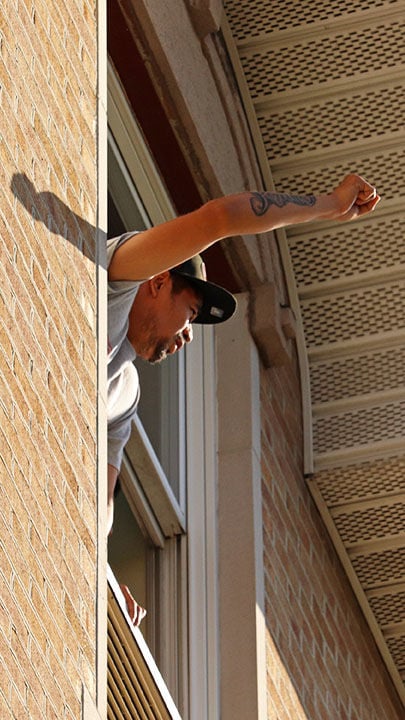 A man expresses support for protesters who marched in Shippensburg in response to the killing of George Floyd in Minnesota. 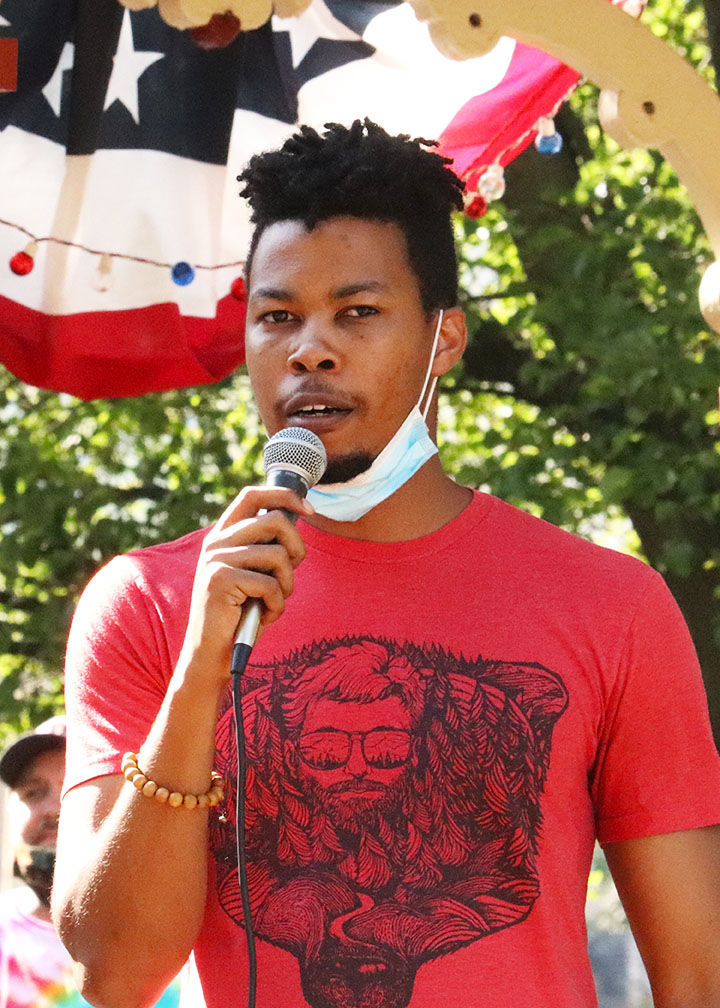 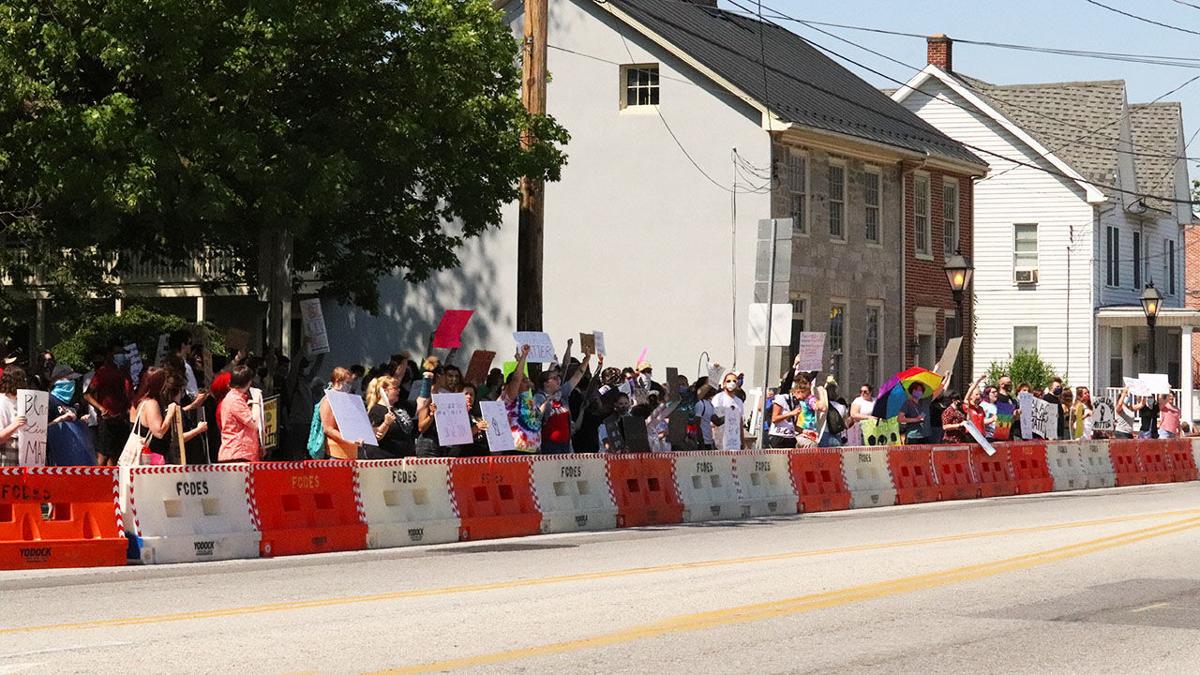 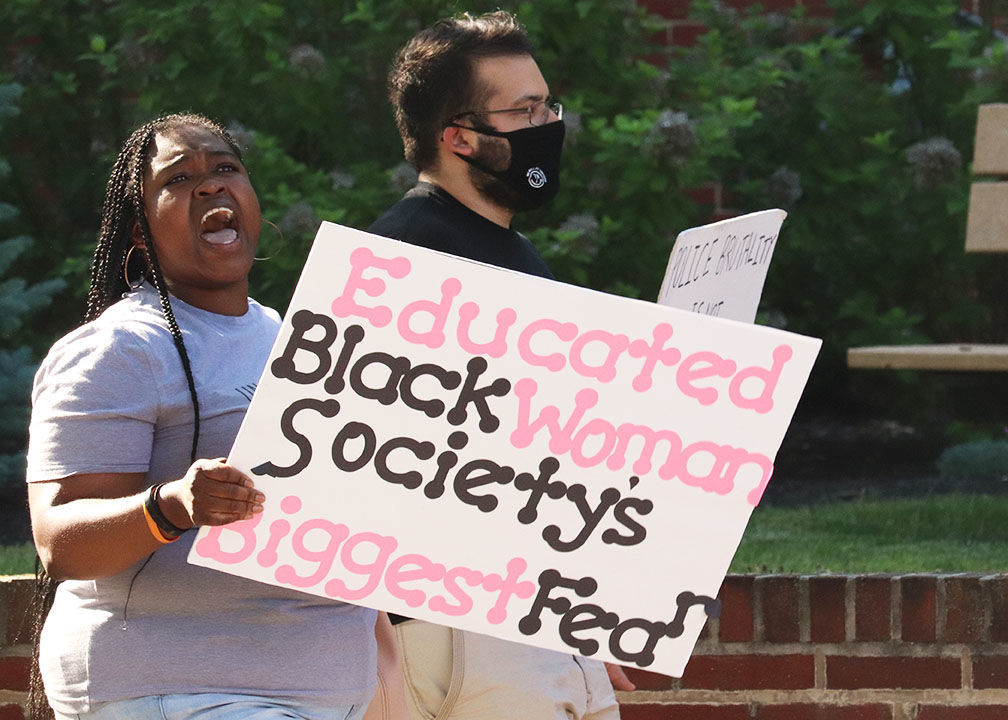 A woman lends her voice the protest march in Shippensburg on Tuesday. 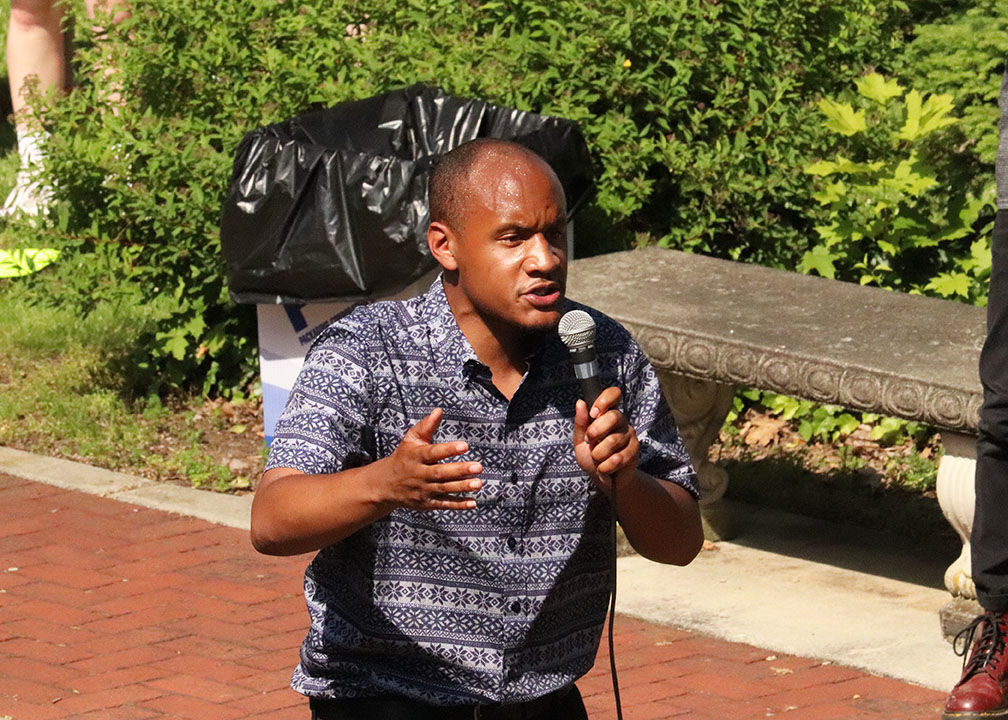 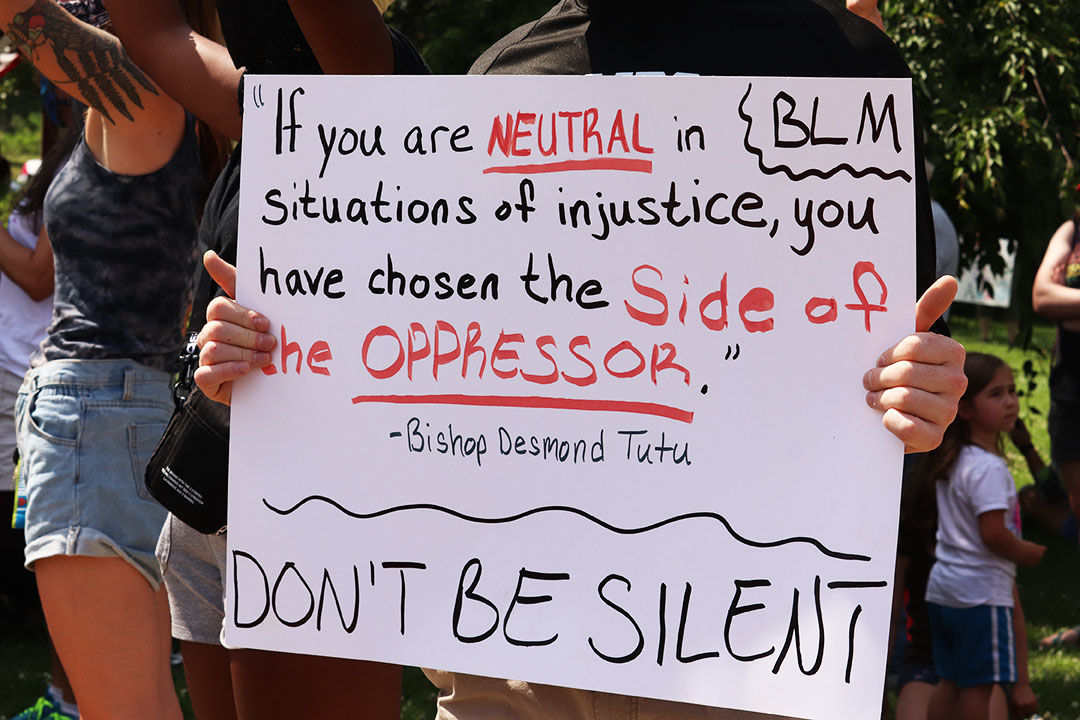 Protesters used signs to air their grievances during the Shippensburg march. 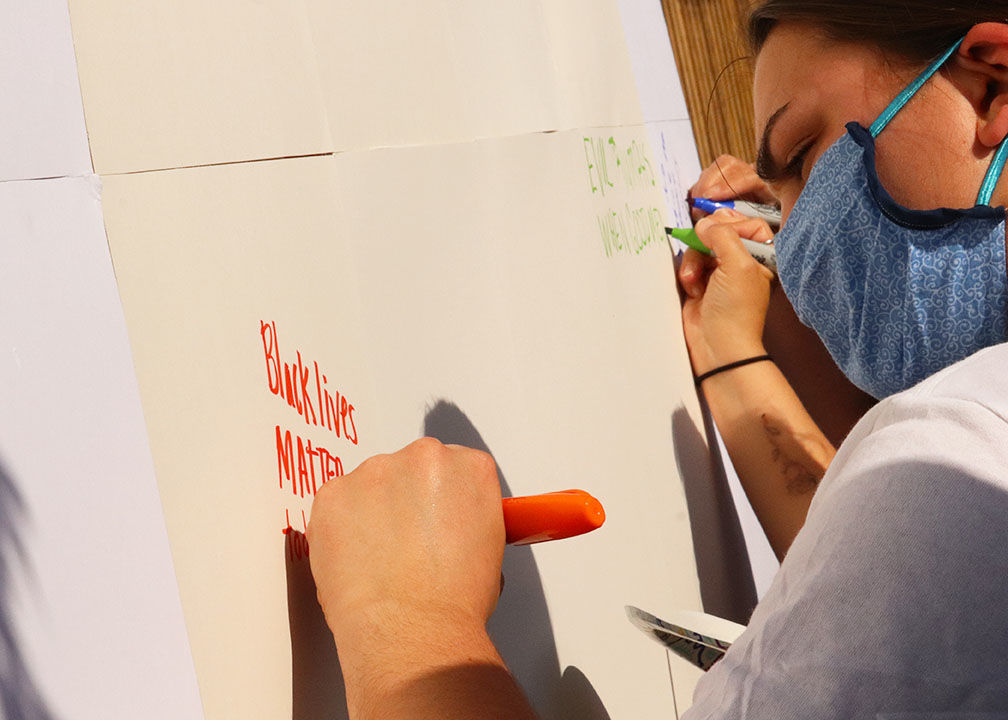 Protesters signed pledges and wrote their names on walls during the Shippensburg march.

Americans should take an honest look at racial injustice in the nation, a group of protesters in Shippensburg were told.

“Sometimes I think it’s easier to pretend, and ignore and act like it’s not happening,” said Diane “Ms. Di” Jefferson, the director of multicultural student affairs at Shippensburg University.

“Then, we don’t have to face the person in the mirror.”

Shippensburg residents collaborated with township police to host a peaceful protest at the gazebo on East King Street Tuesday afternoon. The event featured four black speakers who advocated for the Black Lives Matter movement and offered words of comfort to the crowd in response to the killing of George Floyd. Floyd died after a police officer in Minnesota pressed his knee to Floyd’s neck for 8 minutes and 46 seconds, which has incited protests across the world.

At the beginning of the event, attendees honored Floyd by kneeling in silence for 8 minutes and 46 seconds. Later, protesters marched up the sidewalk toward the abandoned lot at North Prince Street and King Street. Here, protesters signed pledges and wrote their names on walls. No violence broke out.

`He is going to change the world': Funeral held for Floyd

Shippensburg Borough Police Chief Meredith Dominick joined protesters for the march down King Street, while members of the Shippensburg police department escorted the entire group on bikes. Police cruisers blocked off intersections to allow the long line of protesters to cross uninterrupted.

Several speakers expressed support for the Black Lives Matter movement during the event. Cole Goodman, a member of the Pennsylvania Democratic Party executive board and an elected state committee member for Dauphin County who spoke at Saturday’s protest in Carlisle, began the speeches.

“All lives can’t matter until black lives matter,” Goodman repeated throughout the protest.

Goodman said he never experienced police brutality until he protested in Harrisburg on Saturday, May 30. He said he tried to form a peaceful barrier between the police and violent protesters.

“They still pepper-sprayed me. They still beat me,” Goodman said.

Goodman invited Dominick to stand with him as he and the crowd chanted “black lives matter” and the names of several victims of police brutality. Although Dominick stood next to him, she did not chant.

After an interlude, protesters gathered around James Kiama, a Shippensburg High School graduate. Kiama immigrated from Kenya to the United States when he was in middle school.

“I didn’t understand why some people called me the N-word,” Kiama said. “I realized people don’t view me as an immigrant. They view me as black.”

Kiama said black families should not teach their children fear anymore. He said there needs to be understanding between police and African American communities.

“I speak on behalf of [Shippensburg University] President [Laurie] Carter and her entire administration to let you know Ship stands with you. Today and always,” Jirard said.

Before changing positions at the university, Jirard taught criminal justice. She said her students are “good, honorable and decent people.” She quoted Robert Peel, who she said was the father of modern policing.

This means when things go wrong, it requires everyone to be self-reflective of the culture that allowed what happened to happen, Jirard said.

“Sometimes I think it’s easier to pretend, and ignore and act like its not happening,” Jefferson said. “Then, we don’t have to face the person in the mirror.”

Jefferson praised the non-black protesters who said, “I’m going to stand. I’m going to stand for what is right. I’m gonna stand against ignorance. I’m gonna be part of that group of people who dared to say, and aren’t afraid to say ‘black lives matter.’”

Jefferson ended the event by leading the crowd in singing “Ella’s Song: We who believe in freedom cannot rest,” a song written to honor human rights activist Ella Baker. After many protesters left, those who remained began dancing to music in a gridlike square in the park.

This is the second protest that has occurred in Shippensburg. On Tuesday, June 2, around 40 residents gathered to protest Floyd’s death, according to the Shippensburg News-Chronicle. This time, around 200 protesters gathered at any given time. Some left and others joined later in the four-hour-long event.

The protest was organized by Alan Tolbert, Ben Geesaman, Steven Brenize, Mitchell Burrows, Taya Jenkins and Andrew Burdge. They posted a schedule of events and safety guidelines leading up to the protest, and also remained at the event to speak with attendees.

Adams: I am listening. And we will keep listening

Andre Anderson and Timmy Atkinson are perfect examples of black role models in this community. It's my job to cover those like them better, to cover the black community better.

Beyond the Protests: Taking advocacy in the Carlisle area beyond slogans and signs

George Floyd’s death inspired numerous people to take the first steps in working toward racial equality, and activists say there’s more to do beyond the signs and slogans.

Shippensburg University President Laurie Carter announced Monday that the school's fall semester for undergraduates will begin on Aug. 17 and …

On Monday, Shippensburg University announced it would welcome students back to campus this fall while implementing advanced social-distancing …

A group of local activists, including many current or former Mechanicsburg high school students, held a rally in the borough Saturday night wi…

People marched in support of the Black Lives Matter movement in Shippensburg on Tuesday.

A man expresses support for protesters who marched in Shippensburg in response to the killing of George Floyd in Minnesota.

A woman lends her voice the protest march in Shippensburg on Tuesday.

Protesters used signs to air their grievances during the Shippensburg march.

Protesters signed pledges and wrote their names on walls during the Shippensburg march.