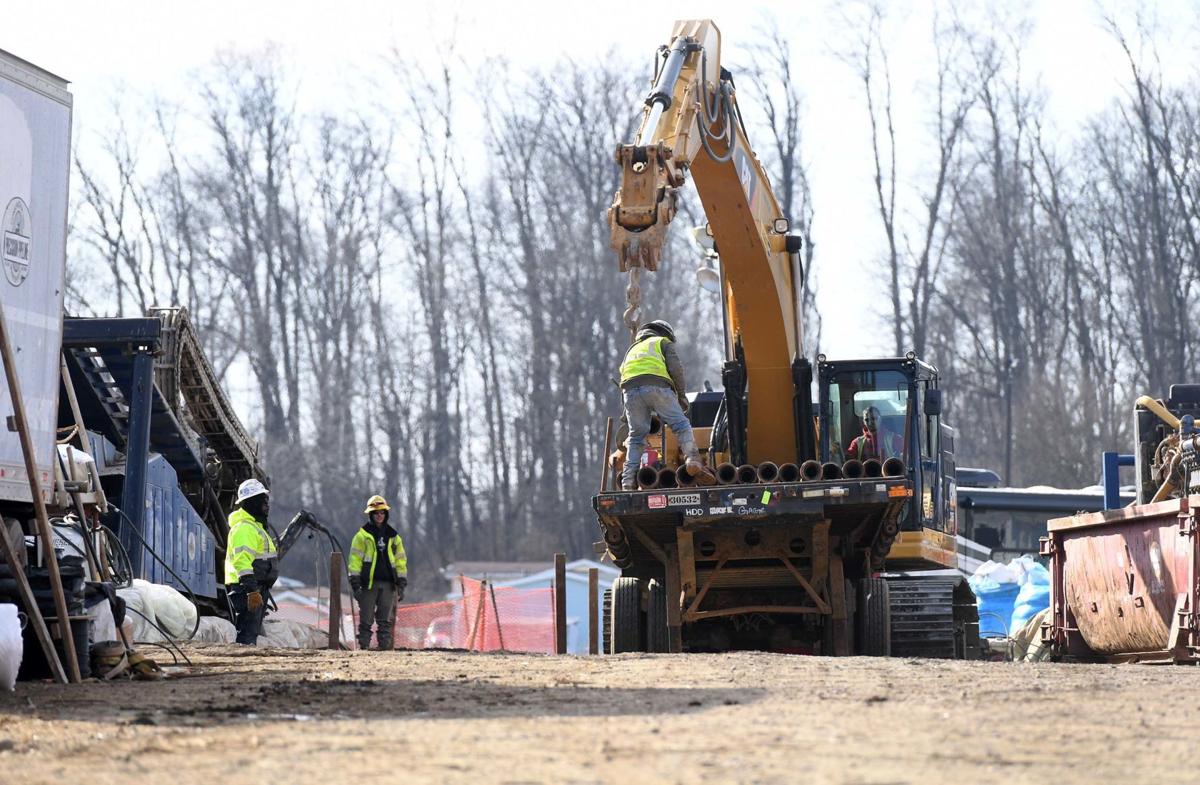 Construction continues on the Sunoco pipeline along Appalachian Drive in Silver Spring Township. 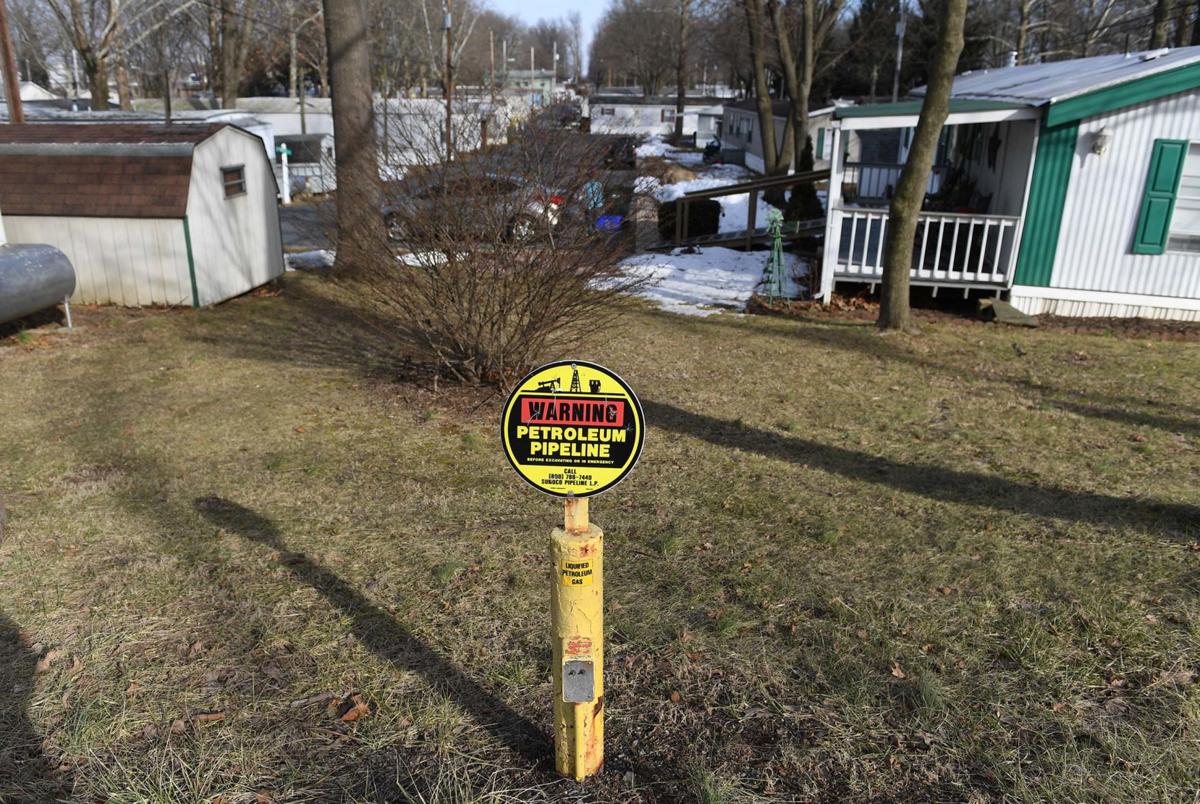 A marker for the Sunoco pipeline sits in front of a mobile home park on Appalachian Drive, Silver Spring Township.

A portion of Appalachian Drive in Silver Spring Township is set to be closed for two months starting in May while Sunoco crews conduct open-trench pipeline installation.

The Silver Spring Township supervisors agreed to Sunoco’s closure and detour request at Wednesday night’s township meeting, conditional upon Sunoco finalizing an agreement with the township’s staff and legal advisers over payment for impact to the township road.

From May 1 to June 26, Appalachian Drive will be closed just south of Route 11 while construction crews cut through the road to lay pipe.

While this method may be slower than using underground directional drilling, it should not cause the problems that occurred last year, when initial work by Sunoco caused a massive sinkhole to collapse part of the road.

“We are resuming construction as of about four weeks ago,” Brad Bonner, a regional construction manager for the pipeline, told the supervisors.

“The board is aware, certainly, of the events in the fall when we had trouble with the directional drilling process at the Appalachian Drive site, and have since requested that we be allowed to open-cut the road to install the 16-inch pipeline,” Bonner said.

All three lines are now slated to carry liquefied gasses, the raw product of hydrofracking in western Pennsylvania, to the Marcus Hook facility near Philadelphia for processing into usable natural gas.

Work in Silver Spring Township last year to install the 20-inch line was fraught with problems after sinkholes began appearing along Appalachian Drive, eventually causing the road to be closed during the summer and into the fall when a sinkhole opened in the road.

“The boring of that pipeline destroyed a well, created a sinkhole, and closed Appalachian Drive for three and a half months,” said Rob Sunday, who owns a home and farmland in the affected area.

Detouring Appalachian Drive, by routing drivers along Kost, Biddle and Old Stonehouse roads, increases travel time by eight to 10 minutes, Sunday said, a concern in case of a fire or medical emergency.

Appalachian Drive is expected to be open, for emergency vehicles only, in the evenings after Sunoco is done working this coming May and June.

Water service for many residents has been interrupted, and in some cases new wells had to be dug. Some residents still have temporary water tankers in their yards, Sunday said. Now, it appears residents will have to go through the ordeal again.

“We’ve already had to go back with our attorney and work out a new easement, access, worksite area, [and] driveway area into the headlands of our field,” Sunday said.

The process has also been particularly hard on residents of Leiby’s Manufactured Home Community, which sits just above Sunday’s field where the pipeline crosses the road. The mobile homes are particularly vulnerable to vibration from the pipeline work.

“Every time they would work across the street my whole house would shake,” said Tanya Deeny, who owns a mobile home directly across from the work site.

The vibration cracked her heat-exchanger, Deeny said, causing her to eventually have to replace her entire furnace system. A neighbor eventually moved out after cabinets were rattled off their mountings and cracks began to appear in the walls of mobile homes, Deeny said.

Sunoco’s assessment claimed that the damage was not due to drilling vibration, Deeny said, a finding she disputes but has little recourse to correct.

“It’s just a matter of having all this money to get a lawyer and take them to civil court when I’m already out $3,200 to replace my furnace,” Deeny said.

Pipeline construction has racked up dozens of violations and fines in Cumberland County alone, typically due to so-called “inadvertent returns” in which mud and drilling fluid leak from the path of the directional boring, contaminating aquifers, opening up holes in the bedrock, and causing damage to streams and wetlands.

But for the upcoming work in Silver Spring Township, the Mariner IIX line will be placed by cutting an open trench 10 feet wide and 10 feet deep, by Bonner’s estimation.

“It’s going to be a very slow operation,” he said, given the density of limestone formations in the soil. But digging from the top, rather than drilling horizontally underground, should eliminate the risk of inadvertent returns.

Wolf Brewing Co. is now officially open in the Market Square at the Legacy Park development.

The 1972 Mustang Mach 1 will be part of a display celebrating the anniversary of the “Big Horse Mustang,” featuring 1971-1973 Mustangs.

Construction continues on the Sunoco pipeline along Appalachian Drive in Silver Spring Township.

A marker for the Sunoco pipeline sits in front of a mobile home park on Appalachian Drive, Silver Spring Township.