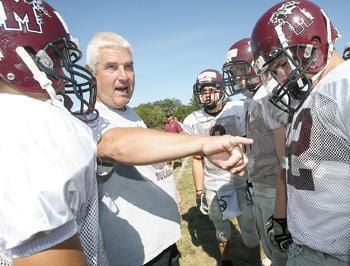 The Mechanicsburg School Board has approved naming a new field house after Rich Lichtel.

The official name of the new field house planned for the John H. Frederick Field at Soldiers and Sailors Memorial Park in Mechanicsburg will honor the memory of a community figure.

On Tuesday night, the Mechanicsburg School Board approved naming it the Rich Lichtel Field House as proposed by the Wildcat Foundation.

Lichtel served as Mechanicsburg’s head football coach for 25 years until his death at 60 in 2007. The Rich Lichtel Fund, a project of the Foundation for Enhancing Communities, provided a donation that began the Wildcat Foundation’s Building the Future Together capital campaign in 2018 for the field house and other renovations at the football field.

“Rich was a longtime figure in our community,” Superintendent Mark Leidy said Tuesday. “He taught students about life and not just about football. He had a positive impact on many.”

The Wildcat Foundation, led by executive director Holly Rider Laufer, began its capital campaign in 2018 for constructing the 120-foot by 36-foot field house that will accommodate two teams of up to 60 players each. New team rooms will include showers, restrooms, lockers, bench seating and a training room. Existing field memorials will be relocated to a natural walkway, and a hall of fame is planned between the team rooms.

Plans include recladding, repurposing and updating existing team rooms and public restrooms to include more restrooms, an officials’ locker room and storage. An existing concession stand will be updated, while the field’s original entrance archway will be repurposed over new ticket booths.

Latest figures on the Wildcat Foundation’s website indicate that the capital campaign has collected $1,653,150 of its $2.5 million goal. Laufer said on Tuesday the foundation now feels “comfortable” enough to prepare for construction later this year.

Leidy said the foundation is contacting general contractors for the project, with construction possibly starting “mid-March or sooner.” The project is slated for completion by fall.

The Wildcat Foundation is accepting donations for its Building the Future Together campaign for the new field house. Donations are accepted at www.wildcatfoundation.org or by calling 717-691-4505.

Also on Tuesday, the Mechanicsburg School Board gave the district a go-ahead to advertise for contractor bids for renovations and expansions at Broad Street Elementary School.

Plans at Broad Street are to build a single-story addition comprising four regular classrooms, one open collaborative-style classroom, dedicated rooms for art and music, and a new media center. A small addition to the school’s existing kitchen also is planned, as well as renovations to the existing media center. A site reconfiguration is also in the works to improve and fully separate the school’s bus and parent drop-off areas. Project costs are estimated at $13.2 million.

The school board is expected to award contracts in March. Construction could begin around April 1, 2020, with completion in July 2021.

Finally, Maureen Ross of Operation Wildcat was presented with a Jefferson Award for Outstanding Community Service on Tuesday night. Ross is a founding member of the organization.

Ross said Operation Wildcat comprises “a ton of unsung heroes” and that she was accepting the award to give the organization “more notoriety.”

Originally set to be complete by the start of fall, Mechanicsburg's new Rich Lichtel Field House is expected to be done by the end of the year.

Mechanicsburg Area School Board to consider its own membership policy

In 2017 and 2019, the Pennsylvania General Assembly passed two acts amending the state school code that require school board directors to complete training programs, direct who can provide the training, and detail how districts and school directors would be held accountable for this.

The Mechanicsburg School Board has approved naming a new field house after Rich Lichtel.