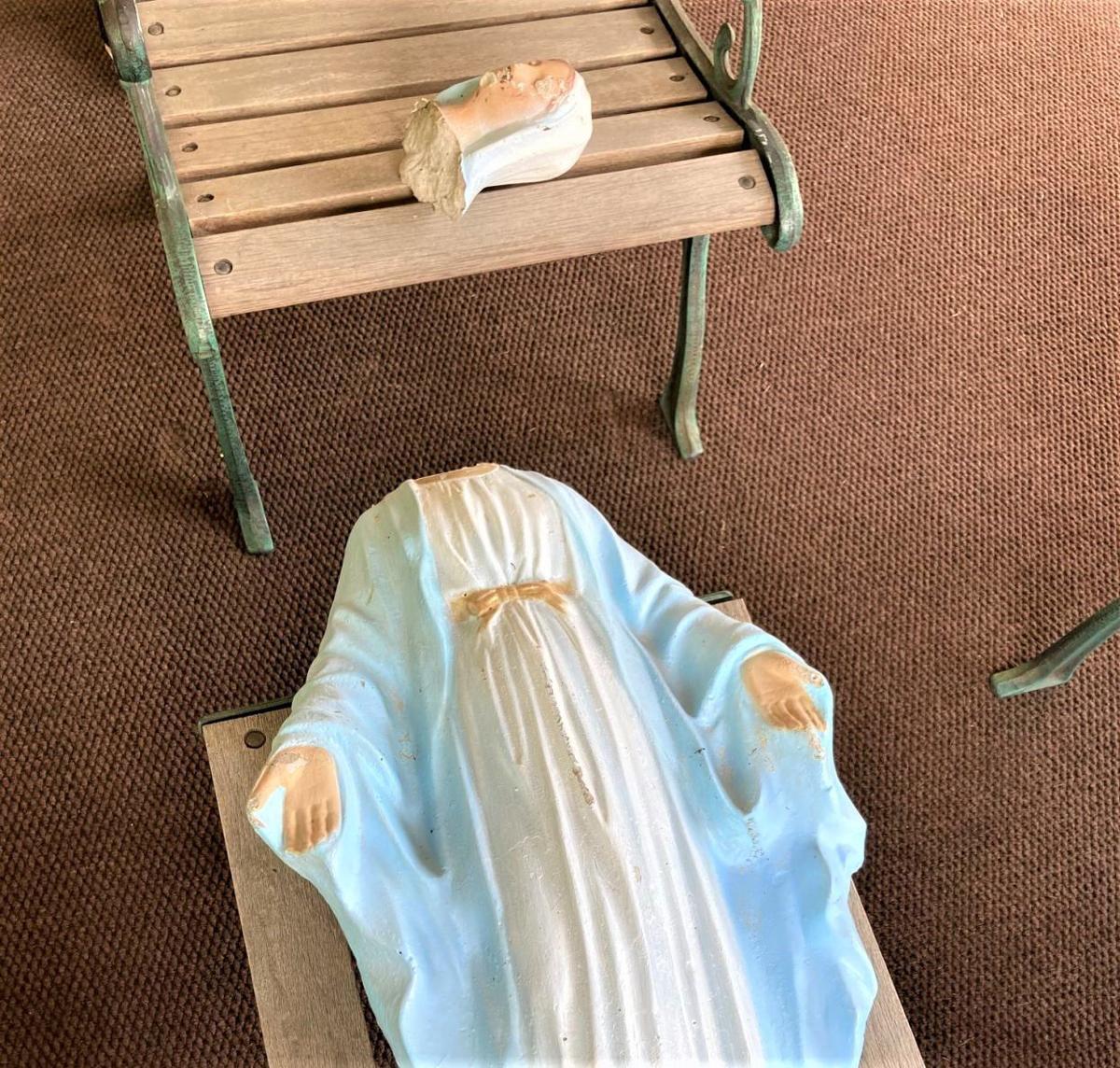 Vandals broke the head off the statue of Mary after it was taken from its place in a garden at the church on East Pomfret Street. 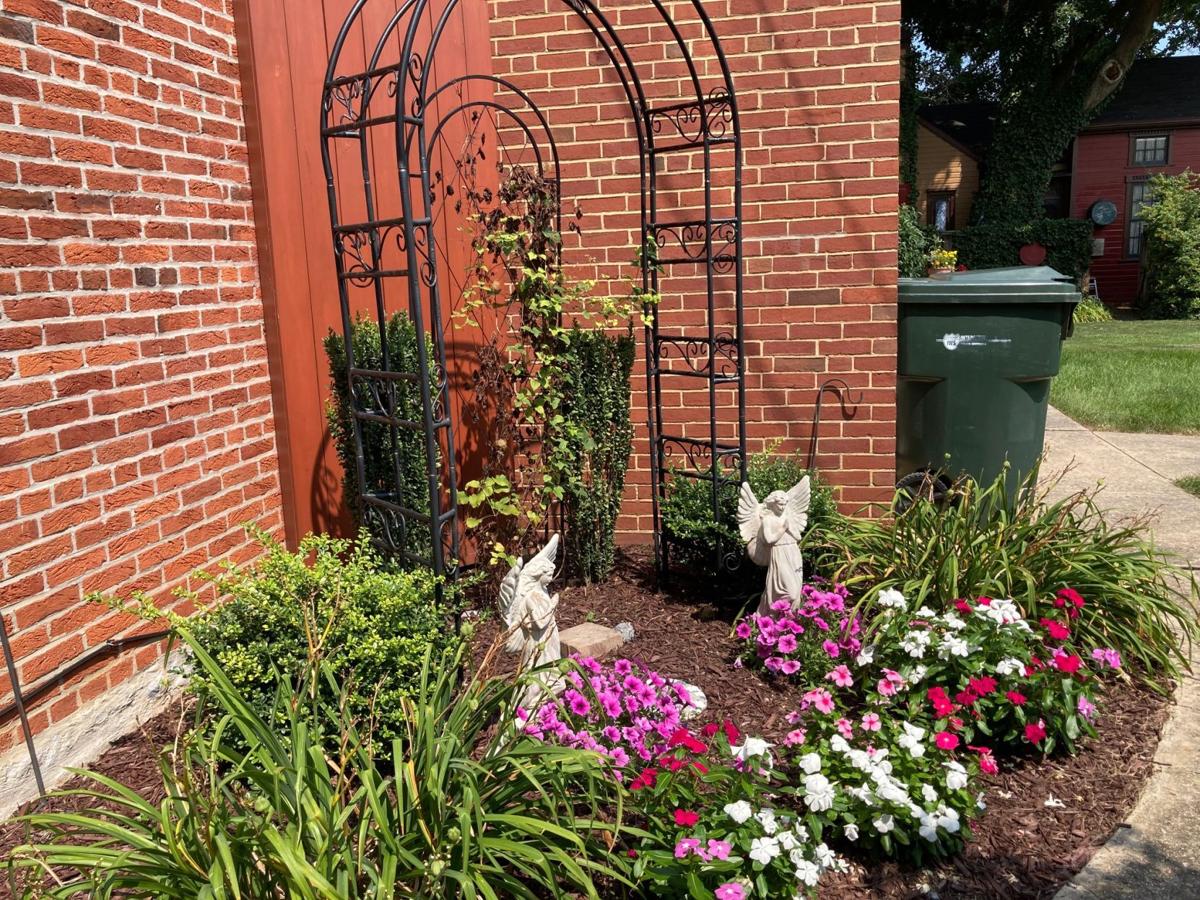 St. Patrick Parish's statue of Mary used to sit under the arch in this garden dedicated to a former deacon. 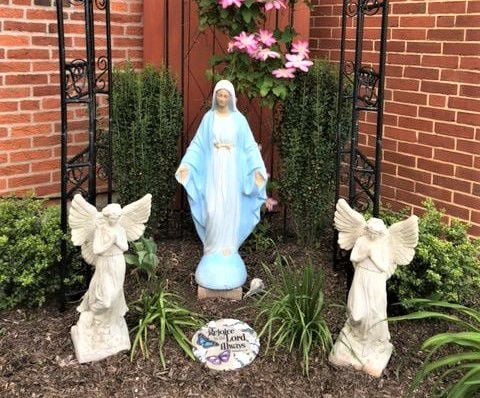 A statue of Mary, shown here in an earlier photo, was taken from its place in a garden and vandalized recently.

Part of the mystery of the missing Blessed Mother Mary has been solved, but one question remains.

A neighbor of St. Patrick Church at 152 E. Pomfret St. in Carlisle noticed the statue was missing last week.

According to the Carlisle Police Department, the statue was taken between July 19 and July 21 by someone who used a cart to remove the statue of Mary from the church garden.

On Sunday, a neighbor mowing his grass found the statue under some hedges by the cemetery wall near the church.

“Unfortunately, someone broke the head off of her and left both pieces there. They were both kind of shoved under the hedges,” said Star Wiskeman, parish administrator, in an email to The Sentinel.

Though the broken statue has been recovered, the question of who did it remains.

Police have asked that anyone with information call 717-243-5252 or submit a tip through the Crimewatch website.

Wiskeman said this is not the first time this summer the statue was targeted by thieves. On July 13, the statue was found behind the parish office. It looked like someone had tried to take it, but found it was too heavy.

“It was placed back in its original spot only to have it taken again a week later and broken,” she said.

The attempted theft and subsequent vandalism is all the more disturbing to parishioners because the statue was taken from a garden dedicated to Gerald Kole, a deacon who suffered a heart attack and died at the site while tending the garden, near the anniversary of his death on July 15, 2002.

It has not been decided whether the statue will be repaired or replaced.

A food truck festival conceived as an alternative fundraising option for Project SHARE during the pandemic will return Sunday, though in a new location to help expand the options.

Students from Dickinson and Widener will conduct an informal policy analysis to look at past approaches to the use of single-use plastics and their results.

The fiber optic network, Glo Fiber, will offer ultra-high speed bandwidth with symmetric upload and download capacity for internet customers that can be bundled with cable television and telephone service.

Hope Station will keep its nonprofit status as well as its staff, name, logo, branding and key initiatives with its three staff members continuing to operate out of the office in Memorial Park.

Vandals broke the head off the statue of Mary after it was taken from its place in a garden at the church on East Pomfret Street.

St. Patrick Parish's statue of Mary used to sit under the arch in this garden dedicated to a former deacon.

A statue of Mary, shown here in an earlier photo, was taken from its place in a garden and vandalized recently.