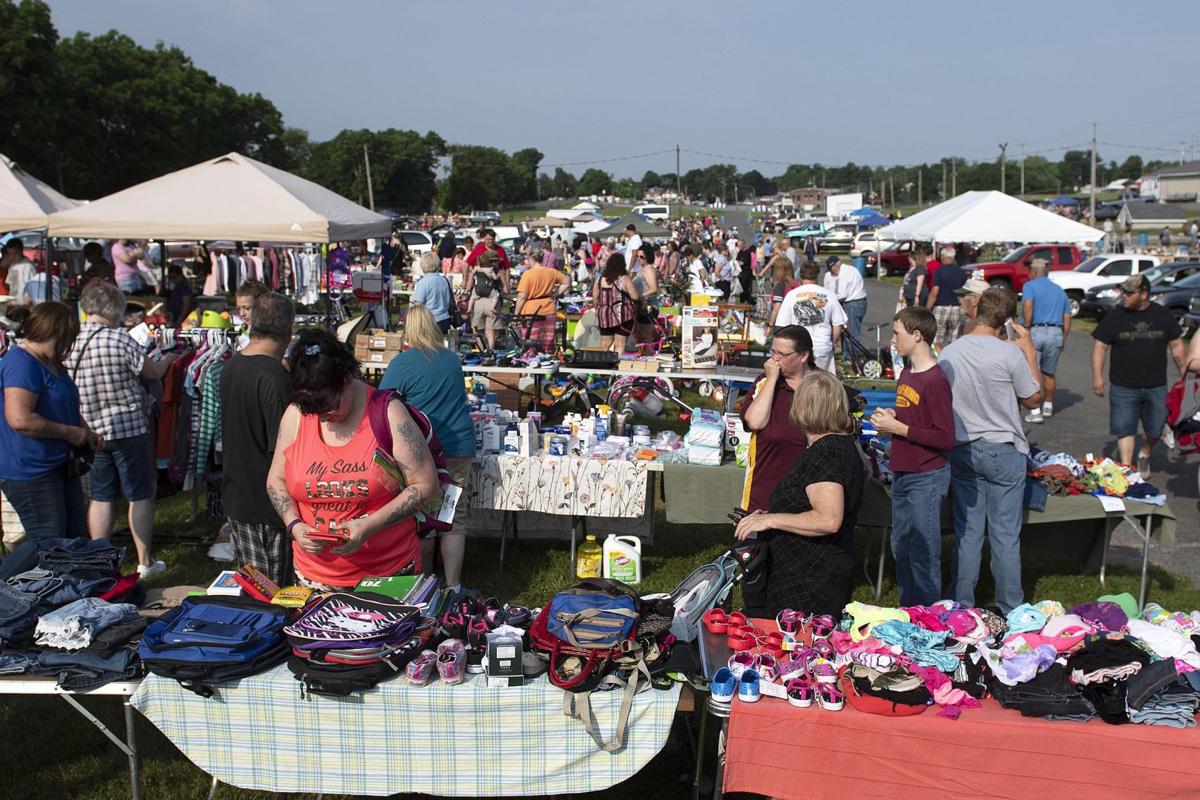 Hundreds of shoppers browse for bargains at United Way's U-Turn Sale at the Carlisle Fairgrounds in June 2018. The 2020 sale has been canceled because of the COVID-19 pandemic. 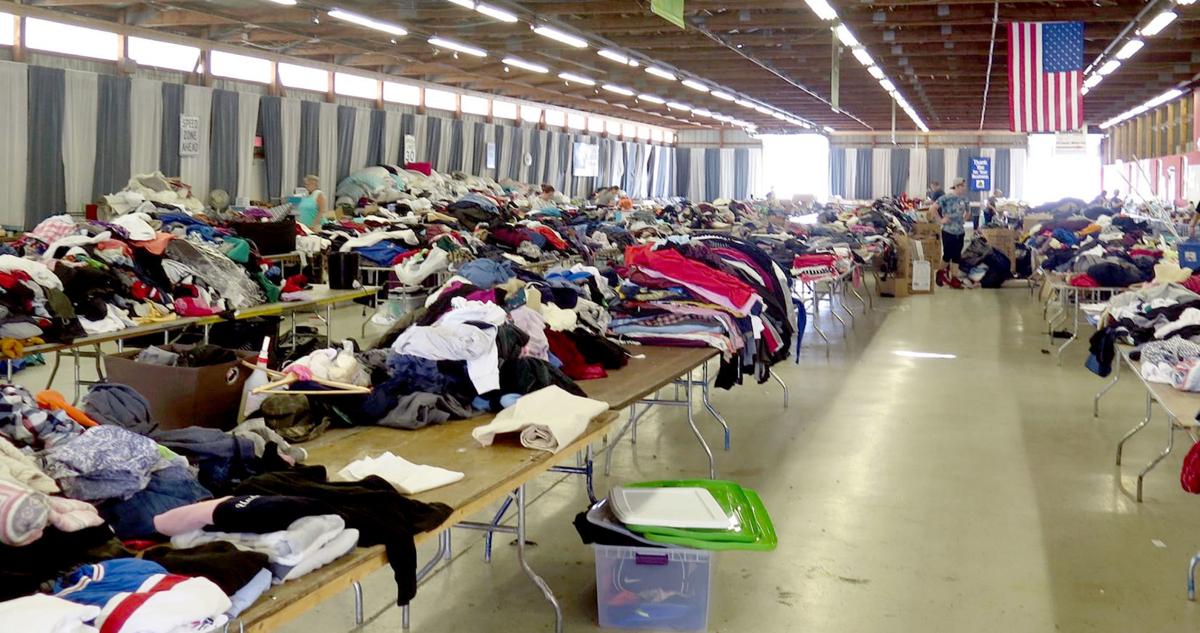 The United Way collected 22 tons of material for the U-Turn sale in 2019.

U-Turn, billed as “Carlisle’s Largest Yard Sale,” is the epitome of a win-win situation.

Dickinson College students can unload unwanted stuff at the end of the school year without sending it to a landfill. The United Way of Carlisle and Cumberland County raises funds to help offset administrative costs at the organization. Shoppers from Carlisle and a fairly sizable area surrounding the borough get deals on quality goods.

This year, in light of the coronavirus pandemic, everyone is feeling the loss.

U-Turn had been scheduled for June 13, said Lucy Zander, executive director of the local United Way.

The organization knew early on it would not have merchandise from Dickinson College to sell so the next question was whether to hold the yard sale portion of the event in which vendor spaces are sold to those who want to bring their own stuff to sell.

The United Way offered refunds to those who already reserved yard sale spaces in addition to giving them the option to turn the reservation payment into a donation or hold their space for the 2021 edition of the sale.

It wasn’t an easy call, but Zander said the United Way decided to cancel the event in light of the expected thousands that traditionally attend.

“It just didn’t feel like the right thing to do,” she said.

“This has been a huge sustainability project for us over the years because we know that a lot of the stuff is going to a good place,” said Lindsey Lyons, assistant director of the Center for Sustainability Education at Dickinson College.

Initially, Dickinson College extended its spring break in response to the spread of COVID-19 in the country before making a decision in mid-March to cancel in-person classes for the remainder of the school year.

While some students were able to move out quickly, others had to send the college a list of items to ship home. Students also had the option to return to campus recently to pick up items, but they had to schedule a time and were limited to one other person who could help them move, Lyons said.

Though the numbers haven’t been totaled yet, Lyons suspects the amount of leftover items going to a landfill this year will be through the roof.

“People, when they’re moving out quickly, aren’t focused on donations or recycling things quite as much as they normally would be, so they put these huge Dumpsters out which are destined for the landfill,” Lyons said.

Lyons said her colleagues in residence life are collecting and storing things for U-Turn for next year, but there’s no way to do it to the scale it has been done in the past because there’s not enough staff on campus to make it work.

“I think it will be a roomful versus three tractor trailers full,” Lyons said.

Last year, the college donated 22 tons of items to the U-Turn sale.

“There’s already so many losses of revenue, and this is another chunk that we’re unable to provide this year to help those community organizations in need,” she said. “It’s hard to watch the waste pile up. It’s hard to watch the few people on campus work so hard to do their best and still know that these community organizations aren’t getting the money.”

A longtime advocate of the United Way, Dottie Warner, Dickinson College’s director of event planning at the Holland Union Building, is normally in charge of arranging for people in her department to drive the trucks as volunteers loaded the donated items. By now, those trucks would have left the campus and items would now be in the process of being sorted and organized.

“U-Turn was always a win-win for everybody. We didn’t have to send things to the landfill or try to get rid of things. People in town got great deals on things that the students didn’t have to take home. United Way got the profit,” Warner said.

“It’s a real time of uncertainty for everyone and everything,” she said.

The bulk of the money raised through the U-Turn sale comes from items donated by college students. When combined with the loss of the Glee Competition, which had to be canceled in April, the United Way is looking at a combined loss of about $45,000, Zander said.

The United Way put its fundraising focus on the Carlisle Area Emergency Response fund because it knew many people in the community would need assistance who never needed it before.

“That was the right thing to do to help the community,” Zander said.

That fund has raised about $107,000 of which $45,000 has been paid out to 15 organizations including organizations like Cumberland-Goodwill EMS and New Kingstown Fire Company, which normally would not receive funding from the United Way, Zander said.

The losses from the Glee Competition and U-Turn are being offset by a Paycheck Protection Program loan the organization received from Orrstown Bank. Zander said Brenda Kaufman, the United Way’s finance director, is paying close attention to the program requirement to make certain the loan is forgiven.

“If that happens, that will essentially make up for that loss,” Zander said.

The United Way is also working on plans for its annual campaign this fall, which will likely take on a new look as a result of the pandemic, Zander said.

One thing, though, is as certain as something can be these days. U-Turn will return in 2021. “Mark your calendar for next year and, if you have space to store your things, keep them until next year,” Warner said.

Though Cumberland County is not yet slated to move from the yellow phase to the green phase, new guidelines provided Wednesday afternoon by th…

Hundreds of shoppers browse for bargains at United Way's U-Turn Sale at the Carlisle Fairgrounds in June 2018. The 2020 sale has been canceled because of the COVID-19 pandemic.

The United Way collected 22 tons of material for the U-Turn sale in 2019.