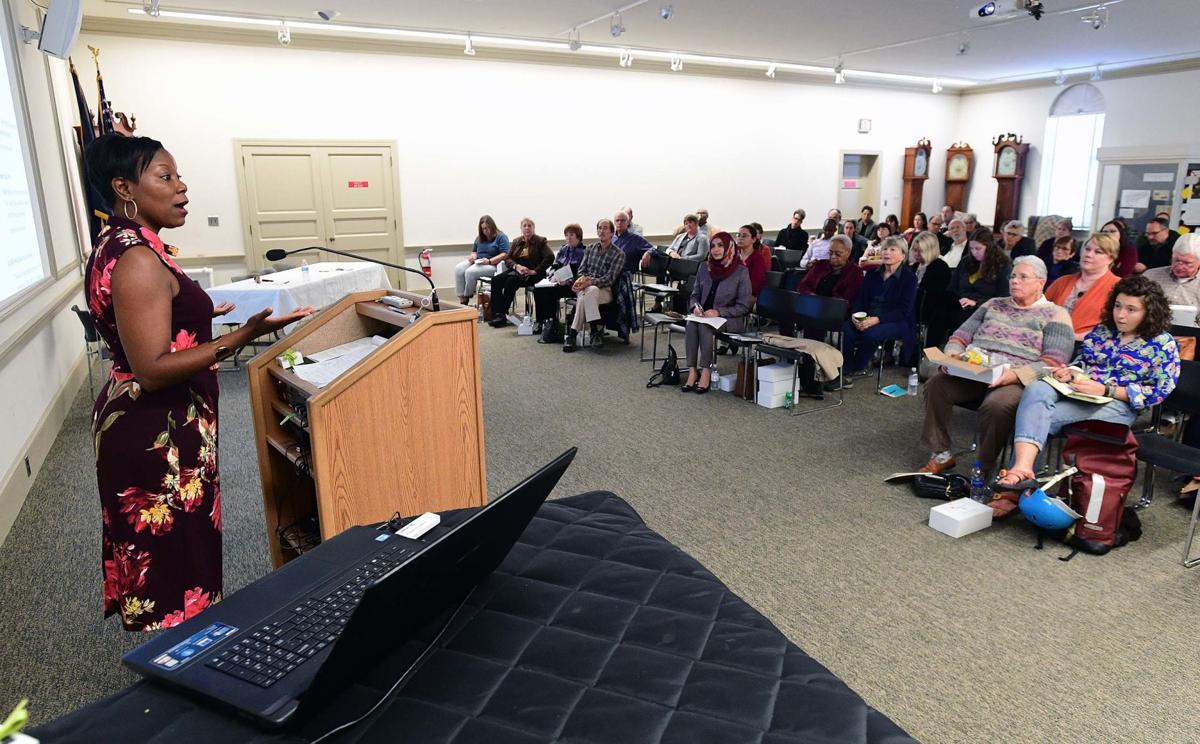 Tameka Hatcher of the Pennsylvania Human Relations Commission says the commission has seen an uptick in the reporting of racially motivated incidents in the schools all over the state. 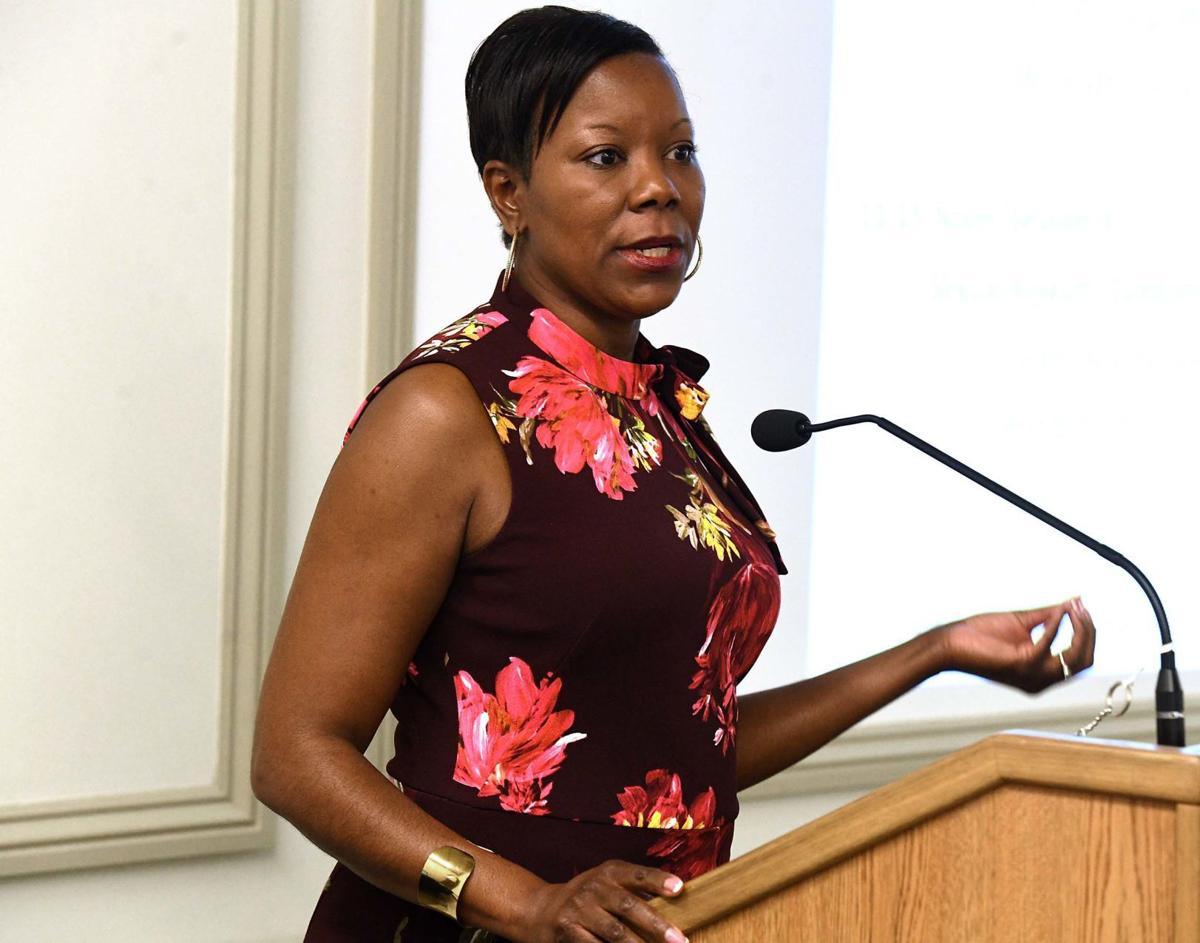 Tameka Hatcher of the Pennsylvania Human Relations Commission talks about how social justice issues intertwine on Tuesday afternoon at the Cumberland County Historical Society during the Building Civil Discourse in the Susquehanna Valley social justice forum. 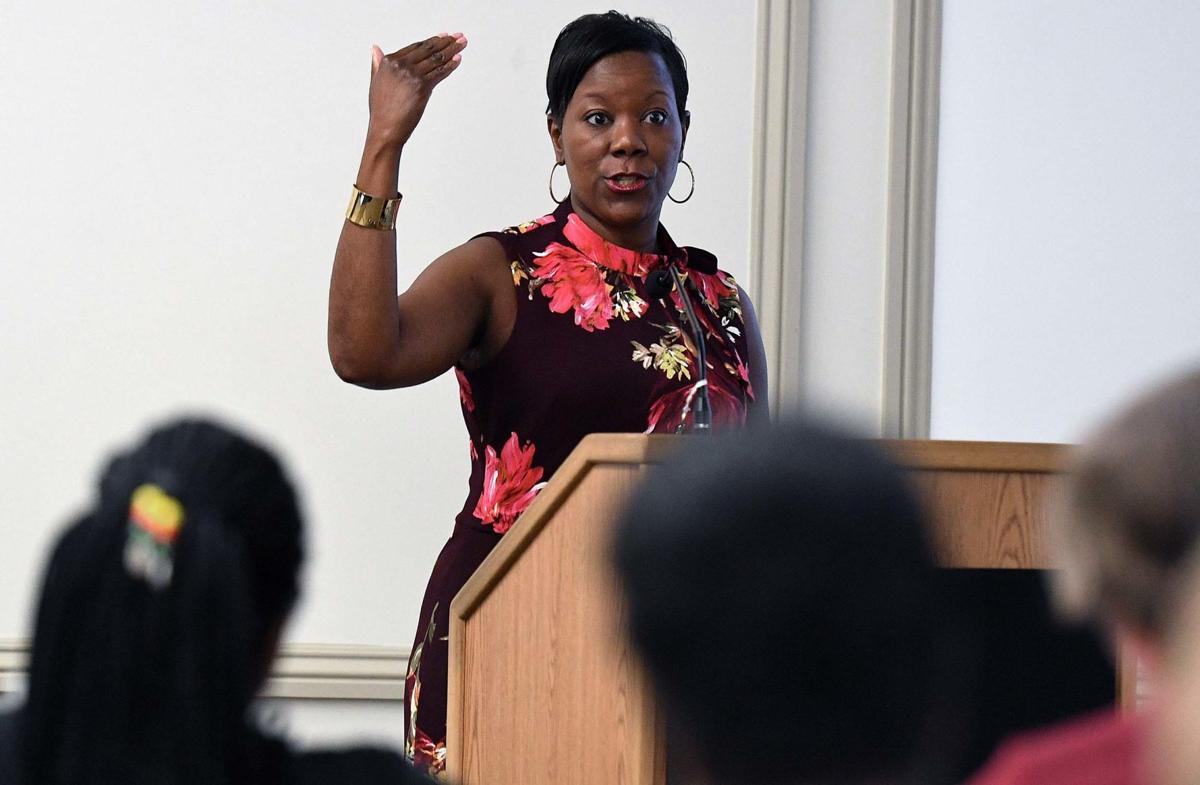 Tameka Hatcher of the Pennsylvania Human Relations Commission spoke at the Building Civil Discourse in the Susquehanna Valley social justice forum on Tuesday.

Panel discussions at a Tuesday social justice forum ranged from housing to history, immigration to education and more.

The conversations rising out of those panels were challenging, but necessary, said Chad Lassiter, executive director of the Pennsylvania Human Relations Commission.

Held at the Cumberland County Historical Society in Carlisle, the social justice forum was sponsored by the Human Relations Commission and the Historical Society’s Community Heart & Soul Project in Greater Carlisle. About 75 people attended to hear speakers from Shippensburg University, HACC, Safe Harbour, YWCA Carlisle and UPMC Pinnacle, among other organizations.

Tameka Hatcher of the Human Relations Commission thanked those who came to the forum because they had embarked on the “serious work” of unraveling the system of oppression that put people in different classes based on race, orientation and ability.

“When we know better, we can do better,” she said.

There is so much going on that those who are involved in social justice issues are exhausted, Hatcher said. Two employees of the commission do the racial justice work for Pennsylvania’s 500 school districts at a time when “every single school is experiencing the same thing,” which is often bullying based on identity whether it is racial or gender based.

“Even before the election of 2016, but particularly since November 2016, we are seeing an uptick in the reporting of racially motivated incidents happening in the schools all over the commonwealth,” she said.

This includes walking through the halls with a Confederate flag, doing the “Heil Hitler” salute or saying things like “white power,” Hatcher said. In predominantly white school districts, the response too often is “kids will be kids.”

As a result, children are not getting the full use and enjoyment of their educational experience even if it is a well-resourced school, Hatcher said.

“We have to do better as a society,” she said.

Hatcher also addressed the characterization of people in the criminal justice system through the lens of the case of Amber Guyger, the former Dallas police officer who was recently convicted of the murder of Botham Jean in his apartment. It angered Hatcher that Jean, as a black man, had to be characterized as a “nearly perfect” victim.

“I don’t care if he was an ex-con, unemployed, whatever. He was still an innocent man in his own domicile, minding his own business, so when we talk about the Castle Doctrine, it’s interesting to me that it didn’t apply to him,” she said. “Where was his right to protect his home or to stand his ground?”

It was “almost revolutionary” that Guyger was convicted and sentenced to 10 years in prison, Hatcher said, but imagine if the roles were reversed and a black man had walked into a white woman’s apartment.

In a panel to close out the day, Tiffany Jeffers, a professor at Penn State Dickinson School of Law, returned to the Guyger case, contrasting her 10-year sentence to a 45-year sentence handed down to a juvenile who was convicted of felony murder for being in a car whose driver ran over an officer. She encouraged attendees not to suppress contradictory feelings that arise in these complicated issues.

Jeffers said she looks at the disparity between the sentences and, as a black woman, her immediate reaction is rage, but she does feel some empathy for Guyger. Though she didn’t know if Guyger was racist, Jeffers said she knew that she made a “horrific decision” that led to a man’s death.

She challenged people to accept such nuances in the human condition, but to think practically about how to overturn systemic racist policies and break out of the silos that separate people in the community.

“There are literal railroad tracks in the community. You think about the inequities as they span those sections of the railroad tracks,” Jeffers said.

One proposal is to create a single, integrated school for kindergarten through third grade that would be attended by all of the children of Carlisle regardless of their socioeconomic status, race or parents’ professions, she said.

“We (would) begin to break down some of those silos,” she said.

Lassiter encouraged people to be well read, especially in materials regarding race relations, and to form their own opinions.

Ultimately, people have to be willing to have conversations about social justice, which Lassiter said begins with “self-talk,” the kind of daily reflection in which an individual checks themselves to make sure they aren’t prejudiced, xenophobic, transphobic or the like. Then, it’s time to start talking to other people.

Lassiter suggested having those conversations with your inner circle, but to be ready to move on.

Jeffers echoed that, saying that conversations need to include both ends of the spectrum and involve people who may not think like you.

“At the end of the day, I do believe that Carlisle has good people. It’s just a matter of how we interact with each other and what we’re doing, again, to dismantle those systemic problems that keep us separated in this small, unique, but very, very diverse town,” Jeffers said.

A one-day forum aimed at building civil discourse will be held in Carlisle next week.

The Social Justice Forum will be held from 10 a.m. to 3 p.m. Oct. 15 at the Cumberland County Historical Society, 21 N. Pitt St. The event is free, but registration is requested at the YWCA Carlisle website, ywcacarlisle.org.

While the distribution of Klu Klux Klan fliers in Carlisle last month may have been shocking, it wasn’t entirely unexpected, community leaders…

When Arlette Morales heard that the federal Deferred Action for Childhood Arrivals program was threatened to end, “my whole world crashed,” she said.

Tameka Hatcher of the Pennsylvania Human Relations Commission says the commission has seen an uptick in the reporting of racially motivated incidents in the schools all over the state.

Tameka Hatcher of the Pennsylvania Human Relations Commission talks about how social justice issues intertwine on Tuesday afternoon at the Cumberland County Historical Society during the Building Civil Discourse in the Susquehanna Valley social justice forum.

Tameka Hatcher of the Pennsylvania Human Relations Commission spoke at the Building Civil Discourse in the Susquehanna Valley social justice forum on Tuesday.