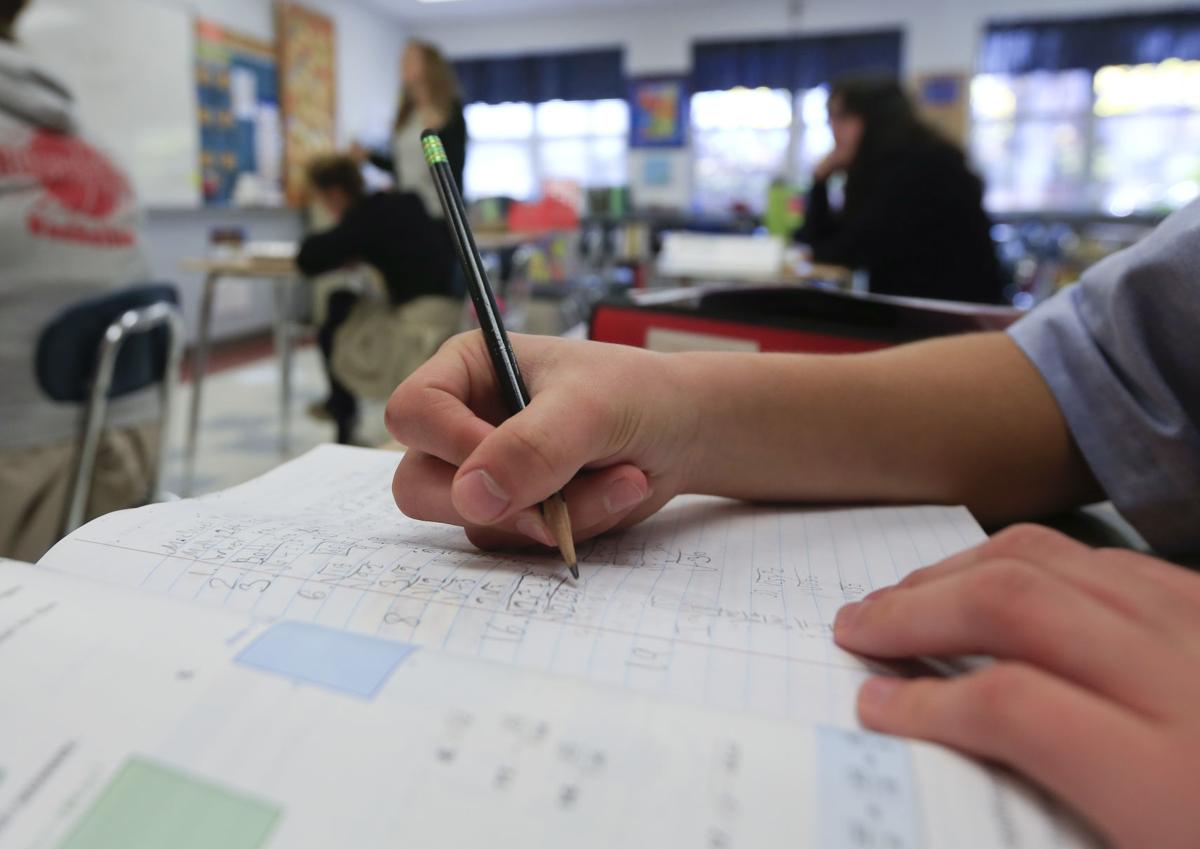 In this 2015 photo, a student works in an eight grade algebra class at Holy Spirit School in East Greenbush, N.Y. Teachers aides in Carlisle worry about instability for students should their positions be outsourced.

The little boy sat in the big, comfy chair reading stories about monsters.

Every so often, two or three times a month, he would stop in the library of North Dickinson Elementary School where Tamme Helwig works as an aide.

“That was always kind of neat,” she recalled. “He would come down and we would read together.”

For Leslie Paine, a job perk is watching the faces of children when they finally grasp a concept they were struggling to understand. She remembers a fifth-grade math student.

“Something I did that day, it clicked. I could see the light bulb going on,” said Paine, a learning support aide at Mount Holly Springs Elementary School. “I made a difference because of the way I approached the student. It makes you realize we are doing something that could be changing a kid’s life for the better.”

Yet the bond can work the other way and make a difference in the life of an aide. AnnMarie Chaney was touched when a boy mentioned her during a show-and-tell about Thanksgiving. “I like you so much,” he told her, pointing out to the class that she cares and that he is thankful for her.

“That’s the kind of thing that motivates me,” said Chaney, an instructional assistant at Mooreland Elementary School. “It keeps me going. They know they have struggles and we are there to help them.

Chaney, Helwig and Paine are among the 83 instructional aides whose jobs may be outsourced next school year depending on a decision to be made by the Carlisle school board.

District administrators have recommended the board outsource the jobs to ESS as a way to save the district about $600,000 in personnel costs by removing those positions from the pension and health insurance rolls.

For months, the aides and their supporters have attended board meetings to emphasize their value as district employees and to fight for their jobs. They have pushed back, offering the board a list of alternatives to close a projected $3.7 million shortfall in the budget for 2019-20.

The Sentinel interviewed Chaney, Helwig and Paine to get a better understanding of the job requirements and work duties of aides.

Most aides are high school graduates who learn on the job through interaction with classroom teachers and staff. Because they work with special needs students, Chaney and Paine are required to have 20 hours of training per year in such areas as behavioral management, autism and trauma in the student’s life.

The level of interaction between a student and an aide depends on the assignment. A personal care aide works one-on-one with a specific student, helping that child through their day. While Chaney and Paine work daily with students in classrooms for hours on end, Helwig is a library aide who sees every student in two elementary schools once per six-day cycle. All three women have a different story on how they became an aide.

Chaney was taking college courses in nursing and psychology when she left to raise a family. She began as a volunteer classroom helper at Saint Patrick School and later landed a job as a classroom aide. After the parochial school eliminated her position, she transferred her children to Mooreland Elementary School, which is where Chaney has been an instructional assistant for 14 years.

Chaney works in the kindergarten classrooms and in an intensive speech and language classroom. Part of her job is to reinforce daily lessons by interacting with small groups of students who are having trouble with reading. Chaney also works bus, cafeteria and recess duty where she monitors student behavior and makes sure they are safe.

Paine started in day care and had children enrolled at Mount Holly Springs Elementary School. One day a secretary told her that a substitute aide position was open. She applied for it. Later, the substitute position turned into steady work at the school where she has been for 11 years.

As a learning support aide, Paine works with special needs students one-on-one and in small groups. Her schedule takes her into six classrooms where she helps reinforce math and language arts skills. She would read a math problem and walk a student through each step. She would discuss reading comprehension and the main idea of a story. She would help students learn the parts of a paragraph, such as the opening sentence, closing sentence and relevant detail.

“Teachers benefit from all aides,” Paine said. “We do a lot of the copying and some grading for them. We build fluency and do one-on-one testing with students.”

An aide can also serve as an extra set of eyes and can fill in temporarily when the teacher has a meeting to attend. While the teacher has to focus on delivering instruction to a broad range of learners, classroom aides can focus more on specifics and get more personal with each student, Paine said.

Helwig worked three years as a classroom aide at North Dickinson Elementary School before a library aide position opened up. That position is shared with the Mount Holly building. Her duties include checking books in and out, re-shelving books, processing new material for circulation, pulling material for lesson plans and helping students find books.

Her schedule alternates between the two buildings where classrooms of students are rotated into the library for one period of instruction every cycle. As a result, Helwig has less daily interaction with individual students, though there have been some who have come to her looking for specific books.

The consensus among the three women is that outsourcing aides would create instability in the schedules of students whose home life is not always nurturing.

In her 17 years in education, Chaney has seen an increase in the number of students from low-income, single-parent and broken households. She knows of a child whose mother died of a drug overdose and whose father is still doing drugs.

“School is the last thing on their mind,” Chaney said. “They are worried about what they are going to have for dinner tonight.” Chaney said that as an aide, she is like a second mom to some students. Many aides have told the school board that students are more likely to confide in them than their teachers.

The aides received word of the outsourcing proposal in an email sent at 2:30 p.m. on a Friday, Chaney said. For her, it was like a slap on the face that the district would even consider replacing all the aides.

“We felt so undervalued and underappreciated,” Chaney said. “We are not in it for the money.”

Based on the interviews, the aides are fighting more to retain their benefit package and their interaction with the students than for their hourly wage, though that’s a sore spot, as well.

Under a three-tiered system proposed by the school district, Paine with 11 years of experience will be paid the same wage as someone just hired. “That doesn’t seem fair,” she said. “We are still losing money because of the insurance.”

Paine would have to pay $3,200 more a year in premiums on top of a $3,000 deductible. For now, Paine is 90 percent sure she is going to stay with the school district and reapply for her job through ESS.

“I have lived in Mount Holly 25 years or more,” she said. “This is my home. These are my kids. These are kids I have developed a bond over the years.”

Chaney is undecided. She said there are teachers who are against the outsourcing, though they have not spoken publicly. There is no guarantee the aides who reapply would get the same teacher, the same building or the same kind of classroom assignment.

As a result, the teachers are wondering how this will affect them and their ability to operate their classrooms, Chaney said. She added, right now, they have access to experienced aides who know the routine inside and out, but that could easily change if the district through ESS has to replace dozens of classroom aides before next school year.

Helwig has not decided whether she would reapply through ESS. Like the other aides, she stands to lose the ability to grow her pension, which is one of the main reasons she continues to work for the district.

She sees the move to outsource aides as a revolving door. “There’s going to be a big turnover,” Helwig said. “The stability is not going to be there. We need a stable environment for the kids. They don’t always have it at home. The school day is a big part of their stability.”

This week The Sentinel takes a Closer Look at teachers aides and Carlisle's proposal to outsource the positions.

What are teacher's aides and what do they do in schools?

What is ESS and how does it affect aides and the district's budget?

The Carlisle Area School Board on Thursday night approved the outsourcing of educational aides.

With tears in his eyes, Sean Bates hugged an instructional aide.

Carlisle board member to voters: Show state lawmakers the door

Rick Coplen challenged local voters Thursday to hold accountable in 2020 the state lawmakers who fall short in their support of public education.

In this 2015 photo, a student works in an eight grade algebra class at Holy Spirit School in East Greenbush, N.Y. Teachers aides in Carlisle worry about instability for students should their positions be outsourced. 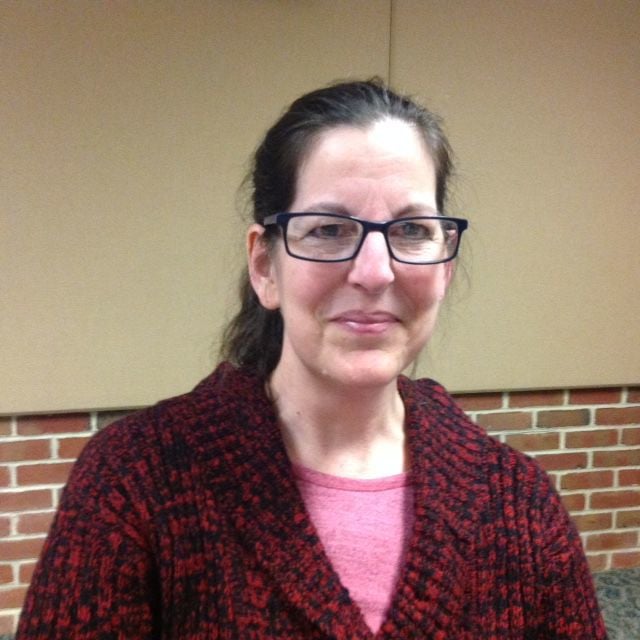 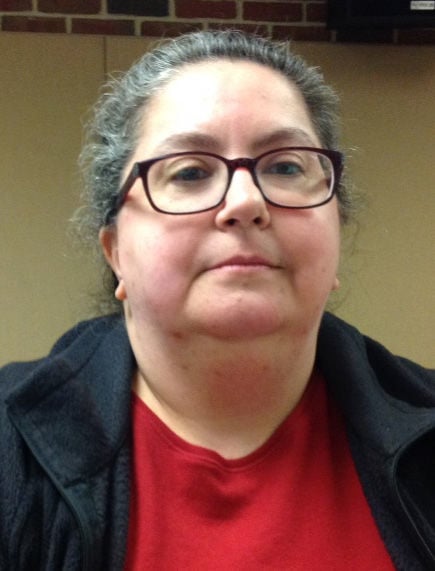