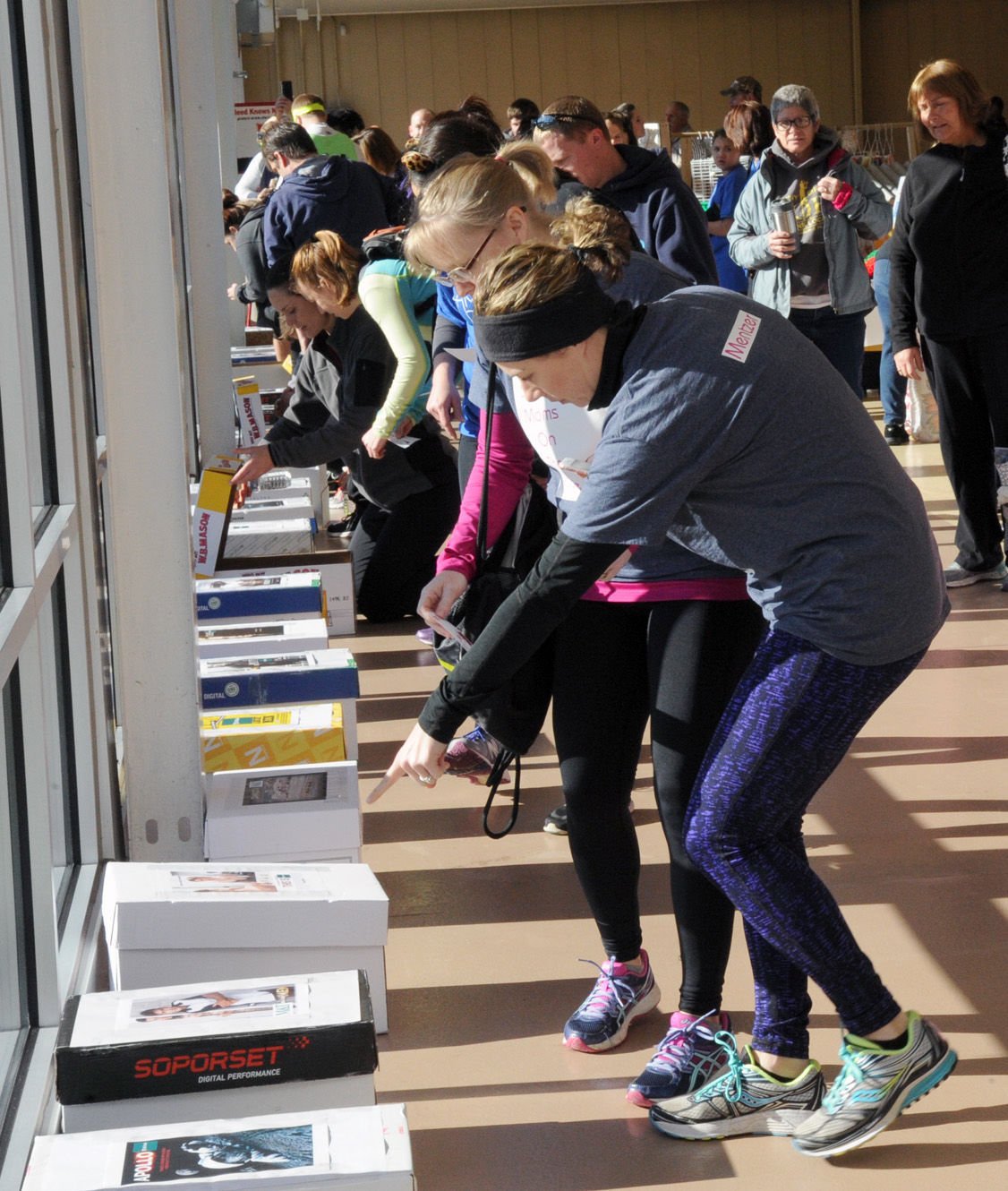 Kristy Mentzer points to a box to her teammate, Tonya Wasielewski, that holds clues for the Salvation Army Most Amazing Race held on Saturday. 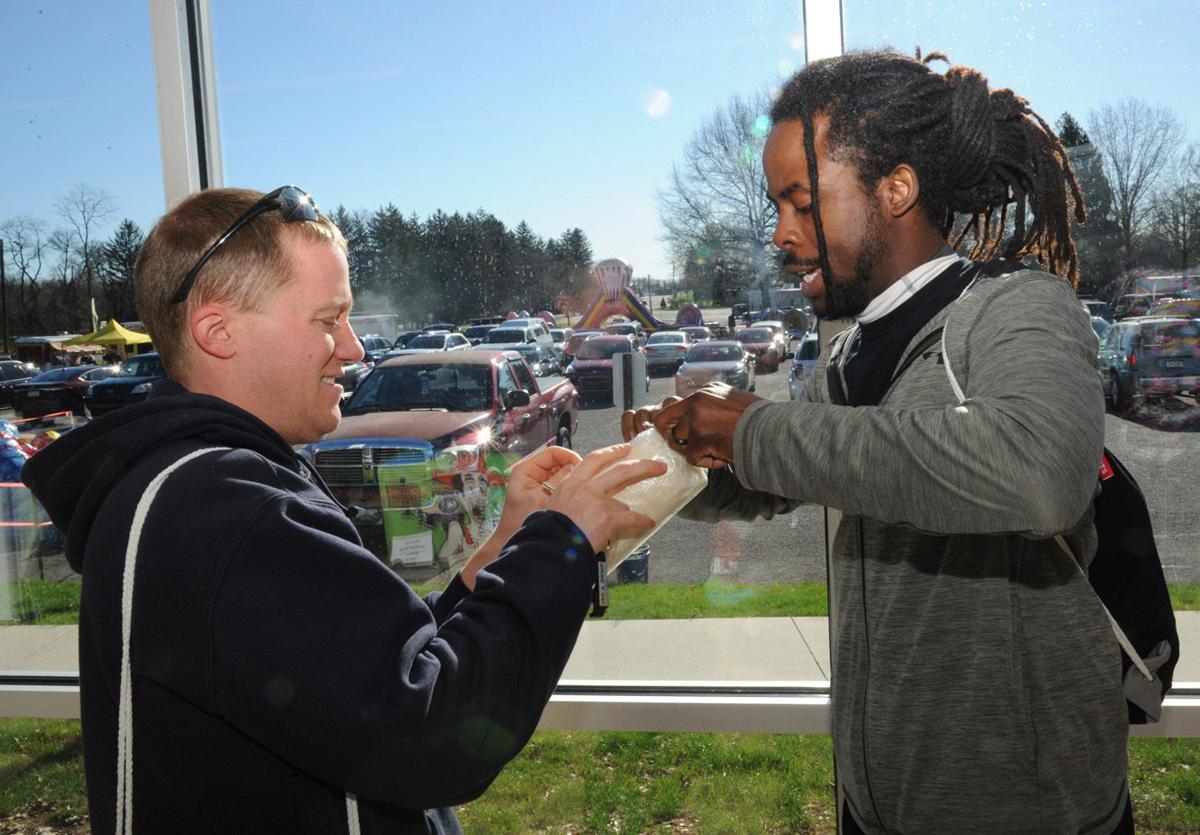 Matt Werner and Marc Michaud have a hard time opening the container that holds clues for the Salvation Army Most Amazing Race held on Saturday.

The Salvation Army of Carlisle hosted plenty of fun for a good cause Saturday with its second The Most Amazing Race and first-ever Springfest gala fundraisers at the Carlisle Expo Center.

The Most Amazing Race, based on the CBS television show, “The Amazing Race,” kicked off at 9 a.m. from the Expo Center and finished there. Contestants were required to complete a total of eight challenges in six locations within a five-mile trek throughout the downtown Carlisle area, including stops at the Old Public Graveyard, Spoons Café and Carlisle Parks and Recreation’s Stuart Community Center. Challenges involved physical and mental skills, such as running or solving puzzles.

“The great thing about this event is that you don’t have to be an athlete to compete. Teamwork and problem-solving skills are the keys,” said Major Alma Riley, co-commanding officer of the Salvation Army of Carlisle.

To qualify for the race, teams of two were required to raise at least $250 in donations for the Salvation Army. Overall, the event raised a total of $6,800, an increase of $700 over the 2016 competition.

First-place winners were Call Us An Uber team members Garrett Shumaker, of Harrisburg, and Tyler Getz, of Carlisle, who were awarded $1,000. Placing second for $500 was the Wonder Woman team of Tara Fischer and Lorelei Koss, both of Carlisle. Coming in third on Saturday was the Sibling Rivalry team of siblings Lisa Clark and Andrew Mowery, also of Carlisle. Clark and Mowery donated their $250 prize to the Salvation Army, Riley said.

Prize awards were made possible by a $5,000 contribution by premiere sponsor M&T Bank. Salvation Army Advisory Board member Lisa Thomas, manager of M&T’s Walnut Bottom Road branch, said she came up with the idea for the race after seeing it during a boat cruise stop in Mexico. Similar fundraiser races are conducted by other Salvation Army branches throughout the country.

“It’s called ‘The Most Amazing Race’ instead of just ‘The Amazing Race’ like the TV show because the tagline for ours is ‘Doing The Most Good,’” Thomas said.

Also on Saturday, the Salvation Army’s inaugural Springfest filled the Carlisle Expo Center with 92 vendors and around 450 attendees, according to Salvation Army Advisory Board member Cindy Spitman, who organized the event.

Inside, vendors offered everything from jewelry to cookies to cigar box guitars, while outside, food vendor trucks and children’s bounce houses lined the parking lot. Door prizes and free raffles also were offered throughout the day.

“We haven’t bought anything yet, but we’ve found lots of things we’d like to buy,” McMurray said. The teens. however, kept steady eyes on Geesaman’s earrings stock, and Slusser already was waiting for another vendor to finish a ring engraved with her dog’s name.

Nearby, vendor Shelly Fountain, of Camp Hill, was stepping out with goods from her new home business, “For Love of the Cookie,” while vendors Michael and Linda Newcomer, of Newville, were surrounded by a decorative display of their cigar-box guitars.

“I make them and he designs them. It’s fun to do,” Linda Newcomer explained about their home business.

All in all, Saturday’s Springfest raised more than $5,000 in vendors’ fees, with Red Kettle donations for the day yet to be determined. “I feel this is a successful first day,” Riley said. “We were competing with a lot of other things going on today around the area like Easter egg hunts, soccer games and lacrosse. This is pretty good attendance considering all that.”

Proceeds from The Most Amazing Race and Springfest will help of fund Salvation Army’s programs in Carlisle.

Kristy Mentzer points to a box to her teammate, Tonya Wasielewski, that holds clues for the Salvation Army Most Amazing Race held on Saturday.

Matt Werner and Marc Michaud have a hard time opening the container that holds clues for the Salvation Army Most Amazing Race held on Saturday.