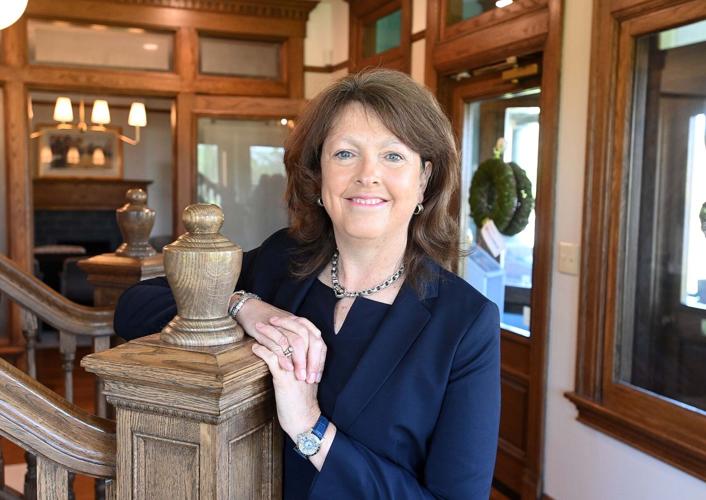 Michelle Crowley, president and CEO of the Carlisle Chamber of Commerce, will leave the position effective June 1. 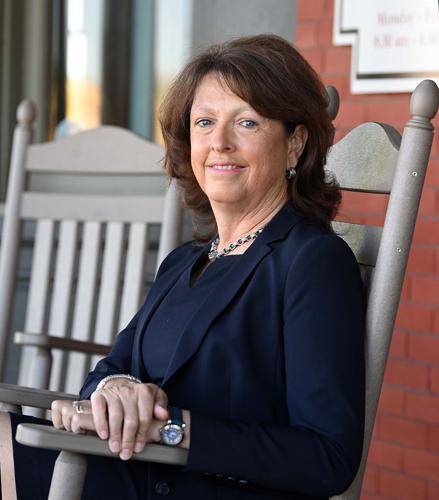 Michelle Crowley has worked for the Carlisle Area Chamber of Commerce for almost 24 years. 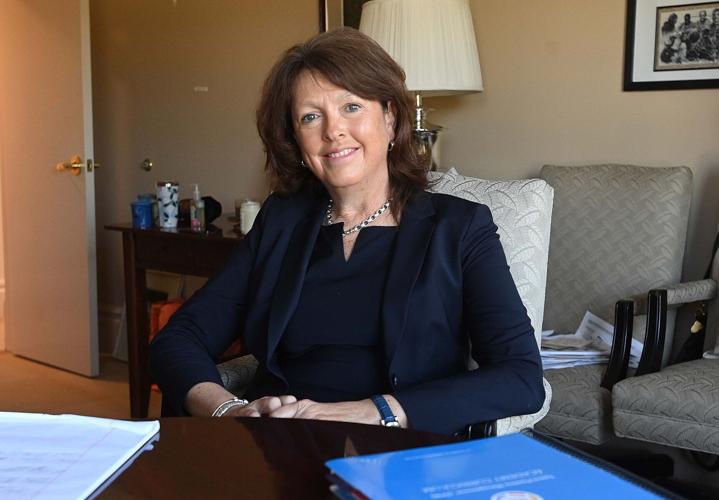 Michelle Crowley plans to work as an independent sales representative for a fabric company after stepping down as president and CEO of the Carlisle Area Chamber of Commerce.

Like the town she grew to love, Michelle Crowley finds herself at a strategic crossroads.

Effective June 1, she will step down as the chief executive officer of the Carlisle Area Chamber of Commerce after almost 24 years on the job.

“What I’ve learned about myself is my confidence level has changed through time,” Crowley said. “I’m considered the old bird sitting around the table.

“I know the history,” she said. “Sometimes, history is important. Sometimes, people listen to the history and sometimes not, but I think it’s important to know where you came from.”

It was quite a different scenario when Crowley started at the chamber in July 1998. She thought she knew it all, but was actually very green in the role of chief liaison between local businesses and the greater community.

Now the transplant from Johnstown has local roots that run so deep she has no plans to pick up and leave.

“I’m a chamber member,” Crowley said. “I will be retaining that membership. I’m going to be involved in the chamber’s talent pipeline academy.”

Based on a model developed by the U.S. Chamber of Commerce, planning for the local academy is underway by Crowley and fellow volunteers as a method to strengthen workforce development.

This effort started before the onset of COVID-19 with a committee that worked with employers to identify their needs. Following a disruption caused by the pandemic, the intent is to jump-start the academy initiative in mid-June.

“The great thing about the chamber is there’s always a new opportunity,” Crowley said. “Every day, there’s something different that we can do to help the community.”

Over the years, Crowley has been contacted by head hunters working for other chambers in the region seeking a professional skilled in senior level management. She said she turned down all those job offers.

“I could not leave to go to another chamber within the region,” Crowley said. “I could only leave this chamber to do something completely different from what I am doing.”

A year ago, she started a side business selling fabric to quilt shops. A contact from that enterprise offered her a job this spring as an independent sales representative of the mid-Atlantic region for Free Spirit Fabrics, a wholesale supplier owned by the Jaftex Corp.

A Boiling Springs resident, Crowley will use the Carlisle area as her base of operations from which to sell product lines to 200 clients in Pennsylvania, Maryland, Virginia, Delaware and the District of Columbia.

“My husband is going to retire very soon,” she said. “He can travel with me. This gives me more flexibility for our life together. It’s good for the two of us. It’s good for us as a couple.”

Crowley met her husband, Steve, through their mutual ties to the chamber. Over the years, she’s made a lot of local friends and family members have gradually moved into the area. Crowley said she now has a step-granddaughter living in Carlisle.

“I love where we live,” she said. “Our community is so different than so many others in south-central Pennsylvania. We’re much more diverse with our population being transient. Pretty much every year, we have new students moving in at the Army War College, Dickinson College, Penn State Dickinson School of Law and the Central Pennsylvania Youth Ballet.

“We’re a retirement hub,” Crowley said. “Pennsylvania does not tax retirement income so we find people relocating into our market because their kids live somewhere within a two-, three-, four-hour drive. We’re going to see more relocation here as baby boomers retire.”

With its location at the center of a natural gateway to the interior, Carlisle has always been a strategic crossroads, Crowley said. Though this mix of military, education and transportation has kept the area vibrant, there have been changes and challenges during her tenure as chamber CEO.

“When I started my career here, one of the first things we tackled was Dickinson School of Law merging with Penn State,” she said. “There was a period of time when they were thinking about leaving the Carlisle area completely.

“We went to battle with Penn State, which was not easy to do because one of the founding members of the chamber was Dickinson School of Law,” Crowley said. “To be sitting on the opposite side of the table of one of your supporters was not easily done.”

Gradually, that situation was resolved and Penn State now operates a dual campus law school in Carlisle and State College. “They are still big supporters of the chamber today,” Crowley said. “We’re glad that the relationship is here and that the chamber played a role in their retention in the community.”

A few years later, in 2005, the chamber mobilized again by forming a committee in response to the news that Carlisle Barracks was listed on the Base Realignment and Closure list, she said. “We had a rally on the steps of the Old Courthouse. I remember when Sen. Santorum called Congressman Platts and said the War College and barracks was off the list.”

More recently, Crowley started a support group with fellow chamber executives from different parts of Pennsylvania. “We met every Thursday at 3 p.m. during the first year of COVID,” she said. “We were trying to figure out how to keep our communities going, the business community thriving locally. We were relying upon each other. Getting through COVID was one of our biggest accomplishments, but we’re not done yet.”

In 2019, the chamber acquired the Swarner House from Carlisle Area School District. The brownstone and brick structure is the first old building travelers come across after leaving Interstate 81 at the Hanover Street exit to head north toward downtown.

The Swarner House gave the chamber 27 off-street parking spaces along with three different-size board rooms for meetings. Its location off a major highway offered the chamber an expanded opportunity to reach people relocating to the Carlisle area.

Crowley said one of her proudest achievements was a retention policy that worked with chamber members struggling to pay their dues. “We didn’t carry them forever,” she said. “But we did say ‘Let’s take a break for a few months to a year.’”

Over her tenure, the chamber grew to about 700 members prior to the pandemic. “We lost a few,” Crowley said. “But we’re almost back to where we were. I’m very proud of that. To me, one of the strongest things is leading a healthy organization into the hands of someone who’s going to come in and run with it. The chamber is so much an integral part of the community.”

A search committee has been formed to find Crowley’s successor. She said there are three main issues to be mindful of — workforce development, housing, and maintaining the local infrastructure including transportation.

Housing should be a focal point, Crowley said. “If we’re not building houses and apartments that individuals can afford to move into, we’re not going to fill that [workforce] gap.

“We all have to work hand-in-hand,” she said, recommending that regional chambers continue to collaborate with county agencies tasked with planning, economic development and housing and redevelopment.

Above all, Carlisle needs to avoid the fate of Johnstown, Crowley said. “The population of my hometown compared to what it is today has decreased significantly. As soon as U.S. Steel lost its strength in the ‘60s, it made it easy to lose jobs.”

While Carlisle and Cumberland County has become a hub for the warehousing and distribution sector, the local economy should avoid being centered in just one industry, Crowley said.

Photos: Carlisle Chamber Of Commerce settles in at Swarner House

These are the Most Popular U.S. Cities to Move To

These are the Most Popular U.S. Cities to Move To

Michelle Crowley, president and CEO of the Carlisle Chamber of Commerce, will leave the position effective June 1.

Michelle Crowley has worked for the Carlisle Area Chamber of Commerce for almost 24 years.

Michelle Crowley plans to work as an independent sales representative for a fabric company after stepping down as president and CEO of the Carlisle Area Chamber of Commerce.