Become a Member
Read Today's E-edition
Share This
In Carlisle, Casey pushes plan to shore up children’s programs
0 Comments
Share this
1 of 2 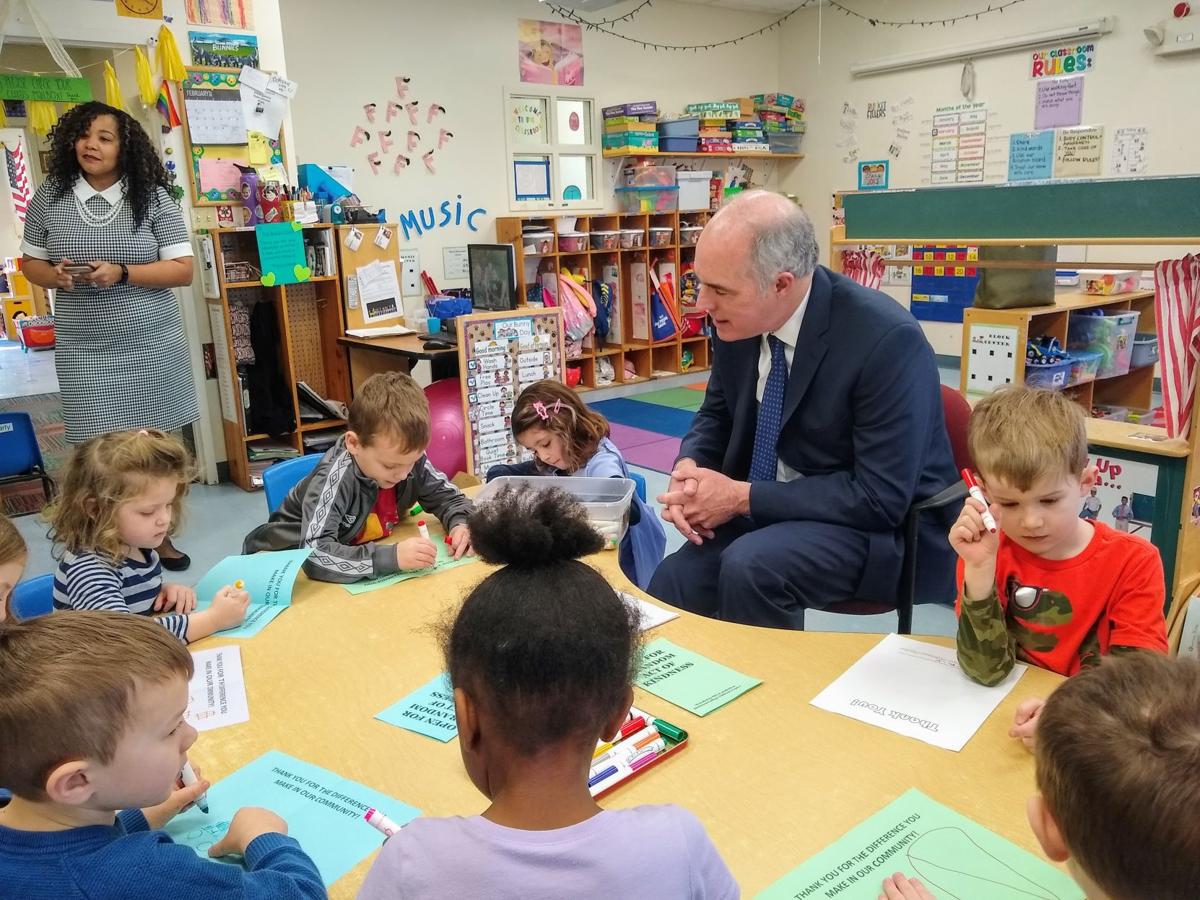 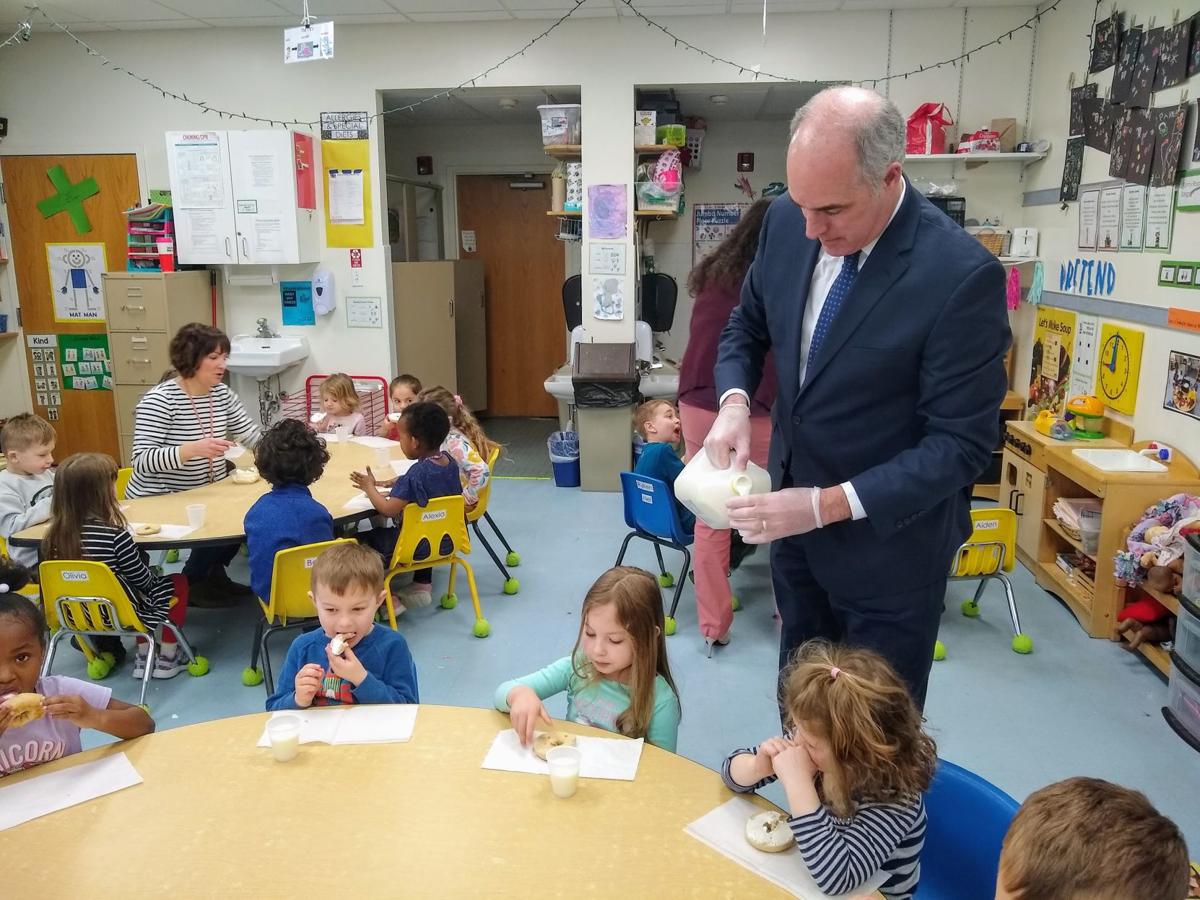 After 40 years of what he described as deliberate underfunding, and approaching the “most important presidential election since 1932,” Bob Casey is ready to get aggressive.

Pennsylvania’s Democratic U.S. senator visited Carlisle Friday as part of an effort to gather information and support for his “Five Freedoms for America’s Children” plan, a multifaceted set of legislative proposals designed to improve children’s access to education, food and economic opportunities.

Casey’s pitch is also a pushback against an economic narrative that concentrates on tax cuts as the prime driver of growth – and one that Democrats say is wrong, both mathematically and morally.

“Part of the reason child care is underfunded, early learning is underfunded, children’s health is underfunded, is that we’ve given all this revenue away in the form of tax cuts,” Casey said in an interview Friday morning after touring the Dickinson College Children’s Center.

“Those tax cuts are a choice. When you give — between 2000 and 2018 — when you give $1.2 trillion to the top 1%, that means every year in the context of federal budget, you’re forgoing tens of billions of dollars that could be put toward kids,” Casey said.

His proposal is expansive, and expensive. The Five Freedoms plan breaks the agenda down into freedom to be healthy; to learn; from hunger; to be safe from harm; and to be economically secure.

The last appropriations bill, for instance, hiked federal Head Start funding by $550 million, to $10.6 billion; one facet of Casey’s Five Freedoms plan is to put an additional $18 billion into Head Start in a single year.

But this isn’t uncalled for, Casey said. Only 36% of children age 3 to 5 who are eligible for Head Start programs actually get them due to a lack of sufficient funding to sponsor programs to capacity, according to a study by the National Head Start Association.

Likewise, a declining portion of families eligible for child care subsidies actually get them due to a lack of state and federal funding; only about one in seven families who qualify get into a subsidized program, according to a study of federal data by Child Care Aware. Increasing federal child care block grants by $7.1 billion would cover another 1.57 million children, roughly doubling the number of children served, according to Casey’s office.

The need is obvious, according to Dickinson child care staff. The center enrolls the children of college employees, as well as Carlisle community members. Some of these children receive subsidies, and the college provides scholarships to cover the rest, but it’s not enough.

“There’s more demand for scholarships than what we have,” Dickinson College Children’s Center Director Gina VanKirk said. “We have a number of families on the child care network, but we can only help so many with that difference.”

Likely the most ambitious part of Casey’s Five Freedoms proposal is to automatically enroll all children in Medicaid until age 18 unless their parent or guardian opts out, a move for which he cites a Georgetown University study last year showing the uninsured rate for children is on the rise and that the increase is three times as high in states that haven’t adopted the Medicaid expansion allowed under the Affordable Care Act.

“We now have 50 years of data on Medicaid that says it’s really good for kids,” Casey said.

His plan would also create a savings account for every child into which the federal government would deposit $500 per year, up to age 18, and would also match parents’ contributions up to a certain level. The account could be used to help pay for education, start a business or purchase a home once the child becomes an adult.

Casey’s plan would also significantly expand the Child Tax Credit and the Child and Dependent Care Tax Credit, endorsing the tax credit expansion bill by Sens. Sherrod Brown and Michael Bennet that could cut child poverty by a projected 38%, according to a Columbia University study published last year.

It’s on the tax credit issue that Casey makes his political point. During negotiations on the 2017 tax cuts, the corporate net income rate was originally planned to be dropped from 35% to 20%, but Republicans bumped it back up to 21 percent in a later revision to allow for an expanded child tax credit.

“Let’s go back to that model,” Casey said. “Republicans have already told us, when we want to increase the child tax credit, we move the corporate tax rate. If that’s the model we’re using, let’s keep going.”

One point on the corporate tax rate is roughly $100 billion in revenue over 10 years, Casey said, so his proposal for a $70 billion tax break over a decade for working families in the form of the dependent care credit isn’t an insurmountable hurdle.

“You can put money in their pockets to pay for child care with that tax credit and you could do it for less than a point on the corporate rate,” Casey said.

His plan would bring the corporate rate back up to 28%. It would also institute a corporate minimum rate of 15% of reported profits regardless of back-end deductions. The top marginal personal income rate and the estate tax would also be taken back to their pre-2018 rate.

Casey said he was also open to proposals from other legislators, such as a wealth tax on accumulated assets or changes to the capital gains structure, as ways to pay for enhanced child welfare programs.

While increased social spending is often portrayed solely as a moral good, Democrats shouldn’t shy away from making an affirmative economic argument, Casey said, given what he views as decades of Republican failures on the matter.

“Sometimes Democrats in the past have rejected any kind of economic growth argument,” Casey said. “I think Republicans have placed an over-reliance on the stimulative impact of massive tax cuts for rich people and corporations leading to growth. The argument doesn’t bear the scrutiny, because we’ve had the experiments.”

Democrats, including Casey, have been critical of the 2017 tax cuts led by President Donald Trump for producing less-than-stellar results.

Economic growth in 2019, at 2.3% of gross domestic product, was lower than it was in 2017, before the tax cut took effect, according to the federal Bureau of Economic Analysis. Growth since the Trump cuts has been weaker than the post-recession high of 2014-15, despite the fiscal stimulus of increased deficit spending, which rose from $665 billion in the 2017 budget to $984 billion in 2019.

Average earnings for production and nonsupervisory employees likewise grew faster in 2019 than they had in the prior three years, but not as fast as in 2015, despite employers having cash windfalls from the tax cuts, according to the federal Bureau of Labor Statistics.

“The president has tried to burn the candle at both ends and it hasn’t worked out,” Casey said.

Instead, much more sustainable growth could be achieved by directly helping families pay for their children, Casey said.

A study by the think-tank Council for a Strong America estimated that, because of workers’ difficulty in finding or affording care for their children, the U.S. economy loses $57 billion per year. What if those workers didn’t have to tailor their careers around finding an employer who would cover their child’s health care, Casey asked.

“That warrants debate: If you don’t’ want to cover kids through Medicaid, what’s your idea to take the four million [uninsured children in the country] down to zero?” Casey asked. “This isn’t ‘let’s make progress,’ this is ‘let’s wipe it out, let’s make sure it’s zero.’”

George’s Pizza will close its downtown location so the two restaurants with a combined 104 years of service can converge on a single site, said George’s owner Ernie Merisotis.

Santa and his parade returned to Carlisle on Saturday after a year of COVID-induced hiatus, a critical mission for Old Saint Nick if there eve…

At Wednesday night's December workshop meeting, the borough council held a second vote on every agenda item that had been approved at its November meeting.

Hundreds of local residents started to gather around 5:30 p.m. in anticipation of Santa, who arrived at 6 p.m. with an escort of people dressed up as Marvel superheroes and fairytale princesses.

The events, which are scheduled for the second Thursday of each month, are being put on by the borough’s Truth and Reconciliation Commission as part of its work on racial equity in the borough.

Origami-inspired clothing line is designed to grow with your child

Origami-inspired clothing line is designed to grow with your child