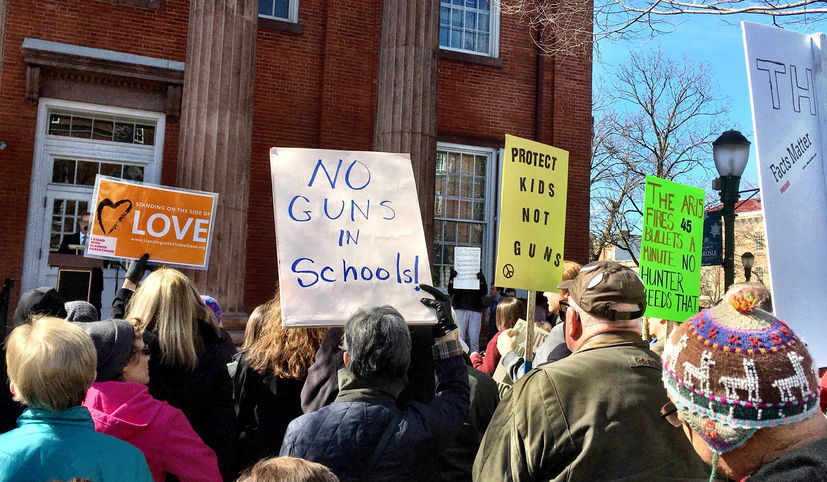 A crowd gathers on the steps of the Old Courthouse for a Cease Fire rally on the Square in Carlisle in March. 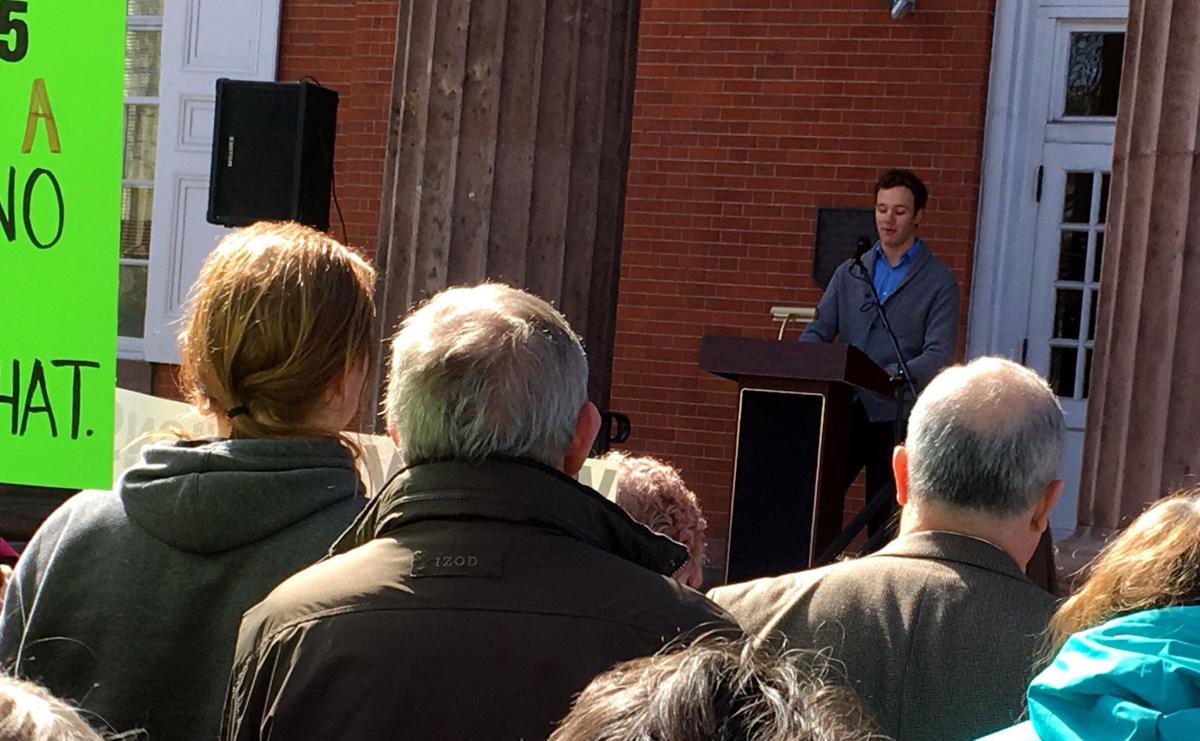 On the steps of the Old Courthouse, student organizers from Carlisle High School and their invited speakers called on the gathered crowd to lobby their legislators, register to vote and engage in discussions with those with an opposing viewpoint on the issue of what they termed sensible gun control.

Across the street, a handful of people held large signs, prayed, talked with passersby and occasionally shouted at the speakers across the street in their call to protect the Second Amendment.

Organizer David Delp was pleased with the turnout for the Second Amendment rally, given that he had only a few days in which to organize it. The point isn’t so much about the numbers, he said, but about the drive and the intensity of those who want to protect their right to own guns.

Delp said the “politicization” of the Feb. 14 school shooting at Marjory Stoneman Douglas High School is unacceptable. Those protesting are particularly concerned that the administration of the Carlisle school district appears to endorse rallies like the one at the square, but not a more conservative agenda.

“We have a right to bear arms and to pray in schools,” Delp said. “Their’s is not the only voice.”

The opposing voice, however, was the louder of the two voices on Sunday afternoon.

The Cease Fire rally started with the reading of the names and ages of students and teachers killed in four of the most deadly school shootings, including the victims at Columbine and Sandy Hook.

Student speakers tackled different angles related to school shootings, including the growing fear of the potential for a school shooting to happen here in Carlisle. They called on people to register to vote and to call their representatives in both the state and federal government. To that end, a student off to the side of the courthouse steps held up a sign throughout the rally listing the telephone numbers for those representatives.

Until now, students did not know how to speak out though they have always cared about school shootings, and been frustrated every time a sensible bill is voted down, said student organizer Aidan Checkett. This time, they have been inspired by their peers at Parkland.

“There has never been a high school shooting of this magnitude in our political lifetimes,” he said.

Every opponent thought the students would give up, Checkett said. A month later, he said they are only beginning, noting Wednesday’s school walkout and next Sunday’s rally being planned by students from Cumberland Valley High School.

“If you believe that enough is enough, we will join together today, next week, the week after and everyday until sensible gun control is enacted. We will do all we can to make sure we never see another Parkland,” he said.

Student Colin Willard spoke of mass shootings in other countries and the gun control efforts that followed, saying that they saw an issue and addressed it as much as the United States saw issues after the attack on Pearl Harbor, the taking of hostages in Iran and the 9/11 attacks and did something about it.

“Thoughts and prayers won’t stop future mass shootings,” he said. “They haven’t stopped them in the past and they won’t stop them in the future. The inaction that we’ve seen from our legislators is intolerable.”

Student organizer Michael Smith said he didn’t want to be the one to bring the message to the rally.

“I invited a lot of our Republican elected officials to speak—Stephen Bloom, Lou Barletta, Pat Toomey—none of whom were able to be here today,” he said.

He stressed the importance of dialog between those of opposing points of view on the gun control debate.

Teacher Ellie Park said she has never been more proud of teenagers than she has been in the past few months. Stressing that she was not speaking in any way as a representative of the school district, Park talked about buying bungee cords to secure the door from an intruder and a hammer to break the glass to allow students to escape through a window. She realized it sounds “irrational” to imagine herself and her students in such situations, but the possibility is real.

“In Parkland, teachers enacted those plans they had only imagined—the in case of the unimaginable—but 14 children and three adults still died,” she said.

Howe said those from groups like Moms Demand Action, Everytown for Gun Safety and the students at both Parkland and locally did not organize to take away guns or to destroy the Second Amendment.

“They organized because they are sick and tired of idiots with guns shooting our children,” he said.

Crampsie said the mass shooting discussion isn’t about political parties or even the right to own guns. Rather, it is about safety and the future.

“For those who don’t want to see change happen, you forced (the students) to have this discussion. I’m saddened to stand here today, as a millennial, and some of the other folks in this crowd, we have failed you. We have failed you when it comes to sensible gun control,” he said.

“In general, people just really like to get that feeling that they’re participating in a movement in the same way that those before them in Carlisle did,” - Michael Smith

Shaped by social media and a sense of justice, young Midstate activists step into the spotlight

Young activists raised in a culture of diversity and armed with an array of social media options are finding their voices as they lead movements for racial justice, women's rights and gun control.

A crowd gathers on the steps of the Old Courthouse for a Cease Fire rally on the Square in Carlisle in March.