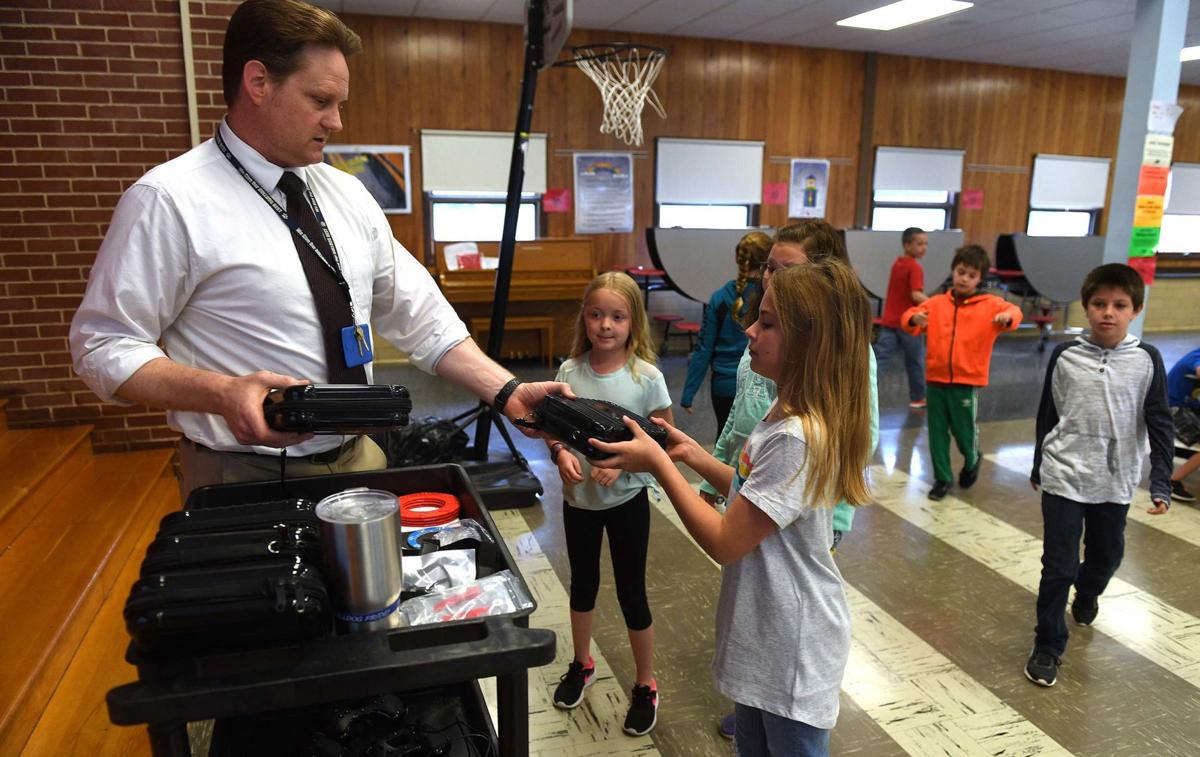 Ryan Maxwell, third-grade teacher and instructional technology specialist, hands out drones to his students at Rossmoyne Elementary School near Mechancisburg. 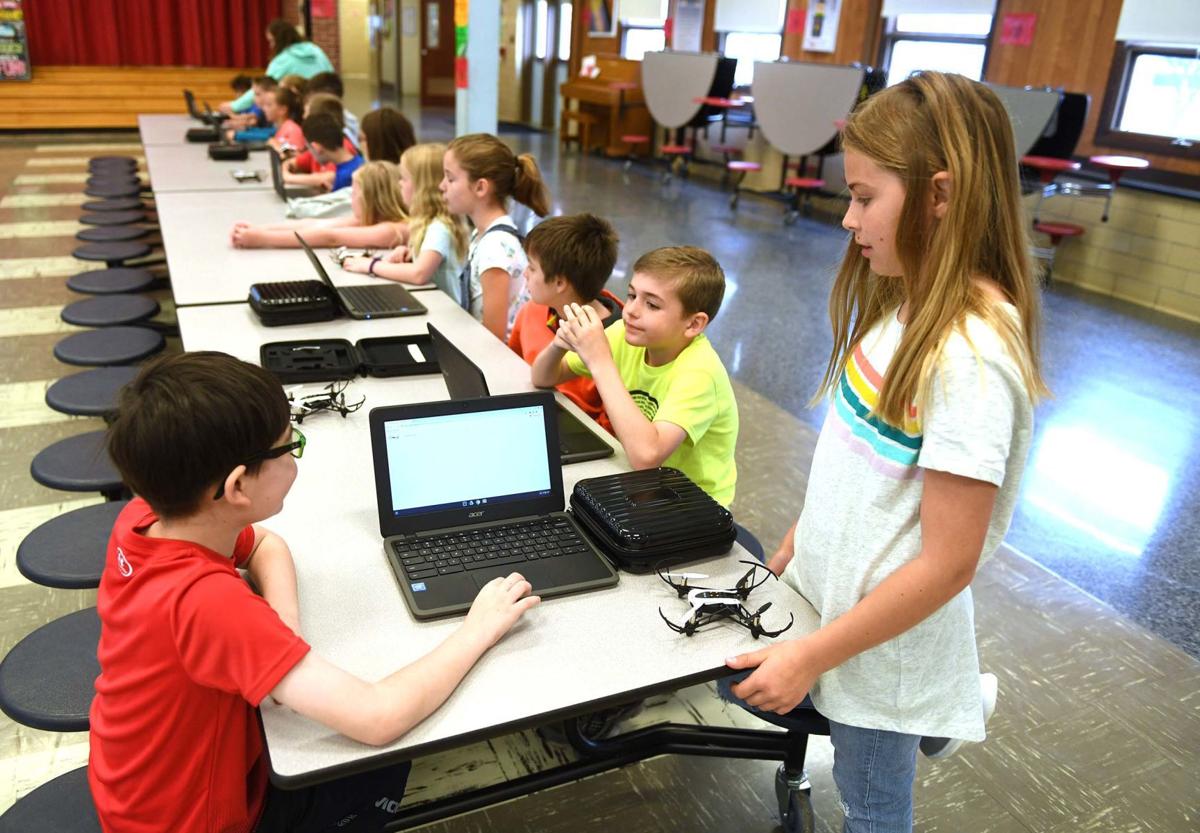 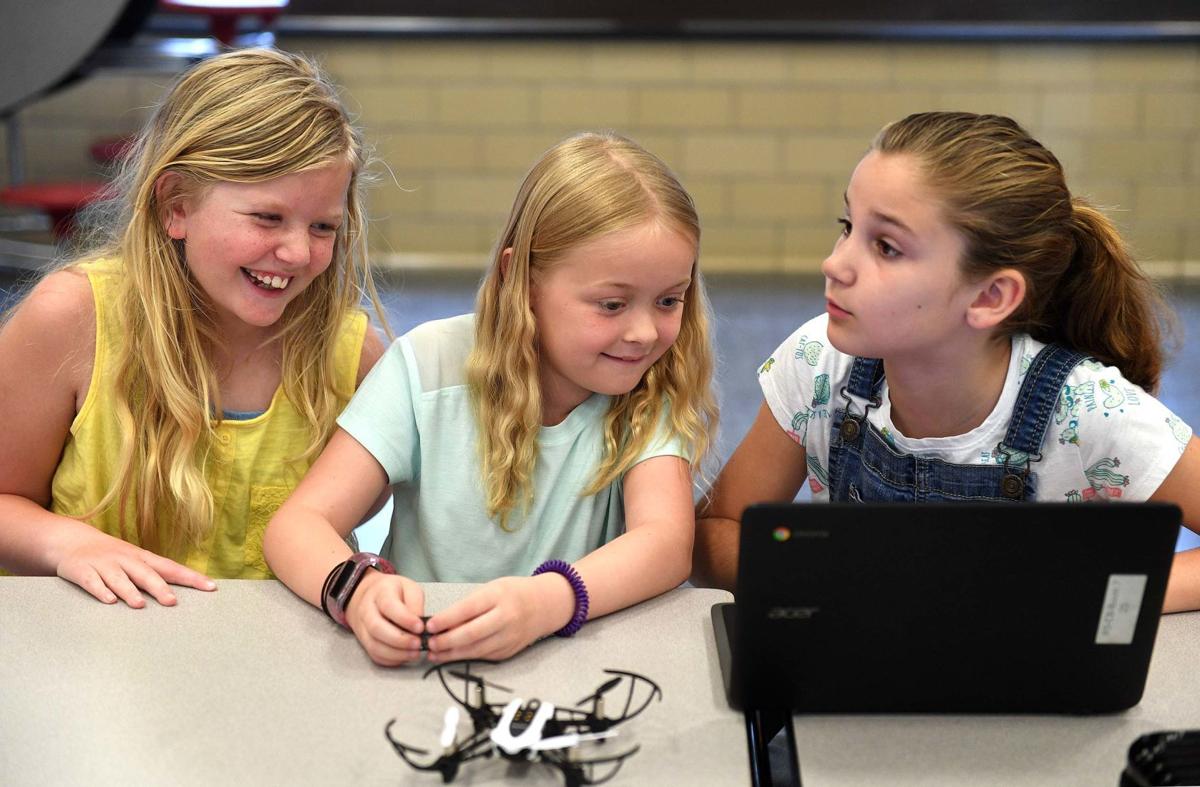 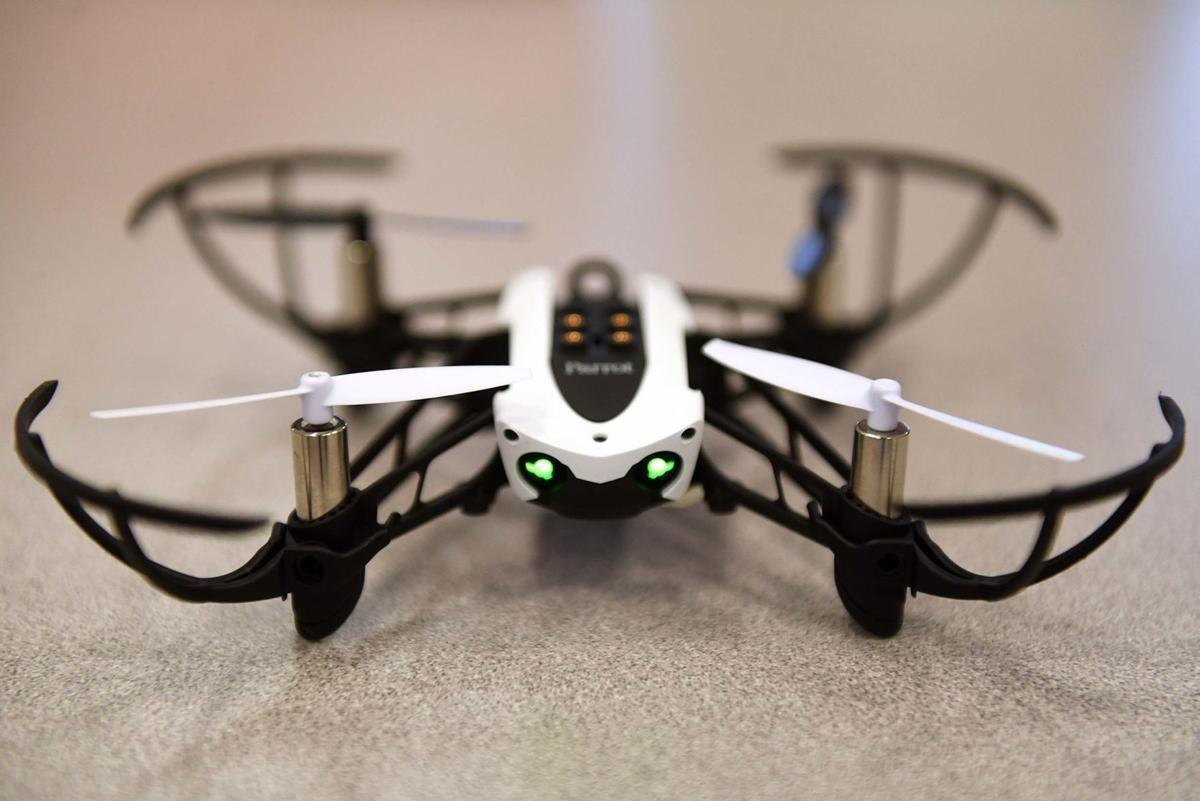 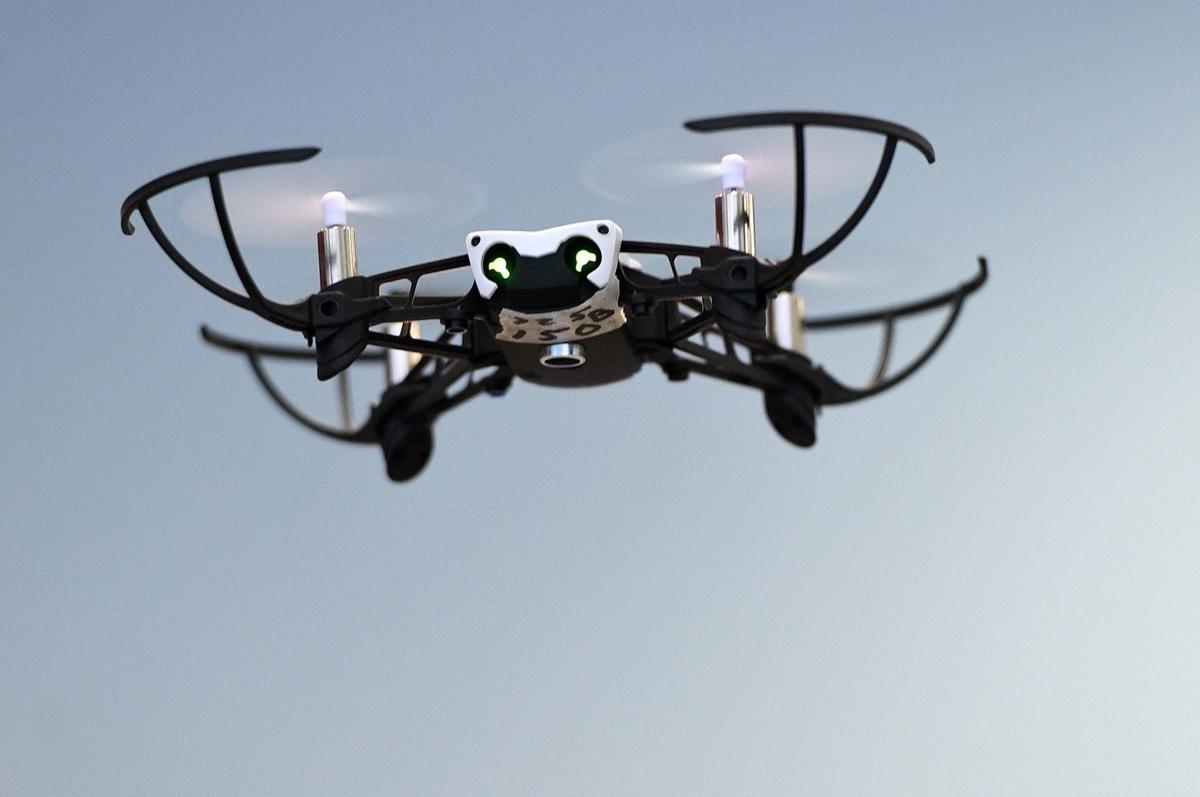 A plot was in motion involving a girl and a flying machine.

The student took her time directing the drone to touch down on the correct X-Y coordinate of a grid laid out on the stage of the Rossmoyne Elementary School in Lower Allen Township.

Third-grade teacher Ryan Maxwell had mapped the pattern with traffic cones, masking tape and signs that were clearly visible from the floor of the multipurpose room.

“They were really glued to it,” Maxwell said of his students, recalling that early experiment of using drones in education. “I knew this is something that kids can really get a hold of.”

A teacher since 2001, Maxwell always loved technology and shaped his career training around its application in the classroom. Last fall, he was among the West Shore School District faculty members who attended the Tinker Expo hosted by the Capital Area Intermediate Unit.

That conference included a panel of experts on the use of drones in the military, business and industry. Each educator received a minidrone for indoor use and a textbook with suggested lesson plans.

“I saw the potential there,” Maxwell said. “You want to keep students engaged. They are tech savvy right from the moment they are entering the school system. It’s just something that’s natural for them.”

Late last year, he prepared a demonstration for school board members highlighting how students can program the drones to operate autonomously to carry out certain tasks. “They were just awestruck on what can be done for the children,” Maxwell said.

In late January, he received a grant of about $2,400 from the West Shore Foundation to buy seven drones for his classroom along with controllers, batteries and spare parts. Since then, Maxwell has been developing enrichment activities around the use of drones to roll out to students when the multipurpose room is available.

So far, his ideas have applied to geometry, geography and early algebra skills. In English language arts, Maxwell came up with the idea of having each third-grader record a video from the point-of-view of a drone in flight before reviewing the footage to write a story about being a bird.

“The sky’s the limit,” Maxwell said. “There are endless ways to integrate this into the curriculum.”

He documents every idea and process so that it can be reproduced later by other teachers. The drone lesson plans are in keeping with a trend in education where teachers serve the role of facilitator rather than just a keeper of knowledge.

“We pose the kids problems to solve,” Maxwell said. “We help them with strategy and ideas.”

Much of the focus in 21st century classrooms is in teaching students the four C’s of communication, collaboration, creativity and critical thinking. Those skills are viewed as fundamental in helping students realize the need for flexibility in adapting to the future job market.

For many of the lessons, Maxwell divides his students into small groups who must then work together to program and adjust the flight path of their drone to achieve a certain task.

To date, all his drone lessons have been conducted inside the multipurpose room of the Rossmoyne building. The school board in late October adopted a drone policy that outlined safety protocols for indoor and outdoor use.

Those guidelines require that the outdoor use of drones by district employees or students must conform to Federal Aviation Administration rules. There must be at least one FAA certified operator available to supervise an outdoor activity and, if necessary, take control of the drone.

Chris Champion, coordinator of instructional technology for West Shore School District, was instrumental in helping the school board formulate its drone policy.

Last summer, Champion became FAA-certified to pilot a drone outdoors. A hobby photographer, he purchased a model with a camera so that he could take aerial shots. Champion attended the Tinker Expo with Maxwell and five other West Shore teachers.

Earlier this year, Champion taught a six-week FAA drone certification course that was attended by six adults and a high school student. The course included lessons on precision flight and safety regulations.

Aside from Maxwell, middle school computer science teachers use drones to teach students how to program code to control a device. There are two Red Land High School seniors who are building a drone as a project in an advanced class.

There is talk in West Shore School District of using drones to inspect building roofs and to document the progress of construction projects. West Shore has an inventory of about 20 drones, mostly small models that weigh less than a cellphone.

Though other districts are not as far along, their administrators recognize drones are an emerging trend.

“It’s coming,” said Richard Fry, superintendent of the Big Spring School District. “It’s in how you balance it with fiscal resources and priorities.”

Fry equated the trend of drones with the growing use of 3-D printers in schools in recent years. “The reality was every district went at a different pace based on their capacity. So much of the challenge of public education is to see what is coming.”

To Fry, it’s clear the ability to pilot a drone is becoming a sought-after job skill for employers such as power companies. Big Spring has reviewed two different curricula but has yet to find a drone instruction model that fits the district.

Fry predicts Big Spring will have course offerings involving drones within a year or two.

Carlisle Area School District has partnered with Harrisburg University to offer local students a geo-spatial camp that includes instruction on the mechanics and operation of drones, Superintendent Christina Spielbauer said.

Michael Gogoj, director of curriculum and instruction, sees connections in technology, engineering, math and physics courses along with graphic design and photography.

“While we don’t have anything in place, that is something we would definitely support,” Gogoj said. “There is a lot of support and excitement about it, especially as it becomes more financially manageable. Prices are coming down on kits.”

At Cumberland Valley, business and industry leaders have come into the district with information and demonstrations on the value of drones in the workplace, Superintendent Fred Withum III said. “It’s only a matter of time before drones enter the curriculum. I don’t see it necessarily as a standalone course but we will begin to see broader applications within courses.”

His best guess is the high school agriculture program may be one of the first to utilize the technology. Farmers already use drones to monitor crop yields and to allow for a more precise application of chemicals closer to the ground than crop dusting.

Most recently, drone photography was used to chronicle the construction of both the Mountain View Middle School and Winding Creek Elementary School near the intersection of Bali Hai and Lambs Gap roads in Hampden Township.

Ground rules now exist should the South Middleton School District decide in the future to incorporate the use of drones into its curriculum.

Ryan Maxwell, third-grade teacher and instructional technology specialist, hands out drones to his students at Rossmoyne Elementary School near Mechancisburg.