A group of about 500 people, including students, staff and faculty, met Thursday evening at the Anita Tuvin Schlechter Auditorium to discuss various issues on campus, including racism and diversity. 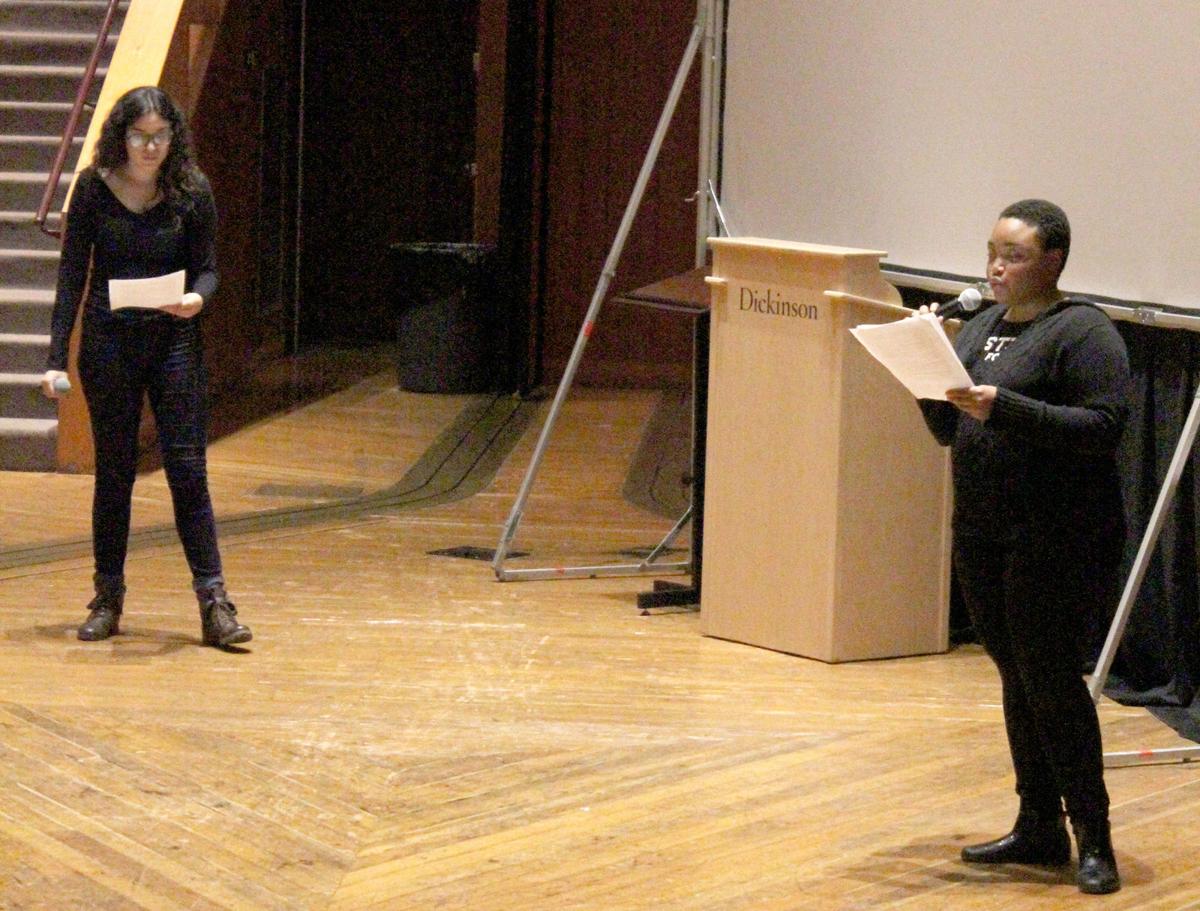 Jessica Sykes For The Sentinel

A gathering of about 500 people, including students, staff and faculty met for an hour-and-a-half Thursday evening at the Anita Tuvin Schlechter Auditorium. The event’s stated goal was to produce a list of demands regarding issues that could be presented to the college’s administration.

“This is a dialogue in response to the demonstration and a call to action,” Amezcua said Thursday.

“This is not a black issue, this is a Dickinson issue, and it’s important,” McAtee added.

McAtee and Amezcua prompted students attending the meeting to fill out index cards that were passed out upon arrival. Students were asked to write down an issue on the college campus, possible solutions, methods for those solutions and people who can help. On the reverse side, they were asked to write specific demands to give to the administration.

“We all stand ready to do the hard work of making Dickinson a more inclusive and respectful community,” Dickinson College President Nancy Roseman said prior to Thursday night’s event.

“Dickinson is committed to creating an inclusive and respectful campus community, and we have grown more diverse in recent years,” said Christine Dugan, director of media relations for the college. “Last weekend, three senior administrators, including the president, and eight students attended a national conference on diversity in higher education.”

McAtee and Amezcua opened the floor for people to share their demands at the meeting. People’s comments ranged from issues of racism on campus, attitudes toward the homeless, marginalization of groups such as international and gay students on campus, and the stigmatization of mental health issues.

Most students were in agreement that there have been numerous incidents of racism, most notably on the anonymous social media platform Yik Yak. Students were divided about the role of free speech versus creating an inclusive environment.

Student Paulina Alexis Vidanez said that one of the first steps the campus should take is the removal of sources of tension such as Yik Yak.

“We need to remove sources that people can use to bring these topics back up behind the face of anonymity … and move toward petitioning Yik Yak from our campus,” Vidanez said. “I urge you to try to make that change. You just physically have to remove yourself.”

Junior Brander Suero responded, “It’s not about drawing a line and censoring. It’s about eliminating ‘they and them’ and ‘us and we.’ We’re all here right now because we acknowledge there’s a problem. We’re all human and capable of understanding.”

Brendan Birth, senior, offered a new perspective to the discussion.

“The issue of freedom of speech does exist (with Yik Yak), but it does not mean freedom from consequence from whatever you say,” Birth explained.

Birth also stated that Yik Yak “opened (his) eyes to hateful things.” He questioned how he would continue to be aware of these issues without a platform such as Yik Yak.

Dickinson College staff and faculty members in attendance also weighed on the topics.

Reed also encouraged students to continue to press the administration.

Similarly, psychology instructor Kiersten Baughman expressed her support for the students. “We are faculty, we hear you, we feel you, we stand with you and we will carry on this mission,” Baughman said.

Harvest of the Arts returns to downtown Carlisle Saturday

Harvest of the Arts runs from 10 a.m. to 5 p.m. on West High Street, stretching from Hanover Street to College Street.

With winter approaching and COVID-19 cases steady, Carlisle’s festival is the last opportunity for many artists to gain clients before the less certain indoor show season starts.

Joelle Dietrick’s work featuring an extinct plant, a net-positive house and concentric circles will be produced this week starting on Wednesday and continuing through Sunday.

Students from Dickinson and Widener will conduct an informal policy analysis to look at past approaches to the use of single-use plastics and their results.

A food truck festival conceived as an alternative fundraising option for Project SHARE during the pandemic will return Sunday, though in a new location to help expand the options.

A group of about 500 people, including students, staff and faculty, met Thursday evening at the Anita Tuvin Schlechter Auditorium to discuss various issues on campus, including racism and diversity.