Bears vs. Rams: Latest scores and updates from MNF

Styrene found in LeTort Spring Run in the area of a July 31 fish kill in North Middleton Township has raised questions about the safety of the process being used to rehabilitate sewer pipes in the Carlisle area.

A notice of violation issued to the Borough of Carlisle by the Pennsylvania Department of Environmental Protection as a result of its investigation into the fish kill that happened near the Carlisle Barracks shows that styrene, a chemical, was found in three of five water samples taken from locations near the fish kill.

According to the notice, a contractor for the borough worked at a site about 50 feet upstream from the observed fish kill in the 600 block of Letort Lane in a channelized portion of the LeTort Spring Run to Post Road. The contractor used a process known as cure-in-place pipe installation as part of the rehabilitation project.

Carlisle Borough awarded a $8,245,274 contract for the LeTort Interceptor Rehabilitation Project, which rehabilitates sewer pipes in that area, to Ric-Man Construction Florida Inc. of Deerfield Beach, Florida, in July 2018.

According to the CIPP Solutions Group, which recently completed a three-year study into the process, CIPP involves the chemical manufacture of new plastic pipe inside an existing pipe.

The process requires the handling of raw chemicals onsite but has the advantage of creating new plastic pipe without digging up the old one and it can be less expensive than other areas, according to the group’s website.

In addition, the DEP investigation found an "unpermitted discharge of raw sewage" coming from a portable pump house that flowed onto the ground and into a channelized portion of LeTort Spring Run. The pump station was also used by the contractors. 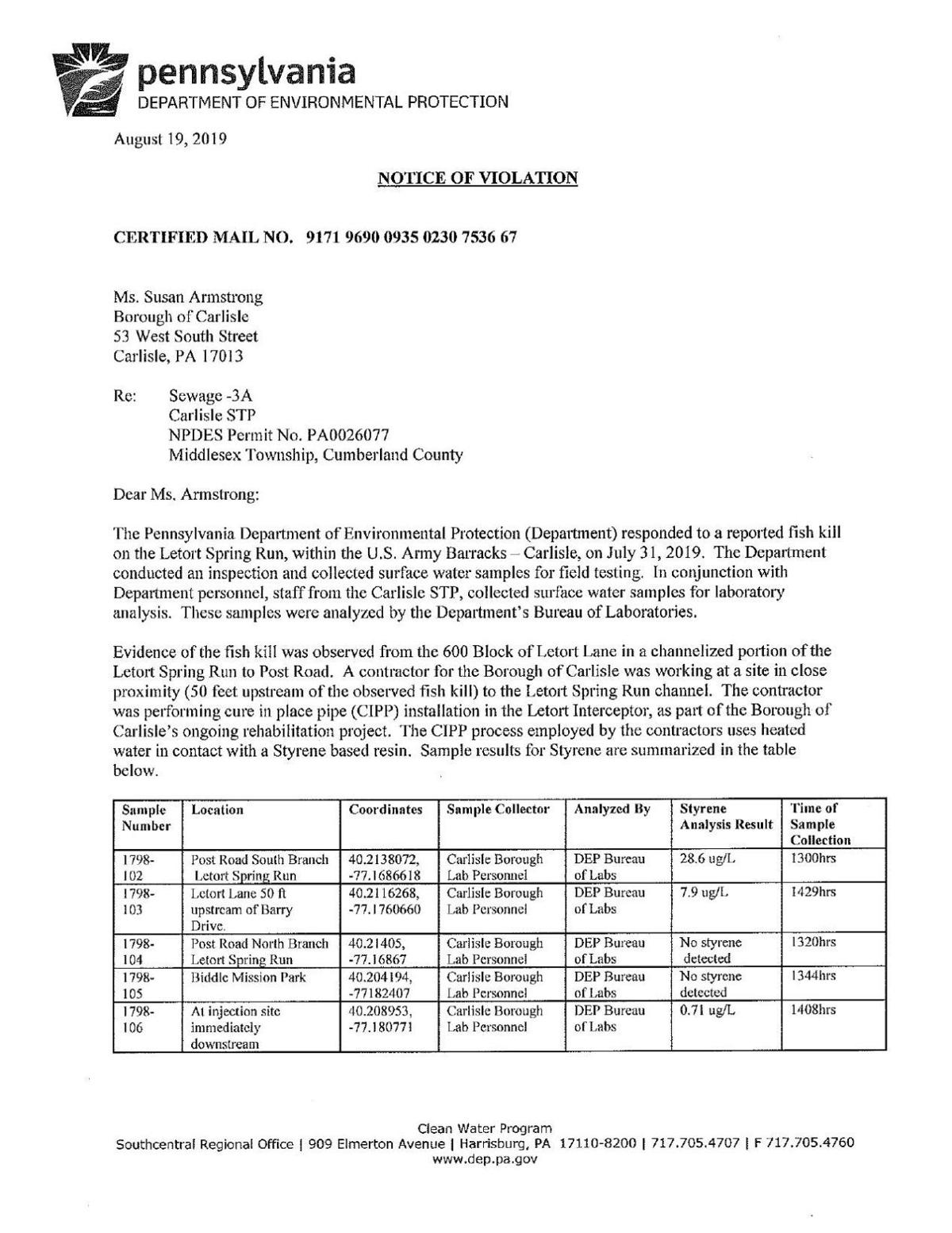 According to the DEP notice to Carlisle, a release of pollution subjects the borough to "appropriate enforcement action."

The borough has been asked to submit a written report of its own investigation into the incident, including the circumstances leading to the incident and the borough’s role in the oversight of the project within 15 days.

Carlisle Borough Manager Susan Armstrong said the borough continues to work with the DEP on the investigation of the incident and to provide the information requested.

"Be assured, that the Borough will plan to issue a public statement once the investigation has concluded, however it is too premature to do so at this time," she wrote in an email.

The notice is not a final action from the DEP, which could yet determine if an enforcement action is appropriate.

The Pennsylvania Fish and Boat Commission is also investigating the incident.

“At this point, the PFBC and DEP investigations into the incident are separate and ours remains ongoing,” said Mike Parker, spokesman for the Pennsylvania Fish and Boat Commission, in an email to The Sentinel.

That styrene was found in close proximity to a site using the CIPP process is not surprising to Andrew J. Whelton, professor at Purdue University’s Lyles School of Civil Engineering and Division of Environmental and Ecological Engineering. Whelton is a member of the team producing the study on CIPP.

“It’s pretty typical that chemicals are released into the environment during this activity,” he said, noting that styrene is not the only chemical used or released.

Chemical release is not the only concern, Whelton said. If the contractor cut the pipe after they created it, the particles could get into the air, fall back into the stream and sink to the bottom.

It can take time for the stream to recover from a contamination. Whelton said a site his group tested in New York recently had contamination above state water quality standards after 22 days.

Work on and around Carlisle’s streets is expected to continue into September.