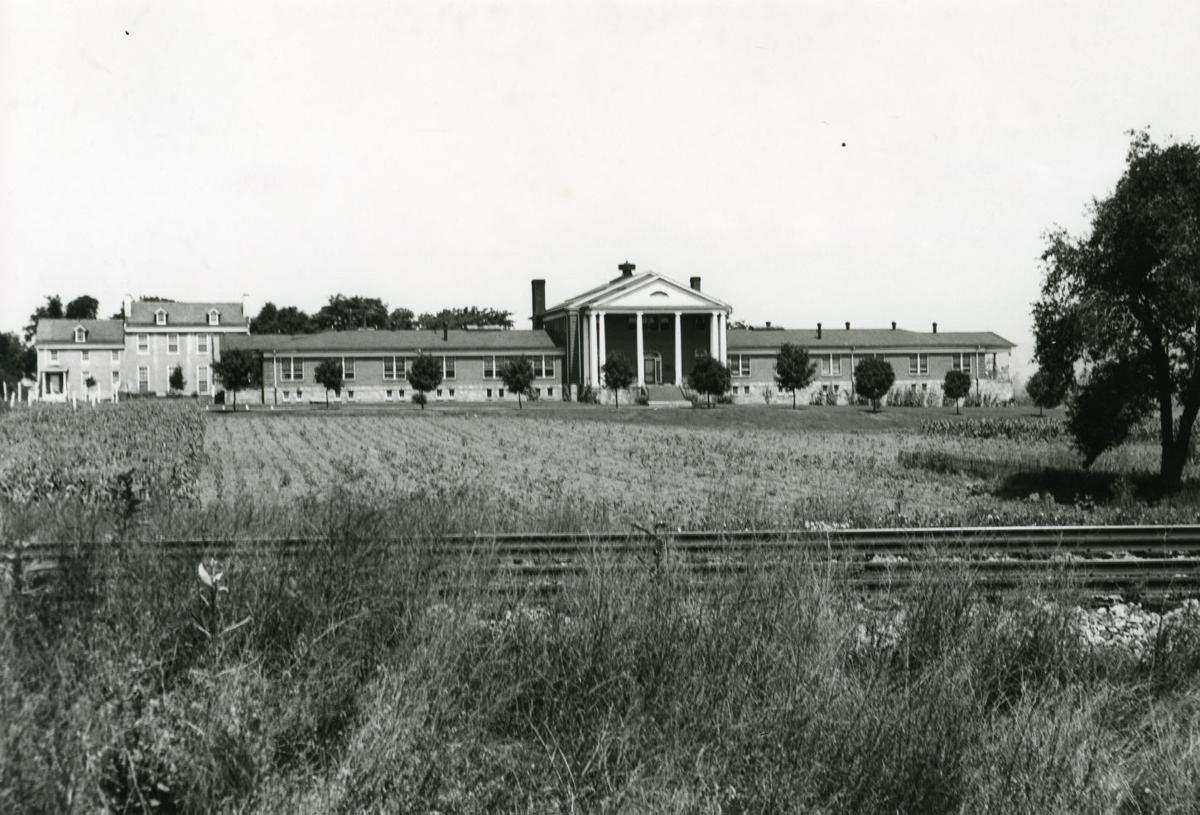 This photograph, date unknown, shows the “Women’s Home Building” of the Claremont County Home. The mansion of Edward Stiles is pictured on the left. 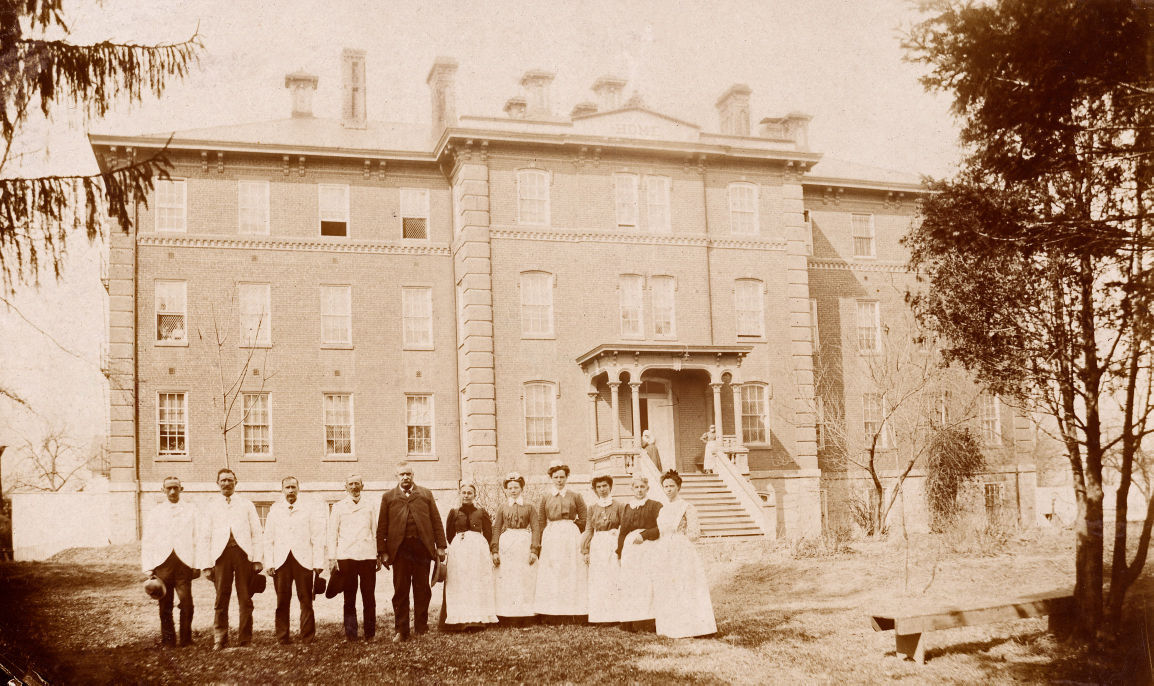 Staff line up in front of what was known as the “Old Hospital.” This structure was built in 1873. 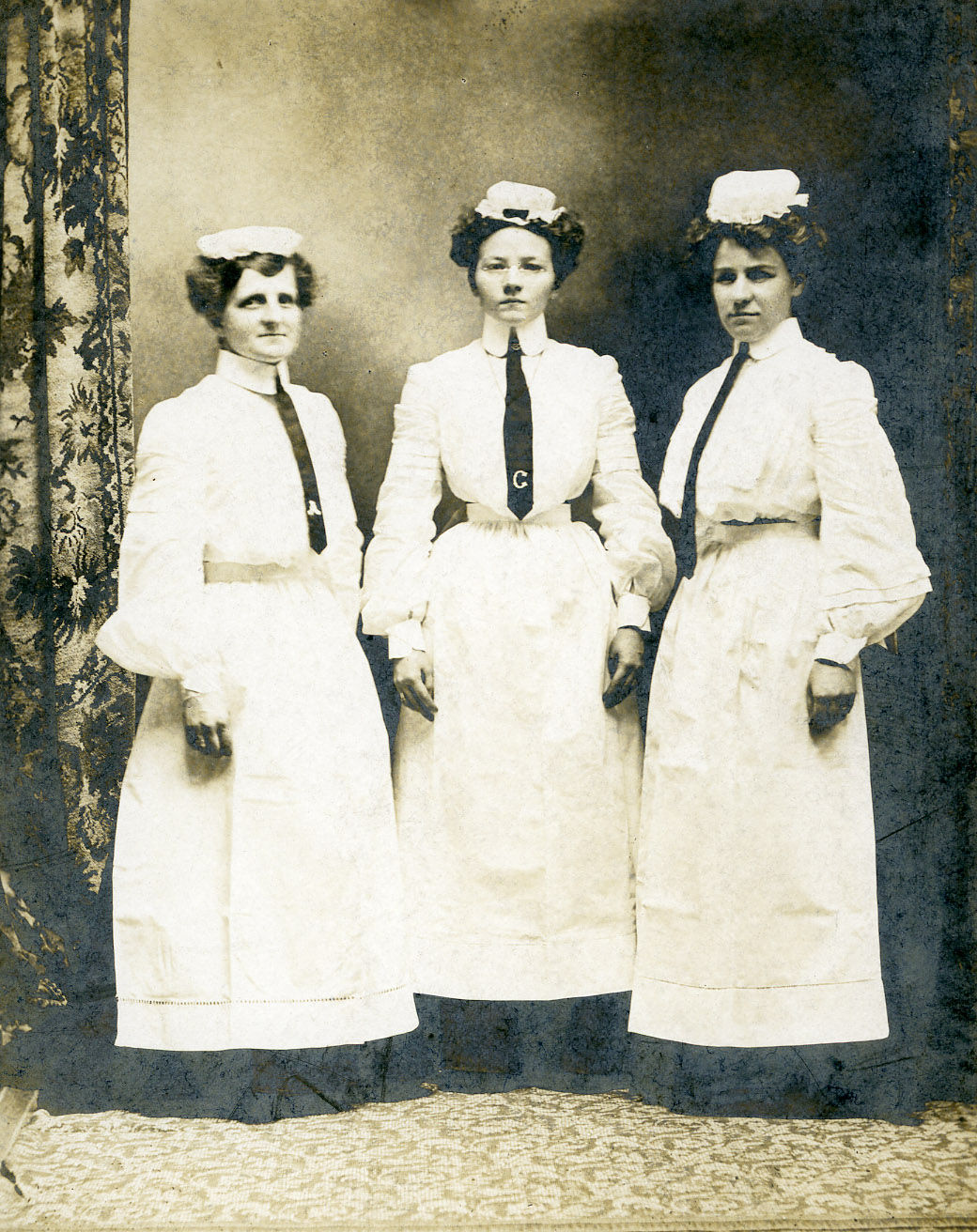 These nurses were employed by the Cumberland County home on the Claremont property around 1902-03.

MIDDLESEX TOWNSHIP – There is reason to believe the body of a world renowned wood carver is buried somewhere in an unmarked grave on the campus of the Claremont Nursing and Rehabilitation Center.

A penniless tramp that was violent when drunk, Wilhelm Schimmel died of stomach cancer while on the property in early August 1890 when it served as the host site of the Cumberland County poor house.

In life, Schimmel was seen often wandering the countryside armed only with a trusty penknife and one or more blocks of pine wood. He traded his carvings for pints of whiskey or sold his wares on local streets for a few pennies each.

It was only in death that Schimmel is recognized as an important figure in folk art with works that fetch thousands of dollars at auction and are on display in prominent galleries.

His story is only part of the colorful past behind the property now home to a 290-bed community-based nursing and rehabilitation center.

Early accounts mention how Jonathan Holmes had sold the property to John Holmes Jr., who became the county sheriff in 1765. Three years later, on Jan. 29, 1768, John Holmes was one of several local officials who confronted an angry mob of 70 to 80 armed men who stormed the county jail to free Frederick Stump and John Ironcutter – two mass murderers of local Native Americans.

In October 1789, Holmes sold the future Claremont property to Thomas Duncan who, at the time, ran the largest law practice outside of Philadelphia. Duncan was constantly at odds with David Watts, father of Frederick Watts, who was an early supporter of the Farmers High School, which eventually became Penn State University.

Duncan gained such prominence in the legal field that he was appointed an associate justice of the Pennsylvania Supreme Court in 1817. Two years later, Duncan either sold or gave property to his daughter, Ann, and son-in-law, Edward Stiles. This transaction was the earliest known record of the land being called “Claremont,” which was also the name of the Stiles mansion that stood until the 1950s when it was demolished.

In his 1944 book, “This is Carlisle,” local historian Milton Flower described Duncan and Stiles as having influence over the architecture of the downtown, which was going through a building boom between 1813 and 1825. Stiles was involved in the design of such buildings as the old Carlisle Deposit Bank Building, the Duncan-Stiles house at the corner of High and Bedford streets and the Penrose House.

The state General Assembly passed a law on Feb. 12, 1829 to establish a corporation and board of directors to oversee a Cumberland County poor house. That same year, the board paid Edward Stiles $13,250 for his stone mansion and about 200 acres for the purpose of developing a poor house.

The mansion became known as the “County Home” and served as the administrative building and living quarters of the facility superintendent. The board purchased 14 acres from William Holmes in 1838 and 80 acres from Andrew McDowell in 1842. A building to accommodate the mentally ill was constructed on the property in 1873 and later became the men’s dormitory.

The state assembly disbanded the county poor house board in 1936, turning the administration over to the county commissioners. Prior to that, the “Home Building” was constructed in 1921 to house both men and women before becoming a dormitory for women only.

In the early days, the Claremont facility served as a public almshouse offering shelter and services to the homeless, the disabled, the chronically mentally ill, newly released prisoners and wanderers. Over its history, staff had provided meals and a bed to such notables as Schimmel, fellow woodcarver Aaron Mountz and famed cornetist Parris Chambers, who also died at the home.

A working farm supported the home, providing fresh vegetables and meat for the residents from its beginning until the early 1980s. Residents of the home helped with such chores as planting and harvesting crops and milking the cows. A 1972 Sentinel story mentioned how the farm grew corn, onions, peas, tomatoes, cabbage, lima beans, hay, wheat and barley.

The site has been known by many different names over its history including the “old county home,” “Claremont Farms” and the “Cumberland County Nursing Home.” In the late 1990s, its name was changed to Claremont Nursing and Rehabilitation Center. Major expansions of the Claremont facility took place in 1959 and 1965.

A renovation completed in 2002 reduced the number of beds to 290, while increasing the overall floor space. That project included a 53-bed, state-of-the-art dementia unit, new kitchen and laundry facilities, redesigned semi-private rooms in the east wing, an administrative wing, landscaped gardens and an on-site child learning center offering intergenerational opportunities.

What do Cumberland County officials think about the stability of Claremont Nursing and Rehabilitation Center, and why are counties divesting themselves of their county-owned nursing homes.

The history of Claremont Nursing & Rehabilitation Center and its service to the county.

Finances of county-owned nursing homes and how they find funding.

No Christmas parade for Carlisle this winter, but other activities are planned

The parade was called off for 2021 due to funding cuts at the Downtown Carlisle Association, which organizes the parade.

COVID at Thanksgiving: How to talk to loved ones about virus safety

COVID at Thanksgiving: How to talk to loved ones about virus safety

This photograph, date unknown, shows the “Women’s Home Building” of the Claremont County Home. The mansion of Edward Stiles is pictured on the left.

Staff line up in front of what was known as the “Old Hospital.” This structure was built in 1873.

These nurses were employed by the Cumberland County home on the Claremont property around 1902-03.