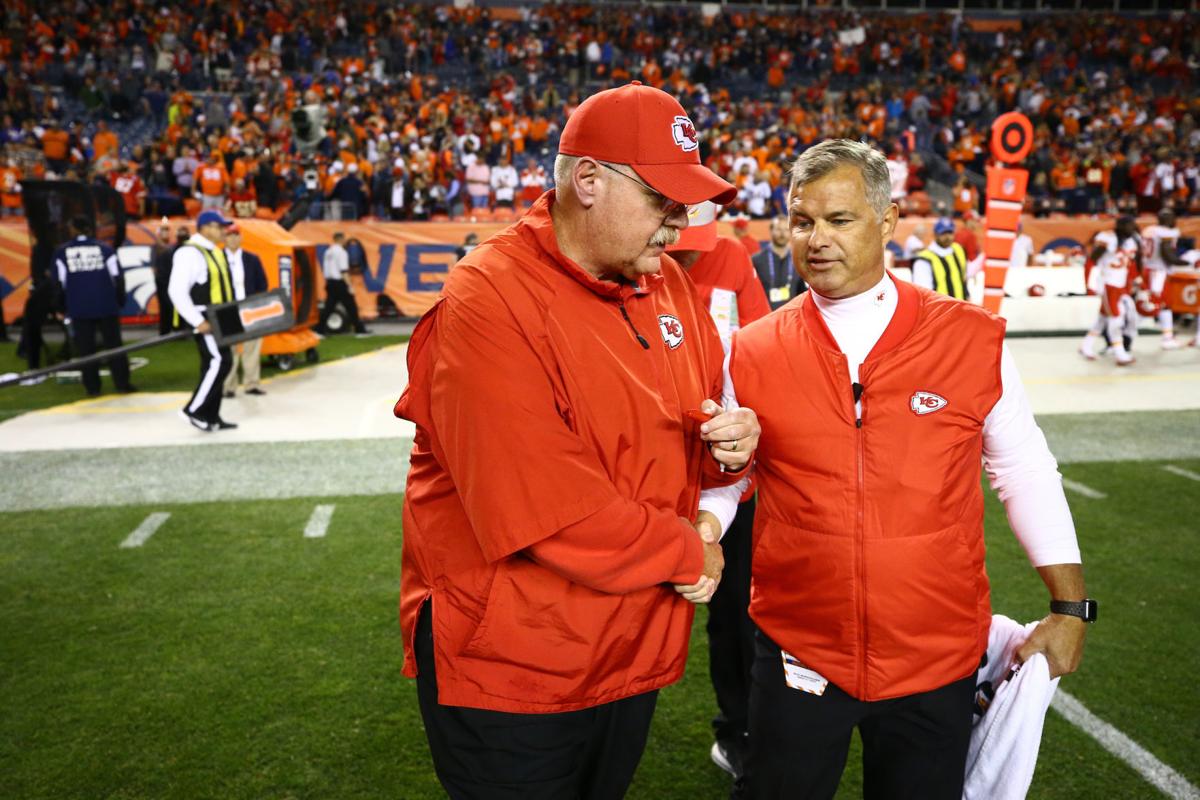 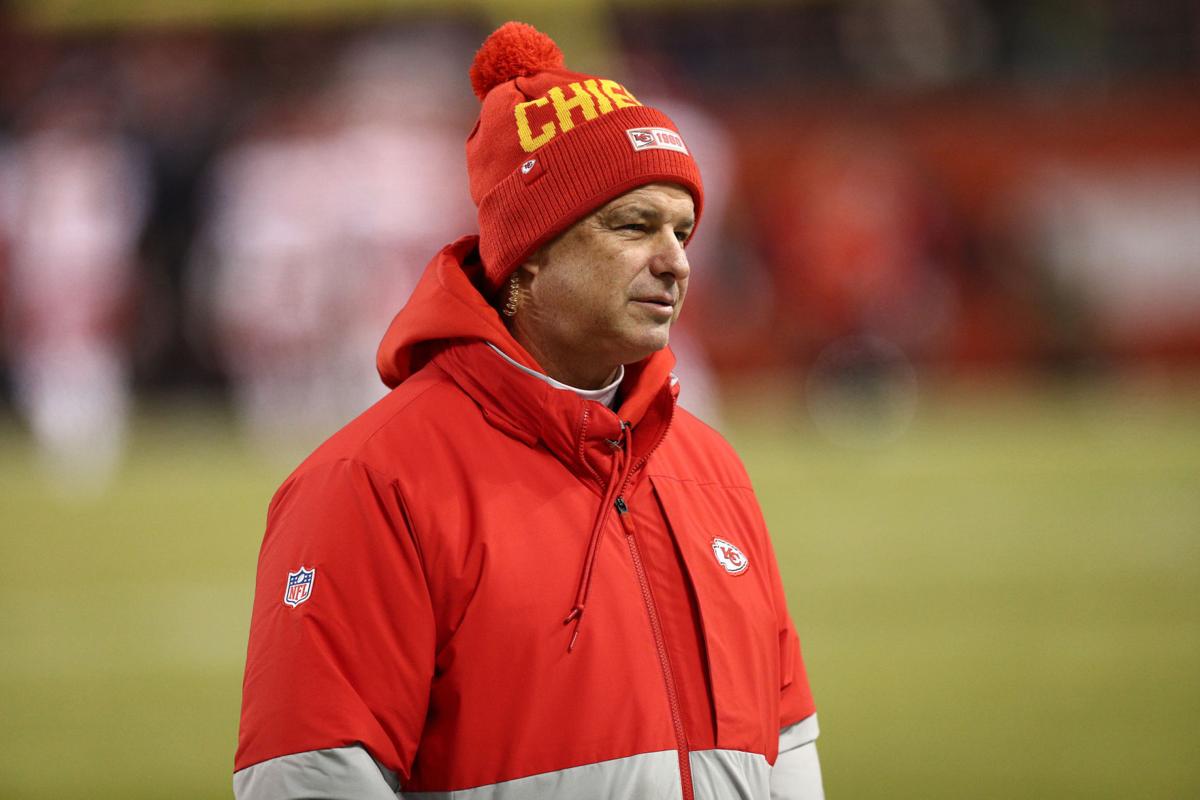 Vice President of Sports Medicine and Performance Rick Burkholder, a Carlisle native, during the game between the Kansas City Chiefs and the Chicago Bears at Soldier Field in December.

It might happen when Demi Lovato hits the soaring notes of the national anthem. It might come during the coin toss or when fireworks light up the sky as his players take the field at Hard Rock Stadium in Miami.

He doesn’t know when, but Rick Burkholder knows that at some point Sunday during Super Bowl LIV as he stands on the sideline in his role as the vice president of sports medicine and performance for the Kansas City Chiefs, he’s going to think about home.

“I’ll be thinking about all my peeps in Carlisle. I love them. I love everybody back there. I don’t get back enough, but it’s special to me,” he said Wednesday.

Burkholder closes out his 27th season in the NFL with this Sunday’s Super Bowl. He joined the training staff of the Pittsburgh Steelers in 1994 before taking on his first head athletic trainer position in 1999 with the Philadelphia Eagles under freshly hired head coach Andy Reid.

That was the beginning of a partnership that continued when Reid joined the Chiefs as head coach in 2013.

“It’s been a good week so far. We’re all starting to get amped up for Sunday,” Burkholder said.

It might be counterintuitive, but Burkholder said the time leading up to the Super Bowl has been more relaxed than usual for a training staff that worked every day — with no weekends off — since July 21.

“As a group, we’ve been at it. We’ve had some big injuries this year that took a lot of our time and we do a lot of extra stuff with soft tissue work and corrective exercises, but this week has been one of the easier ones for us because we’re not injured,” Burholder said.

Offensive tackle Eric Fisher’s eight weeks off with a groin injury and receiver Tyreek Hill’s shoulder injury that sidelined him for four weeks certainly qualify as “big injuries,” but Patrick Mahomes’ late October knee dislocation is the one that panicked fans.

He acknowledged that video of the injury looks terrible. After all, he said, it’s the “best player in the league and his kneecap is facing the other way.”

Knowing Mahomes’ risk factors and “how he’s biomechanically designed,” Burkholder was confident Mahomes trusted the training staff and would put in the time to do what he needed to do to get back to the game. Mahomes ended up coming back just about as early as an athlete could from such an injury.

“The hardest thing to deal with him was I had to protect him from him,” Burkholder said. “He wanted to play that night in Denver. That’s part of my job. My No. 1 job is to protect these athletes and then second, help them perform.”

The team and its personnel are ensconced in a Miami hotel this week. Instead of a 30-minute commute every morning and evening, Burkholder walks down the hall from his room to get to the athletic training room set up in the hotel.

“It’s been fun because they’ve got us in this hotel, kind of isolated from everybody else, and it’s just the guys that we’ve worked on all year and kind of ground out the season with and the coaches we all love,” he said.

It’s been a time of real bonding for the team as well as for the coaching and operation staff members.

“I feel very close to this group right now and feel like we’re primed and ready to win a championship together and then celebrate together all of next week,” Burkholder said.

Conventional wisdom in the NFL is that a Super Bowl win as head coach is the one thing standing between Reid and a spot in the Pro Football Hall of Fame. There are many who think Reid gets in even without the championship ring.

Still, a ring would seal the deal.

“Everybody in the organization wants to win this for Andy. Everybody but Andy. Andy wants to win it for everybody else,” Burkholder said, calling Reid a “fatherly and grandfatherly” figure for the players and staff.

Reid’s tenure in the NFL has been an incubator for coaching talent with a number of his proteges going on to successful head coaching careers in their own right, most notably current Eagles head coach Doug Pederson, who led the Eagles to their first ever Super Bowl win in 2018. Counting his years as an assistant coach, Reid has been in the playoffs 20 times, conference championship games nine times and the Super Bowl three times, according to the Chiefs website.

He was head coach for one of those Super Bowl appearances, the Eagles loss to the New England Patriots in 2005.

“[Reid is] a great human being as well as a great coach. We want to win it for him, but we’ll celebrate with him. We’ll put our name on that championship, too,” he said.

Burkholder takes a low-key approach to his third Super Bowl week. Dinner with the staff was planned for Wednesday, and his family was scheduled to arrive Friday.

“I’m not a going-out guy right now in this stage in my career. It’s not like we’re going to the beach or down to the NFL Experience or anything like that,” he said. “We’re just hanging out up here, getting our job done. Our excitement will be Sunday and hopefully, Monday, Tuesday, Wednesday next week.”

It’s an approach that comes with age.

When he went to the Super Bowl in 1995 with the Steelers, the players were “21-30 years old,” Burkholder said. It was the same thing in 2005 when he reached the Super Bowl with Philadelphia.

Musing that society would be “a little happier” if it were more fulfillment driven than achievement driven, Burkholder said he focused on “winning the ring and championship” in his first two Super Bowls. Now, he’s focusing on his job and finding a sense of fulfillment in doing something few people can do. At the same time, he’s driven by the fact that he’s experiencing the very thing he’s wanted to do for his whole life.

“Certainly, I want to win a world championship Sunday and that will be icing on the cake, but this whole NFL life and experience has been fabulous for me. I’m very fulfilled and this week is very, very fulfilling,” he said.

No quit in them: Burkholders still going strong in 'fourth quarter' of their athletic training careers

Burkholder’s work has placed him at the pinnacle of his profession.

He’s served as president of the Professional Football Athletic Trainers Society, focusing on gender equality among the NFL’s athletic trainers and the importance of trainers at the youth and high school levels during his three-year tenure.

He’s a member of the Pennsylvania Athletic Training Hall of Fame, and has been honored with the National Athletic Trainers’ Association’s Most Distinguished Athletic Trainer Award and their President’s Award, which honored his contribution to the profession.

He’s been honored with the Pennsylvania Athletic Trainers Society Distinguished Merit Award and, along with his father, was named a distinguished alumnus of Carlisle High School.

Burkholder knows his parents, Richard and Nancy, are proud of what he’s accomplished, but he’s quick to turn the spotlight on them.

He points to his father, “Burkie,” and his trailblazing work in bringing a sports medicine team to Carlisle and developing it to have a three-member staff at a time when only 38% of high schools have any program at all.

And, he adds, he admires Richard and Nancy’s 60-plus years of marriage.

That admiration has been passed down to the third generation of Burkholders as he and his wife Kristine’s daughters — Quinn and Carly, both teenagers — are getting older and feeling the same way about Burkholder as he does about his dad.

“They’re proud. They’re happy. They’re excited to come down to the Super Bowl, but they’ve told me all week, ‘I love you and I’m so proud of you.’ They’ve never said that before,” he said.

This story never would have happened without an email from our sports editor, Jake Adams, that started with the line, "It's a long shot, but ..."

Vice President of Sports Medicine and Performance Rick Burkholder, a Carlisle native, during the game between the Kansas City Chiefs and the Chicago Bears at Soldier Field in December.