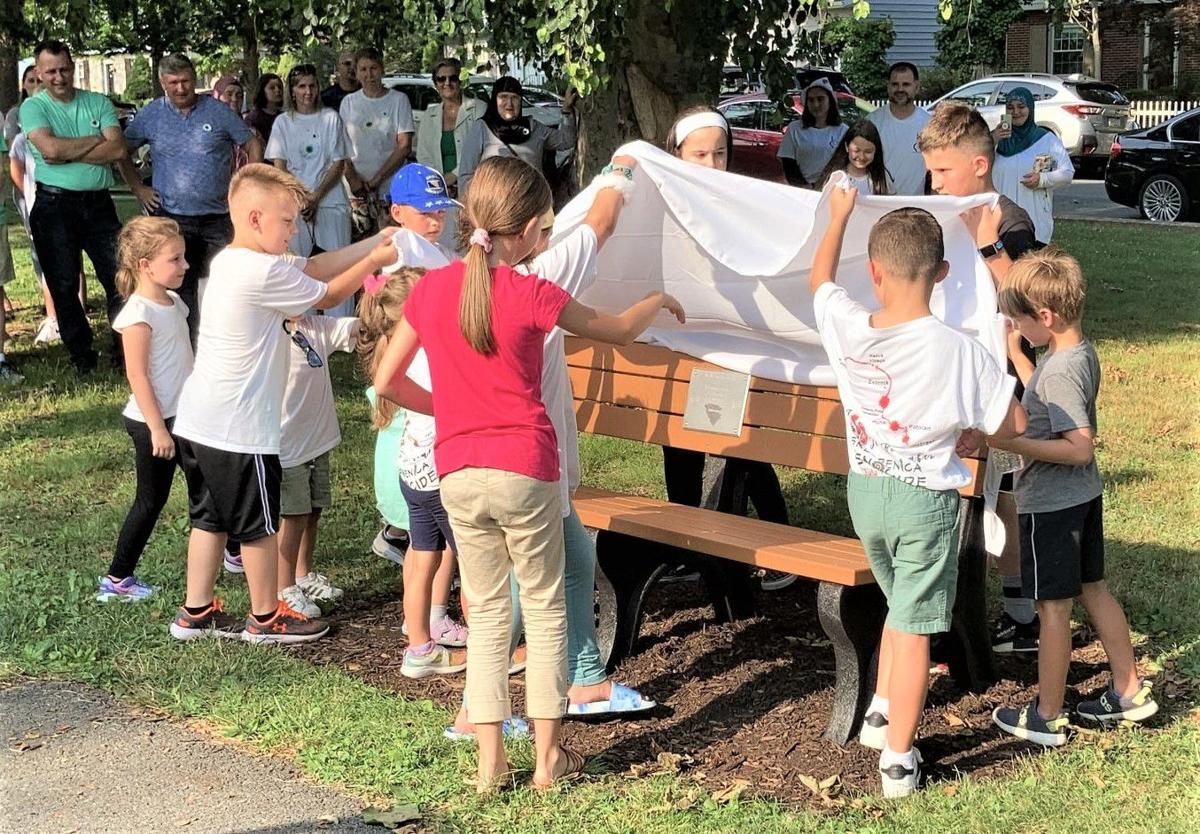 Children from the Bosniak Islamic Cultural Center unveil a bench in Carlisle's Lindner Park that has been dedicated to the memory of 8,372 Bosnian men and boys killed in the genocide at Srebrenica on July 11, 1995. 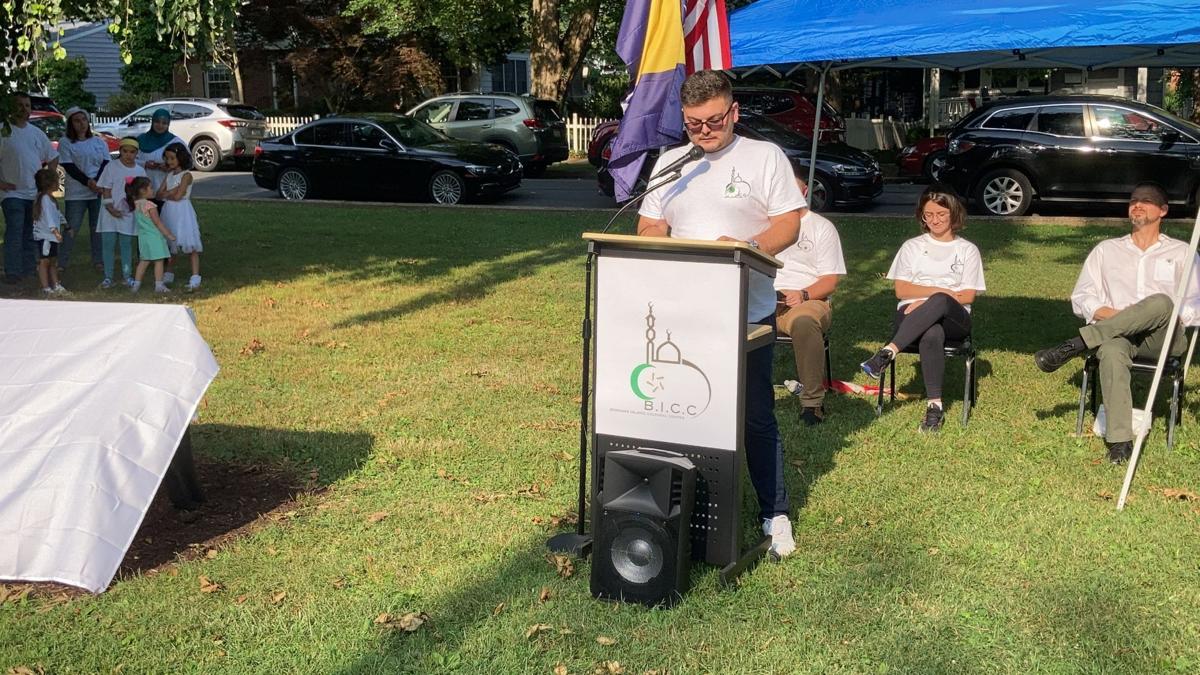 Bedrudin Becirovic speaks at an event in Carlisle's Lindner Park remembering the the genocide at Srebrenica on July 11, 1995. 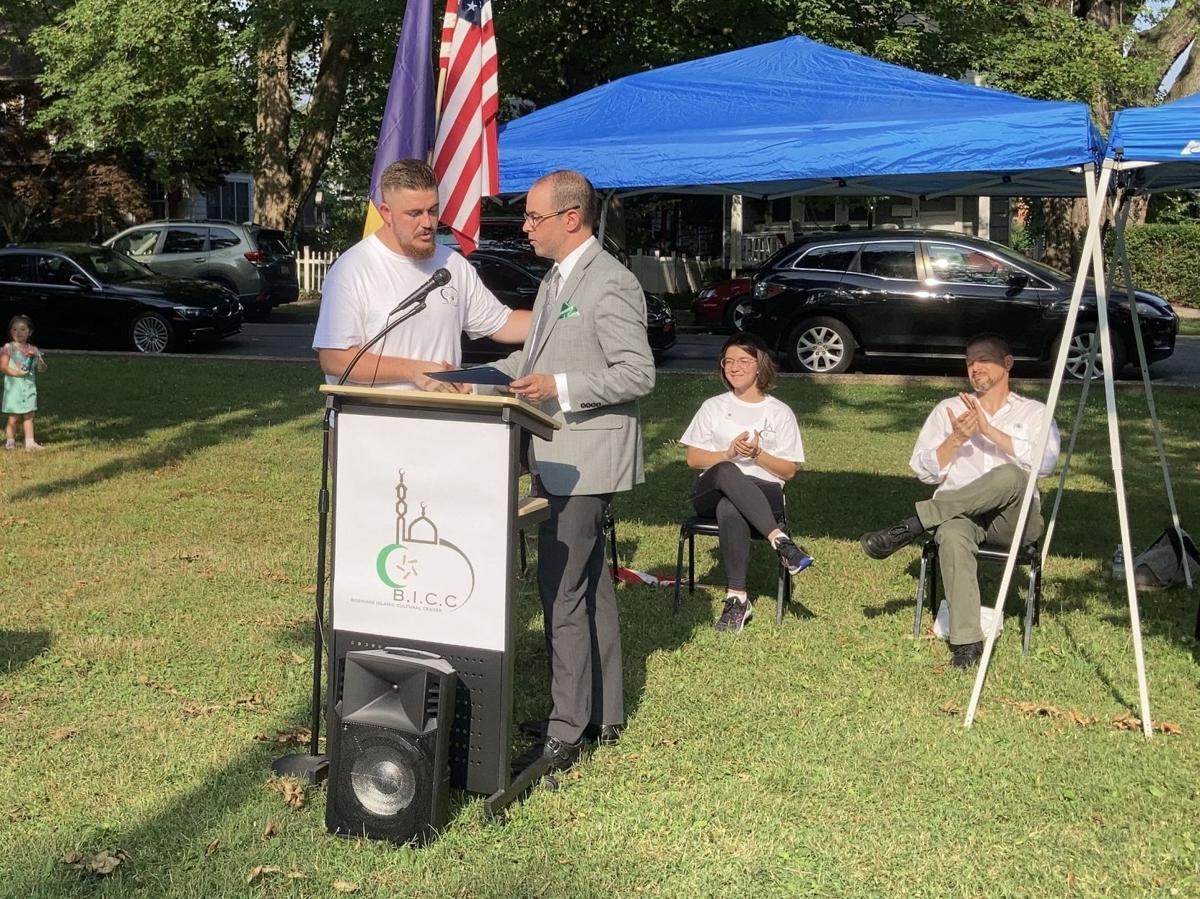 Carlisle Deputy Mayor Sean Shultz, right, presents Zinaid Granic, the imam of the Bosniaks Islamic Cultural Center, with the proclamation declaring Sunday to be Srebrenica Remembrance Day and the week of July 11 to be Bosnia-Herzegovina Tribute Week.

His grandmother and his aunt, who was only 13, were killed together. Though he had to use a cane to get around, Becirovic’s grandfather was among the 8,372 Bosnian men and boys killed at Srebrenica.

Sunday afternoon, on the 26th anniversary of the July 11, 1995 massacre, the Bosnian Islamic Cultural Center invited members of the Carlisle community to join them in a commemoration event that included a one-mile walk around the neighborhoods near Lindner Park.

The event included the unveiling of a memorial bench honoring the victims of the genocide. Carlisle’s Deputy Mayor Sean Shultz also shared a resolution passed last week by the borough council that declared Sunday to be Srebrenica Remembrance Day and the week of July 11 to be Bosnia-Herzegovina Tribute Week.

“Srebrenica challenges us to choose who we will be and search for kindness, compassion and humaneness within ourselves,” he said.

Zinaid Granic, the imam of the Bosniaks Islamic Cultural Center, welcomed about 100 people to the event that started with a short ceremony to remember the genocide and to look to the future.

“We are here, and we are grateful to the entire community of the city of Carlisle for the support they have given us,” he said.

Granic urged people to stop to think about the deaths of 8,372 people, and called on them to pray that genocide like what occurred in Srebrenica would never happen again.

“It doesn’t matter what tradition you come from, what religion you have, what culture you were brought up in. All you have to do is be a human being before anything else,” he said.

Karl Qualls, a history professor, said the genocide can’t be simplified to the acts of just a few leaders.

“It took thousands of men and women complicit, either acting directly or indirectly, to allow mass murder on this scale to happen,” he said. “Moreover, hundreds of thousands remained complicit in denying the genocide, either suggesting it never happened or making false equivalencies.”

Qualls said there are clear signposts of a gathering trend toward genocide, starting with political leaders spreading hate through media to encourage mass murder. In Bosnia, Serb leaders dehumanized Bosniaks by comparing them to animals, insects and infections.

“It is only a small step from words of hate marking groups as ‘not us’ to followers acting on those words and attacking their neighbors,” he said.

Brenda Landis, a member of Carlisle Borough Council, talked about the ways the Bosnian community have shared their stories and culture in their workplaces and schools.

“We are honored that you keep welcoming the community. In return, we should all continue to learn, keep an open mind, and especially open arms to the refugees who need to call Carlisle home in the future,” she said.

The story of the refugees past and future are reflected in Becirovic’s story.

Becirovic thought he had one picture of each of his lost family members in the stories he heard about them. He’s realized since that he has so much more in his parents, who risked everything to come to a place they knew little about and have become what his grandparents envisioned many years ago.

“They taught me what it meant to be a productive member of society, what it means to respect everything around you, how to live in a place where you weren’t born but would become a part of and how to retain your roots far away from home,” he said. “That place became Carlisle, and Carlisle, I thank you for it.”

Children from the Bosniak Islamic Cultural Center unveil a bench in Carlisle's Lindner Park that has been dedicated to the memory of 8,372 Bosnian men and boys killed in the genocide at Srebrenica on July 11, 1995.

Bedrudin Becirovic speaks at an event in Carlisle's Lindner Park remembering the the genocide at Srebrenica on July 11, 1995.

Carlisle Deputy Mayor Sean Shultz, right, presents Zinaid Granic, the imam of the Bosniaks Islamic Cultural Center, with the proclamation declaring Sunday to be Srebrenica Remembrance Day and the week of July 11 to be Bosnia-Herzegovina Tribute Week.