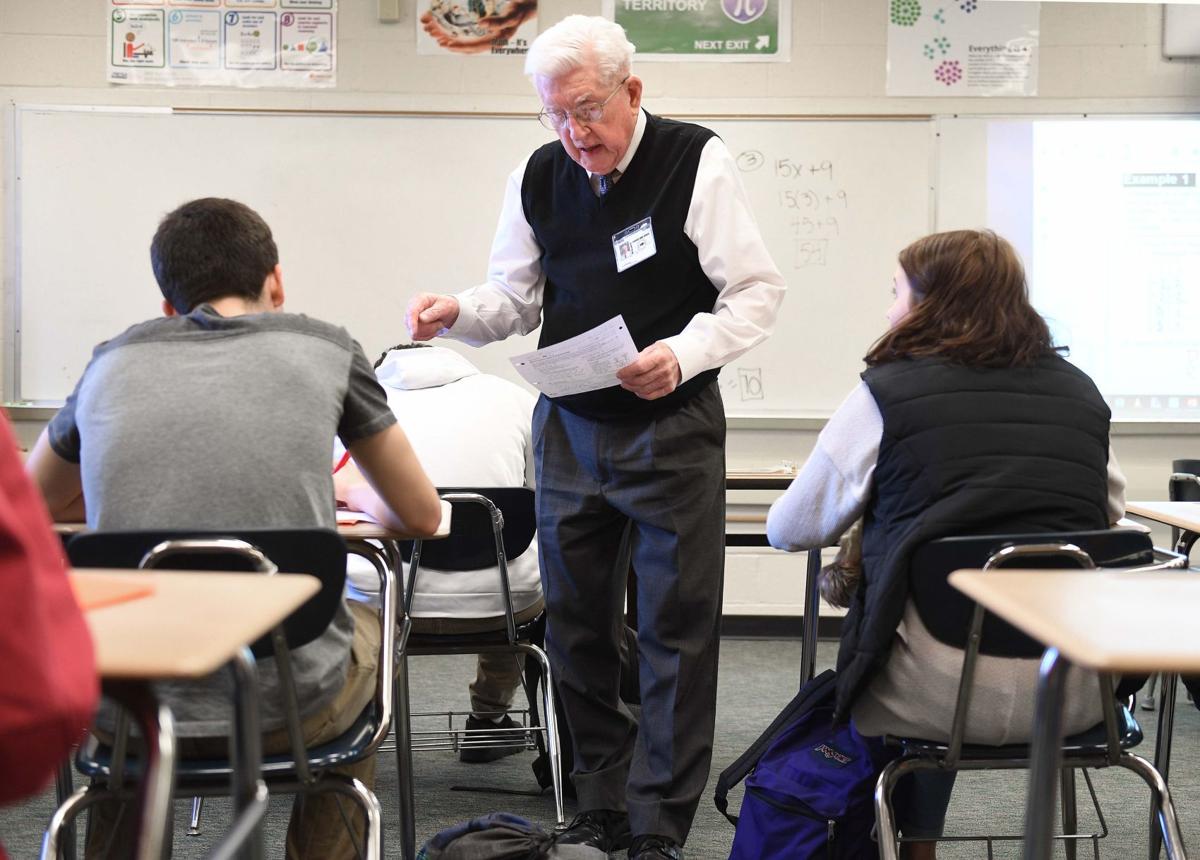 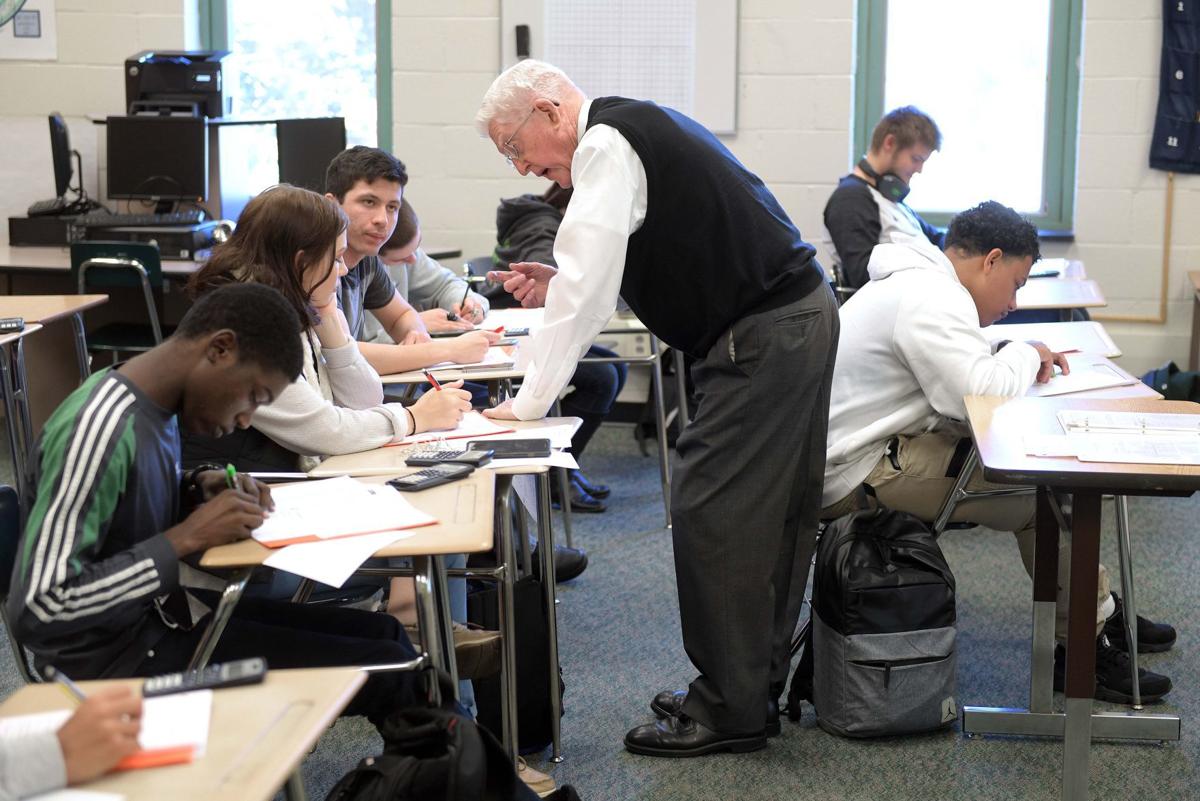 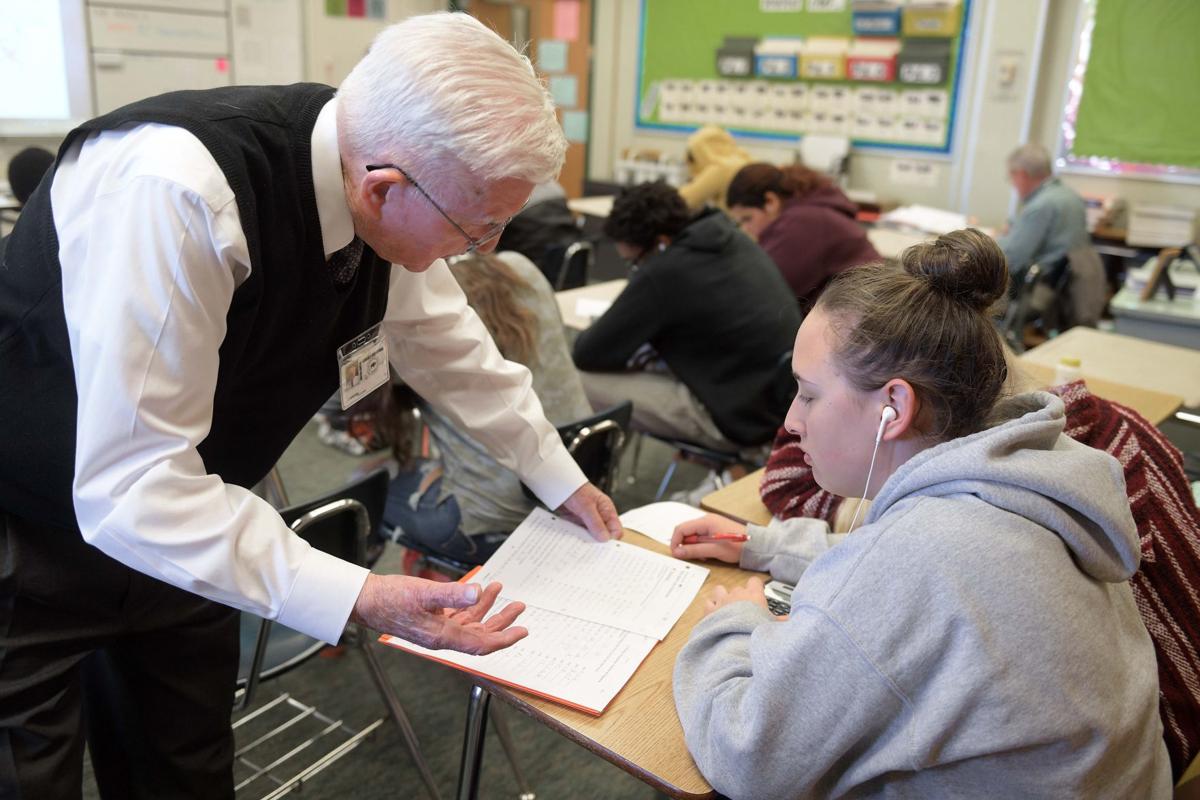 There is a simple equation to explain the choice Al Speers made in retirement.

Almost every day school is in session, Speers is in the classroom working five out of the seven class periods on the daily schedule.

In the role of tutor on standby, Speers works directly with three teachers, ready to step in to provide one-on-one attention when a student calls him over.

“I met him the first day I started here,” math teacher David Bigelow said. “He has been in at least one of my classes every year. What’s really special is there will be some students who have a connection with Mr. Speers. They gravitate toward him.”

Much of the one-on-one time takes place after Bigelow completes a lecture and assigns the students a set of math problems to solve. The greatest impact has been with youths who tend to struggle the most with math. Just by being there, Speers has helped students succeed and press on to graduation, Bigelow said. And there is no stopping the late-model octogenarian.

“It’s incredible,” Bigelow said. “I can’t think of too many people who would do that. It gives him a greater purpose for his life and you see that the students really love it.”

“I have to have structure in my life,” Speers said. “I need to do something. I owe the Carlisle School District a great deal for helping me out by taking me back. I was a real prodigal son.”

A native of Ridley Park, a Philadelphia suburb, Speers moved to New Cumberland at an early age and calls that borough his hometown. He earned a degree in agriculture from Penn State University.

In the 1950s, Speers only needed to take a few additional courses to be certified as a math teacher. In September 1966, Carlisle hired him to teach math in what is today the David R. Swartz building.

“Over the years, I would get downhearted,” Speers said. He would ask himself if the curriculum material was what his students really needed and whether he was capable as a teacher to deliver it properly. This second-guessing prompted soul-searching that led to a number of resignations from the Carlisle Area School District.

The first came after Thanksgiving Day in 1971 when Speers quit teaching to pursue a degree part-time from the Lutheran Theological Seminary in Gettysburg. To support his family, Speers worked as a sexton and as director of Christian education at the Second Presbyterian Church in Carlisle.

Rather than continue in the ministry, Speers returned to Carlisle Area School District to finish out the year for a math teacher who had left the district in the spring. He then worked as the home school visitor for two years before taking on the job of a math and science teacher for the Alternative Learning Program.

The program offered off-site instruction to students who had difficulty functioning in a traditional classroom setting. “In those days, we rented part of the Thornwald Mansion and the second floor of the Carlisle Theatre,” Speers said. He later returned to the classroom as a math teacher in the high school.

In 1985, Speers left the school district again — this time to work another job for about two years. He then returned to Carlisle High School where he continued to teach until his retirement in January 1996.

“My wife was ill,” Speers said. “The end of the [first] semester was a good time to go.”

In 1998, he started volunteering in learning support math classrooms at Carlisle High School. While his wife was alive, Speers would work two to three class periods in the morning, keeping his afternoon open to spend quality time with his wife and to run appointments and errands.

He continued this pattern until September 2010 when his wife died. The next day, he was at the high school to ask what he could do next to help Carlisle students.

“I didn’t need to sit home and grieve,” Speers said. Instead he wanted to step up his volunteer work and continue to feel productive. Aside from Bigelow, Speers works with math teachers Kelly Brent and Jennifer Barnhart.

He enjoys the flexibility of being able to work with students one-on-one in the classroom or pulling them aside if they need extra help to catch up after being absent for an extensive time.

“I have seen him work with students after school if they ask for extra help,” Bigelow said. “He gets to know them. He has even written birthday cards for students.”

John Holbert of Upper Allen Township was superintendent of Carlisle school district from 1973 to 1976. During that time, Holbert hired Speers as a math teacher after one of his periods away from the high school.

“He is very compassionate. He looks forward to volunteering, Holbert said.

Holbert and his wife became close friends with Speers and his wife through their common association with the Second Presbyterian Church. Now widowers, the men have dinner each week at the Walnut Bottom Diner where they reminisce and keep the friendship going.

“He was one of my better hires,” Holbert said of Speers. “He has helped a lot of kids through tough times. They might not have made it through normally. There are students who even now seek him out to remind him of the impact he had on them.”

Speers is helping the grandchildren of the students he had in the regular classroom. He has a total of 53 years in education — 32 as a paid teacher and 21 as a volunteer. Forty-six years of that service has been with the Carlisle Area School District.

In all that time, Speers had to grapple with the question of whether math curriculum should do more to address the practical side of life — how to budget, calculate interest and keep tabs on a credit card.

All too often, math today seems to be geared toward what is necessary for the state assessment test, Speers said. He did agree, however, with the increased emphasis on teaching students critical thinking skills.

The Exchange Club of Carlisle in June announced it has selected its Youth of the Year from three local high schools.

“Without the support of United Way, it would have been nearly impossible to run our program properly,” said Jeanna Som, the part-time director of SPY.