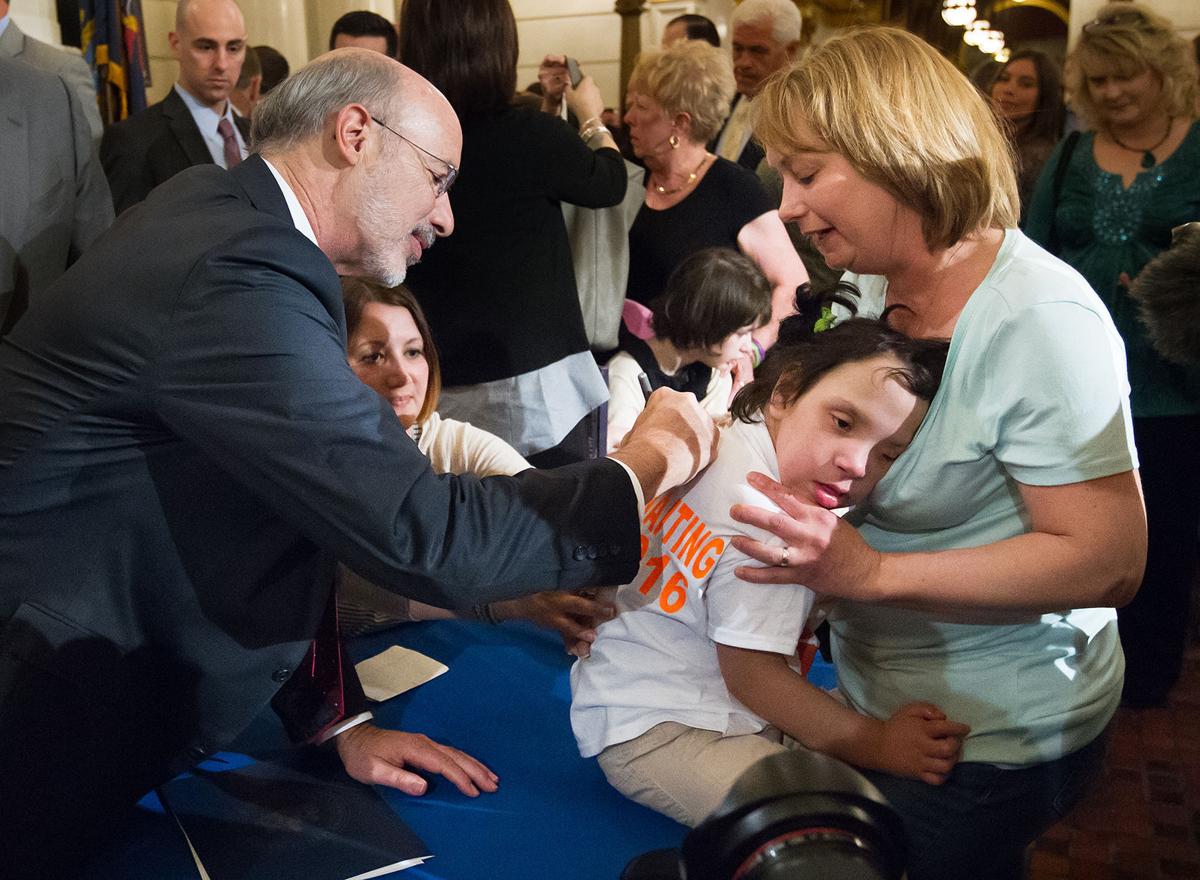 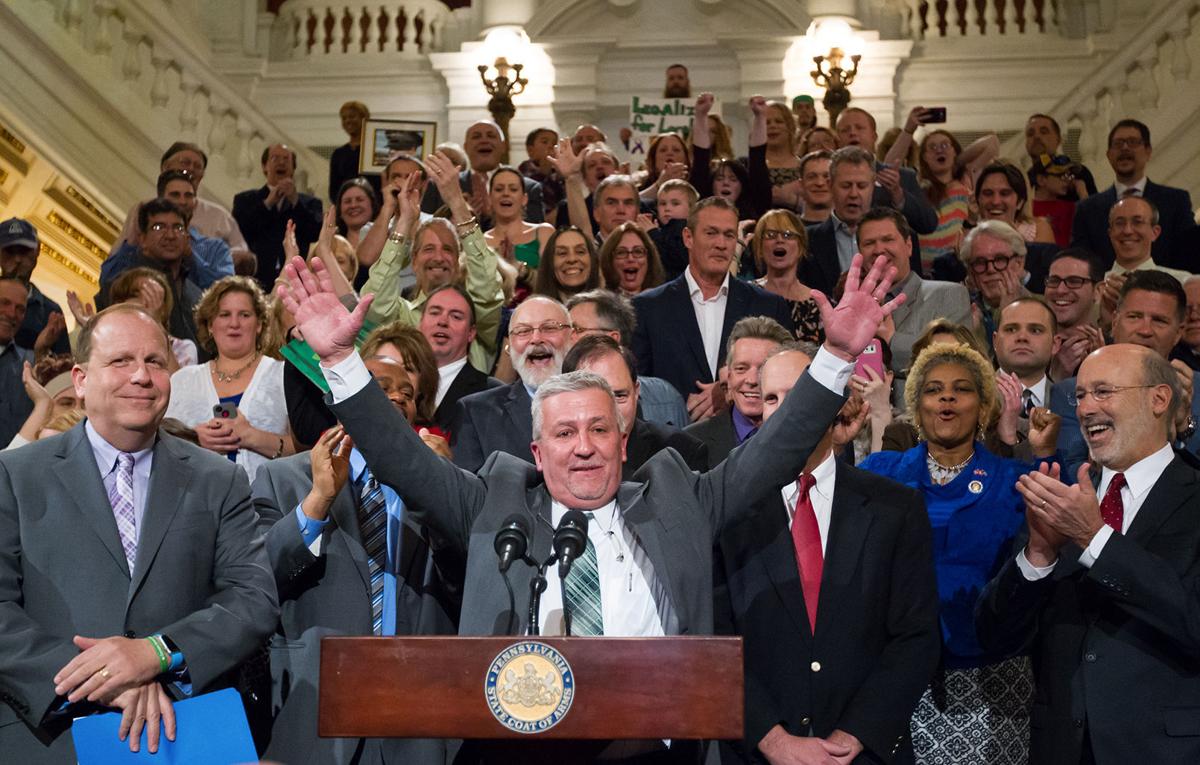 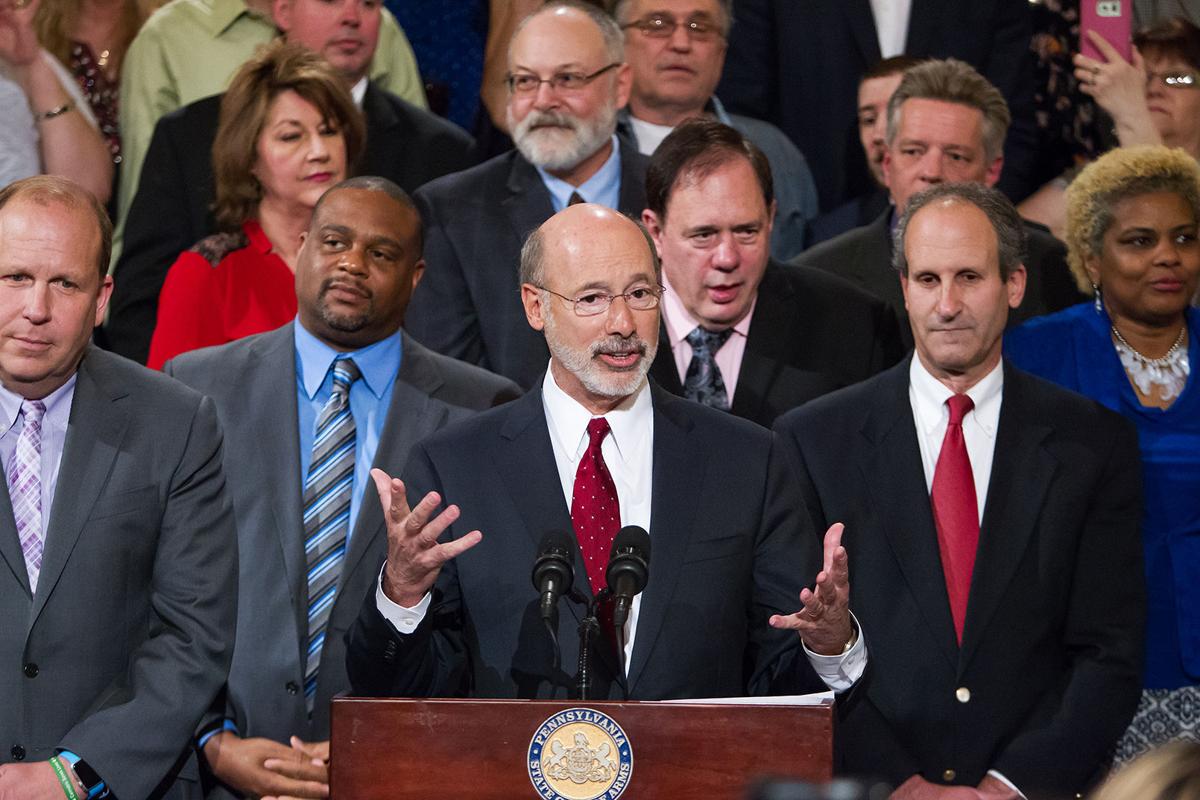 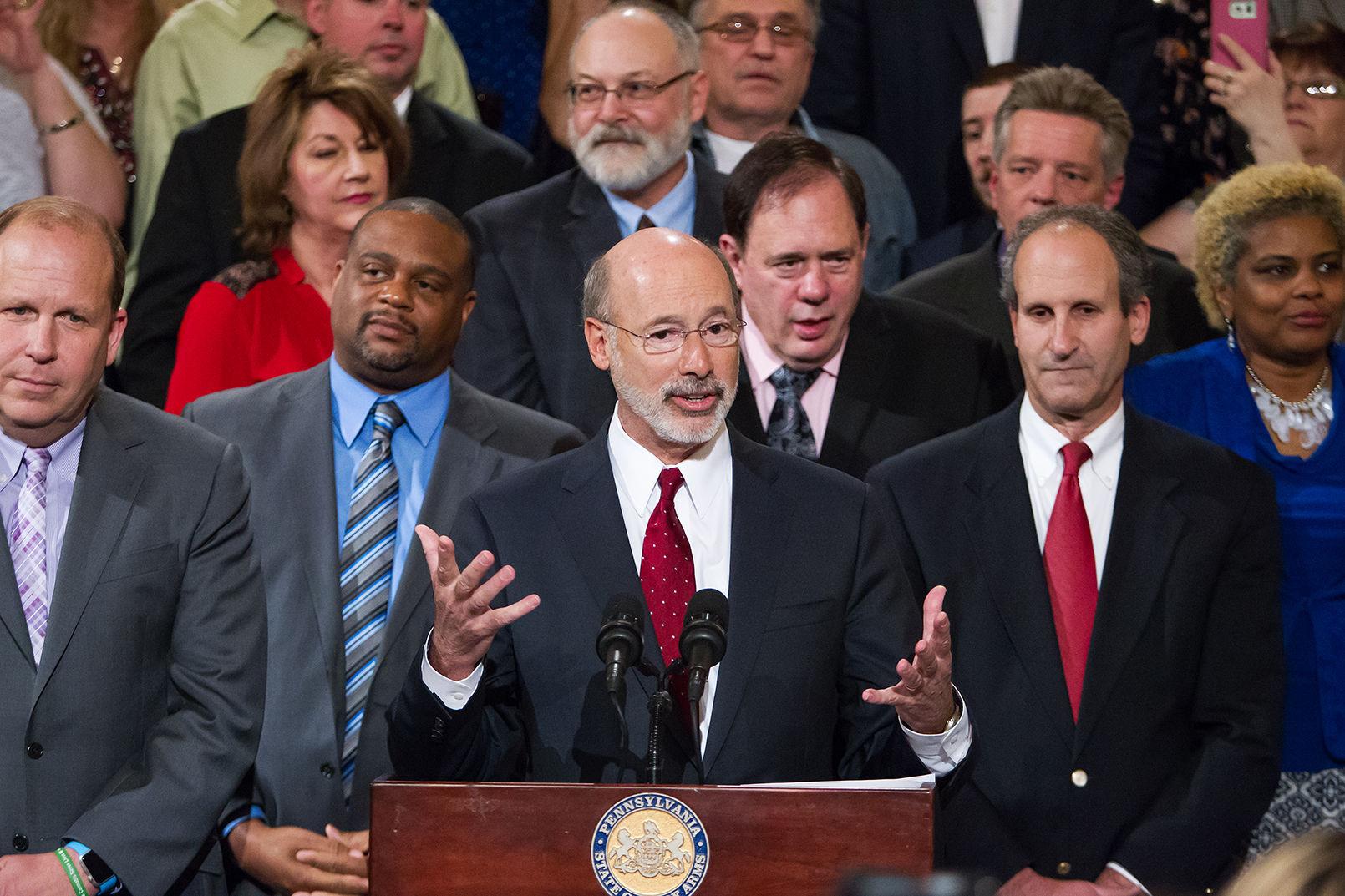 Gov. Tom Wolf has a lot of high hopes for the upcoming budget process, and claims the budget can be balanced without broad tax increases.

“The high level headline is that Pennsylvania joined one of 23 other states and the District (of Columbia) in legalizing the use of marijuana for medical uses only,” said Dan Clearfield, a lawyer of Eckert Seamans Cherin and Mellott in Harrisburg.

The decision was heralded by advocates who lobbied hard for the passage of the law, but what now?

In simple terms, doctors will be able to prescribe certain forms of marijuana to patients who meet some general requirement and are suffering from one of the approved medical conditions.

Medical marijuana may only be prescribed in pill, oil, topical, tincture (liquid extract) and liquid form or any form “medically appropriate for use in a vaporizer or nebulizer” other than dry leaf.

To be clear, the dry leaf form of marijuana, as well as smoking it, is currently and expressly banned under the law.

Small details included in the bill are why State Rep. Stephen Bloom, R-Carlisle, voted against it. He’s of the opinion that the bill is rife with loopholes that could potentially be exposed and abused. At the same time, Bloom said he was in favor of “making the medicinal compounds in marijuana available for properly supervised clinical use.”

“With all the problems we already face involving the epidemic of opioids and other drugs, I hate to see us opening another door to misuse when we could have been more careful and cautious to protect our kids and communities,” he said. “That being said, the bill did pass and will now be the law of the Commonwealth, so I hope the outcomes turn out as well as the medical marijuana advocates have been promising, and I will certainly be observing the process of implementation closely.”

Within two years an advisory board comprised of representatives from law enforcement, medical professionals, patient advocates, the Governor’s office and the state legislature, will provide recommendations for moving forward, including whether or not there is an acceptable way to use dry leaf marijuana for vaporization.

Many of the bill’s opponents tried to include preventive caps on the level of THC — the psychotropic compound responsible for most of marijuana’s psychological effects — but the caps were not in the final bill, nor were common-sense workplace safety restrictions or even limits on distribution near schools, according to Bloom.

“It’s always harder to fix a problem once it happens than prevent a problem before it starts, so passing corrective legislation as problems and abuses arise will be an ongoing challenge and, unfortunately, some people could end up worse off in the interim,” he said. “It’s a matter on which we will all have to remain vigilant.”

The Sentinel reached also reached out to State Sen. Pat Vance, but a representative from her office said she was not available for comment.

Vance voted against the bill.

While the law was enacted this month, it may be more than a year before patients can begin receiving medical marijuana.

“There’s a very detailed regulatory process that’s been created,” Clearfield said. “Medical marijuana that’s used in Pennsylvania, has to be from Pennsylvania. It has to be grown here. It has to be processed here and it will be tracked from cradle to grave, from seed to use.”

All of this regulation takes time.

“The process itself of creating regulations and dispensing licenses is probably going to take; we’re estimating a best case 12 to 13 months and probably 18 months before licenses are issued,” he said.

Each person involved in the process — growers, doctors and dispensaries — must be licensed or approved by the state and will have to meet certain criteria, like not having a conviction for a drug crime, to obtain those licenses.

Anyone with a conviction for certain drug-related crimes may also not be financial backers in a medical marijuana business.

For patients and their caregivers, regulations will be developed for the issuance of identification cards.

The rules for this step of the process have also yet to be developed, however by law an application that includes basic information about the applicant and certification from a practitioner to the need for medical marijuana, will also be required.

The identification card is good for one year and allows the patient or caregiver to obtain medical marijuana from a licensed dispensary.

Caregivers with a recent drug-related conviction are prohibited under the law.

Only a 30-day supply may be obtained at one time, according to the law.

Packaging for medical marijuana will include information about the contents and carry a warning label that reads “This product is for medicinal use only. Women should not consume during pregnancy or while breastfeeding except on the advice of the practitioner who issued the certification and in the case of breastfeeding, the infant’s pediatrician. This product might impair the ability to drive or operate heavy machinery. Keep out of reach of children.”

Sheriff: No evidence of impairment in Woods crash

Sheriff: No evidence of impairment in Woods crash

Gov. Tom Wolf has a lot of high hopes for the upcoming budget process, and claims the budget can be balanced without broad tax increases. 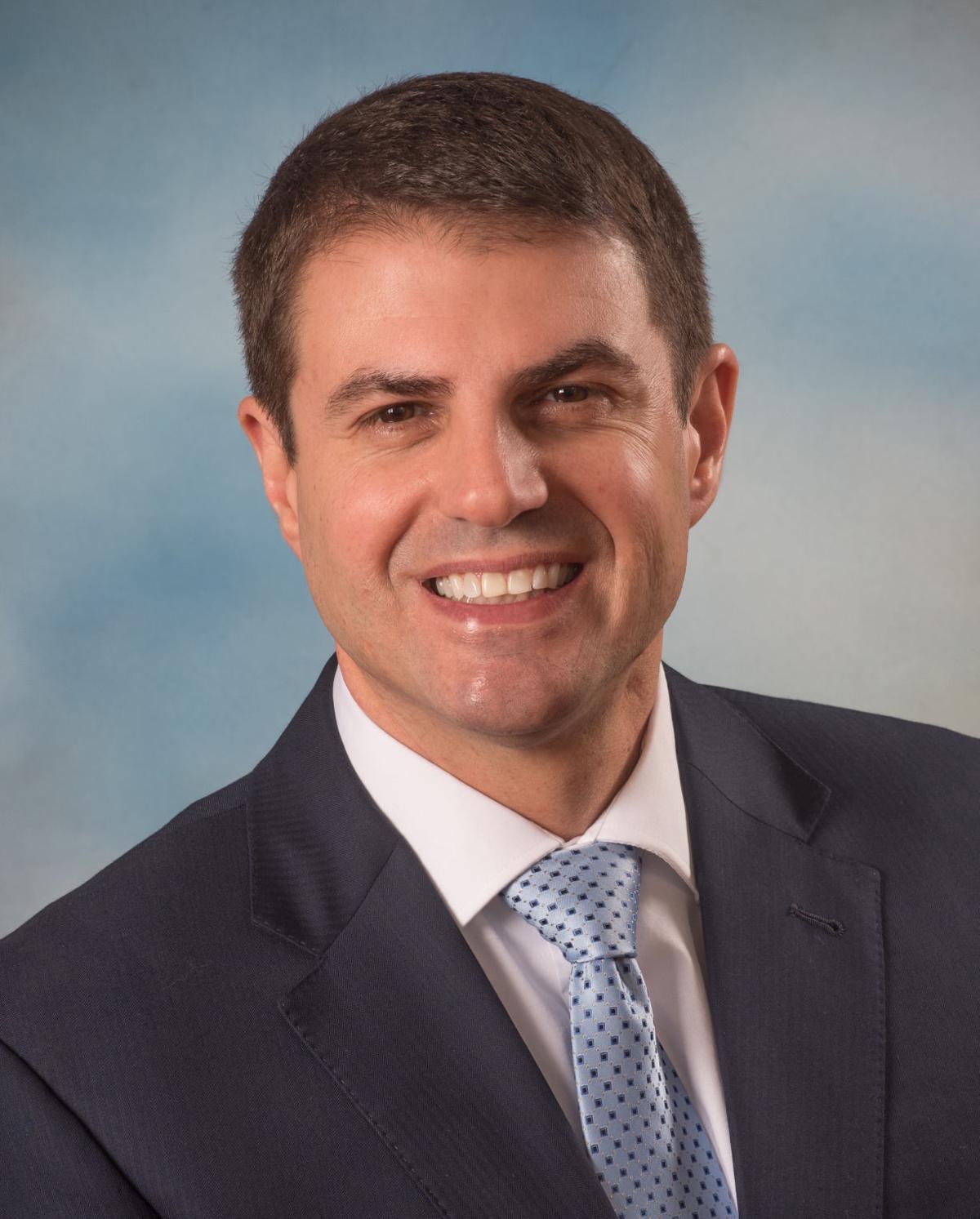