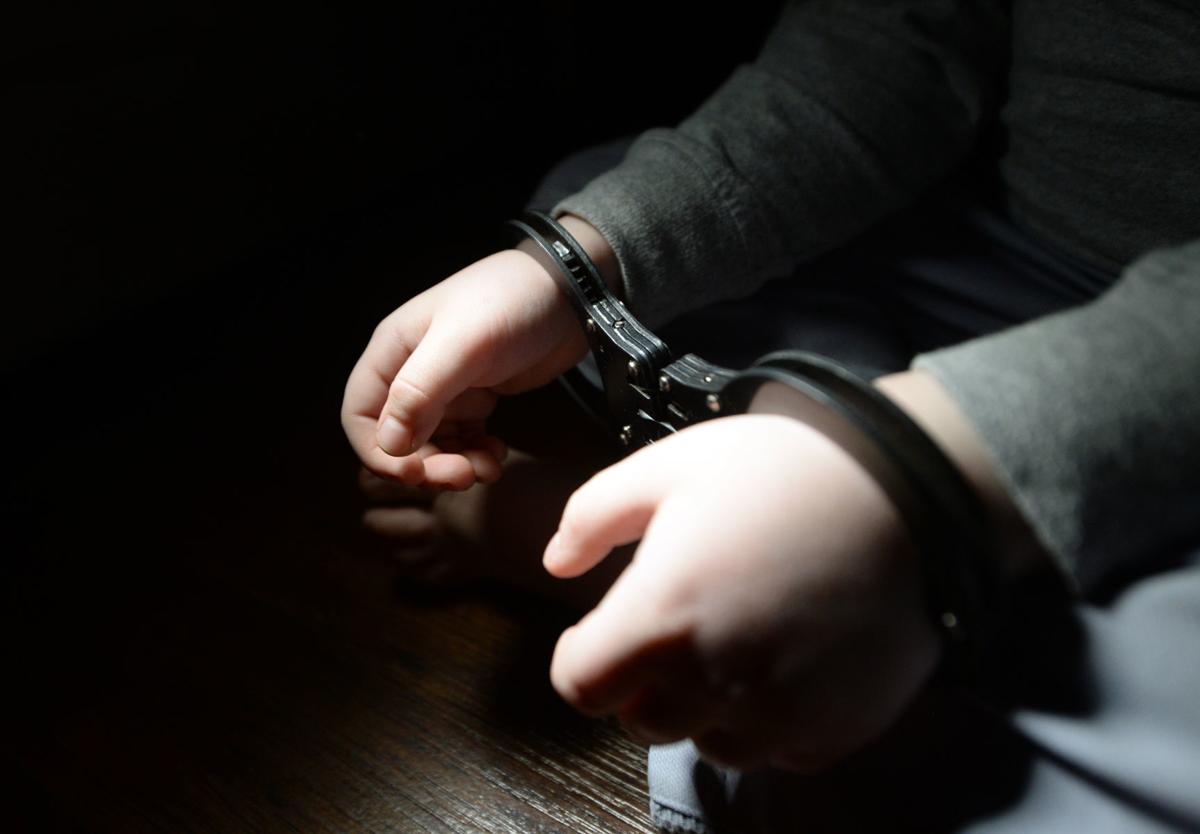 More than 400 youth were charged in adult court in Pennsylvania in 2017 because of a law passed in 1995.

On any given day, dozens of children ages 14-17 are housed in adult jails in counties across Pennsylvania while facing charges in adult court.

Most will see their cases dismissed or moved to juvenile proceedings, but not before they spend weeks, months or even years locked up with adults, according to a review of court records conducted by The Sentinel.

In 1995, the Pennsylvania Legislature passed Act 33, which requires people between the ages of 15 and 17 charged with certain felonies — like robbery or aggravated assault — to be charged in adult court if they meet certain requirements, such as the use of a weapon during the alleged crime.

Anyone younger than 15 charged in the same cases will be sent through the juvenile system.

Prior to Act 33, criminal homicide was the only charge ranking above infractions like traffic tickets that automatically pulled people younger than 18 into adult court.

Lauren Fine, co-founder and co-director of the Youth Sentencing and Reentry Project, said the passage of Act 33 in 1995 proved to be pivotal in how juvenile cases are handled.

Fine’s organization provides services to help youths transfer out of the adult system and into the juvenile system.

“None of our work is done without recognition that there is harm caused in every one of these cases ... [but] we’re still talking about children,” Fine said. “We don’t allow children of this same age to vote or even buy cigarettes or make other decisions that have long-lasting effects, and we do that for a reason and that’s because young people are not fully developed, their brains are not fully developed, and we’re holding them accountable for behavior that doesn’t actually reflect where they are in life.”

Act 33 came at a time when the national conversation about crime in America focused mainly on rising violent crime rates and the myth of the “super predator,” a now-debunked theory that a new generation of young people was somehow more violent or dangerous than prior generations.

“I think that as you look across Pennsylvania, when you look at the statistics on crime ... people are fed up with violent crime, and they are particularly fed up with violent crime that has been committed and continues to be committed in this Commonwealth by juveniles,” Sen. Michael Fisher, who introduced the bill that became Act 33, said on the state Senate floor in 1995. “The young thugs across this Commonwealth who have held people hostage in their homes and in their streets and in their neighborhoods will come to an end. Hopefully, it will be somewhat abated by the passage of this legislation.”

As Fisher stated, the bill was aimed at addressing rising violent crime rates, which rose sharply in the United States beginning in the 1970s through the 1980s, according to the FBI Uniform Crime Reporting System.

The violent crime rate reached its pinnacle in 1991 — four years before the passage of Act 33 — and has fallen precipitously ever since, according to the FBI.

But the law remains in place (with similar versions in other states), and in 2017, it resulted in more than 400 children ages 14 to 17 in Pennsylvania being charged with criminal offenses in adult court, according to an analysis conducted by The Sentinel of more than 240,000 criminal dockets filed in the state.

This chart shows the rate of criminal charges filed against youths in adult court in Pennsylvania in 2017 by county.

Black youths were 10 times more likely to be charged and convicted in adult court than their white counterparts, The Sentinel found.

Roughly two-thirds of all youth cases were ultimately dropped or sent to juvenile court after being charged in adult court, according to court records.

This chart shows the rate of criminal convictions or active prosecutions of youths in adult court in Pennsylvania in 2017 by county.

However, most of the juveniles charged in adult court spent time in adult jails.

Fine said youths in Philadelphia on average spend several months in jail before being moved to juvenile proceedings ... some spent years in jail.

In 1995, Fisher argued that trying and sentencing children who committed “adult crimes” in adult court would be “rehabilitative” and help deter other youths from offending.

Research on the direct file laws that arose from the 1980s and 1990s found neither of those assertions to be true.

According to the U.S. Office of Juvenile Justice and Delinquency Prevention, these laws have little to no deterrent effect on children as a group and can actually increase criminal involvement for youths sent through the adult system.

Multiple studies found young people who were tried in adult courts are more likely to be arrested and be arrested more quickly and frequently than similar young people sent through the juvenile system, according to the OJJDP.

A 2003 study found youths charged as adults in Pennsylvania were twice as likely than similar youths sent through the juvenile system to be rearrested within 18 months.

Several factors play into these outcomes including the long-lasting negative effects of a criminal conviction, a sense of resentment and injustice felt by the youths tried and punished as adults, learned criminal behavior from being incarcerated with adult offenders and the decreased focus on rehabilitation in the adult criminal justice system, according to the OJJDP.

Fine said a core tenant of the juvenile system is the rehabilitation of the child whereas the adult system focuses much more heavily on punishment.

Even just holding young people in adult jails can have serious negative consequences.

“These kids are ending up in juvenile court anyway,” Fine said. “Why are we exposing them, traumatizing them and holding back their education [by holding them in adult jails]?”

Fine said adult jails are not designed to handle the needs of young people or properly equipped with tools to discipline them.

What may be an effective means of discipline for an adult, like segregation, can be damaging to a child, she said.

“Even the most well-meaning and well-equipped staff are functioning in a system that is ill-equipped for the young people who are being treated in it,” Fine said.

Along with requiring certain cases to be charged in adult court, Act 33 of 1995 makes the assumption that these young people should be in adult court and places the burden on them to prove why they should be moved to juvenile court.

This fundamentally changes the way the system operates, Fine said.

Traditionally, prosecutors have the option to request a youth be brought into adult court. In Pennsylvania, district attorneys can file a discretionary waiver for any youth aged 14 or older who is charged with a felony.

The burden, however, is placed on the prosecution to prove that the child cannot benefit from treatment or supervision and is not able to be rehabilitated.

Act 33 flips that burden for some youths and requires that they provide evidence that it would be in the public interest to transfer their case to juvenile proceedings. This can be costly, and the pressure imposed by the adult system can push youths to plead guilty and carry an adult conviction for life or offer to plead guilty in exchange for the transfer to juvenile court, Fine said.

“We don’t allow children of this same age to vote or even buy cigarettes or make other decisions that have long-last effects, and we do that for a reason and that’s because young people are not fully developed.” Lauren Fine, co-founder and co-director of the Youth Sentencing and Reentry Project

This series was produced as a project for the 2018 John Jay/Tow Juvenile Justice Reporting fellowship.

This week The Sentinel takes a closer look at how juveniles get charged in adult court and what happens when they do.

Friday: A look at how Pennsylvania’s direct file law brings hundreds of youths into adult jails every year

Weekend: How offenses committed as juveniles land some on the sex offender registry years later

Monday: What happens when a juvenile is brought into an adult jail

“We don’t allow children of this same age to vote or even buy cigarettes or make other decisions that have long-last effects, and we do that for a reason and that’s because young people are not fully developed."

Kids in Cuffs: How juveniles get charged in adult court

Welcome: A look at crime statistics by municipality in Cumberland County

Here are the crime rates for Cumberland County in 2018.

Juveniles detained in adult prison are more likely to die by suicide and be sexually assaulted in prison, and have decreased access to school and mental health services, the bill's sponsor said.

More than 400 youth were charged in adult court in Pennsylvania in 2017 because of a law passed in 1995. 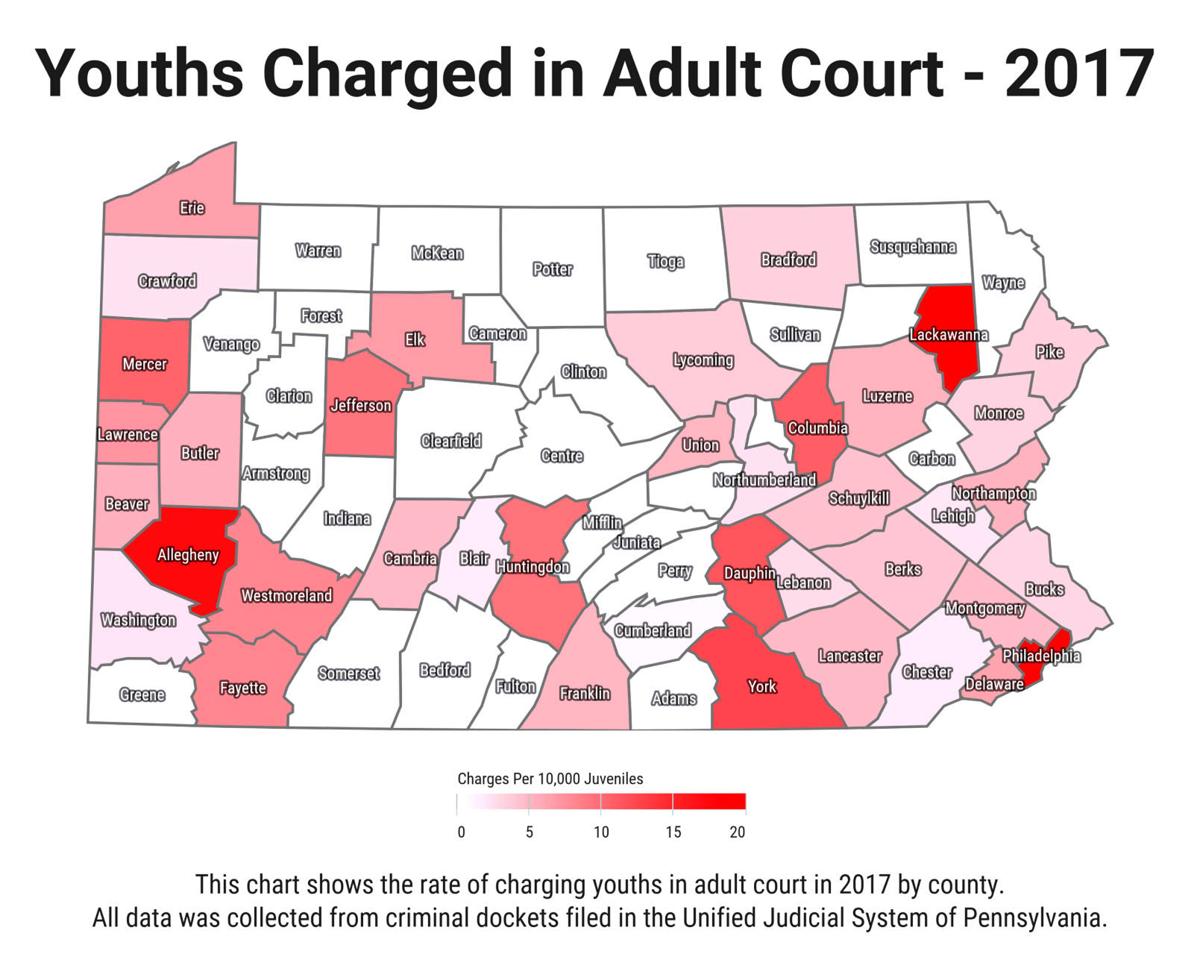 This chart shows the rate of criminal charges filed against youths in adult court in Pennsylvania in 2017 by county. 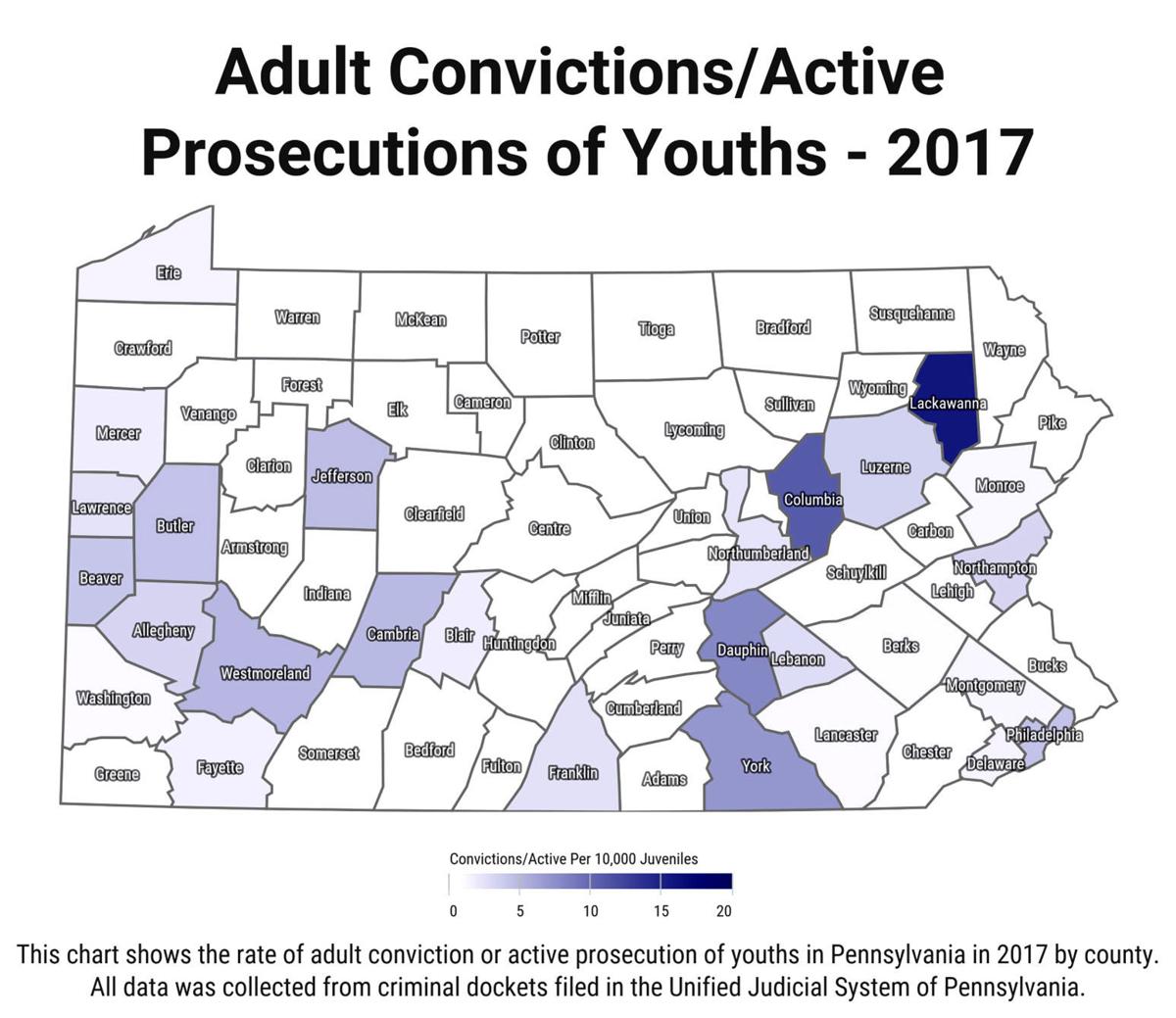 This chart shows the rate of criminal convictions or active prosecutions of youths in adult court in Pennsylvania in 2017 by county. 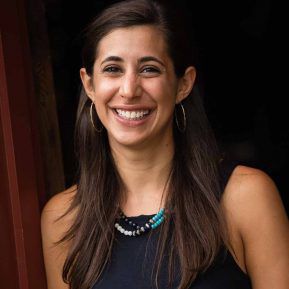