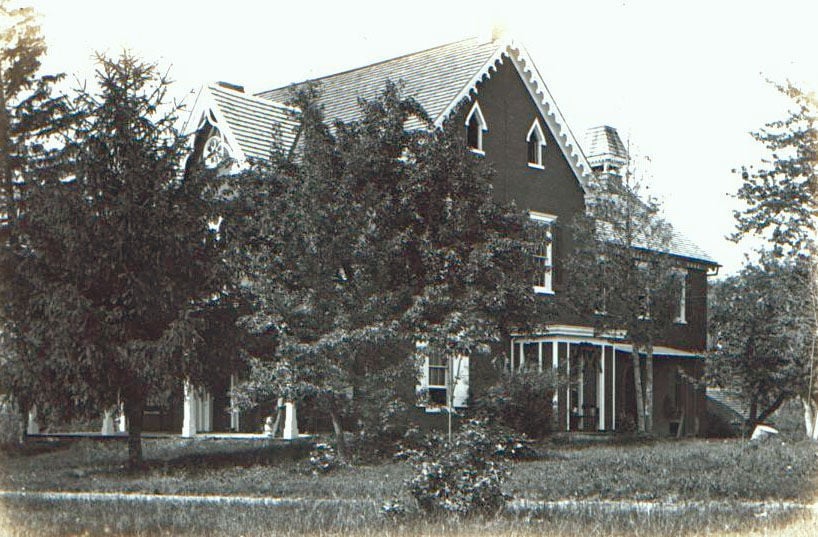 This photograph from 1900 shows the old farmhouse that could be developed into a legacy center for descendants for the Carlisle Indian Industrial School. Located along Post Road on the east side of Carlisle Barracks, the house was spared demolition and is now being maintained by Carlisle Barracks. 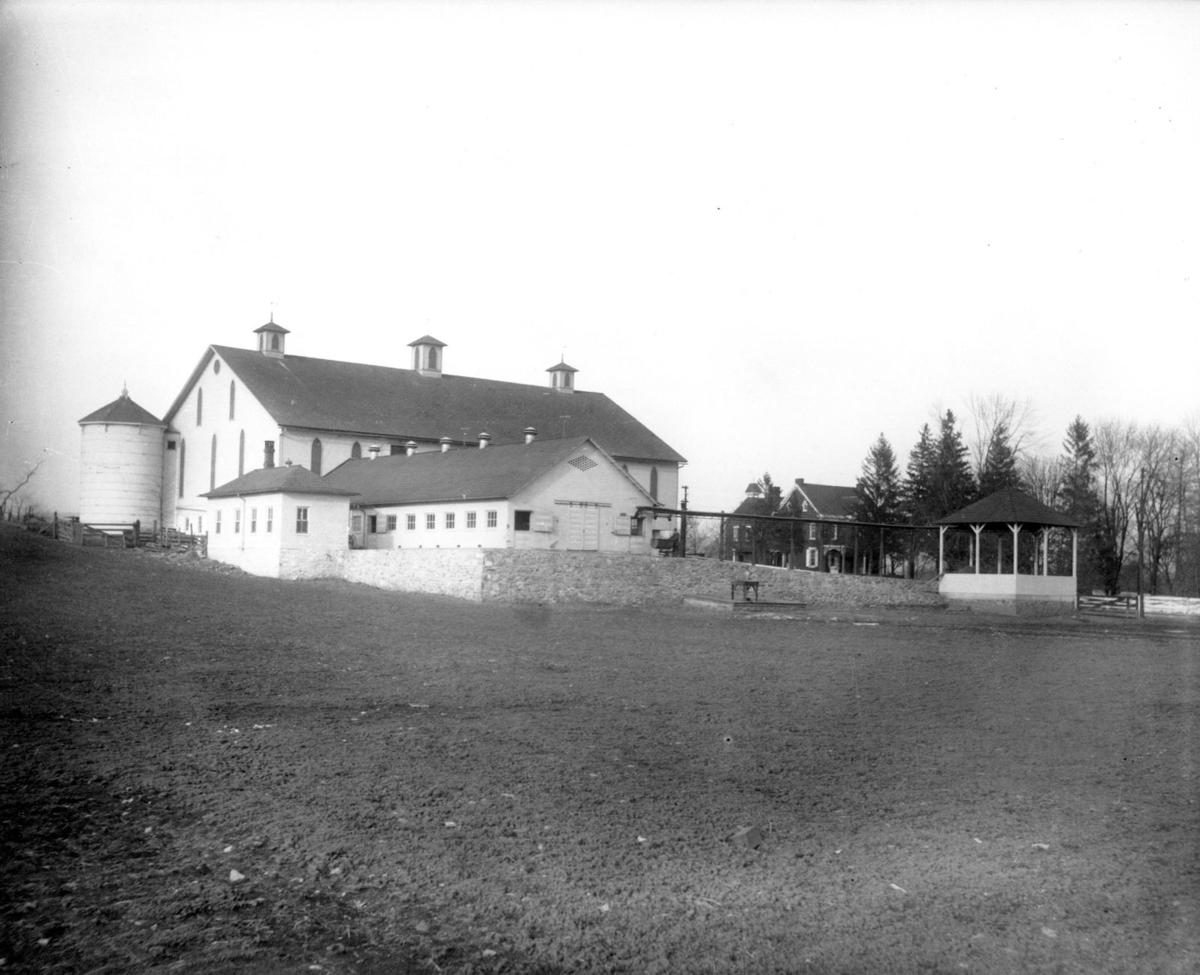 This photograph shows one of the Carlisle Indian Industrial School farms. The farmhouse to the right of the barn still stands and may be converted into a legacy center for descendants of Indian school students.

Carlisle was the place where Indian culture was supposed to end.

If everything had gone according to plan, native youths would have completely strayed from tribal influences and be assimilated into the white man’s culture.

The tribes would have suffered a slow strangulation of their languages and traditions brought on by the example set by the Carlisle Indian Industrial School, the first off-reservation boarding school in the U.S.

Kill the Indian … Save the man, was the philosophy behind the movement. Most everyone underestimated the spirit and resolve of Native Americans to hold fast to their identity despite the intergenerational trauma.

“We would not be here but for the sacrifices that they made,” said Louellyn White, an associate professor of First Peoples Studies at Concordia University in Montreal, Quebec.

White is co-founder of a coalition of Carlisle Indian School descendants who want to convert an old farmhouse on Carlisle Barracks grounds into a legacy center for visitors. Located along Post Road on the eastern edge of the installation, the farmhouse was used as student living quarters and as a classroom to teach them agriculture.

The roots of the coalition date to an effort to spare the farmhouse from demolition to make way for new housing on post. That effort was successful, and though vacant, the house is being maintained by the Army while the coalition organizes. The first step in the process was the posting of an online survey that asked descendants for input on uses of the farmhouse.

“We had a pretty good response … 124 folks responded,” White said. The survey also asked questions on what family ties the person had with the Carlisle school and what kind of stories have been passed down through the generations since the school officially closed on Sept. 1, 1918, she said.

About 5 percent of respondents had a parent attend the Carlisle Indian School. The majority of the others had either a grandparent or great-grandparent. “The experiences that were passed on varied along a spectrum positive, negative and everything in-between,” White said. Overall, there was a sense of encouragement with “please make this happen” being among the comments.

The overarching goal of the farmhouse project is to offer descendants a platform on how to maximize the space. One direction may be to develop a place where Carlisle Indian School descendants can go to grieve, reflect and honor the lives of the estimated 8,000 native youths who attended the school from 1879 to 1918.

“There is no place after they go to the cemetery,” said White referring to the graveyard along Claremont Road where about 180 students are buried. She said that from the Native American perspective, there is still a sense of government oppression in that Carlisle Barracks is a high security installation with close surveillance and strict rules of conduct.

Developing the farmhouse into a refuge for visitors could help heal the generational trauma experienced by Native Americans coping with the legacy of Carlisle and other boarding schools, White said. She will be among the Carlisle descendants who will attend a conference in early October regarding the school and its impact.

Her hope is the conference could be used as a rallying point to draw in volunteers to serve on a farmhouse coalition board of directors. “Carlisle descendants are scattered across the country,” White said. “After Carlisle closed some of the tribes lost their land base and federal recognition.”

Without that recognition, tribal formality dissolved and the people scattered, making it difficult for anyone to get an accurate assessment on just how many Carlisle descendants live today.

People from 47 distinct tribal nations responded to the online survey, White said. While most reside in the U.S., four were from Canada and one was from Scotland.

As White coordinates the building of a coalition, Sandi Cianciulli serves as president of the Carlisle Indian School project, which wants to develop a legacy center elsewhere in the Carlisle area.

“We are working on an investor group of tribes to secure a site off the Barracks where we can build a center devoted specifically to the boarding school era,” Cianciulli said. “The era started in Carlisle and it is important to us to have the center at the place where it actually happened.”

The goal is to develop a center on land close to Carlisle Barracks and to base its interpretative history and business model on the U.S. Army Heritage and Education Center. Once operational, it could have exhibits on the Carlisle Indian School band, football team and students who joined the military.

This center will include a commercial component that would draw in contemporary tribal businesses, Cianciulli said. “We have made continuous progress towards that end. We are moving ahead. We are starting to meet direct with the tribal council.”

Logistical concerns form part of the reasoning behind locating this center off-post. With tighter security protocols, it would be too difficult for most visitors to conveniently access Carlisle Barracks, Cianciulli said. She said there is limited parking and program space where the farmhouse is located, and that building would need to be brought up to the current building codes.

Locating a larger more public center off post would open access and put more of the focus on the overall impact of the boarding school experience, Cianciulli said. “I just see this as a monument to the Indian spirit, that even in the worst case scenario, you can survive and there is always hope.”

With a youth suicide rate higher than the national average, Native American youths today need a source of inspiration to build their self-worth, she said.

A heritage center could send the message that the lessons of the Carlisle Indian School are not just local and Native American history, but national and international history, Cianciulli said. She said the eternal message is to not target or scapegoat people or to force children away from families.

With monuments under more scrutiny and leaders under more pressure to take action, Dickinson College professor Matthew Pinsker said the process for evaluating statues and any decision about public monuments needs to be deliberative.

This photograph from 1900 shows the old farmhouse that could be developed into a legacy center for descendants for the Carlisle Indian Industrial School. Located along Post Road on the east side of Carlisle Barracks, the house was spared demolition and is now being maintained by Carlisle Barracks.

This photograph shows one of the Carlisle Indian Industrial School farms. The farmhouse to the right of the barn still stands and may be converted into a legacy center for descendants of Indian school students.